On October 1, 1932 Juan Trippe ordered the first S-42s from Sikorsky Aircraft. This big Sikorsky flying boat (along with the Martin M-130, ordered around the same time) marked the beginning of Pan Am’s true oceanic potential.

We’ve seen a great many photos of the exterior and interior of the magnificent Sikorsky S-42, but this description by writer S. Paul Johnson from Aviation and published in the Pan American Air Ways magazine March 1934, provides much finer detail about the interior of the plane and how it was constructed. You probably wouldn’t find rubberized horsehair on any modern aircraft!

"…the S-42 differs from other Sikorsky designs in that the tail surfaces are carried directly by the hull and not on open booms. This feature necessitated considerable revamping of control surfaces and their connections and also made for a somewhat longer hull and more spacious cabin accommodations.

On going aboard the S-42 through the after hatchway, its yacht-like proportions are strikingly in evidence. A short Jacobs’s ladder brings one over the side and onto broad rubber-covered walkways (formed by the open hatch covers laid back onto the deck). A substantial handrail (unshipped in flight, of course) leads down a solid stairway of the companionway into the cabin.  A center aisle give access to all passenger compartments and to the cockpit forward. Bulkhead doors are all watertight, making it possible to seal off any desired hull section in case of damage to the plating. Passenger seats are adjustable and are hung from the bulkheads without legs to the floor. Two completely equipped toilets and washrooms open off the aisle adjacent to the companionway. Steward’s equipment, life rafts, auxiliary fire-fighting equipment and a combination mail and baggage compartment occupy the space in the hull between the hatch and the tail.

Walls and ceiling in passenger compartments are lined with walnut-balsa wood veneer panels, all removable for inspection of underlying structure. Pads of rubberized horsehair between the liner panels and the bulkhead panels dampen out vibration and assist in the sound insulation.  Three circular windows are provided in each side of each compartment, all fitted with shatterproof glass and non-openable. Ventilation comes from two overhead ducts with four adjustable registers in each cabin section. Fresh air is taken through a screened opening in the nose of the “tower” connecting hull and wing, and delivered through a labyrinth type water separator to the ducts at a maximum rate of 42 cu. ft. of air per passenger per minute. Since the boats are intended for tropical operation, no heating systems have been installed. Control cables pass through the cabin in conduits alongside the air ducts. They may be opened quickly and easily for inspection. Floor panels are also removable in small units to give access to the hull framing. The cross-frames under the floor between the bulkheads have been spaced far enough apart so that a man may go down into the bottom without difficulty, and stringers are arranged so that no water pockets can form between bulkheads.

The chief pilot is on the left and co-pilot on the right in the usual manner. The radio operator and his apparatus occupy the space behind the co-pilot and the flight mechanic is stationed behind the pilot. An interesting sub-division of functions of the instruments has been worked out. Only the essential navigating and engine control instruments (tachometers and manifold pressure gauges) are on the pilot’s boards. The multiplicity of small engine indication instruments (such as pressure and temperature gauges, fuel gauges, etc.) are mounted on the rear cockpit bulkhead at the mechanic’s post. The pilot in the flight is thus concerned only with flying instruments and the mechanic has the responsibility for the correct operating conditions for all four engines. The net result is a great simplification in instrument installations and a considerable contrast to the maze of the dials and indicators that usually face the pilot and co-pilot on multi-engined airplanes. The throttle flap and adjustable pitch controls, ignition switches, master switches, and the fire extinguisher controls are suspended from the cockpit roof overhead within easy reach of both pilots. The selective throttle arrangement worked out for the S-40 has also been applied to the S-42 in somewhat improved form. A door in the forward cockpit bulkhead gives access to the anchor winch and to a hatchway in the forward deck.  Just aft of the cockpit a companionway leads to the outside of the hull on the port side.  Removable panes in the wall of the passageway give immediate access to the back of the mechanic’s instrument board. On the other side of the passage sliding drawers are provided for two 12 volt storage batteries. Each is charged by a separate generator."

Cutaway of the Brazilian Clipper - 822M

"Flying Time between the United States and the Argentina Will be Reduced by Two Days When the Giant Sikorsy S-42 Speedy Clipper Plane Goes into Service: Four Engines, Rated at 3,000 Horsepower, Drive the Loaded Ship at Speeds in Excess of 155 Miles per Hour

Greater Safety for Ocean Air Service Is Offered by the Giant Sikorsky S-42 Which Carries Thirty-Two Passengers and 2,000 Pounds of Cargo, Including Mail: Low Landing Speed, Powerful Emergency Flares, Inflatable Life Rafts, Radio and Special Anchors Are Some of the Safety Features" 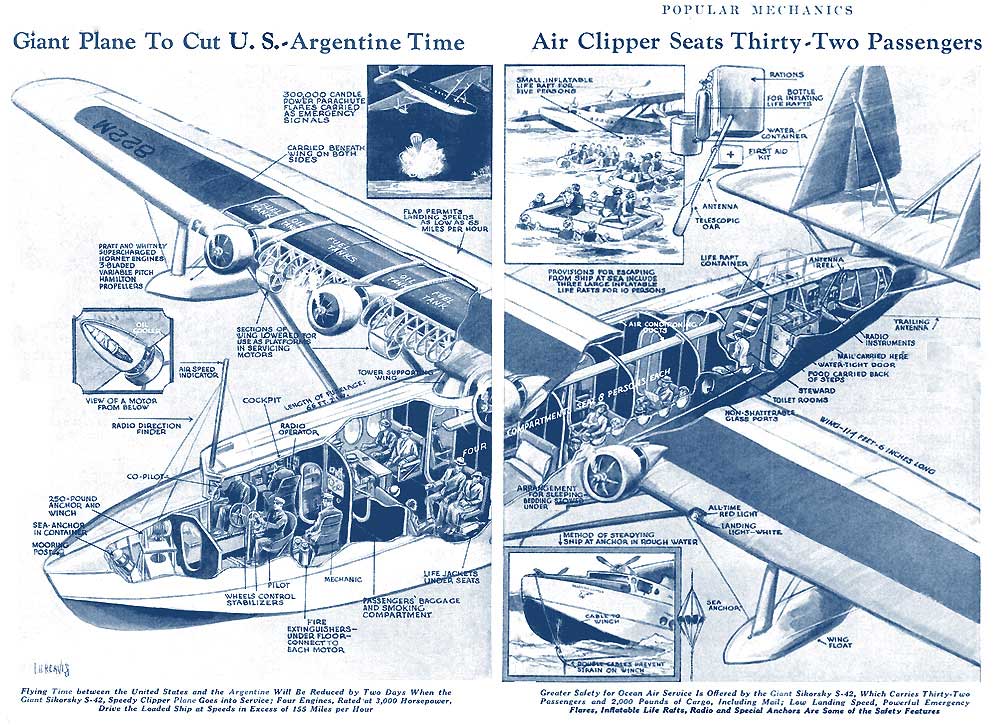