Echoes of Wake Is.

Bonita (Bonnie) Gilbert is the author of Building for War: The Epic Saga of the Civilian Contractors and Marines of Wake Island in World War II (Casemate Publishers, 2012). The book details the rapid naval development on the tiny Pacific atoll – also home to a Pan American clipper base – and the shocking descent into war in December 1941. The Americans made a heroic stand, holding Wake through a punishing sixteen-day siege, but finally fell to the Japanese. Bonnie’s father and grandfather were contractor personnel on Wake in 1941, and their letters and stories add personal perspective to the historical account. Bonnie has an MA in history from University of Oregon and teaches history at North Idaho College. Website: https://bonitagilbert.com   Email: This email address is being protected from spambots. You need JavaScript enabled to view it. 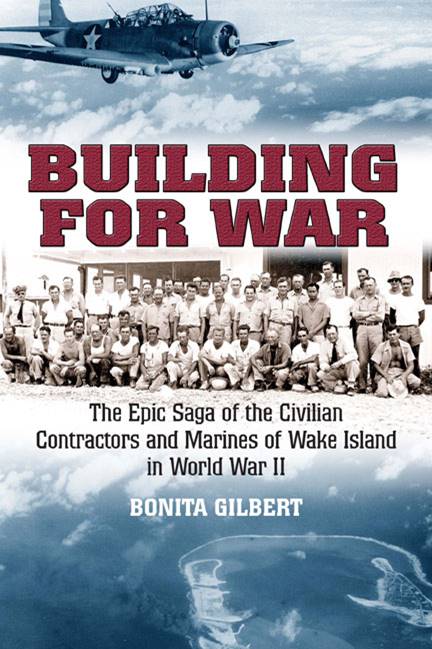 Cover of "Building for War" by Bonita Gilbert

Peale islet, the northwest arm of the Wake Island atoll, bustled with activity in late 1941. Here Wake’s Pan American station served the trans-Pacific clippers and their overnight passengers while American contractors scrambled to build permanent facilities for a naval air base. Soft Hawaiian music on the radio, quiet conversations, and tinkling cocktail ice in the hotel lobby contended with the ring of hammers and roar of engines down the road. Behind it all was the constant thud of surf on the windward coral reef. When I visited Wake Island seventy years later, I marveled at how Mother Nature had reclaimed Peale from both peacetime activity and the destructive war that followed. Now dense vegetation engulfed the deserted islet, and the only sound to be heard was the thud of surf on the reef. Pan Am Dock and gazebo on Peale (US National Archives)

Wake Island is an isolated, coral-crowned seamount in the mid-Pacific, two thousand miles west of Hawaii across the International Date Line. The V-shaped atoll is comprised of three islets – Wake, Peale, and Wilkes – surrounding a turquoise lagoon opening to the west. Tip to tip distance is eight miles with a total land mass of about two and a half square miles, none of it higher than twenty feet. The fringing coral reef, rich with marine life, extends a few hundred feet offshore, slopes down to about eighty feet, and then abruptly drops off to deep blue, two miles down to the ocean floor. In 1941 a navy captain described it as a “gigantic toadstool on a slender stem.” 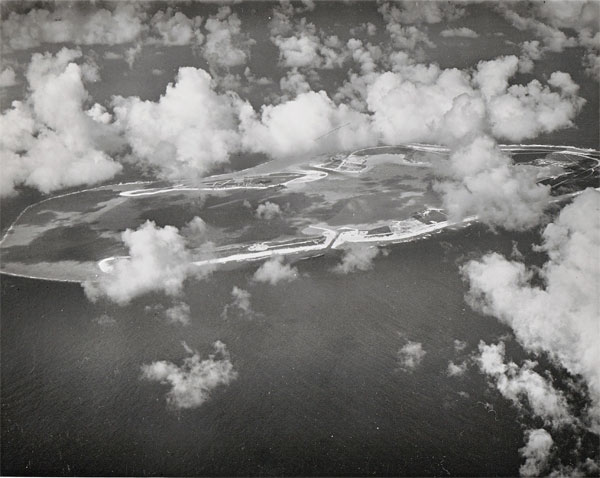 Claimed by the United States in 1898, the uninhabited atoll with no fresh water and no natural harbor remained unused until it caught the attention of both Pan American World Airways and the U. S. Navy in the mid-1930s. Pan Am applied for the Pacific airmail contract and leases on Wake and two other remote islands to stage a clipper route between San Francisco and the Philippines, eight thousand miles west. The navy, still restricted by treaty from fortifying American island possessions, needed a “back-door” opportunity to survey those same islands for military use as tensions with Japan rose. The airline received approval in early 1935 and quickly dispatched a ship loaded with supplies and workers to build start-up stations and blast seaplane runways on Midway, Wake, and Guam. In November 1935 clippers loaded with sacks of airmail (at thirty-five cents a half-ounce, compared to three cents an ounce for regular mail) began flying the full route to Manila, soon extended to Hong Kong. 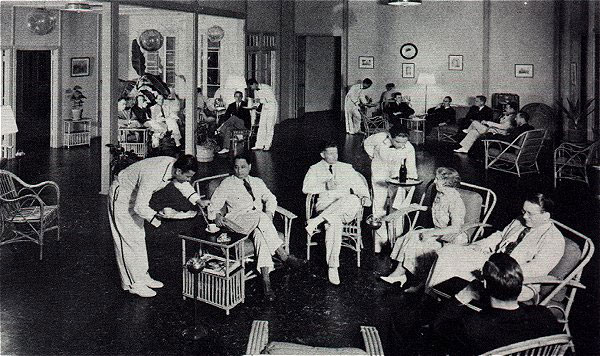 On Wake Island’s Peale islet, the Pan American complex expanded to include a sleek new hotel and dining room and in October 1936 began serving overnight clipper passengers. Guests could row out into the lagoon in a glass-bottomed boat, play tennis, go birdwatching as thousands of terns, bosuns, boobies, and frigate birds put on their daily show, or just relax in the hotel’s casually elegant lounge where white-coated waiters offered cigarettes and cocktails before dinner. Within a few years the Wake station had grown to nearly a hundred resident staff, including the station manager and hotel manager (and their wives), radio operators, mechanics, carpenters, cooks, and dozens of young Chamorro (Guamanian) servers and workers. Crushed coral paths connected the hotel, power house, fire station, two windmills, weather station, red-roofed cottages and other structures, and the radio direction finder, visible from a distance by its tall goalposts. Always busy, staff members leapt to their assigned stations when the siren sounded several times a week, signaling an incoming clipper. 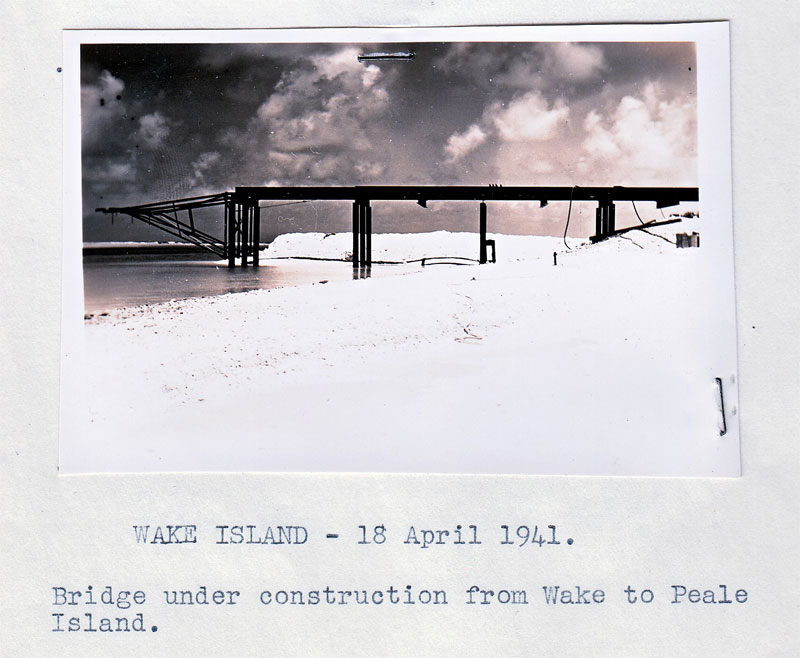 In 1937 a travel writer booked the round trip to Hong Kong and adjusted her schedule to lay over on Wake for a week on the return. At her first step off the westbound Hawaii Clipper in the Wake lagoon she was appalled at the atoll’s “bony flatness” and regretting the borrowed $1845 clipper fare (astonishingly equivalent to over $35,000 today). Depressed and drenched by rain as she trudged down the long pier toward shore and the hotel, she was startled when two snow-white terns approached to flutter over her head, encircling her in a “silky halo.” This marked the beginning of Dorothy Kaucher’s love affair with Wake Island. A week later she stepped again onto the long white pier, now eagerly anticipating her extended stay. Over the coming days Kaucher enjoyed the warm camaraderie of Pan Am staff members and walked all of Peale, picking through the weather-beaten Coral Gables camp of the 1935 Pan Am pioneers and remnants of a decades-old Japanese fishing camp. With the Pan Am doctor as tour guide she sailed across the lagoon to Wilkes where the company’s ships landed to offload cargo, snapping pictures with Minnie, her little camera. Another day they crossed Peale channel in a wobbly barrel boat to explore untamed Wake itself. As they forged through the dense brush, surrounded by squawking, flapping birds, the doctor told her that she was only the second lady to ever set foot on Wake islet, the first being a stranded opera singer from the 1866 shipwreck Libelle. The harrowing story of the Libelle, the wildness of Wake, the sharks prowling the reef, and the immensity of the sea contrasted mightily with the carefully tended little compound on Peale, to which Kaucher was glad to return each night. In her room, switching on a lamp and taking a shower before dinner, she was amazed that each lightbulb, every bar of soap, wicker chair, and crisp celery stick had been shipped across thousands of miles of open sea to this tiny dot of land in the mid-Pacific.

Meanwhile during the late 1930s, the navy engineers had conducted quiet surveys of Wake and other remote islands and, when restrictions were lifted and Congress funded a massive military build-up in the Pacific, the U. S. Navy was ready to step through the front door. Among the new projects were naval air bases on both Midway and Wake. The first contingent of navy contractors, including my grandfather, Harry Olson, arrived on Wake in early January, 1941, beaching their heavy equipment and supplies in Pan Am’s tiny landing cove notched into Wilkes islet, across the lagoon from Peale. The contractors and airline got off to a good start with a warm welcome from Pan Am staff, who radioed the ship’s successful arrival to Pearl Harbor as the newcomers pitched in to clear recent typhoon damage to the airline’s own landing facilities on Wilkes. The clipper airmail service was vital to the homesick workers whose numbers grew as more ships arrived during the coming weeks. A handful of superintendents including Olson enjoyed an open invitation to the Pan Am cocktail lounge. For the hundreds of other workers the “no booze, no dames” rule stood firm: the pleasures of Peale were strictly off limits. 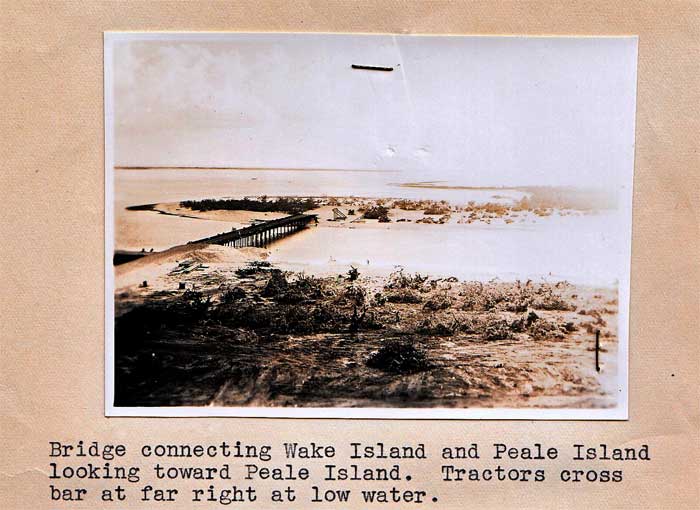 My grandfather’s frequent letters home were filled with the challenges of the job, observations on Wake’s unique environment, philosophical ruminations, and advice for his family, including my future father, Ted, who joined the Wake workforce in June of 1941. Olson’s occasional descriptions of pleasant evenings spent over at “Pan Air” attest to the mutually beneficial relationship between the airline and contractors and the special privileges afforded him in particular. While he missed meeting famous clipper passenger Ernest Hemingway, he did enjoy drinks and conversation with many other passengers and over time became good friends with Pan Am staff. The “touch of civilization” on Peale made the grueling work on Wake Island bearable for Harry Olson. 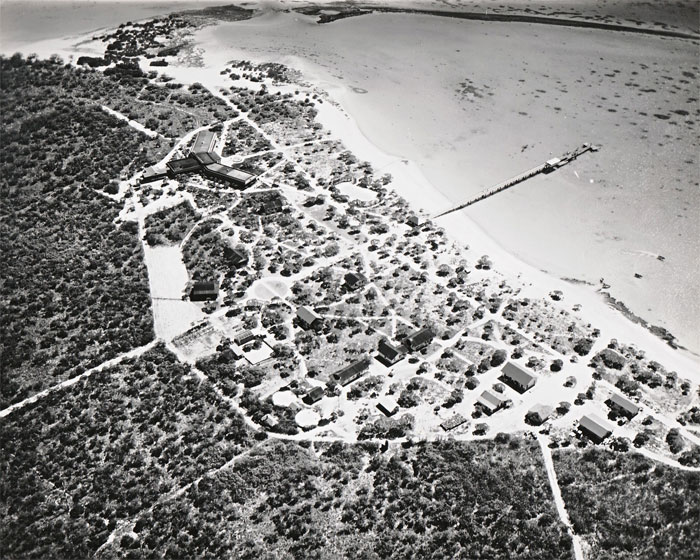 By the spring of 1941 graders had extended their road from Camp 1 around to the northwest end of Wake islet where construction was underway on a new camp complex to house and feed the masses of incoming workers. The contractors built a steel-based wooden bridge crossing the channel to Peale where the permanent structures of the naval air base were to be located. Pan Am’s Wake Island station would lose its charming isolation, yet with all of the new action in the Pacific, business was booming for the airline. It was a dangerous place to be a woman, however. In addition to two Pan Am wives who stayed on Peale, the wife of Dan Teters, general superintendent for the contractors, took up residence in their new cottage on Wake’s north-facing beach. One of Olson’s letters describes how she couldn’t leave the house without either himself or Teters as escort, didn’t dare stay alone at night, and couldn’t even come into the camp areas “as lot of the fellows run around naked” for fear of molestation or even rape. Peale itself would soon be a danger zone when the contractors moved their operations in there.

As the months went by the navy project kicked into high gear with over a thousand sweating workers raising new structures, laying a seaplane ramp on Peale, blasting and dredging in the lagoon for a submarine base, and cutting a ship channel through Wilkes islet. Hundreds of Marines arrived to set up shore guns and defenses and to fuel the steady stream of west-bound army B-17s on the new runway. The contractors stepped up their work, confident the Uncle Sam would take care of them if war came, but the navy did order all women, including the three wives on Wake, evacuated from the outlying islands as a precaution. A week after Thanksgiving my grandfather grabbed an opportunity to take a “short vacation” to Honolulu and early on December 4, 1941, he boarded the eastbound China Clipper. On December 8 (12/7 across the International Date Line) war came suddenly and without warning to Wake Island when Japanese bombers dropped out of the skies and rained destruction on the atoll, killing dozens, including ten Chamorro workers who perished in the burning hotel. After an unrelenting sixteen-day siege, the island fell to the Japanese. The survivors, including my father, were taken as prisoners of war. 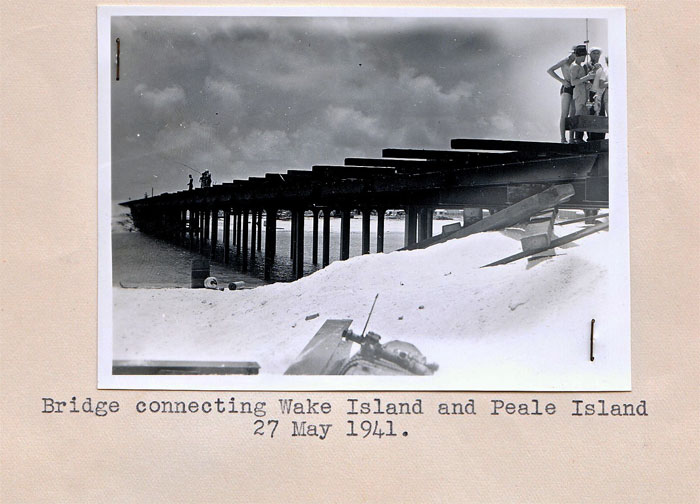 I was invited to Wake in the fall of 2011 to provide a historical tour for visiting air force generals and staff. In the days prior to their arrival, I was free to explore the atoll, which from my book research I felt I knew like the back of my hand. The bridge to Peale had burned down in 2003 and the deserted islet was left to languish while Wake hummed with military and airport activity. A short catamaran skim over the turquoise lagoon brought me to the ruins of the Pan Am dock landing and the overgrown seaplane ramp where hermit crabs skittered. Heading into the thick brush, a pair of snow-white terns suddenly hovered over me as if to welcome another stranger to the island. Bits of concrete foundation and rusted metal debris peeked out from the vines; here and there the ground dipped where bombs had cratered the surface. All was still and quiet now except for the thud of surf on the coral reef, but the air was heavy with the echoes of the past.

In 2011 Bonnie Gilbert visited Wake Island and has kindly shared her photos of her trip.