Snippets from the March 1939 Clipper newsletter, Pan Am's internal organizational bulletin, recount the Boeing-314 Yankee Clipper's christening and its first Atlantic Ocean crossing from Baltimore three weeks later. With the help of these historic photos, we've put together a close-up view of the ceremony.  Juan Trippe looks on as Eleanor Roosevelt makes a splash christening the 40-ton flying boat in Washington DC. (Photos courtesy of the Library of Congress, Harris & Ewing Collection).

Washington, March 3, 1939 -- The Yankee Clipper, 41-ton flagship of the Pan American Fleet which will carry America's colors in an international race of Transatlantic air supremacy, was christened today by Mrs. Franklin D. Roosevelt in a colorful ceremony at the Naval Air Station at Anacostia.

Several thousand wide-eyed spectators watched the smiling First Lady crack a gold-trimmed bottle over the blunt nose of the all-metal, four-motored plane, largest of the world's heavier-than-air craft, and the first of six B-314s now being delivered for Pan American transoceanic services.

Water from the seven seas, rather than the customary champagne, filled the bottle.  It splashed on Mrs. Roosevelt's face, white gloves, dark red suit and hat, but she and the officials on a barge in the river turned immediately to stand at attention for "The Star Spangled Banner."

Photo description from the Library of Congress: "The incoming tide was not taken into consideration when officials planned the christening of the giant flying boat Yankee Clipper, at the U.S. Naval Station, Wash., D.C., As a result many of the sound engineers were marooned before Mrs. Roosevelt christened the ship, March 1939." 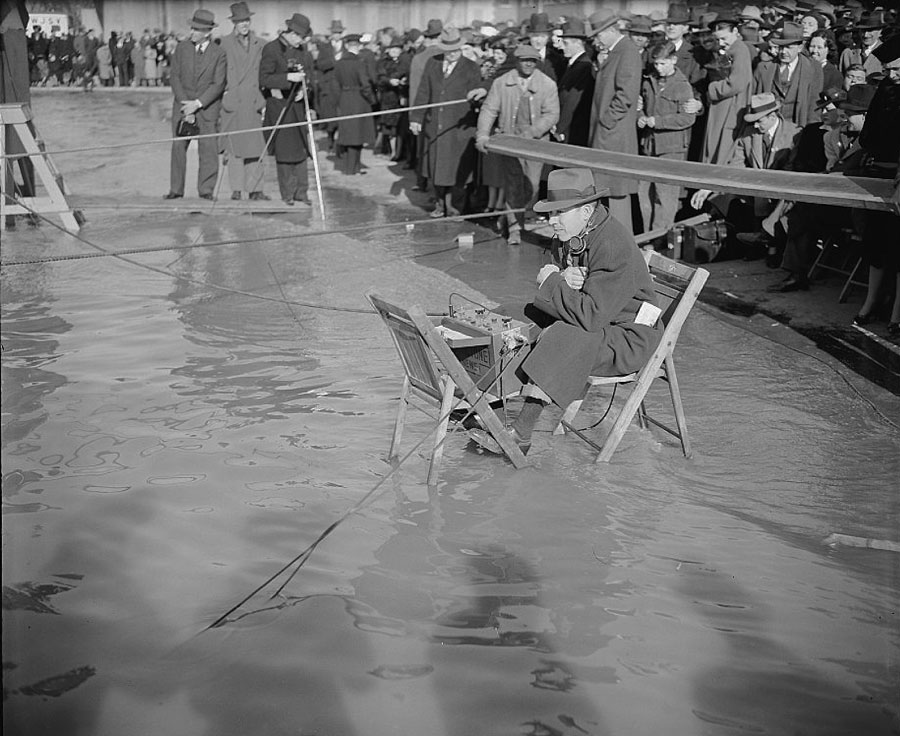 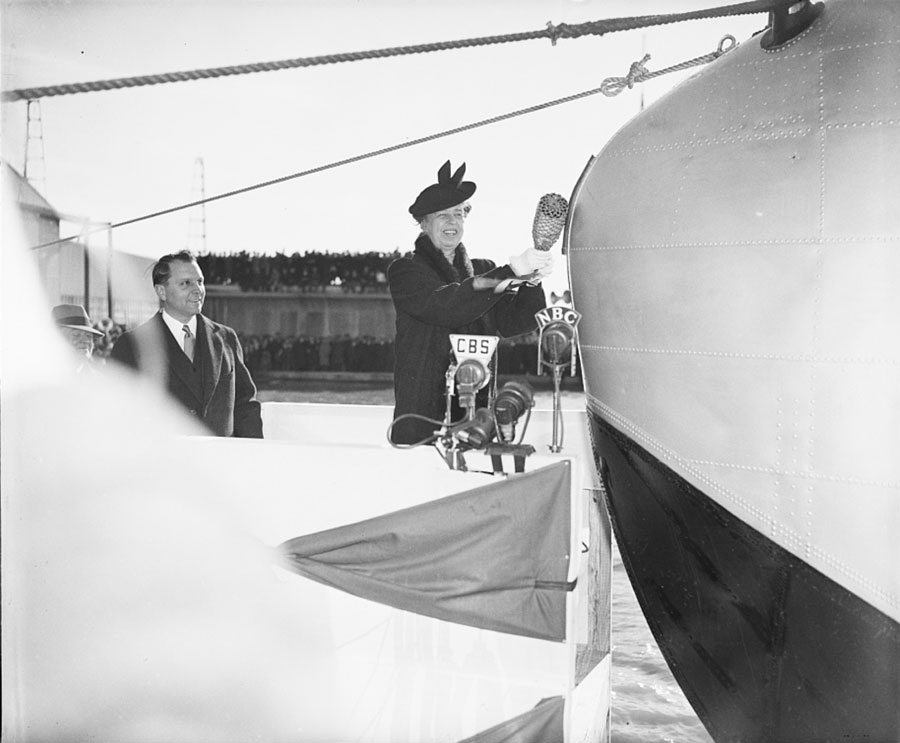 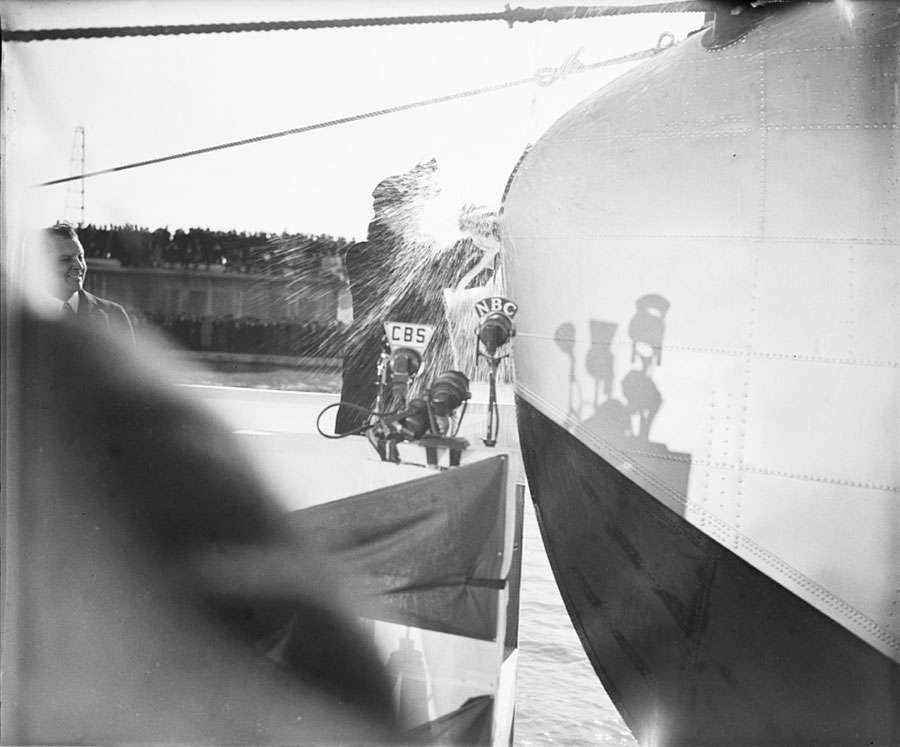 Baltimore, March 26, 1939 -- Setting out on her first Atlantic crossing, a 10,000 mile inspection flight from Baltimore to Europe and return, looking toward early establishment of scheduled transatlantic service, the Yankee Clipper, new flagship of Pan American's merchant marine of the air, was in the air at 2:34 o'clock this afternoon, carrying the greatest number of persons (21) ever to take off for an Atlantic crossing in a heavier-than-air craft.  Heading for the Azores, Lisbon, Marseilles, Southampton and Foynes, with the return journey scheduled to retrace this route, the B-314's mission was to check all the preparations that had been made at these five bases. 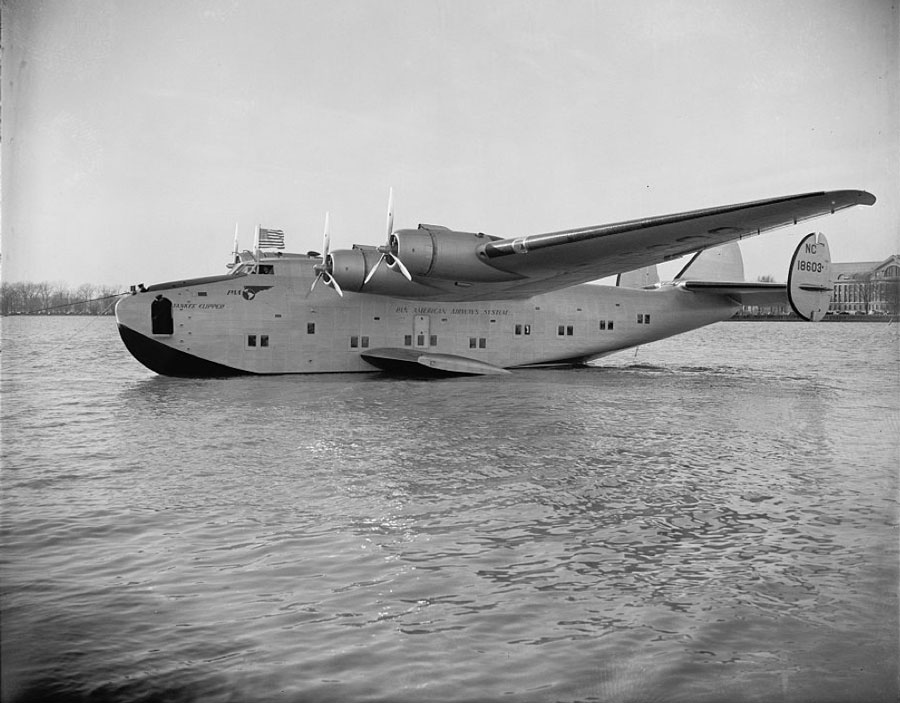 Today you can see a replica of a B-314 flying boat at Foynes Flying Boat & Maritime Museum. Read about a visit to Foynes, Communing with Ghosts, by Peter Leslie.