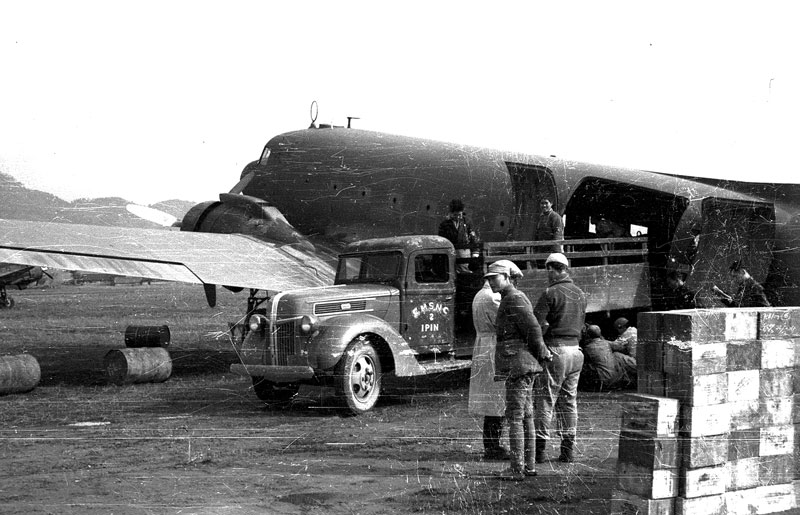 The sky may be filled with aircraft, but very few can claim the pedigree of the Historic Flight Foundation’s (http://historicflight.org/hf/ ) venerable Douglas C-47B/DC-3. Built by the Douglas Aircraft Company in Long Beach California in the summer of 1944 during World War II, she flew off that July to join the fight. Like some other C-47’s, this aircraft was designated for service with a commercial airline doing vital war work. First stop was Miami, where she and pilot Pete Goutiere became acquainted. Pete would get her started on what would be a very long and legendary lifetime of service. 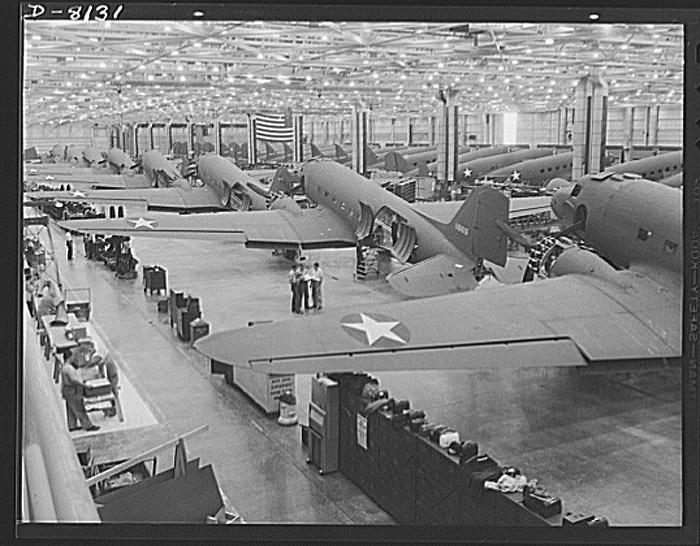 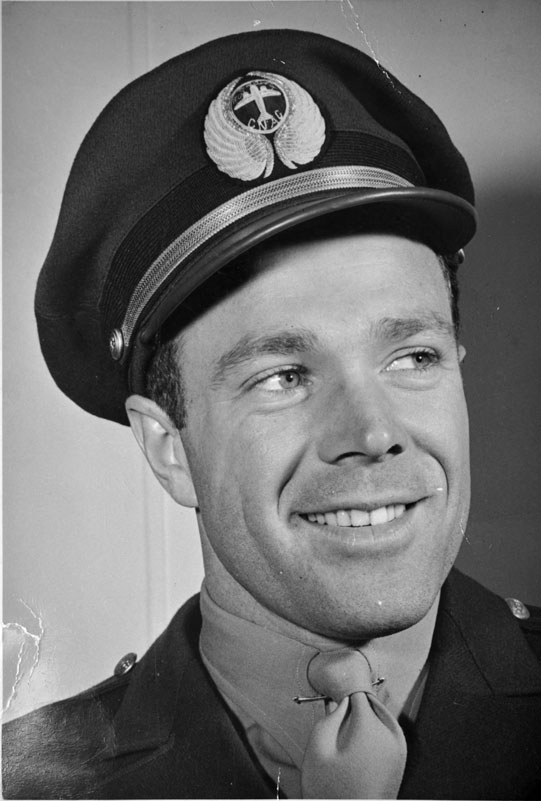 Pete was a pilot for the China National Aviation Corporation or CNAC, which was a partnership between Pan Am and the Chinese government. He was returning to “work” on the other side of the world after a brief visit home and was to fly the new plane back to India to start service with CNAC.  He and his crew left Miami (with a pre-approved farewell “buzz job” over the MIA tower) on August 15th. After fourteen days and 87 flying hours crossing ocean, jungle, and desert, they arrived in Calcutta.

The US Army Air Corps markings were removed, and the “chung” symbol of CNAC was applied along with a new designation for the plane as “CNAC #100.” Now she was ready to assume a part in what was one of most difficult flying missions anywhere: keeping wartime China supplied by air across the Himalayan Mountains. Without these flights from India, China would have been completely cut off from the free world by the Imperial Japanese invasion. Potentially deadly encounters with enemy fighters, and some of the most treacherous flying conditions on Earth were regular challenges for CNAC and Army Air Transport Command (ATC) crews flying those Hump missions. 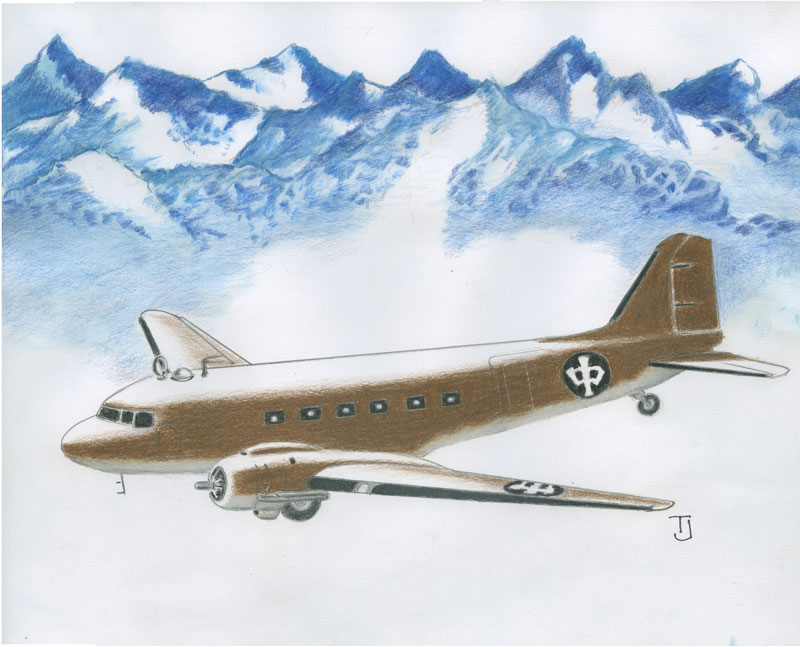 Illustration: A CNAC C-47 over the Hump (Courtesy: T. Johnson)

The “Dakota,” as the C-47/DC-3’s were also known, proved to be an amazingly versatile and rugged aircraft, for both peace and wartime work. On June 6th, 1944, only a month before CNAC #100 left the factory in California, well over 1,000 of her sister ships engaged in what was one of most massive battles of the Second World War – the D-Day Invasion of Europe. Waves of Dakotas supported the attack, flying missions under enemy fire. They flew paratroops to drop zones, hauled manned gliders to release points over enemy territory, and air-dropped vital supplies. As Dwight Eisenhower was to say later in his book “Crusade in Europe,” the C-47 was one of a handful of weapons not designed for war that proved vital to Allied victory. 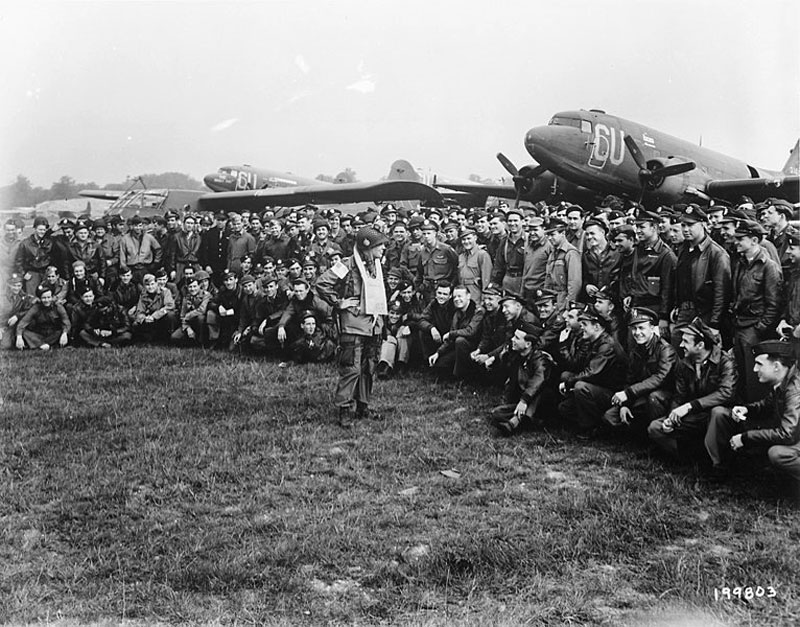 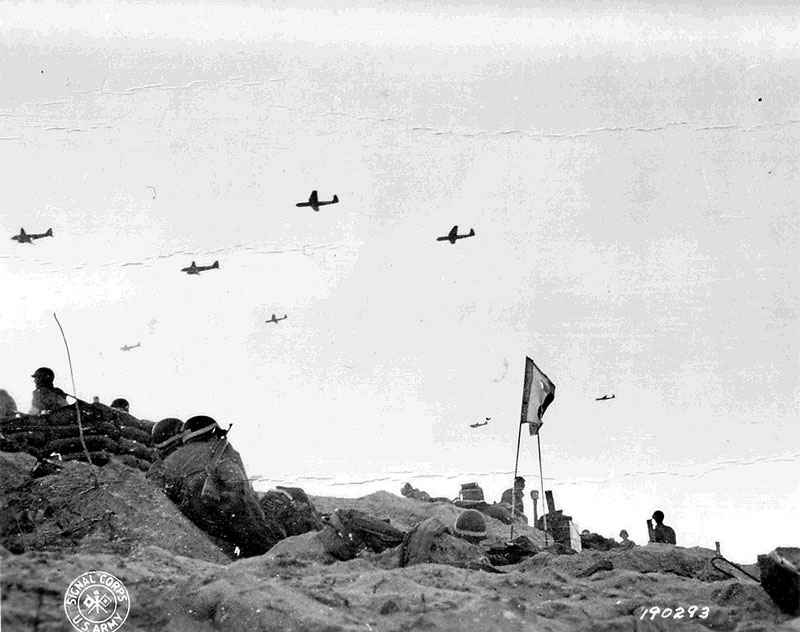 On the other side of the globe in Asia, Pete Goutiere and his fellow CNAC and ATC pilots flew their C-47’s (and other aircraft like the Curtiss C-46 “Commando”) in thousands of flights over the Hump. Many gave their lives in the process, and there are still grim remnants of aircraft lost along the “aluminum trail” across the Himalayas to mark their sacrifice. But CNAC #100 made it through the war, almost unscathed. (There was one non-fatal “nose over” that kept her grounded - for a day.) 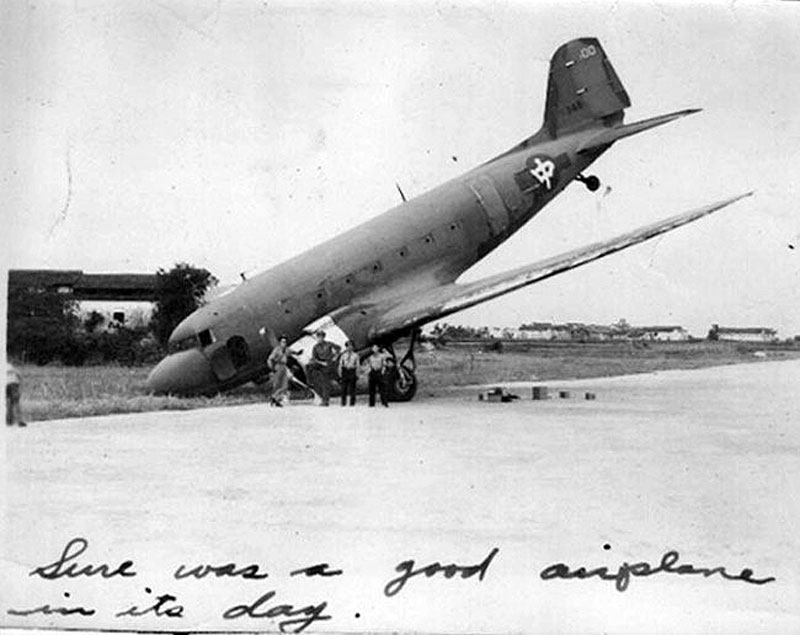 After the Fighting Stopped

She continued to fly for CNAC after the war ended. In 1947, Pete Goutiere left their employ and China to pursue his career in aviation, which culminated with many years spent as an inspector for the US Federal Aviation Administration. CNAC #100 made it through the ensuing Chinese Civil War. (Although that was near thing, thanks to a failed attempt meant to destroy the plane and keep it from falling into the hands of the Chinese Communist regime.)

But she was rescued - which is a complicated story in itself - to be sent back to the US by ship. Once back where she started in California, she was refurbished and upgraded for what would turn out to be a variety of successive civilian owners. After many years, she eventually found her way in 2006 to the Historic Flight Foundation (HFF) at Paine Field in Everett, Washington, an organization that does its utmost to “keep ‘em flying.” The venerable C-47 was carefully restored to something close to its former passenger-carrying configuration. In 2012, now in 1949-era Pan American Airways livery, she was ready to fly again,.

The Historic Flight Foundation is nothing if not devoted to preserving and promoting aviation history. With Pan AM's CNAC #100, they have had a particularly golden opportunity. In 2015, the Foundation’s John Sessions and Liz Matzelle found out that the airplane’s first captain, Pete Goutiere, was alive and well. Soon an incredible “sentimental journey” was in the works to reunite the man and the plane. Pete along with two grandsons flew out to Everett, and in a truly unique adventure, they and the HFF crew led by Chief Pilot Sessions were soon winging their way south to San Francisco. Pete, who had reviewed the manual for his long-lost plane (there had been a few changes, but not too many), did the pre-flight “walk around,” and got in some real time at the controls on the four-hour trip – and he had a ball! 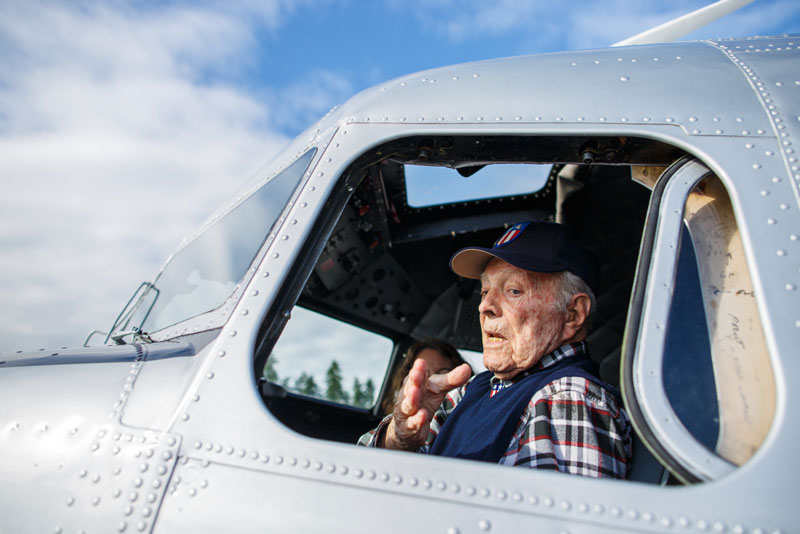 On their arrival at SFO, they were greeted by none other than Moon Chin, another former CNAC captain, along with many friends from the CNAC Association  (https://cnac.org/index.html). The ensuing celebration was memorable, made even more so given that the SFO Museum was then exhibiting a special exhibit, “The Legend of CNAC.” 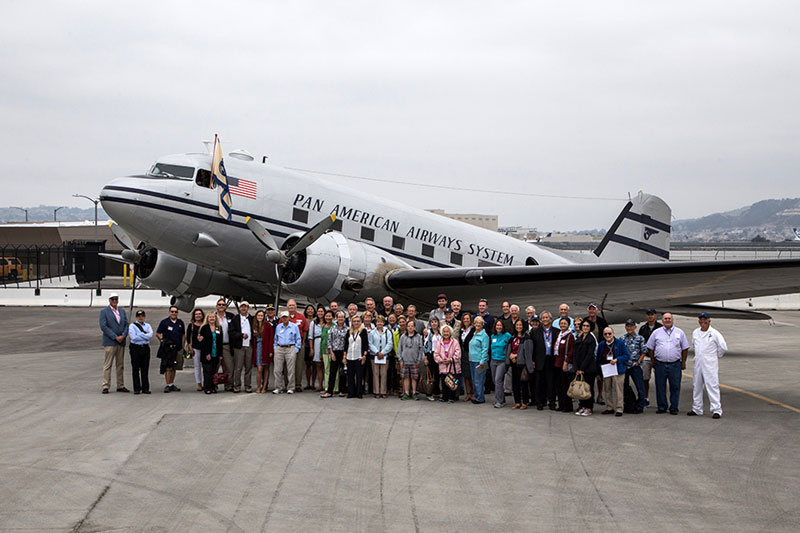 Another Mission June 2019: 75th Anniversary of the D-Day Invasion

Now the Historic Flight Foundation has another memorable flight planned for CNAC #100. This June marks the 75th anniversary of the D-Day Invasion. Very understandably, John Sessions (a son of a D-Day paratrooper) and his associates plan to fly their airplane to participate as part of the commemoration. Their goal is to fly the airplane to Europe, first for the D-Day Remembrance activities, and then on to Germany, in recognition of another historic event in which the Dakotas of yesterday played a major role - the Berlin Airlift of 1949. No one can deny that this very airplane, which did so much to help bring about victory in decades past, should be part of our recognition of a very historic legacy. So now in the 21st century, CNAC #100, 75 years after it rolled out of the factory, is still ready to carry out another important mission. 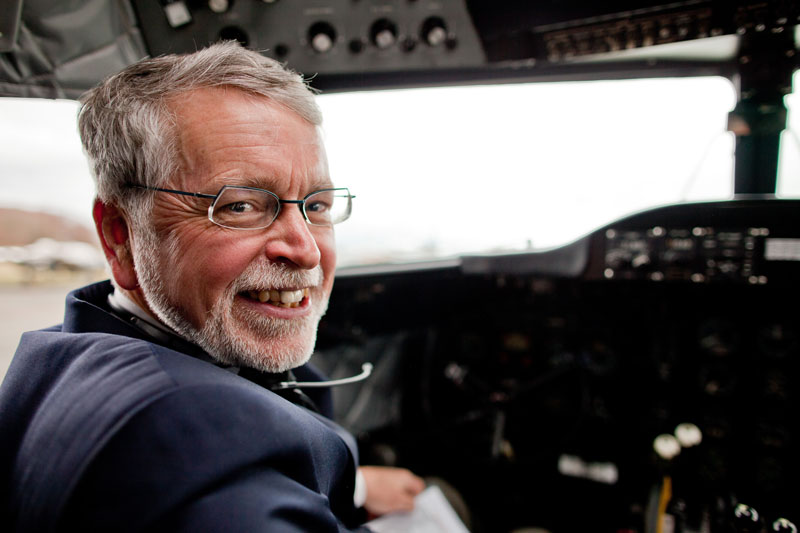