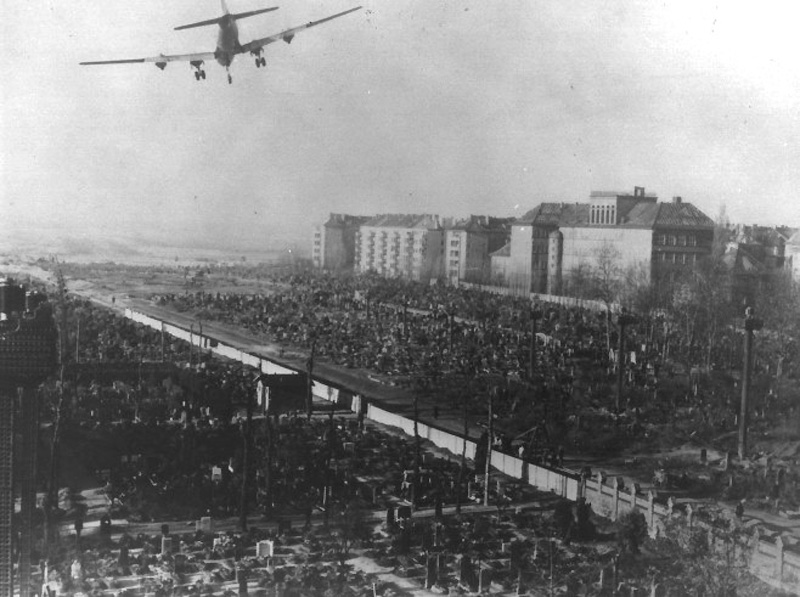 A C-54 flies over a graveyard and perilously close to some apartment buildings while making its landing approach at Tempelhof. (Truman Library and Museum Collection) 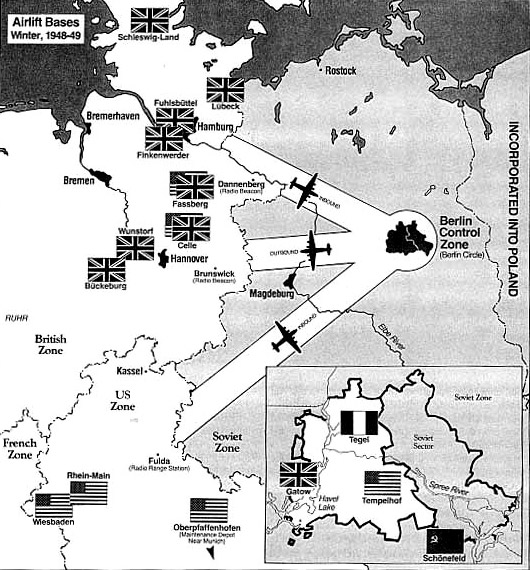 The Soviet Union, under the heavy hand of “Uncle Joe” Stalin, was actively seeking to reinforce hegemony over the lands of Eastern and Central Europe. The city of Berlin, like Germany itself, was still divided into zones of control reflecting the victorious powers that had vanquished Hitler. Berlin sat some one hundred miles inside the Soviet zone – that part of Germany that was to become the German Democratic Republic, or East Germany. Soviet military forces controlled all land access to Berlin, and the two million Germans in the three zones controlled by the Western Allies: the French, British, and Americans.

Following sporadic temporary road, rail, and canal closures, the Soviets permanently closed the access roads leading to Berlin through their territory on June 24th. The Allies had never negotiated an agreement with the Soviets about open access to Berlin via surface routes, but fortunately, this was not true about access by air, and an agreement was in place providing for three 20-mile-wide air corridors.

It was suddenly left to the western Allies to either abandon Berlin to Stalin’s mercies, or come up with a means of keeping the city and its citizens fed and supported. They chose the latter course, and so one of the Cold War’s most dramatic periods began: The Berlin Airlift.

Thanks to the British, who had already been maintaining a modest airlift to supply their own troops in Western Berlin, and who had done some calculating based on their own evaluation of the situation, it was understood that a fully effective airlift would require moving about 5,000 tons into the city every day by air. This included both food and coal for the one power plant still operating in the western sector.

It was fortunate also that Army Chief of Plans and Operations, General Albert Wedemeyer was making an inspection tour of Europe when the crisis broke out. As U.S. Commander in China during WWII, he was familiar with the amazing contribution made by the airlift over the Himalayan “Hump” route – the airlift originally pioneered by Pan Am’s subsidiary airline CNAC.  Wedemeyer believed that air power could solve the current crisis too. The Hump airlift had been run by General William Tunner towards the end of the war, and Wedemeyer appointed Tunner to take over the Airlift in July, 1948. From then on, the effort grew in efficiency and effectiveness. 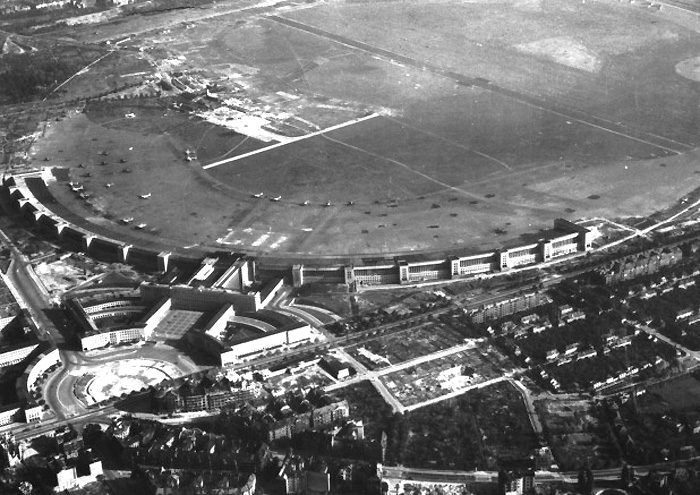 A pilot's eyeview of Tempelhof shortly before the blockade. Many of the large buildings surrounding the airport were destroyed by Allied bombing during the war. Unfortunately for the air crew who later ran the blockade, the leveled buildings were not on the flight paths to the runways (Truman Library and Museum collection).

Pan American Airways played a supporting role in the crisis. Like several other American airlines, Pan Am was instrumental in bringing supplies and vital materiel to the points of departure in Germany from which the military transports operated. At the time, one American company, American Overseas Airlines (A.O.A.) was granted route authority to fly from the U.S. to Germany by the U.S. Civil Aeronautics Board, and did operate flights to and from Berlin carrying passengers. A.O.A. itself was to become part of Pan American shortly after the Berlin Airlift in 1950, and many A.O.A. personnel and aircraft became part of the Pan Am family at that time.

By the following spring of 1949, daily tonnage arriving in Berlin by air was approaching 9,000 tons. Besides the required food, coal, and medical supplies, the airlift had delivered heavy machinery for construction of a brand new airport – Berlin-Tegel, in the French sector.  On April 21st, 1949 the tonnage carried by air exceeded that previously brought into Berlin by rail. Planes were flying into Berlin every 40 seconds, and Berliners by the thousands gathered to watch what they termed the “luftbrucke” (airbridge) in action.

The Soviets gave up their effort to starve Berlin into submission. The blockade was lifted on May 12th, 1949. Just to be certain in case of subsequent trouble, the Berlin Airlift was continued until September 30th, at a reduced pace, to build up a surplus adequate to cover future contingencies until a new airlift could be instituted. 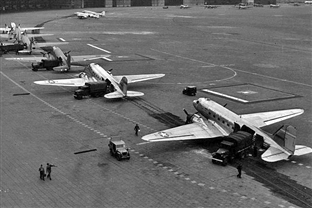 “In this image, C-47 transport planes, each containing 190 sacks of flour, are shown arriving at Tempelhof Airport, July 2, 1948. A pair of B-17 weather aircraft can be seen at the far side of the airfield along with a lone C-54 at the extreme right.” (US Department of Defense)

The Berlin Airlift proved the potential of modern air power to alter strategic outcomes using peaceful means. It also clearly demonstrated the resolve of the western Allies to confront Soviet domination in Europe, and made plain to the citizens of Berlin that they were not going to be abandoned in a game of global power politics. Although Pan Am was a supporting player in the Berlin Airlift, the airline proved again that it was ready to “step up to plate” to work with Uncle Sam when asked. 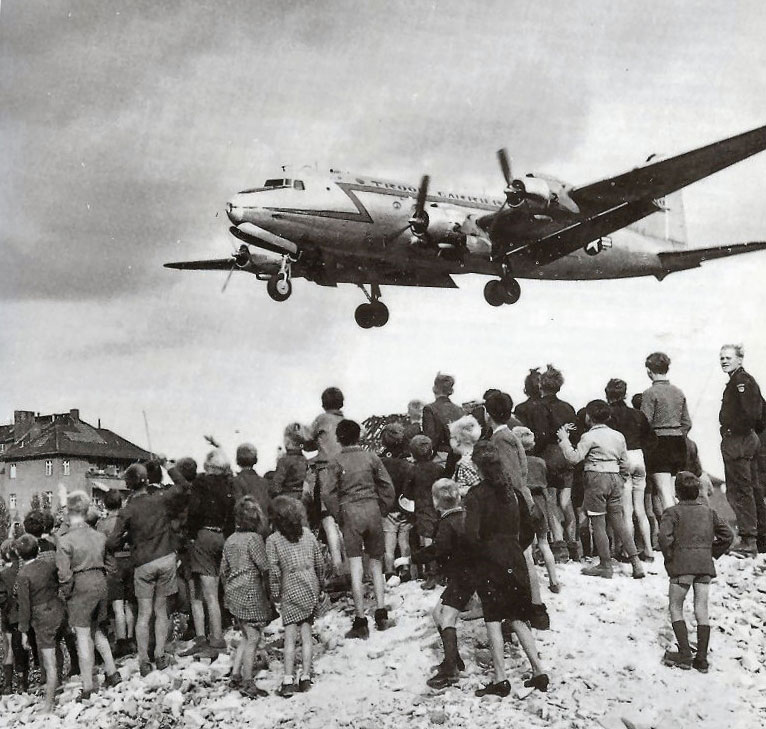 Wiesbaden Remembers the Berlin Airlift Candy Bomber and His Legacy,