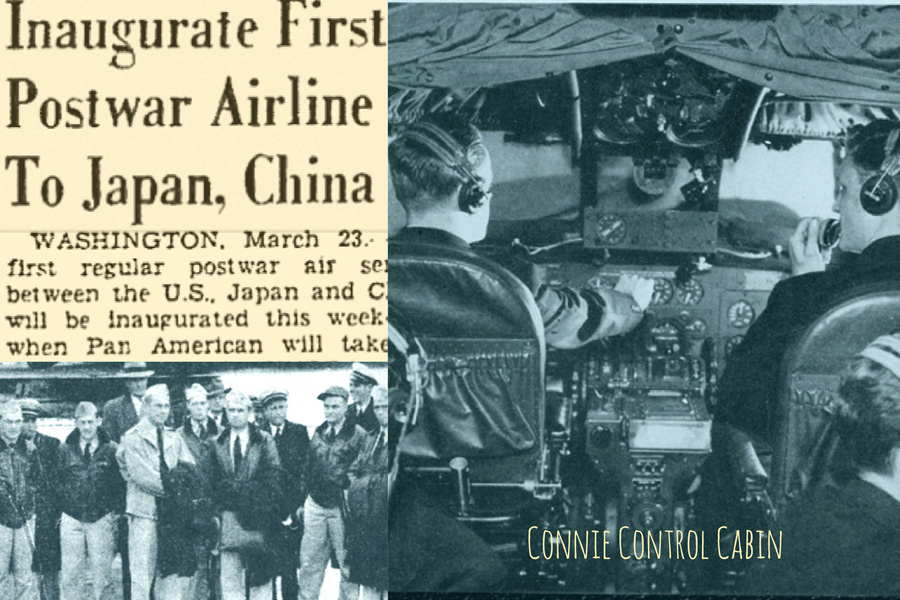 March, 1946: To borrow a phrase, it was a “world in disarray.”  The euphoria of victory among the Allies was fading fast. The raging conflagration of World War II was history, but the blaze had left smoldering hot spots and burned-out societies around the world. The United States was just starting to come to grips with problems on the far sides of both the Atlantic and Pacific oceans.

But it was also a breakout moment for commercial aviation. New technologies and potential opportunities were poised to change the game completely. Fast new pressurized aircraft, Radar, new airports across the globe, and thousands of experienced aviation veterans were about to remake the face of civil air transport. The governments of the world were waking up to the potential and had started to regularize the organizational frameworks that could insure global aviation’s functioning.

But for the moment, many of the practical benefits from aviation were still over the horizon. The world had a lot of catching up to do.

In Europe, the anti-fascist alliance of convenience with the Soviet Union was rapidly unraveling. In Asia, the collapse of Imperial Japanese hegemony in China and elsewhere had created a societal vacuum of immense proportions. Masses of displaced people and destroyed infrastructure meant political and social instability of the most urgent nature.

The American vision for world peace in those immediate post-war months was still evolving, but it was firmly rooted in a globalist perspective. By the end of the war, the victorious Allies were identified as the “United Nations,” and the new international organization of that name was being endowed with responsibilities and resources to undertake much of the rebuilding that was so urgently needed.

The UN had a new agency under its umbrella – the United Nations Relief and Rehabilitation Administration, or UNRRA, which was tasked with some of the most urgent humanitarian jobs. The United States Government was stepping back from some of the missions that fell in its lap in the immediate wake of the war, but UNRRA provided the means to pick up the baton in the race to stave off complete social collapse in war-ravaged countries.

The US was willing and able to support a great deal of the humanitarian heavy-lifting work at hand. For a time after the war, the US Army’s Air Transport Command (ATC) had been undertaking missions for UNRRA to Asia, but the time had come to hand off the effort.  As was so often was the case in the past (and would be again) Pan American World Airways got the nod to undertake the mission. 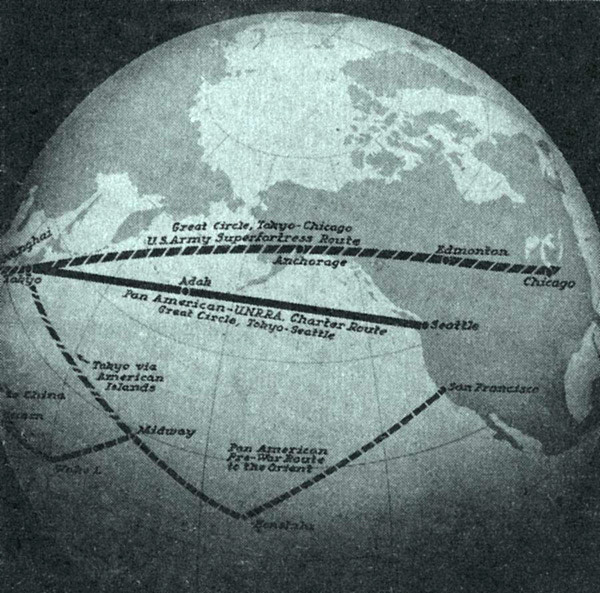 Pan Am Gets the Ball

In March 1946, Pan Am was just beginning to take on the post-war shape it would assume in coming years. The flying boat era was done, and the airline was making do with dozens of war surplus aircraft – Douglas DC-4’s and DC-3’s, and Curtiss Commandos. But the future was knocking at the door. New possibilities were opening up thanks to longer-range, pressurized aircraft that could fly higher and faster. The first generation of Lockheed L-049 Constellations were already being delivered to Pan Am, and promises of new aircraft like Boeing’s B-377, the Republic Rainbow, Lockheed Constitution, and Convair’s proposed huge Model 37 (a civilian variant of the B-36) were all potential additions to the fleet.

The real measure of aviation’s potential would be in flying long-distance routes. Now in true “air age” fashion, one step into the future would be flying the “Great Circle Route” to Asia.

When UNRRA needed to continue its airlift service to China after the US Army ceased providing it, Pan Am got the contract. The old transpacific route via the islands used by the “boats” before the war was once again open. But now another option was available – fly UNRRA’s flights via the Great Circle Route. A plan was put together: After a couple of survey flights from San Francisco, subsequent flights would originate in Seattle, fly north to Alaska, and on to Japan and China. Round-trip flights using this route would shave off 2,900miles from the old route – many hours of flight time. The first flight would follow the old island-hopping route going west. But the return would blaze a new trail. Captain Gordon “Brick” Maxwell was the skipper for the initial run. On March 24, 1946 the Constellation left San Francisco, carrying a crew of 15, along with 21 UNRRA passengers, as well as Lockheed representatives and 3 other PAA employees. They reached the US Army Air Corps base at Atsugi Airport in Tokyo via Honolulu and Wake in good time, but the planned departure for Shanghai had to be delayed due to very bad weather along China’s coast. The Pan Am crew used their unplanned-for tourist opportunity to view the mostly-obliterated Japanese landscape, noting (as reported in the company newsletter) that the locals were acting “suspiciously docile.” They overnighted in what was described as a former Kamikaze barracks and dined in the US Army mess hall.

After a rough flight to Shanghai the following day, the Clipper delivered the first load of UNRRA personnel and supplies. The city appeared to be somewhat the worse for wartime wear and tear, but relatively intact. After a good Chinese meal and a night’s rest, they boarded the Connie for the flight back to the US. Now the flight was in exploratory survey mode – no passengers. They made it back to Tokyo in record time, with a 90 mile-per-hour tail wind, covering the 1,180 miles in just under three-and-a-half hours. On reaching Tokyo, they were advised to wait for a few hours: predicted tail winds, an immediate departure would put them over Adak well before dawn, and Capt. Maxwell didn’t want to be landing his airplane at the remote wind-swept Aleutian destination in the dark. They were very pleased to learn that the Army’s Communication System operators had just established – for the first time – point-to-point radio contact with Adak.

So at 7:55 pm, Tokyo time on March 29th, the big Lockheed was off again – direct Adak. They were in the air for 8 hours, 36 minutes. It was another rough flight, much of it at 15,000 feet, flying on instruments through storms, often in heavy snow, experiencing up and down drafts of 1,500 feet-per-minute. Even bleak Adak must have been a very welcome sight.

One of the purposes of the trip was to establish the viability of the route, and Pan American had brought in new personnel to Adak (and to Tokyo as well) to prepare for what was hoped would be the forthcoming route award to Pan Am by the CAB. As much as anything, that first flight (and a second survey flight early in April) was a “proof of concept.” The airline was stationing crews at various stops along the new route to replace incoming flight personnel so that planes could be quickly sent on their way. And in the meantime, the UNRRA contract would be running for several months.

After another brief stop in Anchorage, the flight reached Seattle’s Boeing Field on March 30th at 2:11 am (having crossed back across the International Dateline) – with an elapsed flight time from Tokyo of 18 hrs, 25 minutes.

News reports at the time pointed out that although this was the first commercial flight FROM Asia via the Great Circle Route, it was – in a sense –  not Pan Am’s first flight TO Asia using the Great Circle Route. Fifteen years earlier in 1931, Charles and Anne Lindbergh had flown to Tokyo and China that way on a route survey for Pan Am. Now the “circle” had been closed. 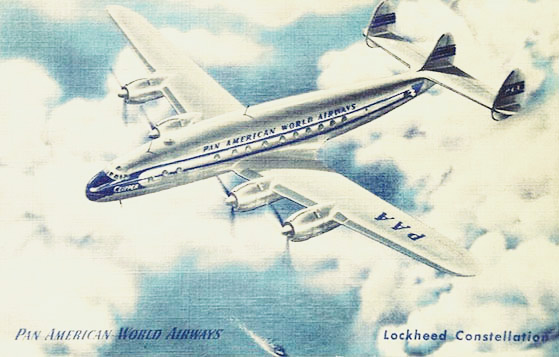