Notes on Pan Am Cargo

Background notes on the history of Pan Am’s cargo operations 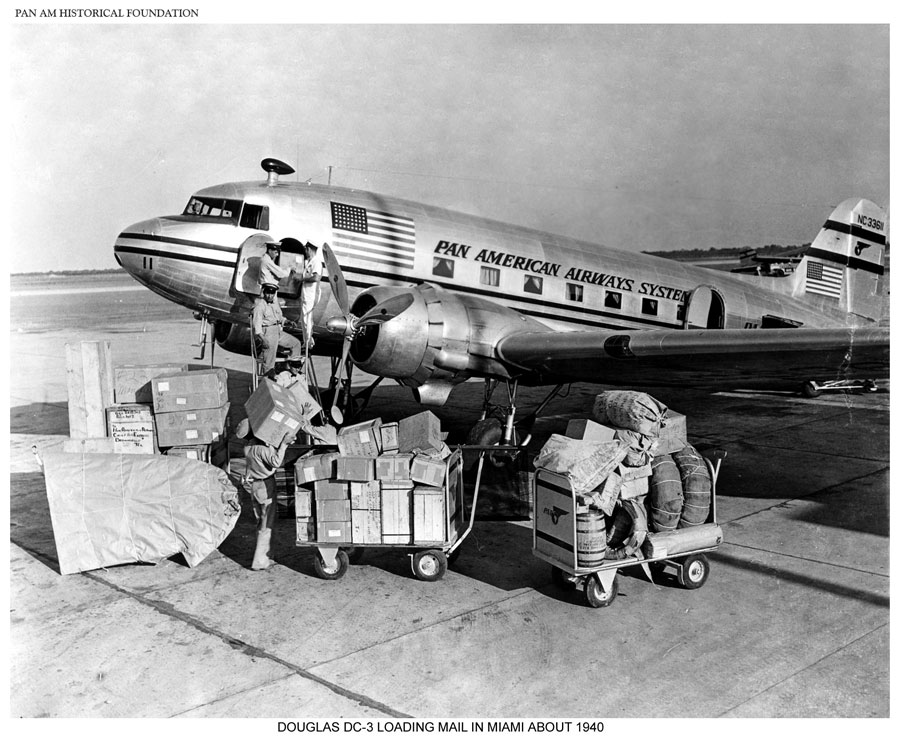 One of the greatest achievements which Pan American Airways has made during its existence has been the development of air express. Revenues from this source have been increasing yearly.

In 1929 Compania Mexicana de Aviacion, a Pan American subsidiary, Inaugurated air express in Mexico and from this rather small beginning the air express handled by the company has shown a rapid growth, especially since the United States entered the war.

Despite the fact that air express was started earlier its real development dates from August, 1934, when the entire network was linked with the domestic air express system of the Railway Express Agency, which gave more than 23,000 express stations in the cities and towns of the United States the facilities for shipping to any point in Pan American's System. The contract between the two organizations, which runs for twenty years, is ironclad. The benefits to the two parties are mutual. On the one hand, the continents of the world are made available to the Express Agency which was formerly confined to domestic transportation. On the other hand, it has opened for Pan American the possibility for greatly enlarged intercontinental trade.

At the same time that the above contract was agreed to the Pan American Airways document was introduced. This was a single bill replacing dozens of papers hitherto required to get an article across an international border.

Now more often than not the only additional document involved is the United States Shippers Export form. After years of negotiations this bill is accepted practically anywhere in the Western Hemisphere and ranks as negotiable paper for discounting at banks.

International air express was commenced by the System over the Pacific when the routes were first set up. However, due to special conditions imposed by the war, the transatlantic air express was not instituted until September, 1941, when a service was established connecting the United States with Lisbon. Pan American was prepared to offer facilities in the fall of 1939 but the start of the war resulted in great demands upon passenger space, causing a delay in the express service.

Since December 7, 1941, the amount of air express has increased substantially. In addition to ordinary business which has been large, many shippers previously using boats began to substitute the facilities of the System because of the reduction in sailings to the West Indies and Central and South America. Heavy war risk insurance for steamers plus increased rates for surface shipping result in many cases in higher charges by steamer than by air. Furthermore, shippers feel that they are more certain that their merchandise will reach its destination if shipped by the latter method. At the present time on the Pacific as well as on the Atlantic there are practically no commercial shipments being made since most of the space is used by the Government. However, large quantities of commercial products have been carried to Bermuda because there are few steamers operating to that point.

The Alaskan division, which started operations in June, 1940, has so increased its carriage of air express since the United States entered the war that recently the Government found it necessary to put an embargo on commercial cargoes flown over the route unless they were covered by priority.

In August, 1942, Pan American-Grace (Panagra) started the first scheduled commercial all-express service by an international air carrier certified by the Civil Aeronautics Board. Services were commenced on Panagra's route from Balboa, Panama to Lima, Peru. In two and a half months Panagra transported nearly 80,000 pounds by means of this new service.

Related Article: Pan Am Cargo: A Reflection by Thor Johnson