The End of an Era: Pacific Propeller Flights

NANDI, FIJI ISLANDS—"'It’s always difficult to see a plane phased out, particularly when it has been one that you have enjoyed and one that's given you such pleasant associations and reliable performance . . . but that’s the price of progress.'

Speaking was Pan American Clipper Captain George Wilson, Seattle based, who together with Captain Fred Walts, also Seattle based but a resident of the unlikely-sounding Nevada community of Winnemucca, commanded Flight 865, a Pan Am Douglas I)C-7C on its last scheduled flight in the Pacific—it was the end of Pan Am’s piston-plane era in the Pacific…

The Pan Am Flight Service ladies quickly briefed the passengers on the fact that this was to be the last scheduled Pan Am piston-plane flight on this route. A few already knew. But all watched the familiar landmarks come and vanish as the aircraft lifted off exactly on schedule and was over Western Samoa by 1631 (local time), still climbing to its ultimate altitude of approximately 26,000 feet…

A little more than an hour out of Pago Pago, Navigator Andy Carlson called our attention to “tin can” island, a 19-acre dot in the Pacific that’s 300 miles southwest of American Samoa and a key check point on the route to Nandi. The DC-7’s radar also had the familiar island on its screen as a bright, distinct blip.

Then came the approach to Nandi, Fiji Islands, and a straight-in landing. There are no congested airports in this part of the world. A few minutes past 6:00 P.M., Nandi time, Wednesday, November 24, Pan Am Traffic Representatives Allan Snowsill and Desmond Wong had expedited all the departing passengers. They both agreed that they would miss the regular Wednesday arrivals of 743.

Later that night a small team of maintenance-men worked over N743PA and at dawn the following day, Thanksgiving morning, but a day sooner than it arrives in the U.S.A., Captains Walts and Wilson and a small flight crew boarded N743PA and took off, headed for Honolulu.

From Honolulu the 743 would proceed to SFO, where it was scheduled to undergo some major engine service and be used, for a limited time, as a trainer.

Sometimes the only “first” an ordinary person gets to be a part of is a “last.” But the N743PA should not be remembered as a “last.” After more than 28,000 unblemished, revenue-flight-hours, the 743 is not about to be “last” to any plane, regardless of where it may go and who it may serve!" 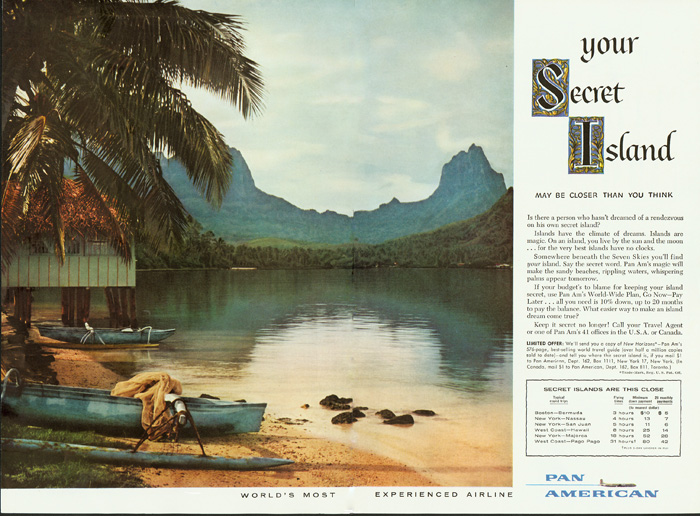