It's always encouraging to find young writers who share our excitement about Pan Am. We're very pleased to be able to share this article by Taegan Obermeyer-Loder, a college student currently studying aviation. He has particular interests in airline history as well as modern and past technology. 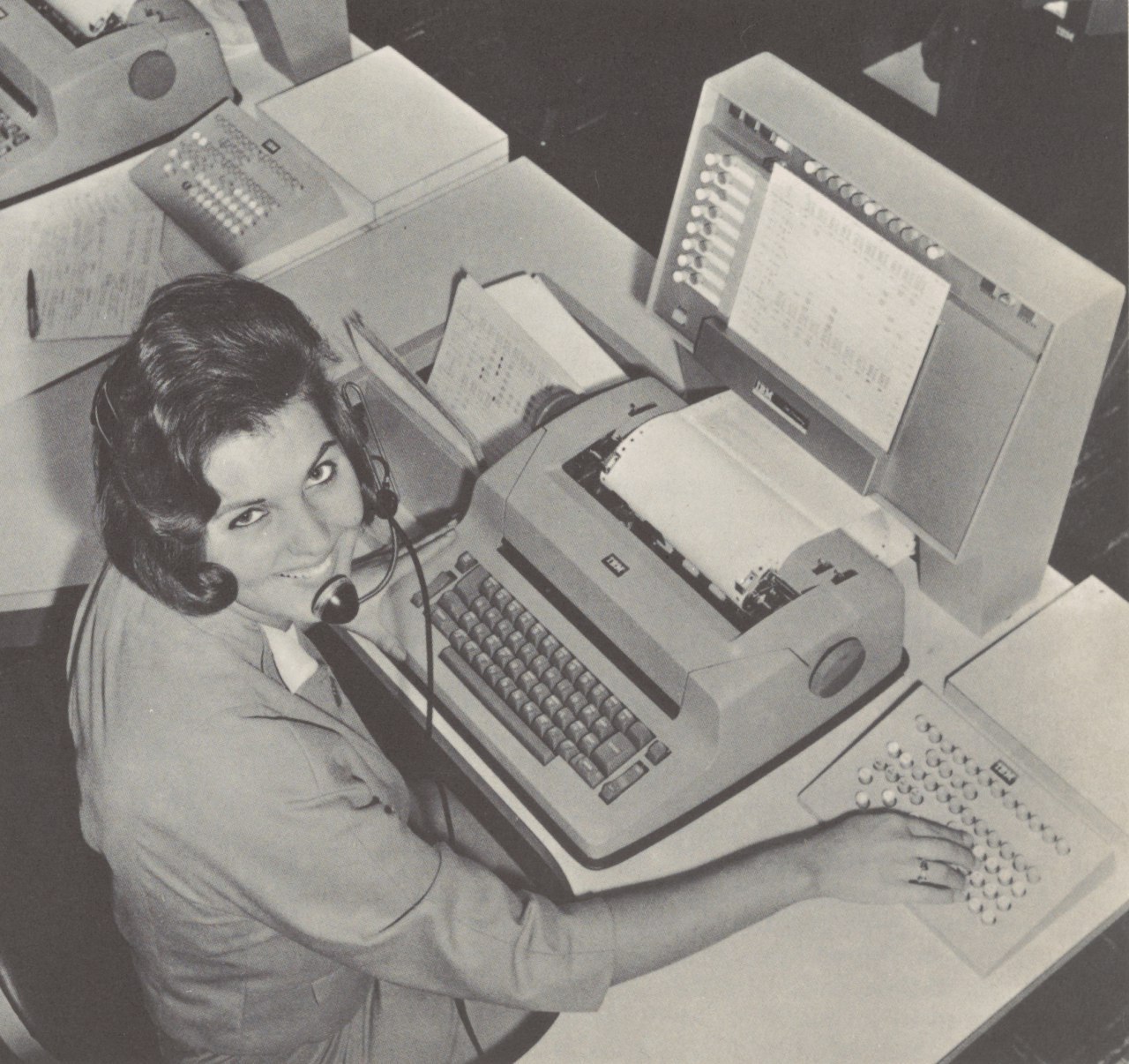 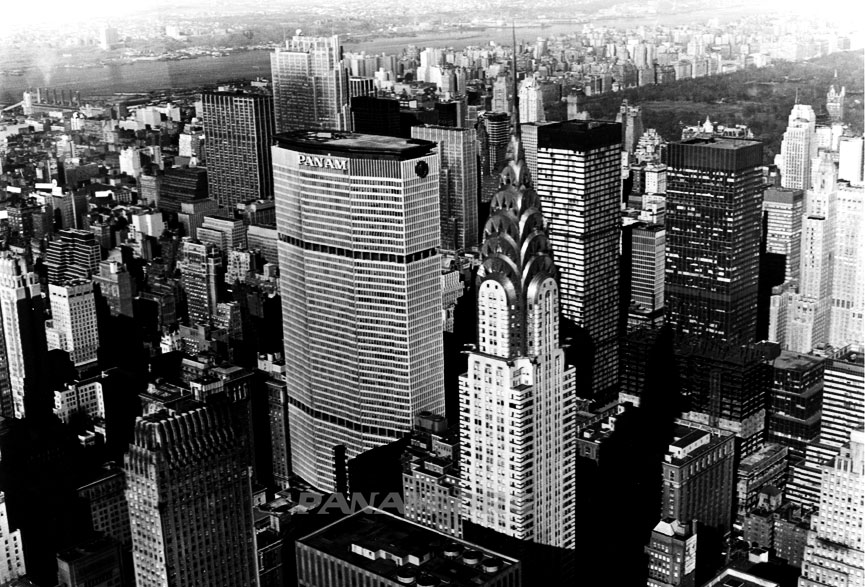 Pan Am Building, New York City, 1960s, where PANAMAC was set up on the fourth floor. (Photo: Pan Am Historical Foundation Collection)

In 1961, James Montgomery, Pan American World Airways’ Vice President of Passenger Sales, announced the collaboration between IBM and Pan Am to produce an innovative, powerful reservation system called PANAMAC, which could retrieve results in as little as 3 seconds. The PANAMAC system served Pan Am from 1963 to 1991, when the airline shut down. It was originally intended to be a worldwide reservations and communications system but was used for a lot more because of how powerful it was. 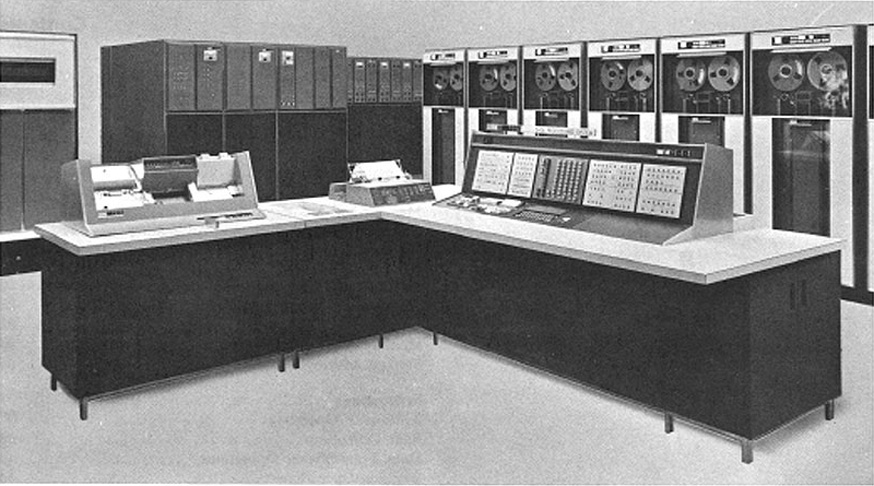 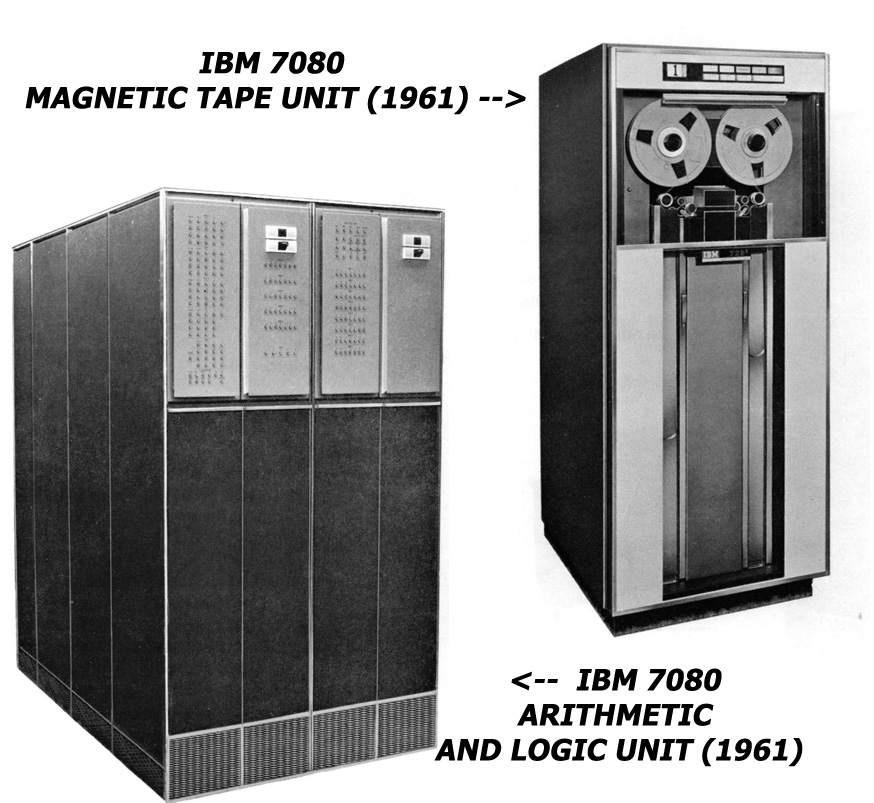 It ran off two IBM 7080 computers running in tandem, each computer being able to run the whole reservation system by itself in case of an emergency. It was located in the fourth floor of the Pan Am Building in New York City and worked 24 hours a day, year ‘round. The total cost was 26 million dollars when it started operation in 1963.

PANAMAC would serve traffic and sales, accounting, communications, engineering, scheduling services of supply and any other uses that the company had for it. It provided by name service on over 1000 flights at once, coordinated connecting flight requests, prepared flight manifests automatically, extrapolated sales forecasts, and provided a scheduling system to agents. PANAMAC was at the time the most extensive hotel reservations system operated by an airline. Customers could reserve flights, hotels, car rentals, and other travel related activities up to a year in advance by calling a Pan Am booking agent or by visiting one of over 350 Pan Am ticket offices in 200 cities around the world. 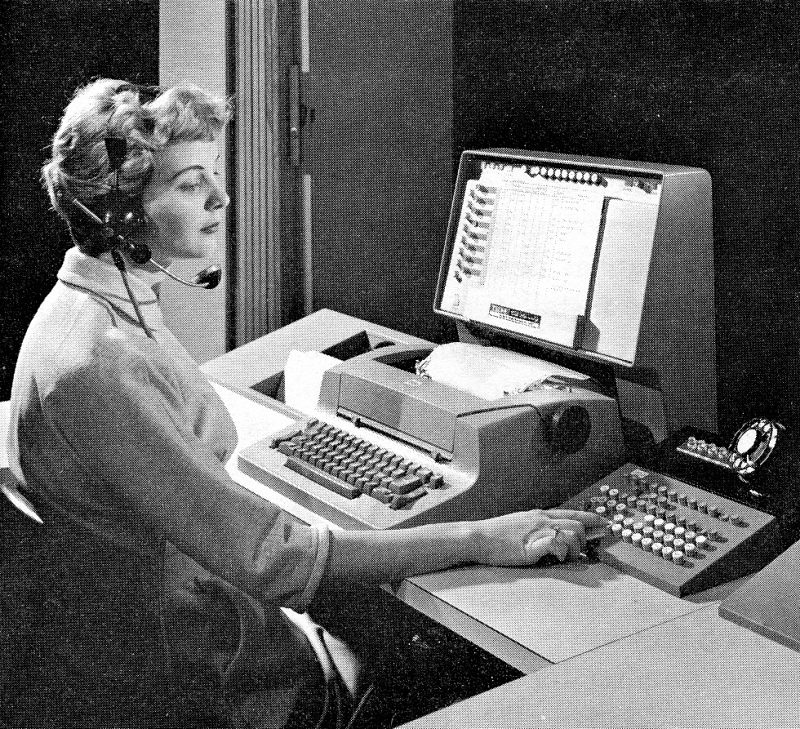 Above is an example from the PANAMAC Operators Manual of what a Pan Am agent saw when operating PANAMAC. This was one of two different display methods used throughout its life.  The first was the IBM 1003 input /output (I/O) typewriter. 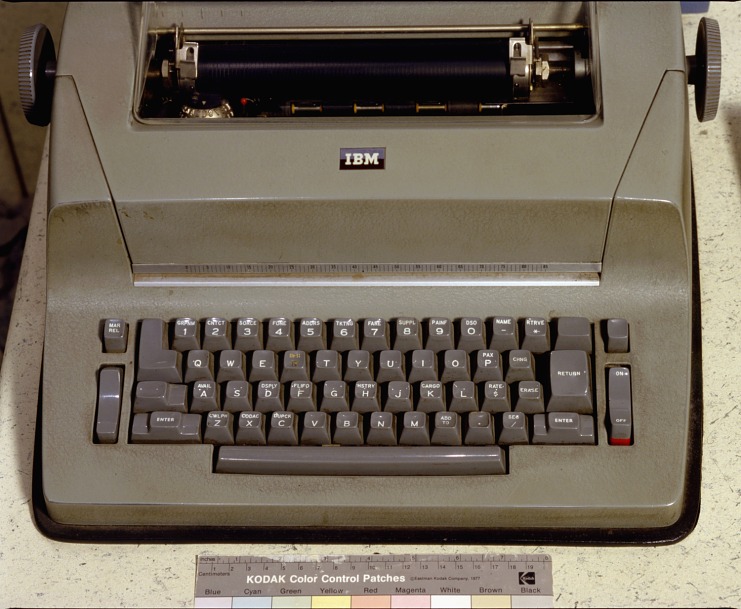 Agents using the typewriter had the results printed out for them by the typewriter, and to input a command they would type it out on the printout. (Now through August 2020: A PANAMAC airline reservation management system using the IBM 7080 Data Processing from 1964 is now on display as part of “My Computer Device” at the National Museum of American History, Behring Center, Smithsonian, Washington DC.)

The second method was with a Raytheon CRT screen.  Using this method, they could do everything as with the I/O typewriter, but manage it via the screen.  If they wanted a physical copy, this could be printed out. 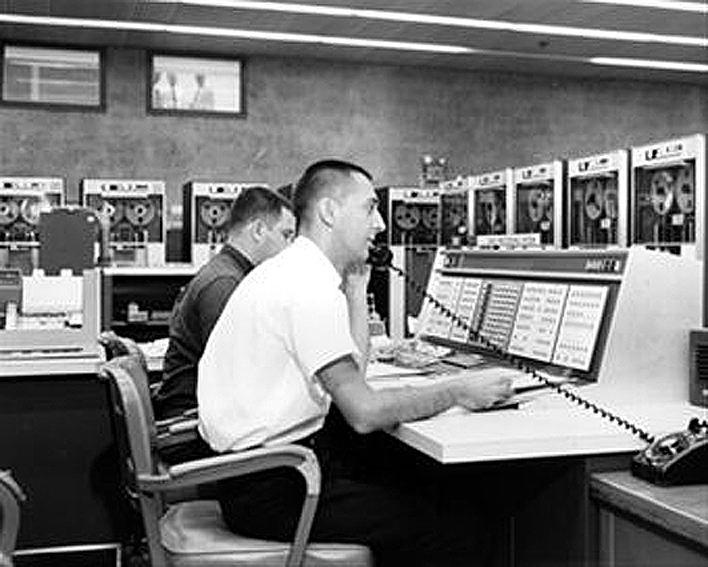 IBM 7080 in use by the United State Air Force (Wikimedia)

When booking, the screen displayed the date of the entry on the top left followed by the day of the week. On the opposite side on the top right, the words “Alternate Service” appeared, indicating that a marketing record had been created for the requested city pair. The first column displayed the airline for the specific flight and flight number, which in the first row of the example above is “1PA 201,” standing for Pan Am flight 201.

One thing to note is that the PANAMAC system could book with many different airlines. This is why Trans World Airlines flights are listed, shown as “3TW” and “6TW” respectfully.

In the next column to the right, there were a series of letters, representing booking classes and availability status of each. “F”, “C”, and “Y” represented first, business, and economy class, respectively. The “A” following the booking class stood for class open, “0” for class closed and “R” for request flight. Directly right a dollar sign ($) would appear if a night fare applied from where the flight would be boarded. In this example, it is blank since there were no night fares. The next column displayed the frequency of the flight with a range of 1-7 with each number indicating a day of the week, starting with Monday, so a flight only on Tuesday Thursday would show 24. If the flight were available every day of the week, it would be blank. This column also could display the specific date this flight was available if a non-standard schedule. In this example, the 20th of May.

Right of the flight frequency were the airports the flight was operating out of. In our example, the first flight listed is from San Francisco (SFO) to John F. Kennedy (JFK), then below it is a flight from JFK to Rome Fiumicino (FCO).  The subsequent column displayed the departure and arrival times in 24-hour format, showing only a pound sign (#) if the time for the flight had passed. The next column indicated the equipment used for the flight, such as JET indicating a jet aircraft, 747 (Boeing 747), L11 (Lockheed L-1011 TriStar), or 722 (Boeing 727-200). To the right was the meal service showing if breakfast (B), lunch (L), or dinner (D) would be served, each letter corresponding to each class listed earlier. Next was the number of stops the flight would have, a “0” in our example. Lastly was the flight time in hours and minutes followed by the layover time.  So for the first flight there would have been a 5 hour and 15-minute flight with a 2-hour layover. 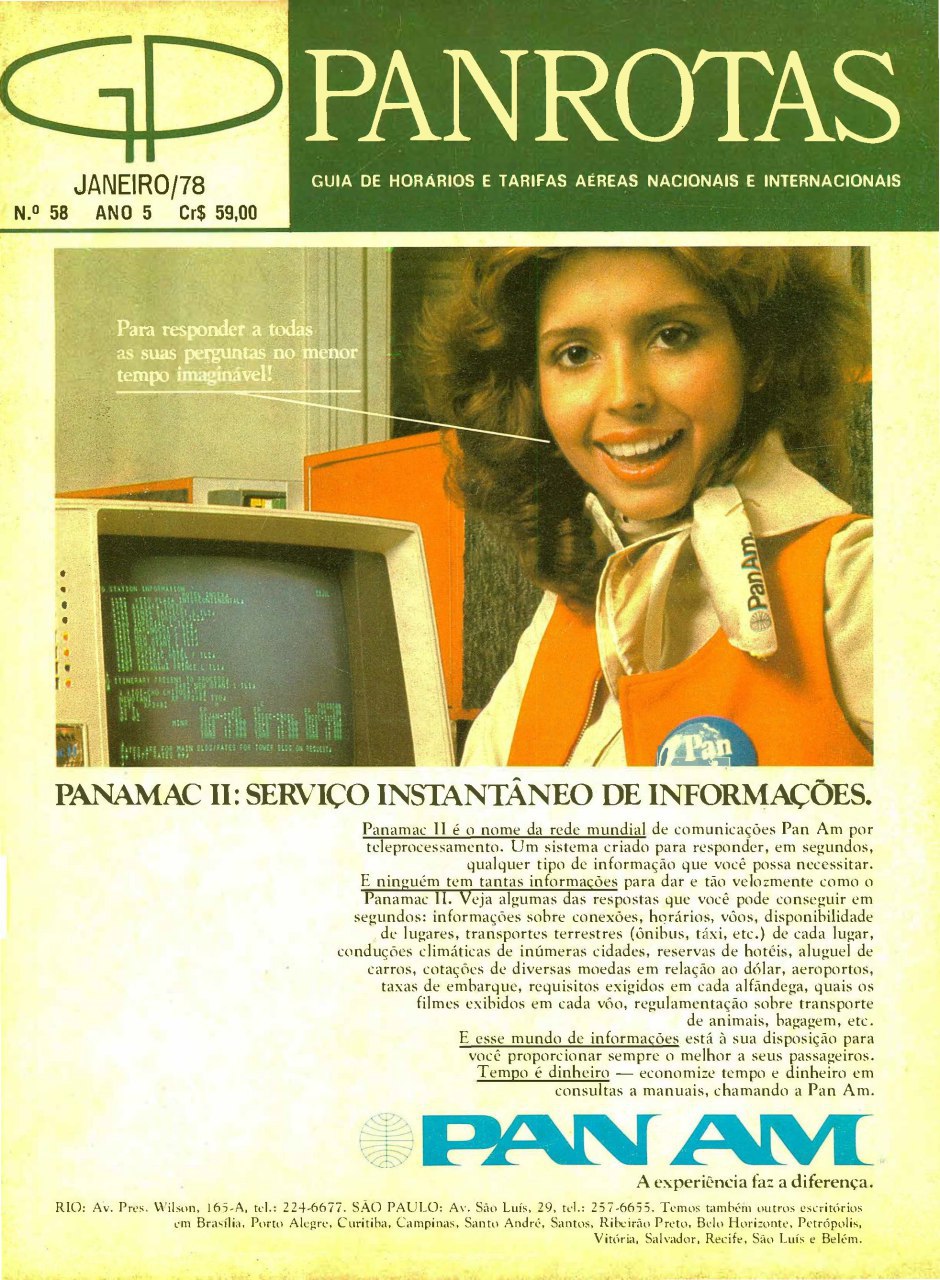 After PANAMAC, there was a revision aptly titled PANAMAC II. It was a successor to the original and used IBM 370/158 computers, which were located at the Rockleigh, New Jersey computer center instead of the Pan Am Building.  PANAMAC II processed more requests faster than its predecessor, processing in excess of 40 agent inquiries per second and retaining more than 1.5 million sales transaction records in memory. It could identify reservations for six classes of service on each flight and was able to book automatically up to a year in advance. PANAMAC II could also accommodate up to 4,095 flight departures each week. It had a priority override feature providing the agent with instantaneous information about the over 99.5% of scheduled hours available for operational use. It could prepare flight manifests and wait lists as well, but the most important feature of the system was that it permitted agents to sell space more accurately, therefore permitting more effective use of aircraft space and providing more efficient customer service.9. Pan Am’s Teleregister system was the old way of making reservations. Then came PANAMAC. 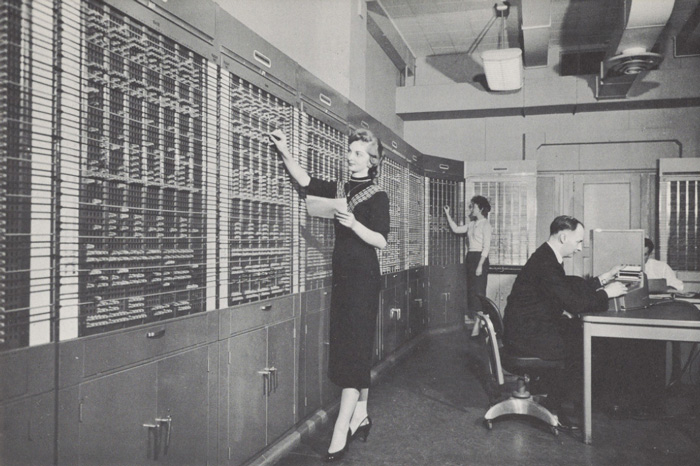 First there was Pan Am Teleregister, "P.A.T.", then came PANAMAC

PANAMAC was a revolutionary computer system for its time. With fast response times, the ability to be used over existing infrastructure, and digital tracking of all flights for the airline, it was an industry-changing technological advance. Previous systems used inefficient paper tracking and were prone to errors, which made PANAMAC a must-have for an expanding global airline.  At the time it first started operation, only the United States Military had a computer system as big and powerful, which reveals a lot about the sheer scale of the system, and about Pan Am’s “pushing the envelope,” on the ground as well as in the air.