Over 90 years ago, PAA inaugurated “express” shipping by air. Here's the development of international air express service, beginning in Latin America and expanding in 1936 with Pan Am's flights across the Pacific... 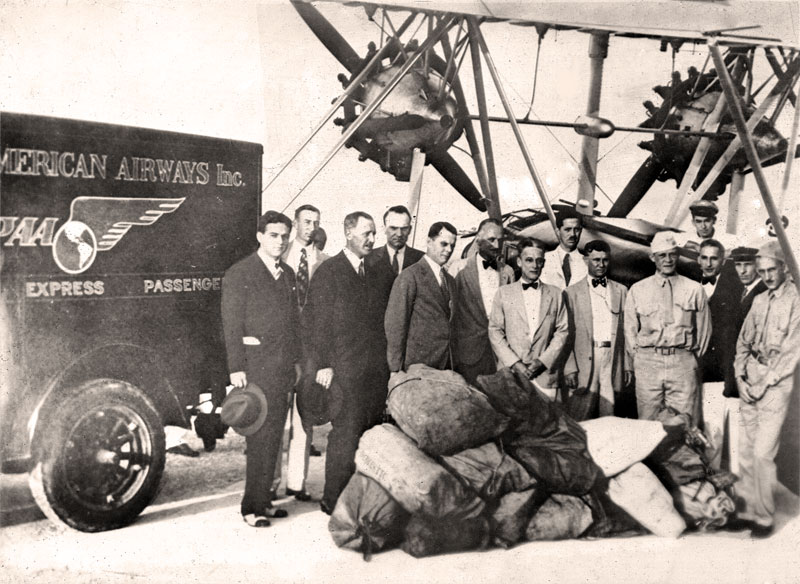 The Beginnings of Pan Am Air Express in Latin America

“Locked away in the express compartments of the hundred and more airliners on the 35,000 kilometers of airways in the Pan American System, curious cargoes flit from country to country. Marmosets from Brazil and Ducklings from Florida peep through the windows of their portable "houses" at strange assortments of goods that keep their company on their long flights.

As the air express grows in popularity, the bewildering variety and number of shipments increases constantly, an official of Pan American has pointed out. Fishing tackle and medicines, ladies’ dresses and packages of sheet music, samples of coffee, specimens of ore shot through with gold and silver are among the shipments recently made via Pan American.”

“Because of the speed of Pan American air express, it is possible to ship articles that cannot be carried successfully by surface transportation. Huge orchids, almost as large as washtubs, fly from their native tropical jungles to the United States of North America, arriving in perfect condition.… Replacements of machine parts, radio sets, and a whole host of articles of merchandise are habitually shipped by air express because the simplified procedure, the easy clearance through customs, and the avoidance of document certification with its numerous foes often make the air express cheaper as well as faster.” 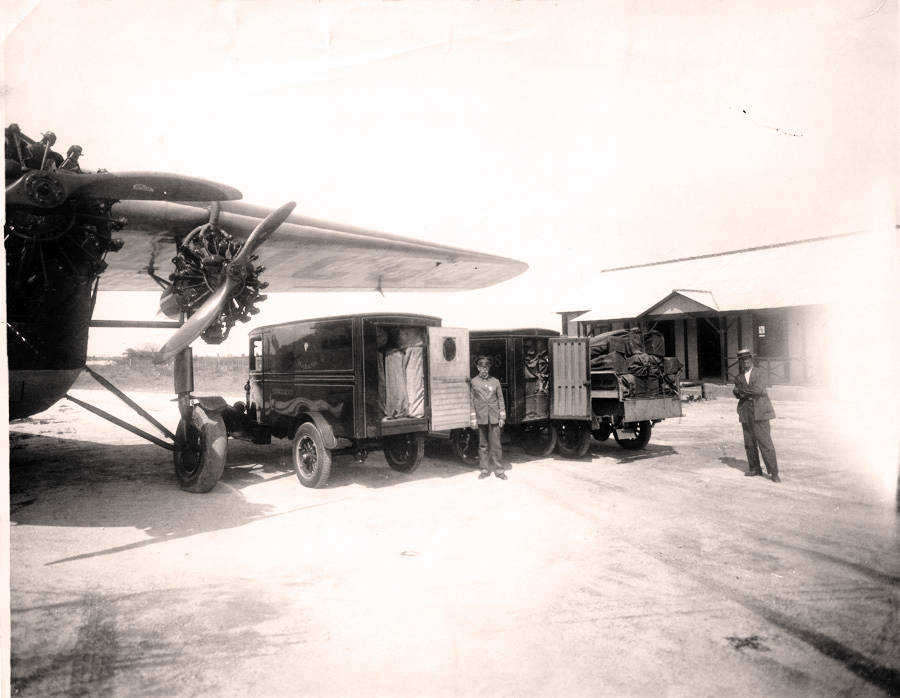 Pan Am Tri-motor with Mail and Cargo  in Cuba circa 1930s. (PAHF/Grant Mason Collection). 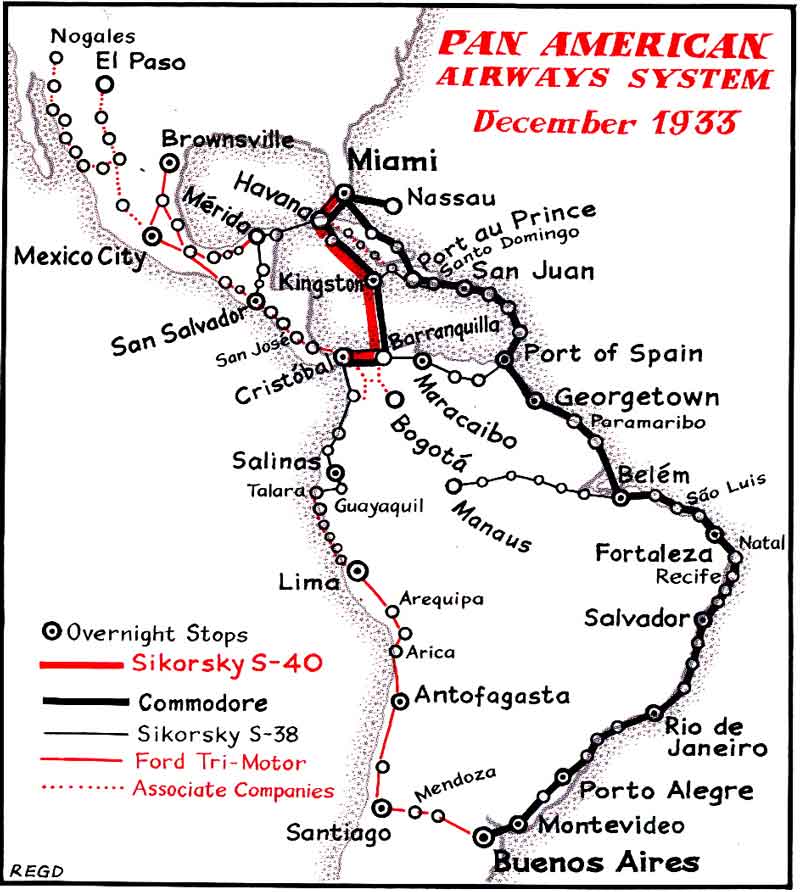 “Pan American Airways concluded negotiations with 30 governments for a high-speed express shipping service for international commerce… As the result of improvements in shipping facilities, in a field where no “express” service has ever before been available to American trade, Pan American made possible…sales of American products which otherwise would have been lost to competitors. The air express also provided a means of shipping perishable goods, light weight manufactures and other similar articles for the first time in international commerce, thereby opening a new field for American trade expansion. Air express shipments in 1933 on the Pan American Airways System showed an increase of 131 per cent over 1932.” 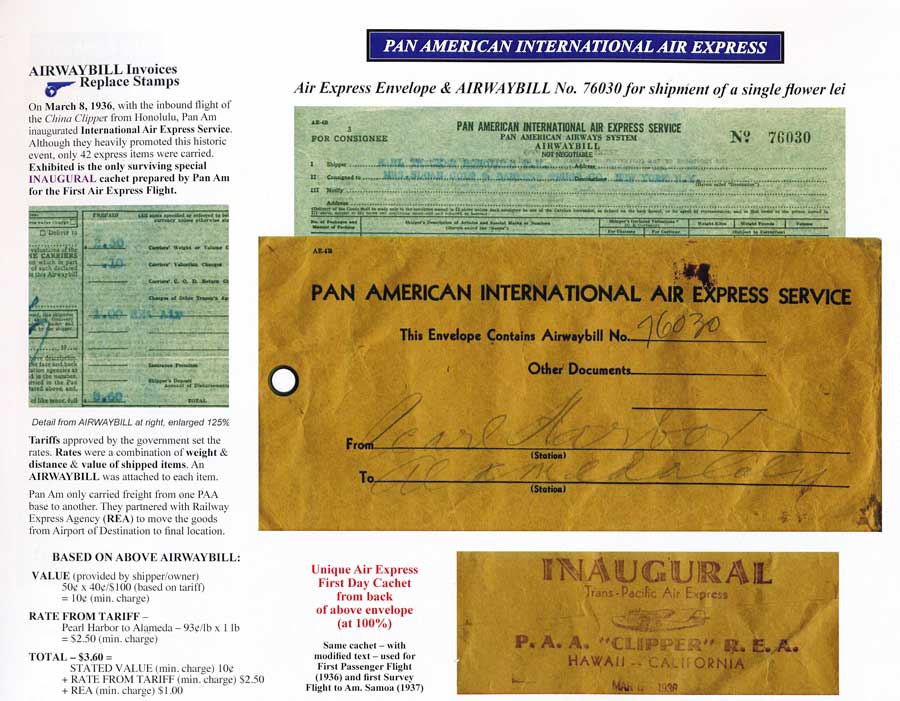 By March 8, 1936, Pan Am had launched their freight service across the Pacific Ocean. In the image above, note the unique cachet (bottom photo) from the back of an air express envelope that traveled aboard the “China Clipper” that day from Honolulu to San Francisco. It reads, “Inaugural Trans-Pacific Air Express” P.A.A. Clipper R.E.A [Railway Express Agency].” 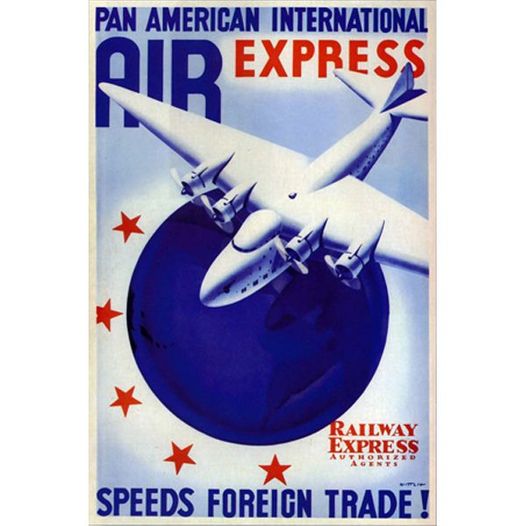 It’s worth remembering that airline service around the globe wasn’t just about moving people. This poster indicates the expansion of Pan Am Air Express with its partner, Railway Express Agency.

Air Express service provided a very valuable adjunct to passenger and mail transport between countries and continents. It was one more reason why Pan Am was a critical catalyst in the growth of international aviation.