For a short time as the 1920's were drawing to a close, two American companies were fierce competitors, battling for air route supremacy in South America's skies: Pan American Airways and the New York, Rio, and Buenos Aires Line (NYRBA). 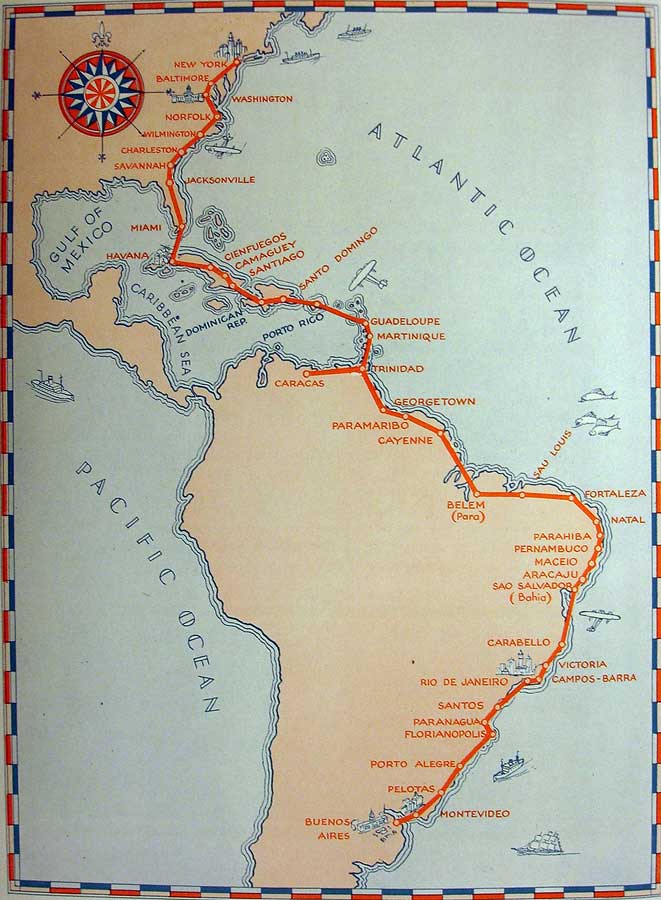 Under the leadership of World War I fighter pilot ace Ralph O'Neill, NYRBA had staked out a claim down the populous east coast of South America, and it was a force to be reckoned with. They had 14 state-of-the-art Commodore flying boats (which outclassed anything Pan Am had at the time), substantial financial backing, and could boast of several postal contracts with South American nations. Their first official flight took off from Buenos Aires bound for nearby Montevideo Uruguay on August 21st, 1929. By February of 1930, they were operating a through service from Miami in the U.S. (at Dinner Key) down to Santiago Chile, with service across the Andes using Ford Tri-Motors, and had the right to operate flights in Brazil under the banner of a subsidiary airline, NYRBA do Brasil.

Pan Am had staked out a west coast route in South America, but had to cooperate with the powerful W.R. Grace Company which had outsized political and economic clout in the region. By May 1929, the new cooperative venture between Pan Am and W.R. Grace - Panagra - was operating flights from Miami to Peru. By July, the line extended to Santiago Chile. By October, flying their own Ford Tri-Motors, Panagra was finally matching their competitor's trans-Andean service from Santiago to Buenos Aires (five weeks after NYRBA).

Despite the seeming advantages that O'Neill's airline enjoyed, they lacked one very critical element. While the mercurial former fighter pilot was battling the elements and political intrigue in South America to make NYRBA a going proposition, Juan Trippe was quietly working in Washington to gain influence - and a U.S. foreign airmail contract, which Postmaster General Brown was determined to award to Pan Am. In this crucial arena, Pan Am beat NYRBA hands-down. It benefited Trippe too that NYRBA's deep-pocketed backers were suddenly facing very stiff financial winds as effects of the stock market crash in October 1929 began to put pressure on their ability to throw money into the battle between the airlines. On August 19th, 1930 James Rand, O'Neill's biggest backer, agreed to sell his share of NYRBA for 40 cents on the dollar to Trippe's company. It was the end for NYRBA. Less than a month later, the deal was done; on September 15th, NYRBA was absorbed into Pan American Airways.

Trippe offered to hire O'Neill after the fact, but the proud O'Neill would have none of it. "They can steal my house, but they can't make me run it for them," he said.

Watch additional footage from this era in our video section, from MiamiHistory1896.