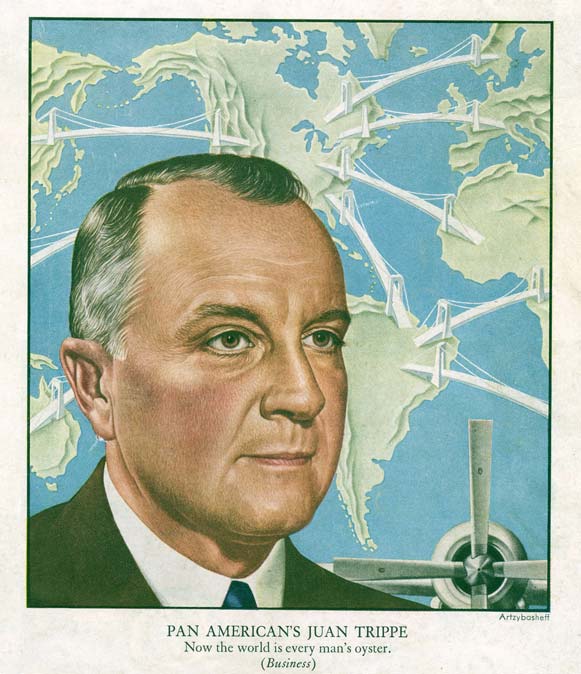 From a 1953 retrospective on Trippe’s career - by Collie Small

"At 53, Juan Terry Trippe is a husky, brown-eyed six-footer who has spend all his adult life trying to shrink the world to the size of a walnut. He has not entirely succeeded, of course, but he has come closer than any other human in history with a similar objective.

As both the founder and president of Pan American World Airways, it has been Trippe, more than any other single person, who has caused the world to contract with such suddenness that no place on the face of the earth is now more than 52 hours by air from New York.

Apart from his extraordinary vision, which in retrospect has been virtually infallible, the remarkable thing about Trippe is that he has accomplished so much in so short a time. His building a serial empire is a saga of twentieth-century adventure. Conceived and driven forward by one man, a commercial airline has taken islands in the name of the United States, negotiated treaties with foreign governments, and defied the British navy…

With his conquests of ocean and continents largely behind him, Trippe has turned to an all-out assault on the remaining barriers to travel: time and money. With characteristic vision, he realized some years ago that it was these two factors which were most likely to keep a great portion of our population from traveling abroad, and he did considerable thinking about it.

“A great percentage of the people in America are either foreign-born or their parents were,” Trippe told himself. “Why wouldn’t they like to go back to the old country? What’s more, almost everyone I know gets a paid vacation. The worker’s only problem is that he can’t get anywhere and back in two or three weeks without flying. If the price were right, he could go.”

Trippe set out against the heaviest sort of opposition to make the price right. In 1948, he inaugurated tourist service to Puerto Rico. It was immediately successful and proved what he had long been saying, “Tourist-class air service is simply an application of the tested American principle of mass production — achieving a wider and wider market by lowering the unit price.”

As usual however, Trippe was too far ahead of his competitors. When he proposed a new tourist-class service across the Atlantic, most other airlines protested vehemently that a $405 round-trip fare between New York and London would be ruinous to first-class services. Nevertheless, Tripp formally made his proposal at a conference in London of North Atlantic airlines operators.

He was promptly voted down. He then countered by refusing to agree to abide by the first-class fares set by the conference for more than six months, thereby forcing another meeting. Meanwhile, he ordered 39 new Super airliners… and blithely announced that Pan American would institute tourist service across the Atlantic in brand-new pressurized planes carrying 82 passengers each...

“It is not only a new service,” Trippe had said. “It’s a new type of passenger.”