(Continued from Pan Am Ops in Gander Part 1)

By Robert G. Pelley,  2017-12-11. http://bobsganderhistory.com Mr. Pelley is a long-time military and aviation enthusiast who grew up in Gander, Newfoundland – the “Crossroads of the World.” He served as officer in two of Canada’s finest regiments: The Princess Patricia’s Canadian Light Infantry and also with the Royal 22e Régiment, the famous French-speaking “Vandoos.” We are indebted to him for the use of this material.  Used by permission with photos provided by Mr. Pelley.  Return to Pan Am Ops in Gander Part 1

The Need for Runway Extensions

Another subject of constant discussion was the length of Gander's runways, led by Pan Am. A memo from operations staff to Juan Trippe, the president of Pan Am, dated 23 May 1949, explains the first salvo:

A high level internal Pan Am discussion explains what was hoped for in April 1949:

A letter to Pan Am VP Ingalls in May of 1949 resumed well the situation:

º Present runways permit Stratocruiser take-offs with 61 passengers and normal cargo only 65% of the time
º Goose Bay will have to be used on eastbound flights when winds in Gander prevent takeoff with full weight (Goose can be used with full weight under any wind conditions.)
º Agreements with Canadian and Nfld governments permit the use of Goose only if Gander is "not operational". If this includes wind conditions, there is mo problem. An interpretation is being sought.
º Movement of Pan Am B-377 Stratocruiser operations to Goose is not desired because Gander has better services. DC-4s and Constellations already use it.
º The best alternative would be the extension of a runway to 9500 ft, especially if a "high-density" Stratocruiser is used (98-100 passengers). A minimum for the actual 61 passenger planes would be 7500 ft.
º An extension to the basically east-west runway 14-32 is recommended.

There was fair amount of discussion over next months but on 14 April 1950, the Pan Am manager in Gander, Frank M Sylvester, sent a note to VP Strieffler, mentioning in particular that the Canadian Parliament had reduced the 1950-51 DOT budget from 75m$ to 50m$. The Gander operating budget was reduced by 500,000$. The best that could be hoped for was drainage on runway on 07-29 to reduce problems of spring thaw and to give it better lighting.

At one point, Pan Am suggested in collaboration with the other airlines to advance the money required to pay for the extension, with corresponding reductions in future landing fees. Alas, Canada being a parliamentary democracy, an action of this nature would in fact amount to trying get around budgets and laws voted by the legislature.

Another problem related to the runway extension was the cost of hauling gravel, which would be alleviated in 1951 by the planned construction of a new road.

It seems that many groups tried to have something to say about runway extensions. It was the IATA this time which gave the following information on 14 February 1951:

The 07-29 solution did not happen. The cost of moving the railway line made it impossible. Finally, it was runway 14-32 that was extended to Pan Am's satisfaction. Over the years, to accommodate bigger aircraft, Gander built even bigger runways. Sadly, these aircraft were soon able to overfly Gander and hardly use this new asphalt at all.  Here is photo of the runways in the 40s and 60s:

Pan Am: Centralizing Operations in Gander

Pan Am, over and above its own flight operations, was very much involved in the collective effort to keep things flowing on the ramp in Gander. At the time, each airline initially had its own ground services in Gander, with its own spares and stores. This covered everything from aircraft repairs and the provision of dishwashing facilities to cleaning aircraft interiors during stopovers.

On the other hand, Pan Am had had a fair amount of experience at New York's LaGuardia Airport, where Allied Aviation specialized in this type of work, reducing the costs to everyone. In Gander it was Pan Am who was the prime mover in getting Allied, under Les Gettel, set up in Gander. The following extract, from memo from 09 February 1948, sent HH Smith by Paul Strieffler, tells the story: #19

The files consulted also show considerable Pan Am effort in mid-1951 to set-up a central dispatch organisation, under Allied Aviation, rather than each airline having its own dispatcher. The documentation does not say to what extent this was successful.

Pan Am even offered its support in September 1947 for a cloud-seeding experiment at "Gander Field". These experiments were organized by the US Army Signal Corps via a contract with General Electric (Project CIRRUS). But it is not easy to understand why anyone would want more rain in Gander!

Pan Am was also instrumental in getting a Ground Controlled Approach system set up in Gander. This service allowed aircraft to land in the most miserable of conditions. While it is hard to tell have many lives it may have saved, it was certainly a key to maintaining efficient operations. The GCA story can be seen here: http://bobsganderhistory.com/gcap1.pdf

Technology Begins to Take a Toll

By the end of June 1952, Pan Am had completed, essentially through Gander, 37,789 trans-Atlantic crossings. Here is a sample Gander traffic record for the period late 1949 - early 1950:

On 19 June 1949 a letter from VP Leslie to the US Civil Aeronautics Board gave the following Gander financial information:

At that time Pan Am had 44 employees in Gander. The number decreased rapidly over very few years because:
º the GCA operation was replaced in the early 50s by a DOT Instrument Landing System (ILS)
º Allied Aviation took over ground maintenance
º as longer range aircraft became available, Pan Am activity in Gander was reduced.

The list of employees as of 15 April 1952 is shown below. To this should be added of course the name of one of the station managers, Don Marshall. From the documentation, Pan Am was lucky to have him. His efforts to take care of laid-off employees were quite remarkable and he often was cited by Pan Am officials as an example for others. He was as well quite involved in community activities. Early in 1950 he started talking about the need in Gander for a newspaper. He convinced the Lions Club executive to come on board and they agreed to raise the money to get it started and keep it operating. They did however, have one condition, namely that Don himself take on job as managing editor! This he did willingly, despite all his usual responsibilities with Pan Am, and on 24 October, a first issue came out. 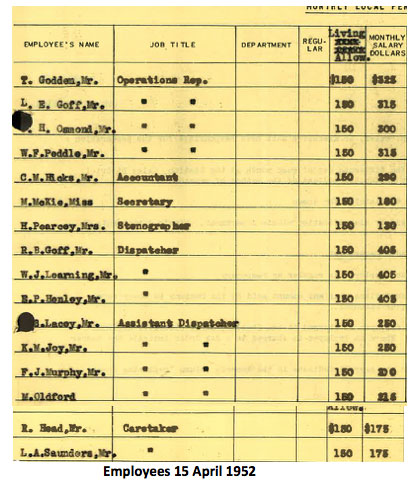 A name in particular on this list is worth mentioning, that of Rod Goff. In April 1946, he was hired as an assistant dispatcher. In September he was sent to the Pan Am school at LaGuardia and became the first Newfoundlander to receive the FAA Dispatcher's License (No. 433301 of 09 Nov 1946). Born in 1916, he retired from the aviation world in 1981, went to university, got three degrees and wrote his first book at 89. He died in 2017 at the age of 101.

The employees who went to Allied in 1950 were:

As early as August 1951, Pan Am saw that business through Gander eventually would slow down and that residential leases would be modified accordingly, especially in the context of a new town. This was also agreed to by DOT as it hoped to move personnel off airport property. The Station Manager reported the following to the Pan Am legal department:

The Jet Age Marks the End for Pan Am in Gander

The end of the road for Pan Am in Gander was seriously hinted at on 28 October 1958 when Pan American entered the jet age with a B707-121 named Clipper America, registration NC711PA, as shown below. It flew from NY to Paris with 111 passengers and 11 crew-members in 8 1⁄2 hours, including an unscheduled fuel stop at Gander. 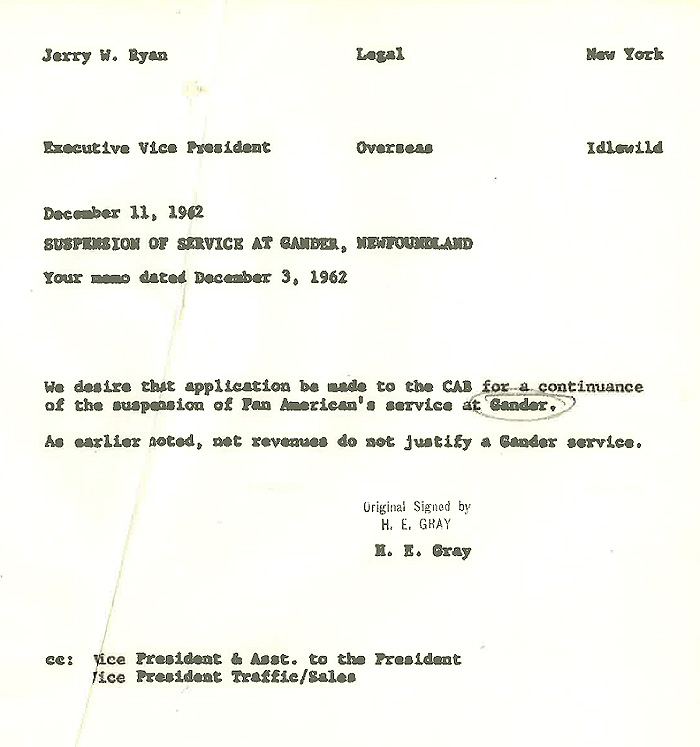 RELATED LINKS TO PAN AM IN GANDER: BOBSGANDERHISTORY.COM
Here are a few links to other Pan Am related articles on Bob Pelley's website:

The first shows one of my proudest possessions - a Gander boarding pass / seat reservation
http://bobsganderhistory.com/PAApass.pdf

Pan Am employees have been listed, in as far as possible, in a Gander genealogy section, showing the names of family members. Go to the address below and lookup buildings 17-18 Chestnut and 69-70 Roosevelt
http://bobsganderhistory.com/gene6a.pdf

Your comments and suggestions are most welcome at the following email address
This email address is being protected from spambots. You need JavaScript enabled to view it.