A New Clipper at the MAT

The PAHF-commissioned installation at the MAT is complete! The highly-anticipated new Boeing B-314 Model and three new bronze historical plaques at the Marine Air Terminal (MAT), LaGuardia Airport (LGA) in Queens, New York City were installed in October 2021.

After years of discussions with the Port Authority of New York & New Jersey, Pan Am Historical Foundation has completed its goal of memorializing Pan Am’s historic relationship with the Marine Air Terminal at LaGuardia Airport.

Also known as the "MAT", the Marine Air Terminal is one of the most enduring icons of the golden age of the great flying boats. Fortunately, the MAT is now a "listed’" building on the records of New York State Landmarks Preservation Commission and the National Register of Historic Places. Opened in 1940, the MAT served as Pan Am’s North Atlantic Operations headquarters.

Our year-end edition of the Clipper celebrates Pan Am’s long history at the MAT. To memorialize Pan Am’s history, the Pan Am Historical Foundation commissioned three bronze plaques that have now been installed in the building. 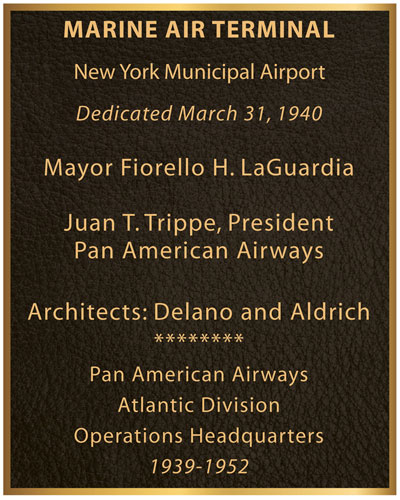 The first plaque, at the building entrance, recognizes Mayor LaGuardia and Juan Trippe at the opening of the Terminal in 1940. The plaque also identifies the architects, Delano and Aldrich, and recognizes the Terminal as Pan Am’s North Atlantic operations headquarters during WW II and continuing until the opening of Idlewild Airport in 1952. 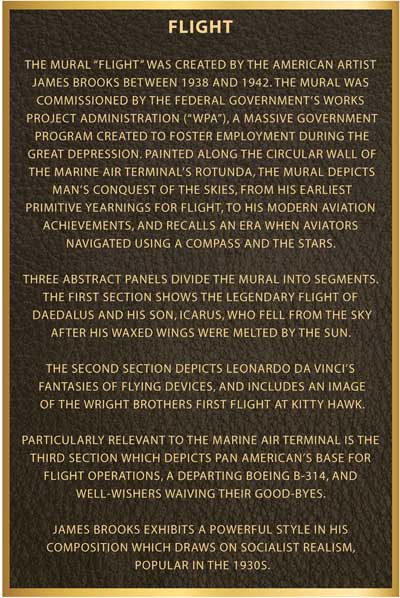 A second plaque is located at the entrance to the Rotunda and commemorates the mural, “Flight”, created by the artist, James Brooks. The mural spans the entire circumference of the Rotunda and depicts the history of flight beginning with early man’s mythological vision of flight with Icarus, the son of Daedalus, who is shown soaring in the air, then tumbling to earth as the sun melts his wax wings. Next is a large figure contemplating the mystery of the sky and on its right a panel depicting Leonardo da Vinci, studying birds to gain a deeper appreciation of flight. And continuing on the right an image of the Wright Brothers' first flight at Kitty Hawk. The final panel portrays modern flight at the time of the flying boat Clippers and depicts Pan Am’s flight operations and the departure of a Clipper. 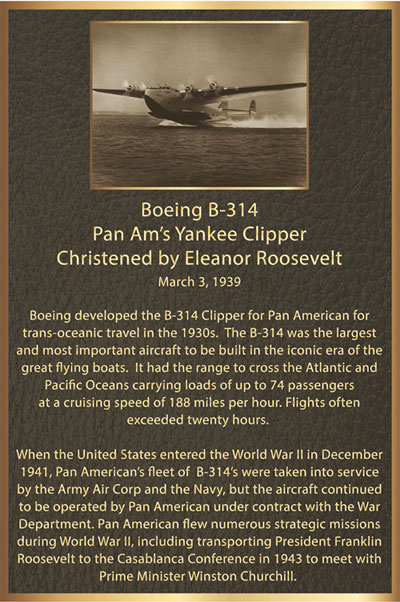 The third plaque commemorates the Boeing-314 flying boats, and provides information about these famous airplanes. The plaque also draws the visitor’s attention to the brand new B-314 "Yankee Clipper" model that is suspended in the center of the Rotunda. The new model is a 1/10 scale model of the aircraft, replacing the old model that was installed in 1986 at the opening of Pan Am’s Shuttle Service between New York - Washington & New York - Boston.

The History Behind the New,  Larger B314 Model The Old PAHF Model has graced the MAT Rotunda for years.

The provenance of the recently removed smaller Boeing-314 model is unknown, but it appears to date from the late 1930s or early 1940s, and the Age of the Flying Boats.

When the Intrepid Aircraft Carrier Museum was founded in 1982, Pan Am donated a collection of models to the Intrepid, including a 707, a 747, and the B-314. None of these models were exhibited, but in 1986 the B-314 was moved to the Rotunda of the MAT where it was first suspended as part of an opening ceremony for the inauguration of the Pan Am Shuttle.

The Boeing 314 by Atlantic Models, Inc.

The new B-314 model is a beauty. She was built by Atlantic Models, Inc., of Miami, FL. Roger Jarman, the President of Atlantic Models, has a particular warm spot for Pan Am. Roger’s father worked for Pan Am and his first job as a Manager Trainee was at Dinner Key, Pan Am’s seaplane base in Miami. Over the next 17 years Roger’s father served as Traffic & Sales Manager in French Guyana, Haiti, Panama and Venezuela. Young Roger grew up during Pan Am’s golden age which he credits for his passion for both Pan Am and aviation. 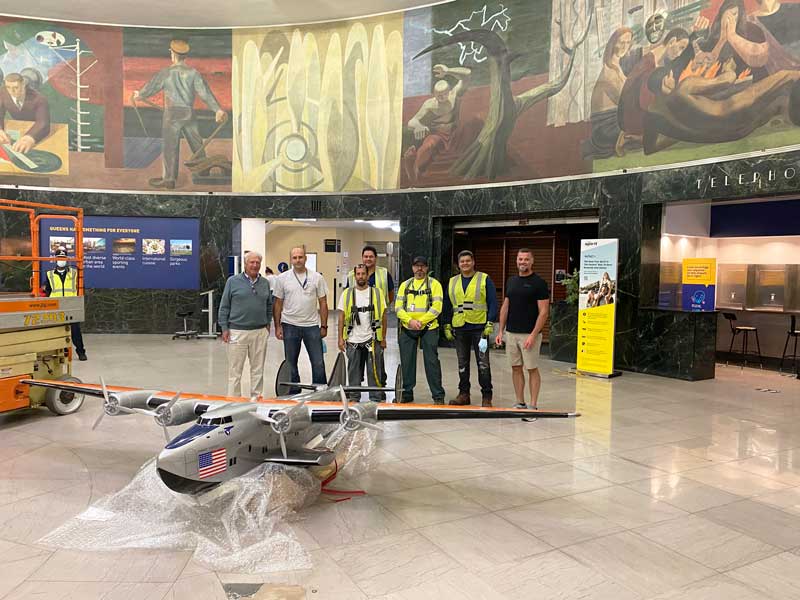 When you are in New York, visit the Marine Air Terminal to see this very significant tribute to the legacy of Pan Am.

Behind the Scenes: Roger Jarman and Building the Boeing 314

The outsized flying boat model is the creation of Atlantic Models of Miami, Florida. The company, founded by Roger Jarman, has a world-class reputation for presentation model projects, for clients such as Boeing and numerous airline customers. Their techniques run the gamut from intricate computer-controlled precision manufacturing techniques to the very painstaking hand work of master modelers. They are responsible for creating the new Clipper model as well as directing its installation. Their work already adorns another historic display at the restored TWA Terminal and Hotel at JFK. 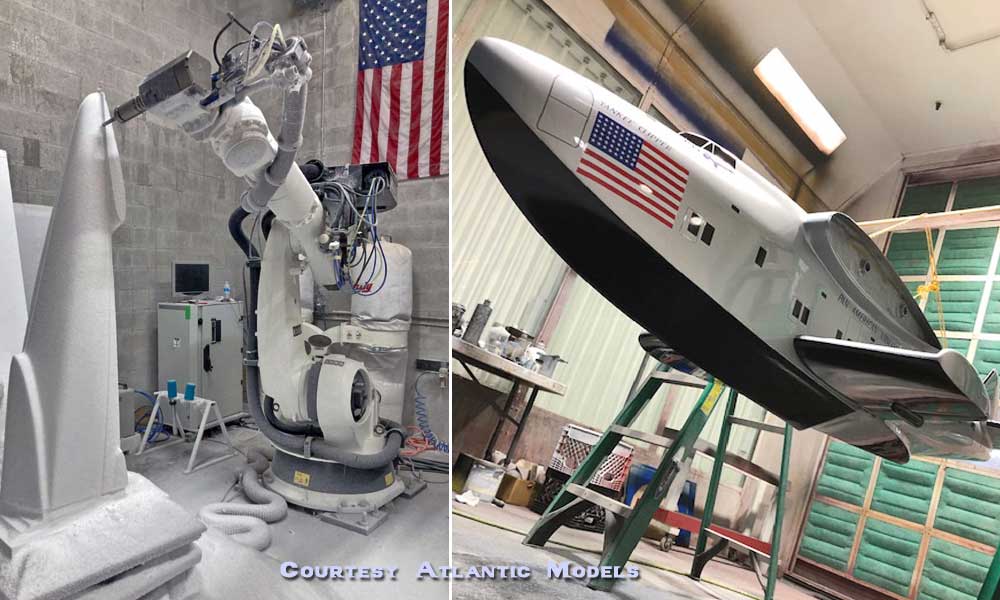 The computer-controlled Kuka CNC machine at Atlantic Models (left) was used to create some of the components for the new Pan Am B-314 Model, seen from below (r). Photos courtesy of Atlantic Models. 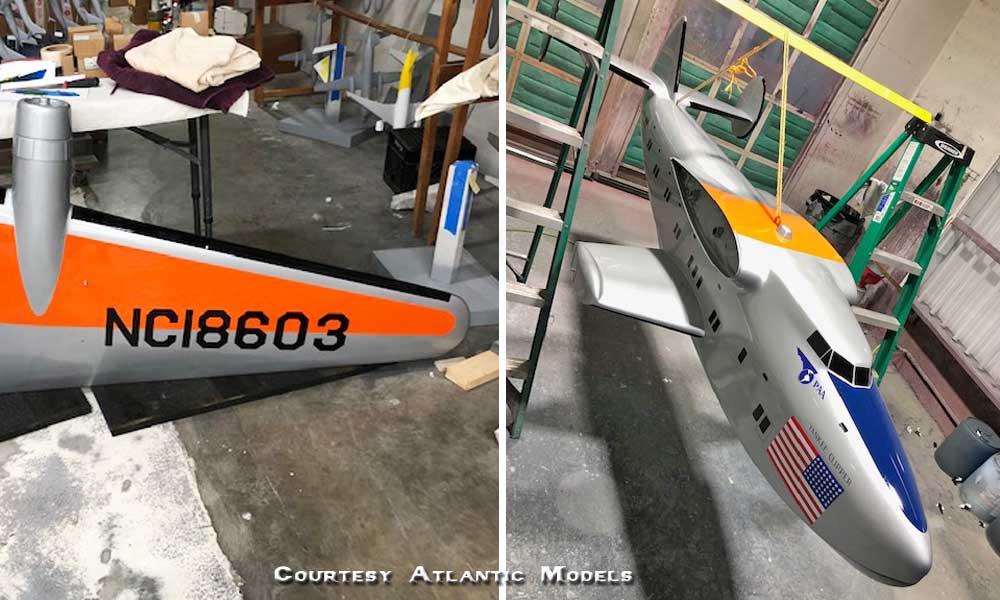 Yankee Clipper Wing detail (left )and Pan Am B-314 viewed from above (r). Photos courtesy of Atlantic Models.

The older B-314 flying boat model, property of the Pan Am Historical Foundation, won’t be losing its pride of place either, as it will be loaned to the Pan Am Museum Foundation at the Crade of Aviation Museum, Garden City, NY . Originally, Geoffrey Arend ("Air Cargo News") helped locate and hang that very model, which has graced the MAT rotunda for many years. Arend was also responsible for saving many of the building’s original fixtures and furniture, as well as placing historic photos that have added an impressive historical dimension to the historic building.

The MAT: A Landmark Site

The MAT is on the National Register of Historic Places, maintained by the US National Park Service. As a result, any changes to the building have to comport with strict guidelines so the planning process has involved multiple entities, including the Pan Am Historical Foundation, LGA’S management team, and the Port Authority of New York and New Jersey, along with assistance from knowledgeable consultants from the historic preservation field. But it’s now a done deal, only awaiting the arrival of the plaques and Yankee Clipper model to be installed.

In a recent communication to PAHF Chairman Ed Trippe, Anthony Vero, the current General Manager of LaGuardia said this:

Ed,
LGA is deeply indebted to you and the Pan Am Historical Foundation for bringing this rich history to our landmark jewel, to inform and enlighten the wonderful people who use our airport.
Many thanks,
Tony

Pan Am at the MAT 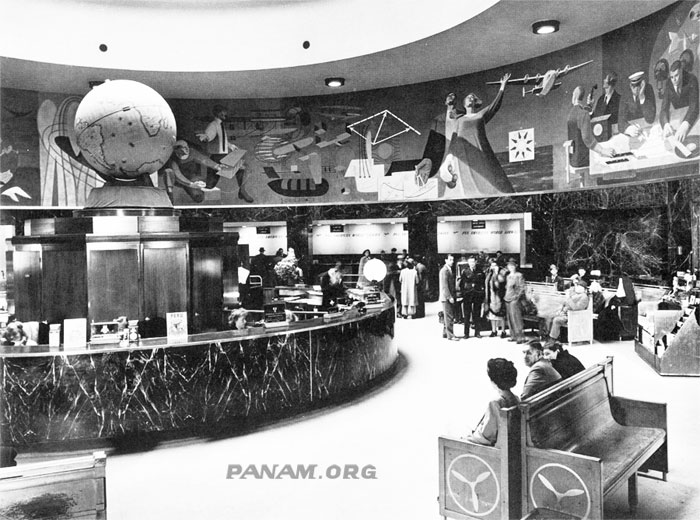