“The Man Who Saved Basketball” 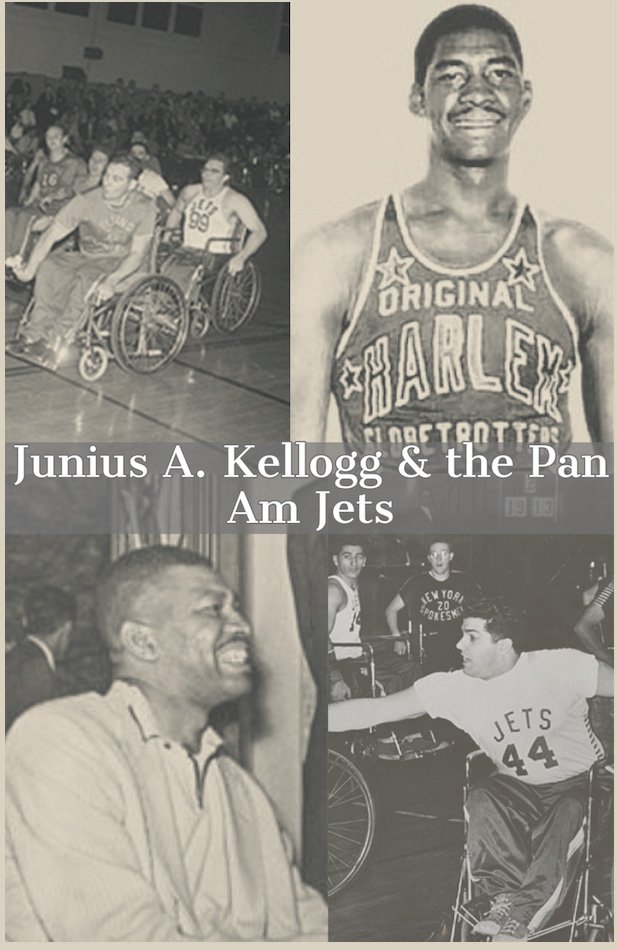 Who am I, and why would I be addressing World Wings International and the Pan Am Historical Foundation with an article about basketball? Even if you are not a sports fan, I think you will love this true story.

My name is Bruce Wolk, and I am a nonfiction writer who lives in Denver, Colorado. About 3-1/2 years ago, I began a fascinating project on the life of Junius A. Kellogg. I need to step away from my story for a second and mention two things: first, if you ever met Mr. Kellogg while a Pan Am employee, I would love to talk to you. I know it would have been a long time ago, but your memories are precious. Second, I will make a good argument that Pan Am is at least part responsible for the development and spread of wheelchair basketball throughout the world.

Preview from the book by Bruce Wolk, The Man Who Saved Basketball, scheduled for publication in 2019.

Out of great misfortune often comes a blessing. In the late 1940s, early 1950s polio fears had once again swept the nation, as another wave of the disease had broken out. James McGuire, the head of Pan Am’s accounting department, had a young daughter named Patsy. Patsy contracted the disease. In the overall scheme of things, she was one of the lucky. Initially confined to a wheelchair, she fought the disease and eventually taught herself to walk. It was near miraculous. Many children were nowhere near as lucky.

McGuire’s boss was Pan Am controller John Sylvester Woodbridge. Woodbridge’s life was similar to that of a Hemingway novel. In WWI he was an ambulance driver in France and he was badly injured. In his recovery, he developed a tremendous love and respect for injured veterans especially those with spinal injuries. Woodbridge also met many polio patients and he knew their fates were similar to those who suffered spinal trauma.

When he heard what had happened to McGuire’s daughter he was saddened. He was always concerned as to Patsy’s progress.

By chance, around 1952 Woodbridge accepted an invitation to a wheelchair basketball tournament between the Brooklyn Whirlaways and the Queens Charioteers. The sport was very new at that point, perhaps six years old.

As Woodbridge watched the game, an inspiration came over him. He wanted to form a wheelchair basketball team for Pan American World Airways. It would give something back to those who weren’t as lucky as he had been. He was also a shrewd business person. WWII and Korea had shaped America’s thinking. Creating a team to honor men with spinal injuries and polio seemed like a good marketing idea.

No other airline had thought of doing such a thing. He sold the idea to management, but then he went even further. He recruited men to work for Pan Am from the Whirlaways and Charioteer teams, as well as veterans with disabilities from the VA hospitals. He trained many of the men as junior accountants, computer support people and in reservations functions. They reported directly to James McGuire.

He gave many of these men purpose and meaning. It is no secret that even to the present day, those with mobility challenges are often judged and looked down upon. Back in the early 1950s, there might have been a lot of pity, but were almost no open options let alone “access” for people in wheelchairs.

They wore simple uniforms with logos on their wheelchairs. Indeed, the early wheelchairs themselves were heavy and clunky. Nevertheless, the “Jets” were inspired. They had something to prove.

They did well almost from the start, and in fact they adopted Patsy McGuire as their official mascot. She had an army of affectionate uncles, all in wheelchairs, all motivated by her courage. The team was a powerhouse in its first years. When their first coach decided to quit the company, no one knew quite what to do, but one of the players and Pan Am employees, a fellow named Saul Welger (later inducted into the National Wheelchair Basketball Association Hall of Fame) had a possibility, if the man would agree. His name was Junius A. Kellogg.

In his prime, Kellogg was a powerhouse. A graduate of I.C. Norcom High School in Portsmouth, Virginia, Kellogg (born 1927), he was the product of a segregated society. His high school had substandard facilities. Yet, as he was to grow into a 6’10” athlete, he not only proved himself as an exceptional basketball player but also a scholar. After a stint in the U.S. Army, he became the first African American basketball scholarship recipient at New York’s Manhattan College. An extremely moral and spiritual man, he helped uncover a massive basketball scandal in 1951.

Upon his graduation in 1953, Junius could not even get a tryout with the NBA due to the NBA’s “unwritten policies.” His dear friend Robert Otten, convinced Junius to take up a tryout offer from the Harlem Globetrotters. Reluctantly, Junius reported to the Globetrotters “camp” rather than to the NBA. Nevertheless, he beat out more than 40 players to make the squad.

Enroute to a ‘Trotters exhibition game in April, 1954, Junius was in the passenger seat of a teammate’s car when the rear tire blew. The car flipped at high speed. Of the five passengers in the car, only Junius was injured. His spine was ruptured and he fell into a deep coma. No one thought he would live.

Fast forward to the Bronx VA hospital in the fall of 1956. For more than two years Junius had pushed his body to regain function. Alas, he got some feeling in his hands and shoulders but he was essentially paralyzed from the chest down. Saul Welger visited him from time to time pleading with Junius to consider becoming a coach. At first, Junius respectfully declined. He held out hope that something would return to his legs. Finally, he nodded. Yes, he would think about it.

The telephone rang on the ward for Junius Kellogg in November 1956. It was it was John S. Woodbridge. Woodbridge officially offered Junius the head coaching position with the promise of a job in the accounting department.

Junius A. Kellogg became the first African American coach in the history of wheelchair basketball. He would lead the Pan Am Jets to the national championship in 1959. Junius and the team became international goodwill ambassadors for the sport – and by extension, for the airline itself. They traveled throughout the world. For example, in the Spring of 1957, they went to Brazil where they were met by more than 2,000 people. A little girl wearing leg braces (the grand-daughter of the former president), presented Coach Kellogg with a bouquet of flowers. She climbed onto Junius’ lap and melted into his massive hug. The country loved him as the team toured to large and small cities.

Because of Junius’ injuries he could not actually play the game. Nevertheless, when they played in Rio, the crowd screamed for him to come out on the floor and take a shot. He made it!

Junius coached the Pan Am Jets until 1964. The airline discontinued the team not long after, undoubtedly due to finances. Pan Am breathed life into Junius Kellogg and he and the “Jets” helped the airline. Pan Am had many fine moments in its history; the “Jets” were certainly a part of it.

If you would like to correspond, email Bruce at This email address is being protected from spambots. You need JavaScript enabled to view it. or through his website: www.brucewolk.com. The Man Who Saved Basketball is scheduled to be published in 2019.