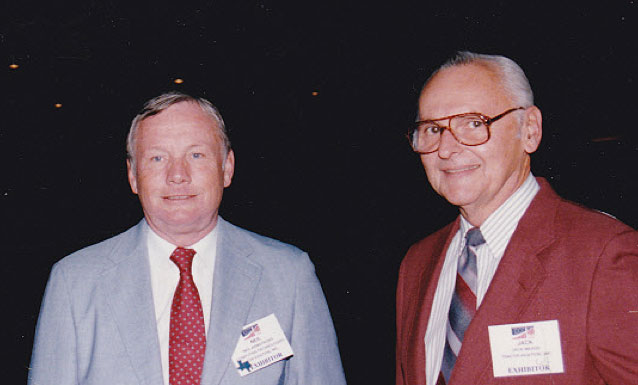 For 40+ years since the early 50's with Pan Am, Boeing, Douglas, Lockheed, and Tracor, Jack Meade's background in aviation engineering & aircraft marketing makes him eminently qualified to provide insights on commercial aviation at an exciting time in the industry.

I am 84 + years of age and still filled with memories of my working experience with Pan Am in the 1950s.  After graduating from Purdue with an aeronautical engineering degree, I obtained employment with the Latin American Division in the engineering department at Pan Am's Miami Overhaul Base in Miami in 1955.

Considered a prospect for future assignments, I was entered into the executive training program to gain experience in airline operations. One of my assignments was working for Capt. Dick Vinal, Chief Pilot Technical for the Latin American Division.

As one of four engineers reporting to Capt. Vinal, we were given an assignment handed down by Juan Trippe to evaluate both the B-707 and Douglas DC-8 recently ordered aircraft to determine which model was more suited to the Latin American Routes.  The same task was given John Borger for the Atlantic Division routes to Europe.
Computers had not arrived in the business office and our calculations had to be done by hand.  After collecting wind and temperature weather data, runway length and slope, and obstacle data from Central and South American airports, and using performance manuals supplied by the Boeing and Douglas Aircraft companies, over a period of many months, we prepared route payload and operational costs for the aircraft on all the LAD routes. In his infinite wisdom, Capt. Vinal preferred the DC-8 and so advised Mr. Trippe and Charles Lindbergh. Of interesting note, however, is the fact that subsequently, Capt. Vinal changed his preference to the 707 because the DC-8 had a longer fuselage length and he was concerned about possible tail dragging on takeoff due to higher rotation angles some pilots might use.

My experience with the world's best airline was a hallmark in my aviation career.

'Tis true that the DC-8 was favored by many. However, the same study we did at the Latin American Division was also done in the Atlantic Division, which Scott Flower (Dick Vinal's) counterpart conducted and Scotts' preference was the 707 whereas Vinal's preference was the DC8 although he changed his selection later.  Both were good airplanes and Juan Trippe was fair to both companies in his purchase.

Over the years Boeing became the preferred company because of the variety of models offered. Regarding the 747, it is a known fact that Trippe induced Bill Allen at Boeing to develop an airplane larger than the 707, so it isn't too much of a surprise that Pan Am ordered the aircraft.

Employee preferences are based largely on the culture of the airline. By this I mean that Boeing and Douglas built great aircraft and developed groups of airlines that were "in the family" so to speak.  Pan Am operated many Douglas models such as the DC-4, DC-6, DC-6B, and DC-7 series before acquiring any Boeing models and the Douglas model preference was very high and long enduring.

After my days at Pan Am, I worked for both Boeing and Douglas in aircraft sales and subsequently worked for Lockheed for 14 years as Director of the L-1011 Tristar sales. Enjoyed working for all 3 companies and in short, Lockheed was my favorite, Boeing next and Douglas last.

Lockheed was also a Pan Am favorite and built the L-1011-500 specifically for the airline.  It was a long-range, reduced-capacity model per Pan Am's specifications.