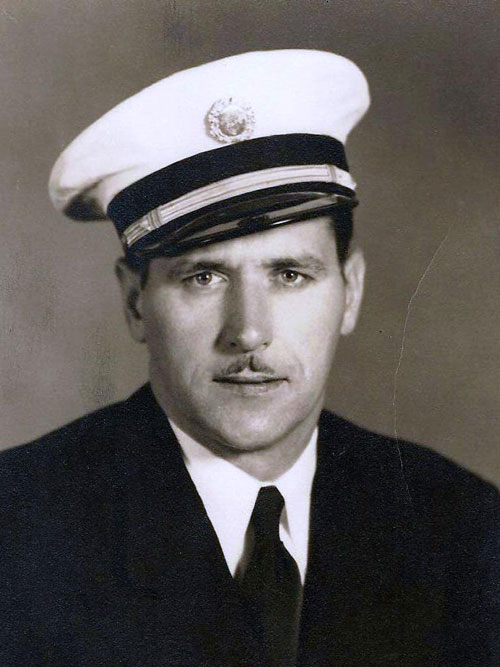 Leonard (Lindy) L. Johnson, my father, was born in 1919 and grew up near Pittsburgh, Pennsylvania. From an early age his hobby was building model airplanes and going to the local airfield to watch the real versions take off and land. His passion quickly earned him the nickname of “Lindy”, after Lucky Lindy, and later in life he had the pleasure of encountering his hero, Charles Lindbergh, many times.

His first job was in a steel mill but soon he enrolled in the Pittsburgh Institute of Aeronautics and got a job fueling aircraft at Pittsburgh Allegheny County Airport. When National Airport (now Reagan Washington National Airport) opened, Pennsylvania Central Airlines moved their maintenance base to to these new facilities outside Washington D.C. Lindy followed the move and started working there as a mechanic in 1941.

Later that year he heard that Pan American World Airways was hiring for Africa, so he went to New York and joined the company. His first overseas assignment was Accra, Gold Coast (now Ghana). He then went to Miami where he was named as an instructor in the Pan American Maintenance School, teaching both pilots and ground staff. His next assignment was in Natal (Brazil) the jumping off point to ferry aircraft to Europe and supply flights to Africa.

As part of the PAA/ATC Air Carrier division, in late 1943 he moved to Casablanca (Morocco) and to Karachi (India: Karachi was still part of India prior to the 1947 partition when it became Pakistan). When the division was disbanded he returned to New York and was subsequently assigned to Dakar (French West Africa) as a dispatcher for PAA and Panair do Bresil. The US Air Force discharged Lindy and decorated him with medals for Africa, Europe and the Far East.

In late 1946 he was assigned to Johannesburg where he opened the station for the PAA maintenance section. In 1948 he was posted to Leopoldville (Belgian Congo) as the PAA Station Manager. There he met his future wife, a Belgian girl, whom he married in 1950. In 1951 he became Assistant Airport Manager (PAA) at New York’s Idlewild airport. From 1952 until 1954 he was relief station manager at various locations, including Boston (USA), Barcelona(Spain), New Delhi(India), Karachi(now Pakistan), Basrah (Iraq), Hannover(Germany) and Vienna(Austria) - the latter still under tri-partite occupation with the airport located in the Russian occupied zone.

In 1954 Lindy went to Copenhagen (Denmark) where he trained a Danish national Station Manager. Later that same year, after another short stint in Hannover (Germany), he and the family moved to Amsterdam where he became the Pan Am Director for the Netherlands and stayed for 9 years.

This was followed by 6 years in Thailand as Pan Am Airport Manager and later as Director for the company, during which time he also served on the Board of Directors and Executive Committee of Aerothai (an airline/Thai Government communications consortium). From there it was on to Liberia as Director of Liberian Airports and Facilities. At his request he returned to New York from where he was re-assigned to Hawaii. In early 1972 he opted for early retirement from Pan Am and started a new career in airport development.

After a year in Oman as Advisor on airports to the Sultanate, on behalf of ICAO, he joined Northrop Airport Development Company (NADC) as Site Manager for a new national airport in Bangkok (Thailand). During this time he was able to share some of his vast experience and deep-rooted passion for aviation by teaching airport courses at the Northern Virginia Community College. When NADC was disbanded he joined R.M. Parsons as a consultant and wrote the management, operations, maintenance and emergency procedure manuals for a new Airport in Jeddah (Saudi Arabia).

Later he was posted to Yanbu (Saudi Arabia) to manage air and ground transportation and open a new regional airport for the Royal Commission. At the end of his contract and coming full circle until his retirement in 2008 Lindy was the Airport/Airline Coordinator at Reagan Washington National and Dulles International airports.

Lindy, now lives with his wife and daughter in Switzerland. He still loves airplanes and airports, keeping his passion alive by reading industry journals and discussing the latest industry trends with his daughter who is involved in the sector. Leonard (Lindy) L. Johnson is featured on the Wall of Honor at the National Air and Space in Washington DC as his personal values and long standing career personify all that is good and great with aviation: commitment to an ideal, courage and steadfastness tinged with a hint of the dreamer.