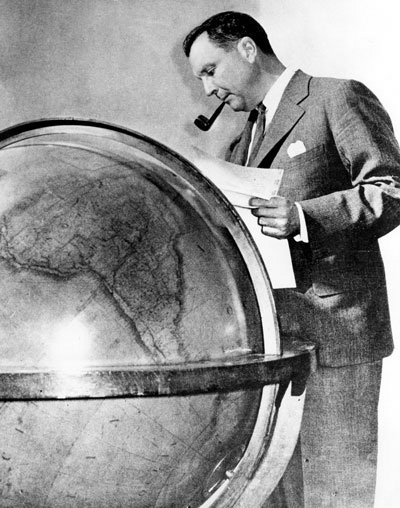 The annals of commercial air transport are filled with illustrious names - some remain known to generations long after the actual people have passed on. But it's no exaggeration to say that one individual truly belongs in a class by himself.

Had there never been a Juan Terry Trippe, the whole evolution of the air transport system we take so much for granted now would have been very different.

Take jets, for example. In the mid-1950's virtually all airline decision-makers - that is, all but Pan Am's Juan Trippe - were contemplating an easy and gradual transition from the proven and reliable fleets of piston driven airplanes they were still buying, to the eventual use of turbine-powered planes. But Trippe saw an opportunity no one else could visualize. It was assumed that the future was going to mean jet travel for the masses someday, but only he could see that future was only two or three years away.

Never mind that the spectacular failure of the first generation British Comet jet transport (beautiful, but fatally flawed) had left the world deeply skeptical of the future for civilian jet transports. By dint of his commanding vision, business acumen, persuasive personality, and not least his gambler's risk-tolerance, Juan Trippe re-ordered the universe of commercial air transport. Boeing's Bill Allen and Donald Douglas were artfully maneuvered into creating stunning new jet airplanes to match Trippe's vision for Pan American and in short order, the rest of the world's air carriers were forced to follow his lead. Before the '50's were over, there was a new standard for air travel - years ahead of what had been previously accepted as state of the art. The "jet-age" 1960's would simply not have been without Juan Trippe.

This is only a single example of what Juan Trippe meant to the world. His accomplishments and historical stature deserve a wealth of informational resources, and to that end we are pleased to provide these links to sources that point to his life and accomplishments.  Link to Slideshow

Smithsonian.com
Why does the 747 Have a Hump?
By Owen Edwards

Pan American World Airways: Aviation History in the Words of its People (by James Patrick Baldwin & Jeff Kriendler, with Leslie Giles)
Juan Trippe's Assistant by Kathleen Clair
A chapter from the anthology.