The shadows were just beginning to lengthen through the thick air at New York’s Idlewild International Airport on the afternoon of Friday, July 25th, 1958. The day was even hotter and muggier than the day before – with afternoon temperatures reaching into the 90’s. The passengers on Pan Am’s Clipper Flight 150 had to endure a last blast of the heat as they walked across the tarmac to the waiting aircraft that was about to carry them off to Lisbon. 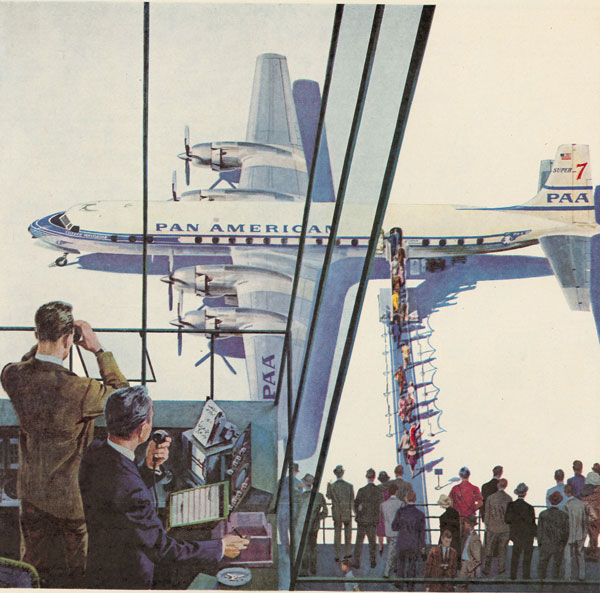 The aircraft was one of Pan Am’s DC-7C’s. They represented the zenith of piston engine commercial air transport. The four Wright R-3350 engines that powered the “Seven Seas” as they were known boasted more horsepower than any earlier versions of the same engine, a design that traced its pedigree back to the mid-1930’s. R-3350 engines had powered the mighty B-29 bomber fleets that ruled Japanese skies at the close of WWII, as well as Lockheed’s graceful Constellations.

With the introduction of the “Seven Seas, non-stop transatlantic trips both east and west-bound were now standard. They could even skip the once usual fueling stop in Gander, Newfoundland on westbound flights from Europe, with their 4,000 mile range. 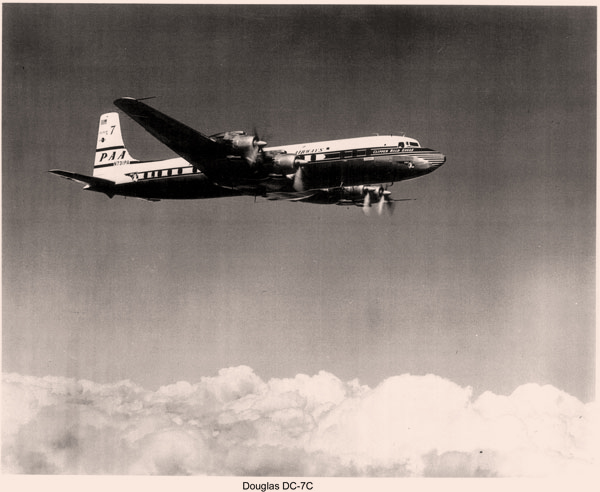 A “Seven Seas” in its natural element (Photo: Pan Am Historical Foundation)

But if the airplane had range, those four big Wright engines demanded careful management. The engine had evolved greatly since the days when they sometimes ingested their own valves, and started fires that could set alight the magnesium alloy of the crankcase. Those fires could quickly reach catastrophic temperatures of over 5,000 degrees, burning through wing spars in the process. By the time they were powering the DC-7C’s, the engines had been greatly improved, but they were still very complex machines demanding assiduous oversight in flight.

Likely this was not on the mind of Captain Robert Dean Postlewaite during his drive down from his home in Wilton Connecticut earlier in the day. He was turning 42 that very day, but a birthday celebration would have to wait. He was pilot in command for a run to Portugal leaving that afternoon. The flight could be expected to take just over ten hours, and with any luck he would be back home by Tuesday night, on the return flight. 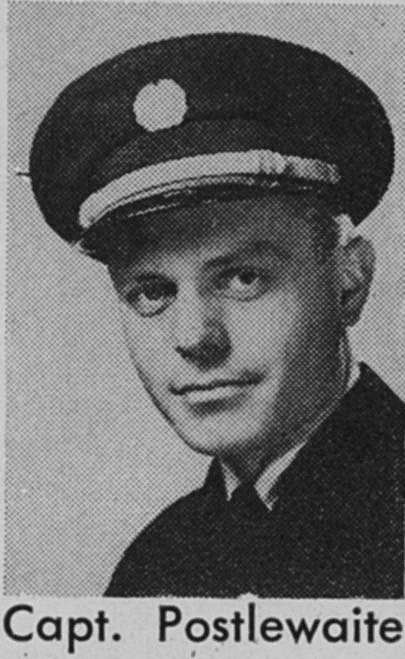 Dean – he went by his middle name – was an eighteen-year veteran of Pan Am, having signed on with the airline just before the US got into WWII. His crew – nine in total including himself – would be looking after a light load of 36 passengers. The plane had capacity for well over twice that many. There were two VIP’s onboard, Mr. Seymour Berkson, publisher of the New York Journal-American newspaper, and his wife, Eleanor Lambert who was a luminary in the fashion world. The overnight flight trip should have been easy for everyone.

But it didn’t turn out that way.

“Wheels up” from IDL was at 3:42 pm. For reasons lost to time, Flight 150 made an unscheduled stop in Gander, but it was only a short stay. Soon the big plane was off again, heading east over the Atlantic.

The trouble began not long after 8 pm. The number two engine began running rough, and the problem persisted. Then at 8:32, Capt. Postlewaite decided it was best to shut it down and feather the prop on the malfunctioning engine. This would turn the edge of the propeller blades into the airstream, minimizing their surface area facing the air racing by, and dramatically reducing their drag. Even more critically, feathering the prop would prevent “windmilling.” When this happens, the propeller blades are pushed by the airstream, causing the propeller to spin, just as the term implies. They would no longer be creating thrust, but instead would rob the area of the wing behind the windmilling prop of lift, drastically altering the aerodynamics of the airplane for the worse. A feathered engine was definitely a cause for concern on a transatlantic flight, but a windmilling prop was a true emergency.

When Postlewaite tried to feather that propeller it didn’t work. Instead, the propeller’s drive shaft instantly sheared in two, disconnecting it from the big engine behind. Now the propeller “ran away,” and it started to windmill totally out of control.

Dean Postlewaite now had a real problem on his hands, and he declared an emergency. The flight was just over 100 miles away from the US Coast Guard ship standing iceberg watch on Ocean Station Delta. The plane, which was flying at 19,000 feeet, began to sink rapidly towards the Atlantic below, quickly losing 15,000 feet of altitude in a matter of a few minutes. Not sure if he could keep the plane in the air, the captain thought ditching the plane seemed like an entirely likely scenario. But even in July, bringing the plane down in the ocean was the last thing he wanted. He flew on to rendezvous with the Coast Guard cutter as the plane wallowed and lost altitude. 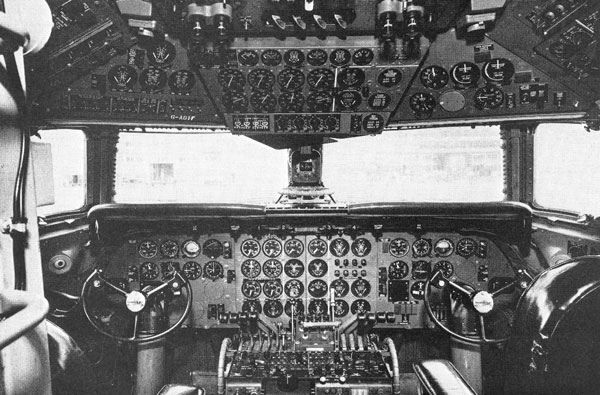 A long day in Capt. Postlewait's “Office” –  A Cockpit of a DC-7C (Photo: Pan Am Historical Foundation)

But then the picture improved. Down in thicker air, the Clipper’s flight characteristics began to stabilize, although flying a lot lower and slower. She regained a little altitude, but Postlewaite could only safely manage 115 miles an hour – a lot slower than the normal 350+ mph cruising speed. He said later:  “Once I found I could hold her and even climb a little, it was an easy decision to leave that Coast Guard vessel behind us and head toward shore. Until I was certain we could hold the plane up, however, I had stick around the boat.”

With things under control, he made the decision to try for the US Navy base at Argentia, Newfoundland, 460 miles away.

In the meantime, the world had caught word of the drama taking place over the ocean. A nearby Sabena Belgian Airways flight on its way to Shannon heard the Clipper’s distress call, and altered course to fly close to be of whatever assistance it could. And soon other help was on the way, scrambled from bases in Canada. The pick-up squadron included two RCAF Lancasters, two US Coast Guard Air-Sea rescue B-17’s, and one US Navy radar picket Constellation.  The crippled Clipper had plenty of company on what would be a long flight to safety.  And back in the US, news reports began to be flashed to anyone still awake. 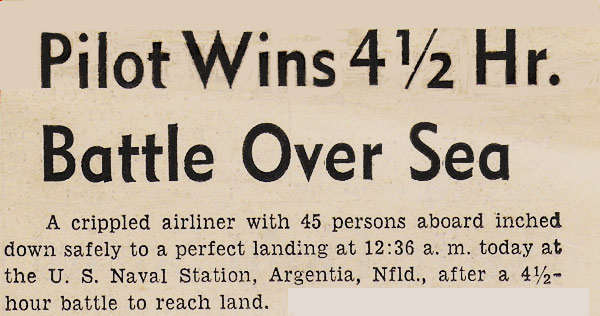 As it happened, that did not include Dean Postlewaite’s wife Betty – who had been one of Pan Am’s first stewardesses herself – or their three young children: Ellen, Susan, and Neil. They had all gone to bed early that Friday night.

The Clipper reached the base at Argentia at 12:35 am. The six crash trucks, ambulances, and other emergency equipment that were standing by proved to be unnecessary, as Postlewaite made a perfect landing. All aboard were safe and sound.

Pan Am already had a replacement aircraft on the way, to carry on where the original flight had unexpectedly ended. Soon all 36 passengers would be back on their way to Europe, with an exciting story to tell for years to come.  Postlewaite and crew would fly the crippled Clipper back to IDL.

The praise for Dean Postlewaite and his crew from the passengers on Flight 150 was universal. Publisher Berkson was quoted as saying:“The captain was brilliant, and the crew was perfect!”  He mentioned how Postlewaite had kept the passengers updated throughout the night, always in a calm way.

Later Dean downplayed any hint of personal heroics. His perspective focused on the training he and the crew had received. “We go through so much training at Pan American – over and over - that we are always ready for an emergency,” he said. 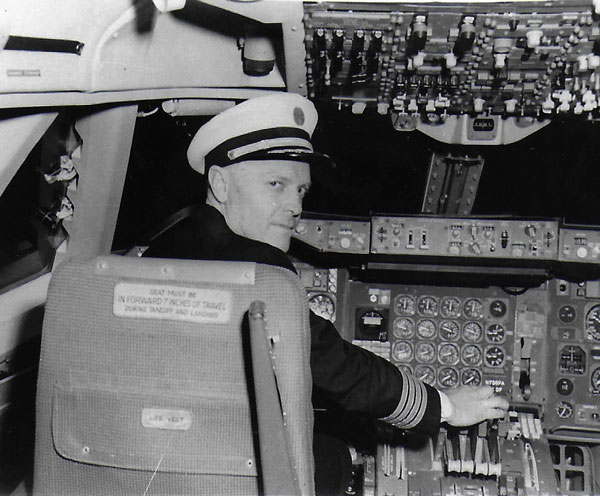 Back at home in Wilton, CT, Betty had been awakened by a phone call early on Saturday morning. She and her three children had gone to bed early the night before, unaware and oblivious to the danger Dean was facing far out over the Atlantic.  When she was awakened by the call from a Pan Am official that next morning, she learned all about the happy ending to the story – which was the first she had heard about any of it! The news left her feeling very unsettled, and her concerned neighbors were soon gathered in the kitchen to lend support. But in the end, It was a big - - and welcome – finale to the episode for the whole family, and Dean was back home soon for his missed birthday celebration. 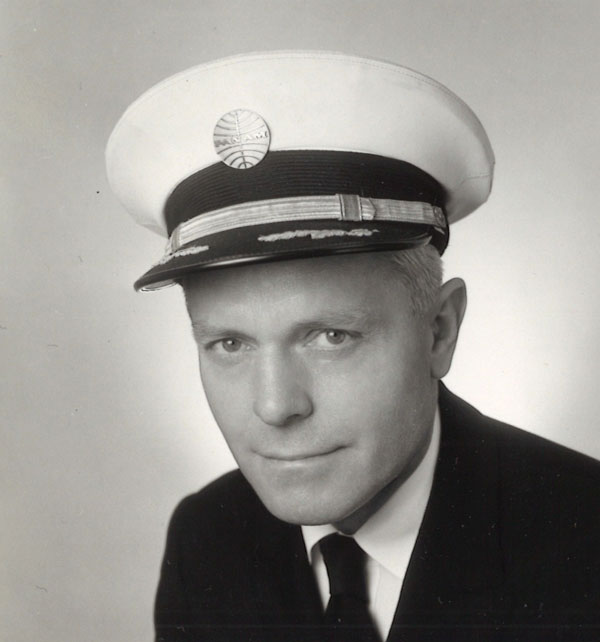 Many thanks to the Postlewaite family, and the staff of the Otto G. Richter Library’s Special Collections Department at the University of Miami for their assistance in creating this article.