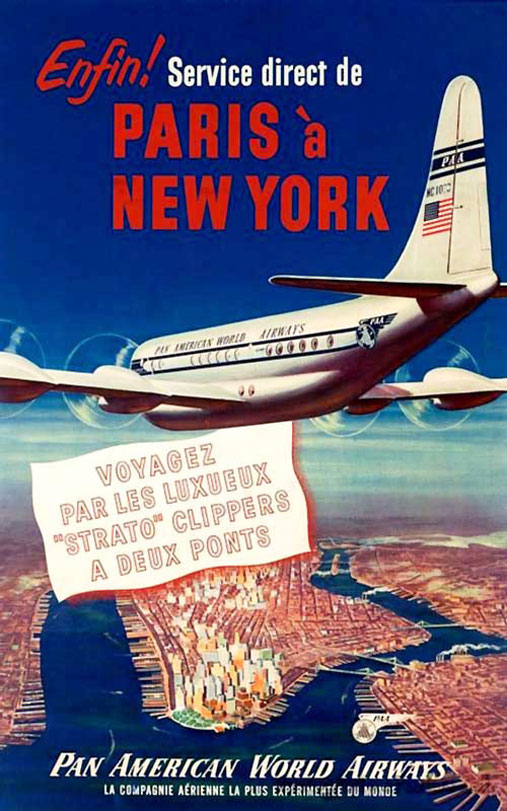 Excerpted from “Around the Town” in The Telegraph, Nashua, NH, December 16, 1957

A restaurant service which extends for 65,000 miles, embraces 82 lands and each year caters to the tastes of almost 3,000,000 travelers,representing every race, religion and nationality is operated throughout the world by Pan American World Airways.

Serving more than 12,000 meals aloft every day, Pan American has developed a unique and intricate system of food preparation, preservation. distribution and service which assures passengers boarding flights even in remote corners of Africa and Asia of meals comparable to the best served in New York or Paris restaurants.

This worldwide, airborne catering service unlike any other food establishment in the world, is described by Kenneth Parratt, Director of Passenger Service for the airline, as an important aspect of service that la making Pan American a sort of "Claridge’s of the air.”

“Pan American's cuisine is international in character with the universally accepted French accent in preparation,“ Mr. Parratt says. "Of all the national food characteristics the French have achieved the most universally accepted method of preparation. This is due not only to the superior culinary skills of the French but to the fact that French food encompasses such a broad range of international preferences."

From this basic philosophy of an international cuisine with a French accent came the marriage of Pan American and Maxim’s of Paris. Maxim's provides the airline with its 60 years experience in catering to international gourmets and Pan American supplies the latest technological improvements in food preservation and distribution.

Brightest child of this marriage of French tradition and American efficiency is the President Special service operated between New York and London and Paris. The President Special, pride of both Pan American and Maxim's, offers the highest standard of dining room elegance and a range of menu selections not found anywhere else aloft.

On flights restricted to 43 passengers with five cabin attendants assigned to their service, such food innovations as hot hors d'oeuvres are served during cocktail time, but the pièce de résistance of the President Special is the main course or rather any one of three gourmet selections.

President Special passengers have their choice of filet mignon, roast duckling bigarade or Lobster “Américaine." On another day the choice might be between filet mignon, rock cornish game hen or lobster. Another combination features filet mignon, lobster and roast pheasant. Nine basic menus are prepared for first-class transatlantic flights with a new selection every day for nine days. 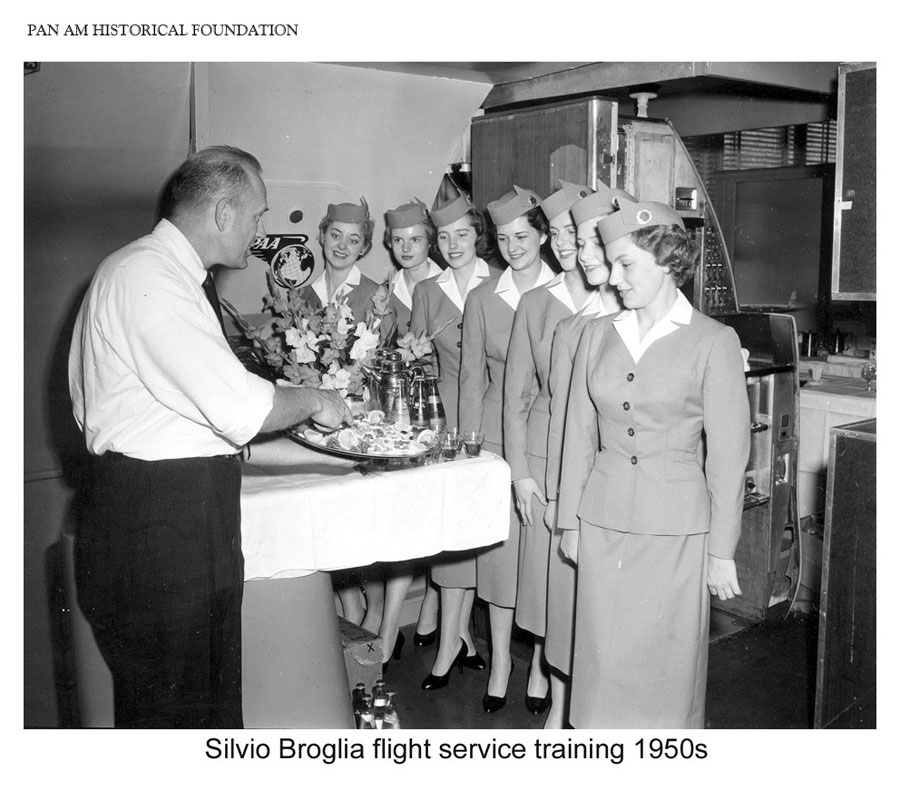 Pan American’s food officials have found in their surveys that prime charcoal broiled steak still rates a three to one favorite as an entree and note, a little wistfully, that it remains and will remain on every first-class menu despite the airline's claim that it offers the only choice of three entrees in transatlantic service.

Are all of these delicacies and fine wines served on a tray deposited on a pillow in the passenger’s lap in the manner so familiar to airline travelers?

Ask this question of anyone in Pan American's food service department and about the same result will be produced as asking the headwaiter in a first-class New York restaurant for a bottle of ketchup. The pillow in the first class service has been relegated to where it belongs — under the head of sleeping passengers.

Tables set with gleaming linen clothes and highly polished silver have taken its place and plastic dishes have been replaced with Rosenthal China for President Special passengers. The stewardess serves each plate individually from a tea cart rolled up the aisle, allowing the passenger to select the steak done to his choice or the game hen that suits his fancy.

It All Begins on the Ground

Behind this gourmet service is a myriad of detail and preparation. Airline schedules demand split second timing and the compactness of equipment on even the largest aircraft demands precision design and stowage.

A President Special flight requires 1,295 items of food for 43 passengers and ten crew members and 3,385 separate items for preparing and serving this food. (Note: items of food are counted as portions. Even Pan American efficiency does not go so far as to count peas.)

For a President Special flight scheduled to depart from New York to London at 4 pm, a commissary crew at New York International Airport begins before dawn to assemble, wash, polish and shine each item of service equipment. Another crew has started to assemble and sort the food in a special refrigerator.

Before the food and supplies go aboard the aircraft just before takeoff, they have been carefully counted and checked by a supervisor to make certain that, for instance, there are exactly 112 fresh eggs aboard which will be cracked and cooked in the galley the next morning just about the time the Irish coast is sighted. Pan American is the only airline that prepares fresh eggs to order aloft. 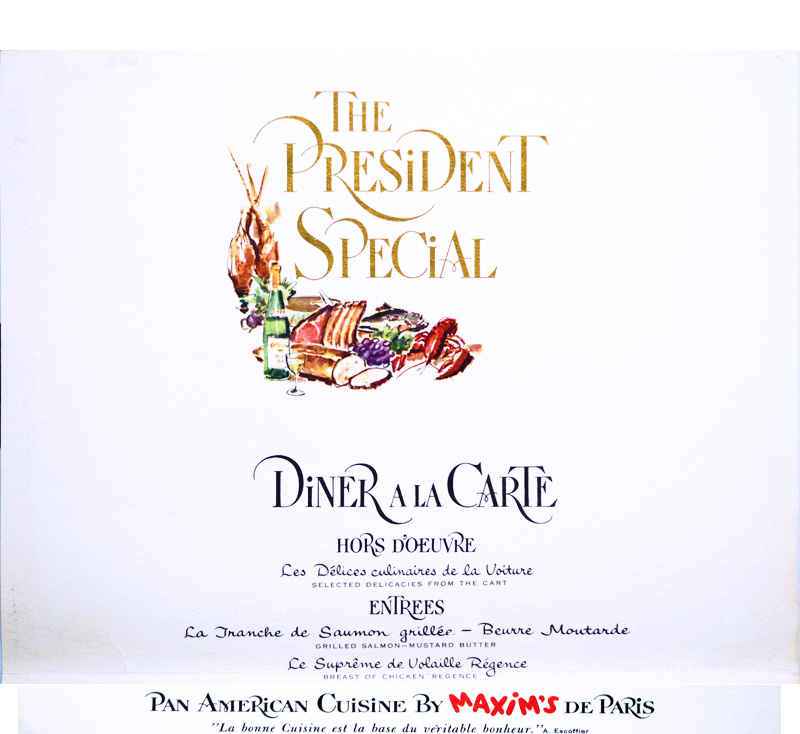 Behind this port stewards’ group at Idlewild stands the flight kitchen at La Guardia Airport. Here 9,182 pounds of meat, 3,093 pounds of fish and 19,448 pounds of vegetables per month are purchased, cooked and frozen at Pan American's own freezing plant, largest of its kind in the airline industry and one of the largest in the world outside the commercial food packing plants.

This kitchen prepares an average of 1,500 frozen meals per day and is one of the important centers in a system of food logistics that supplies food throughout the world.

"Fast freezing,” Mr Parratt says, "is the secret of operating a global airborne restaurant and at the same time maintaining uniformly high standards.”

Pan American in its Pacific-Alaska Division has food kitchens at stations such as Wake Island where freshly cooked food is put aboard flights, and kitchens are also maintained at points in the Latin American Division. Frozen food, however, is the backbone of provisioning in the far-flung Atlantic Division which serves Africa, the Middle East and India as well as the European continent.

Mr Parratt explains that frozen food is a necessity on these routes for two main reasons: 1) a high quality of fresh food cannot be obtained at all stations and (2) cooking and food handling standards cannot be maintained at a sufficiently high level to guarantee the passenger the quality meals he has come to expect.