Air Travel For All 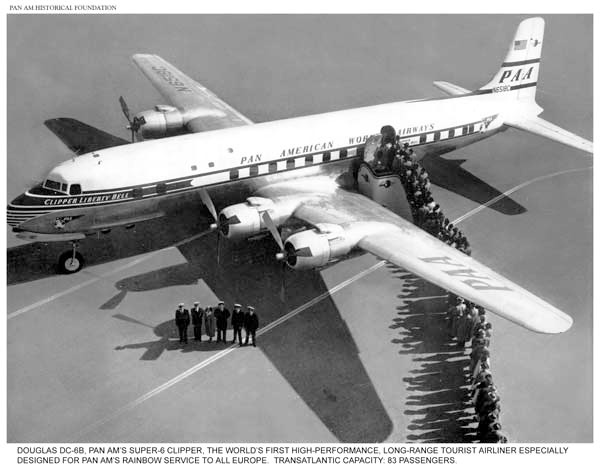 Long before jets, Juan Trippe wanted to develop a tourist class service. He described his ideas in a speech in New York City as early as May 1943:

"Air transport does have the choice . . . of becoming a luxury service to carry the well-to-do at high prices - or to carry the average man at what he can afford to pay. Pan American has chosen the latter course."

Lower fares and faster routes provided quick and less expensive trips for many travelers on propliners. The DC-6 "Super Six" was the first plane ever designed for low-cost passenger service in 1952.

By 1955 Pan Am had unveiled the DC 7 "Super Seven, described in this June 1955 Nashua, NH editorial column:

"Pan Am... has put into service a Super 7 Clipper, adapted from the luxury DC-7 for its over-ocean non stop tourist service. This ship is said to be the fastest, most comfortable of any all-tourist planes and has a greater range... On them you can fly to Paris in 11 hours, a saving of an hour and half from the old schedule. Just think that it wasn't so long ago that it took you much longer to fly across our own country." 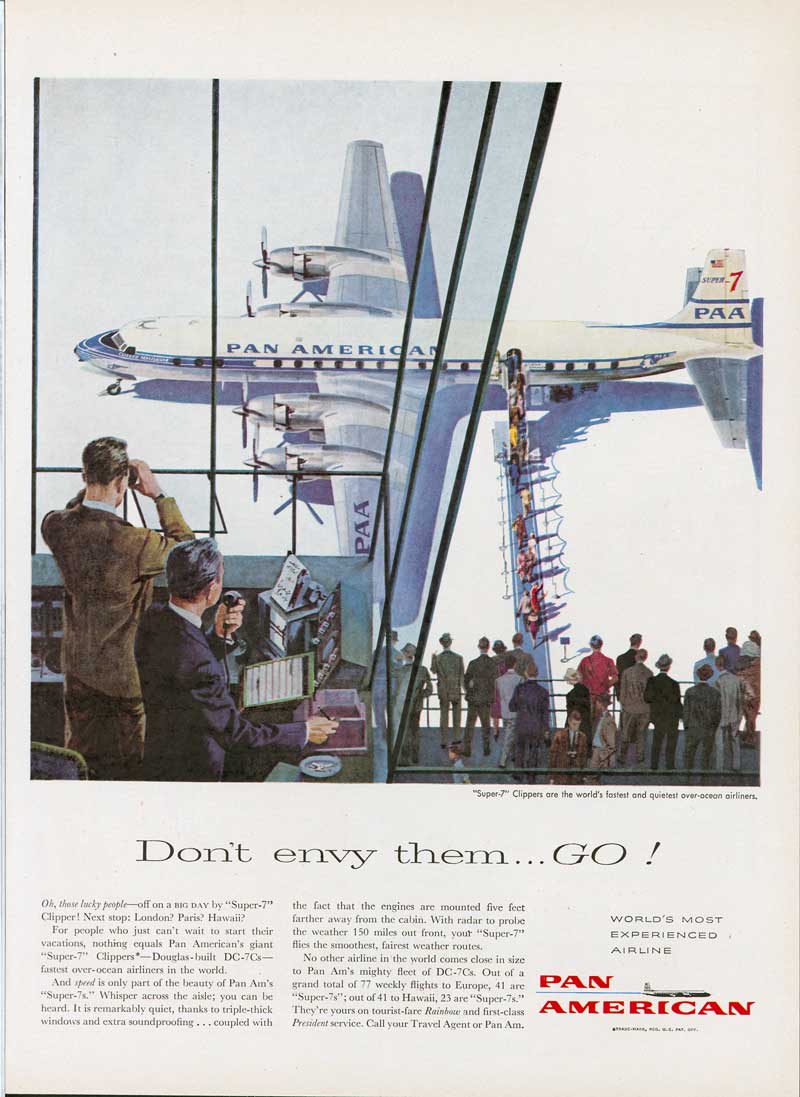 When Pan Am opened roundtrip DC-7C flights from California to London via the new "Polar Route," September 10, 1957, the trip got even faster. Tourist class fare at that time was $720 and by 1958 fares got even lower, just before the debut of the 707s.

Richard Branson succinctly summed up the history of Pan Am's early tourist class travel in a December 07, 1998 TIME article, Juan Trippe: Pilot of the Jet Age -- Though he made flying seem glamorous, Pan Am's founder really helped the rest of us get onboard.

Branson wrote:
"Before anyone else, [Juan Trippe| believed in airline travel as something to be enjoyed by ordinary mortals, not just a globe-trotting elite. In 1945 other airlines didn't think or act that way. Trippe decided to introduce a "tourist class" fare from New York to London.

...This went over like a lead balloon in the industry, where air fares were fixed by a cartel, the International Air Transport Association; it didn't want to hear about the tourist class. Incredibly, Britain closed its airports to Pan Am flights that had tourist seats. Pan Am was forced to switch to remote Shannon, Ireland. The industry's aversion to competition and making travel affordable was to have a long life, as Sir Freddie Laker would discover in the 1970s and Virgin Atlantic nearly a decade later.

Trippe managed to find one route where the cartel could not thwart him: New York to San Juan, Puerto Rico. Pan Am's one-way fare was $75, and the flights were packed. Finally, in 1952, Trippe's relentless attacks on the I.A.T.A. forced all airlines to accept the inevitability of tourist class. But by then his vision had taken off for its next destination.

Flying the oceans was still mostly for the rich and famous. For millions of others, it was just a dream or a once-in-a-lifetime binge. Trippe saw that the jets being introduced by Boeing and Douglas could mark the end of that, and he ordered plenty of them. In October 1958, a Pan Am Boeing 707 left New York for its first scheduled flight to Paris." 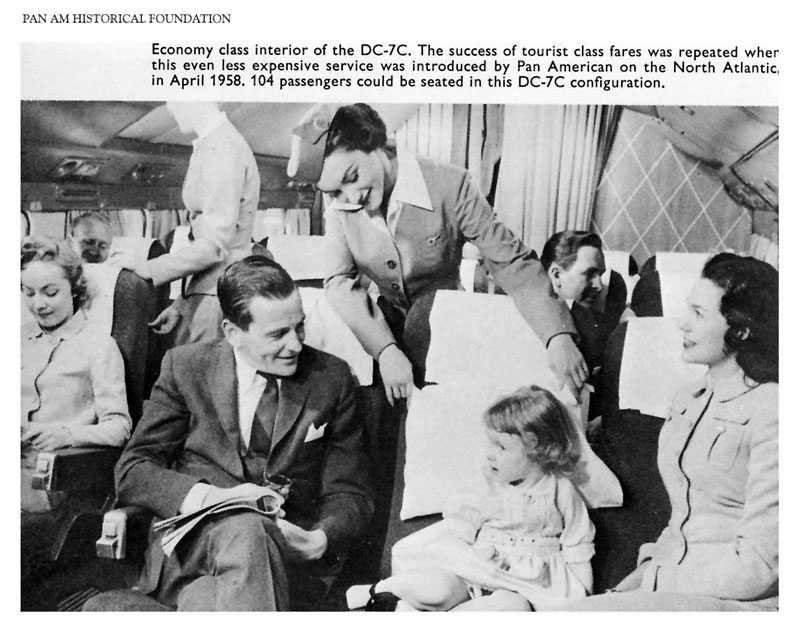