One of Pan American Airways' most epochal achievements was the successful initiation of true transoceanic commercial air service in the 1930's - first across the Pacific in 1935, with Atlantic crossings coming four years later. Those historic Pan Am milestones are now tangibly preserved through written accounts, airmail covers, photographs and motion pictures, transcribed radio recordings, and all too few living memories. Of course no Pan American aircraft grace the sky above the world's oceans now, but that's not to say that there's absolutely no trace left of Pan Am IN the oceans. 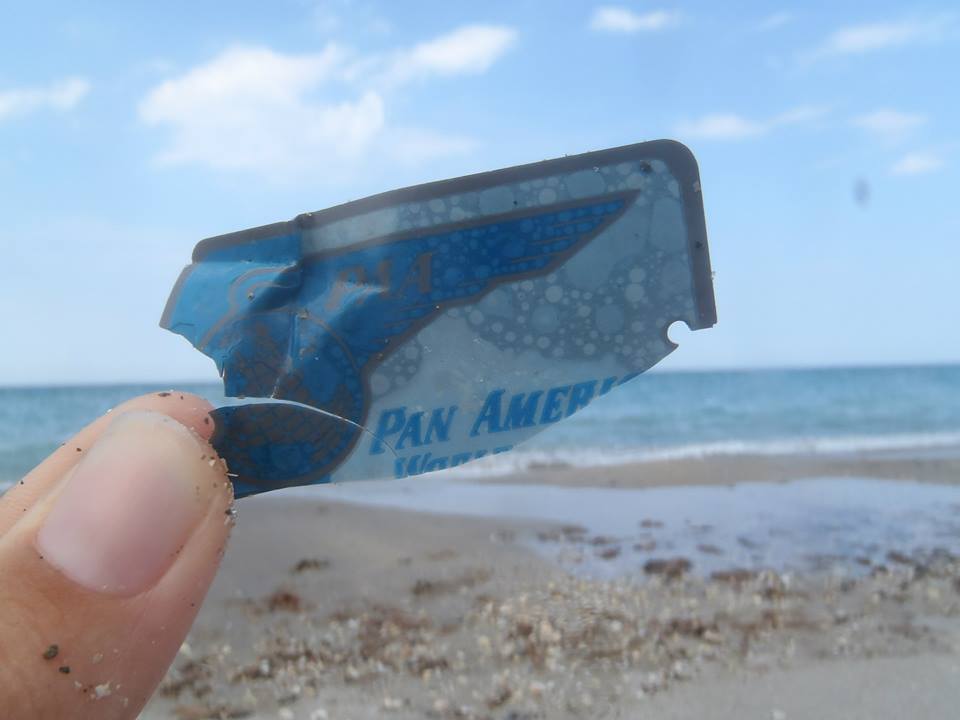 When Hurricane Cristobal churned its way up the Eastern Seaboard of the U.S. in August 2014, it might have dislodged a remnant of an old Pan American World Airways luggage tag. Coastlines are always in motion - sometimes eroding, sometimes accreting, and today's beach may well be different tomorrow. The sturdy plastic bears the identifiable "winged globe" logo and lettering style used by Pan Am in pre-jet age days - roughly up to the mid-1950's. 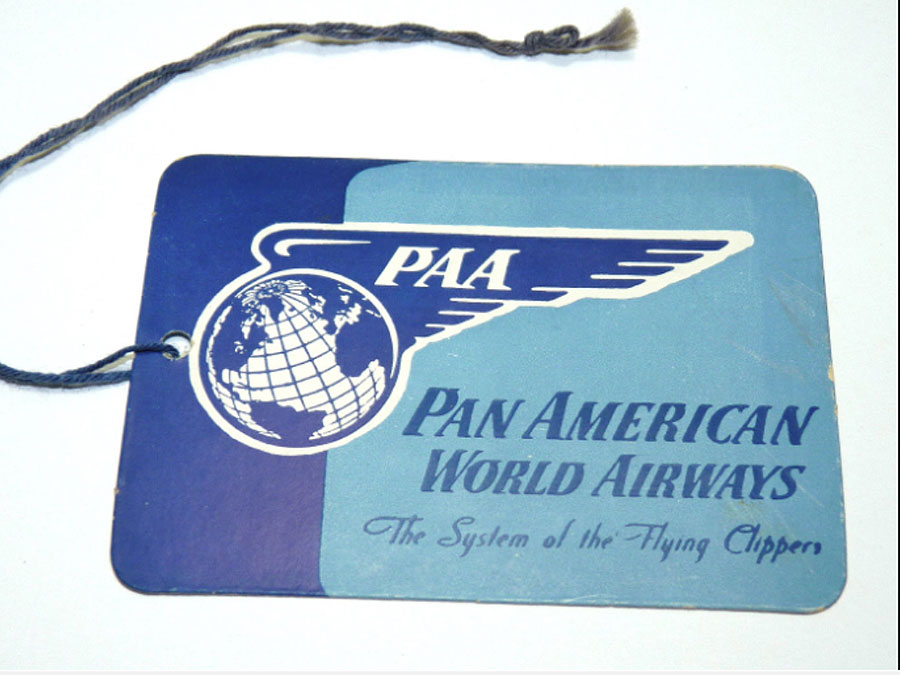 An original Pan Am luggage tag 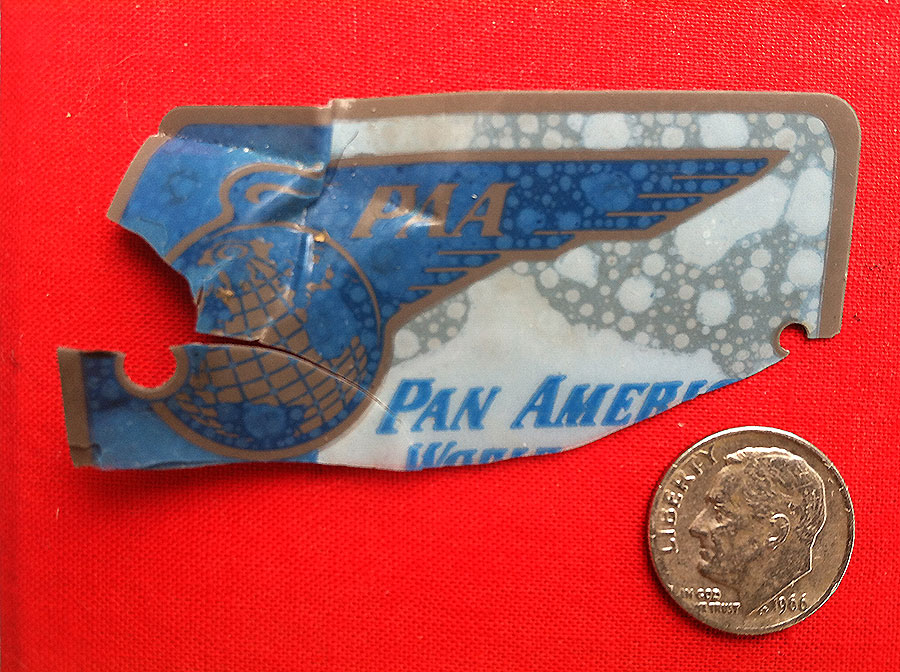 Close up of the  Pan Am tag found at Hutchinson Beach, Florida

The item was discovered by members of a group of organized beachcombers who regularly work the beaches of Florida's East Coast, on a mission motivated both by cleaner coastal environments, as well as science. Laying on the sands of Hutchinson Island, a barrier island near Stuart, Florida,the mottled blue and gray colors of the old tag stood out - clearly something that didn't belong to the natural surroundings. How did it get there, and how long had it been there? Impossible to say. The sixty-something year-old tag wasn't likely to have been dropped there recently on the beach, it must have arrived by sea. The fact that no marine growths adhered to it suggested that it hadn't been in the sea lately, but likely was recently dislodged from the beach by wind or tidal action. 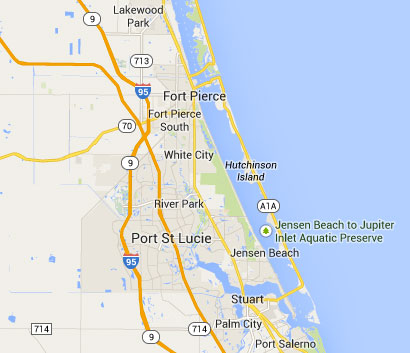 One very speculative suggestion was that it was a luggage tag that survived the ditching of Pan American's Clipper Endeavor, a DC-4 that ditched just off San Juan, Puerto Rico in 1952, after experiencing rare twin engine failures just after take-off.  Wikipedia article on Pan Am Flight 526A 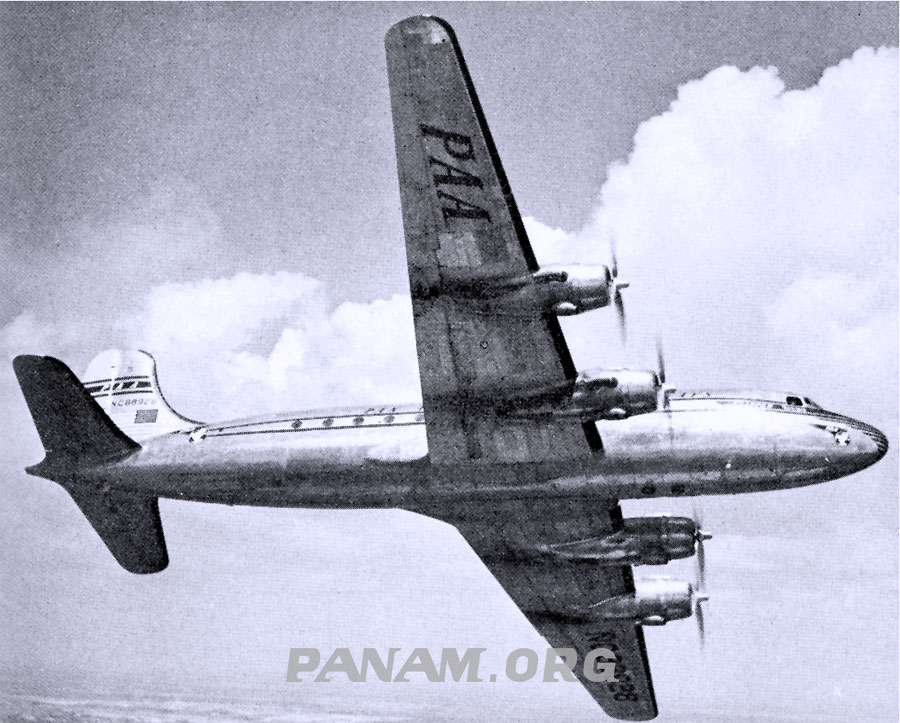 Illustration of a Pan Am DC-4 in flight

In a weird coincidence, the pilot, John C. Burn, had been the first officer on the Yankee Clipper the day the B-314 flying boat crashed on landing on the Tagus River in Lisbon, nine years before. As with the earlier accident, he survived his second brush with fate, as did all the other crew members. Sadly, 52 passengers were unable or unwilling to leave the sinking aircraft, and perished.

It's just possible that the old luggage tag survived the sinking of Clipper Endeavor, and found its way to the Florida beach via the currents that sweep northward from the Antilles, perhaps to be buried and then uncovered years later. 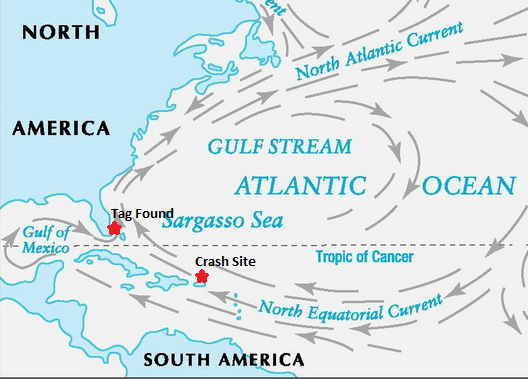 The finder of the old Pan Am tag is a member of "Balloons Blow - Don't Let Them Go," a group who regularly patrol beaches cleaning up the plastic garbage that winds up on seashores all over the world. (Check out Balloons Blow on Facebook!)

The work has scientific overtones too, in that identifiably-sourced material can reveal something of the ocean currents that were responsible for its delivery. This "crowd sourced" informal information gathering has "ballooned" in popularity, in part thanks to the work of Dr. Curtis Ebbesmeyer, father of the field of "flotsametrics", whose pioneering work has led to new insights and appreciation for how human activity interacts with our planet's oceanic circulation system.

And thanks to "Balloons Blow", the old Pan Am luggage tag is now no longer part of human-sourced ocean litter (along with uncounted amounts of other trash they and others have collected and removed from beaches). Of course, the oceans are still burdened with vast amounts of other floating debris, including perhaps an infinitesimal bit bearing Pan American Airways markings. If you get out to a nearby beach to pick up some with "Balloons Blow" or just on your own, you might discover something interesting too, and certainly be doing the planet a favor.

Information and Photos were provided by Tom Pitchford, Balloons Blow.