On April 7, 1931, Panair do Brasil’s Assistant Communications Superintendent, James Shattuck, called PAA Radio Operator, Hans Frederick “Fred” Due, into his Rio de Janeiro office to confirm that Due was still willing to join the unusual crew assignment he was developing. Shattuck had briefed Due several days earlier about an open-ended charter assignment in Brazil’s western frontier, Matto Grosso, flying a group of American sportsmen, filmmakers, and scientists (The Matto Grosso Expedition) throughout South America’s geographic center, a sparsely populated, isolated region home to exotic flora and fauna, possibly hostile indigenous populations, and not a single airport.

As part of a three-person crew aboard PAA’s Sikorsky S-38, NC146-M, Due would provide continuous radio contact between the aircraft, their client’s scattered activities, and PAA centers in Rio de Janeiro and Para.

Superintendent Shattuck handed Due a two-page memo on PAA stock summarizing all the assignment’s details. 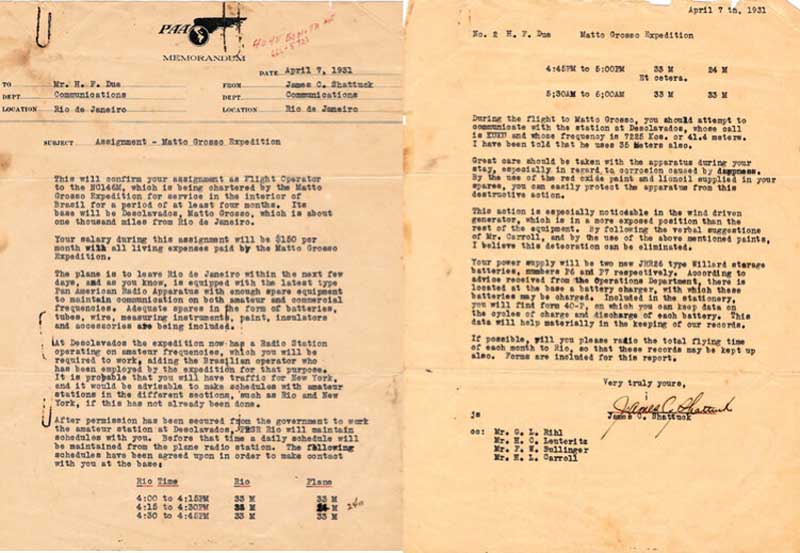 Since joining PAA nearly a year and a half earlier, twenty-nine-year-old Due had proved adept at all assignments. Having flown Panair do Brasil’s Para-Rio run in Consolidated Commodores since December 1930 he knew PAA’s entire existing Brazil operation. Hans was competent. However, selection for this charter job reflected more than Superintendent Shattuck’s appreciation of Fred Due’s skills as a radio operator and flight navigator. 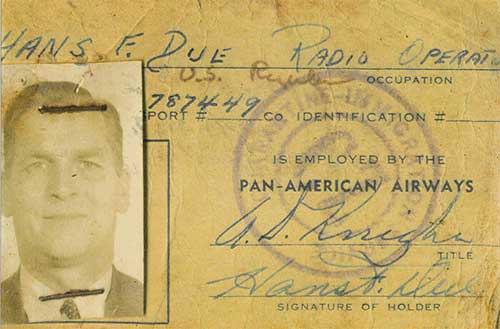 Although quiet and self-contained, Fred Due was good in your corner. He came to PAA from the United States Marine Corps, having served in the Philippines during the US’s long-running attempt to suppress a guerrilla war for liberation. Due’s Marine Corps training insured that he could operate radios in less-than-ideal situations and defend himself (and others) as he did so. Due’s crewmates, Captain Charles A. Lorber, and co-pilot/mechanic Juan Sauceda were expert aviation mechanics, and Charles Lindbergh held Lorber’s leadership skills in high regard, having selected Lorber as his co-pilot for several PAA Caribbean route-opening flights. Shattuck wanted Due to keep his two crewmates safe while they cared for the aircraft and its passengers.

Fred Due left Rio April 10, 1931 with his colleagues on the four-day, 1,500-mile flight to the expedition’s basecamp at Descalvados on the Upper Paraguay River. Reflecting the PAA system-wide standard for safety and technical innovation, the team carried PAA’s most recent radio-telegraph equipment, along with Shattuck’s hand-selected assortment of spare parts and tools. And, in proper PAA operational form, James Shattuck provided Due a two-page, single-spaced list of every item assigned to his care, and copied to PAA Chief Communication Engineer , Hugo Leuteritz in New York City. (Interestingly, Shattuck omitted the arsenal that the PAA crew carried with them into Brazil’s wilderness from this detailed list.) The total weight of all this equipment, including reams of PAA forms that Due was expected to maintain, came in at just under 185 pounds. 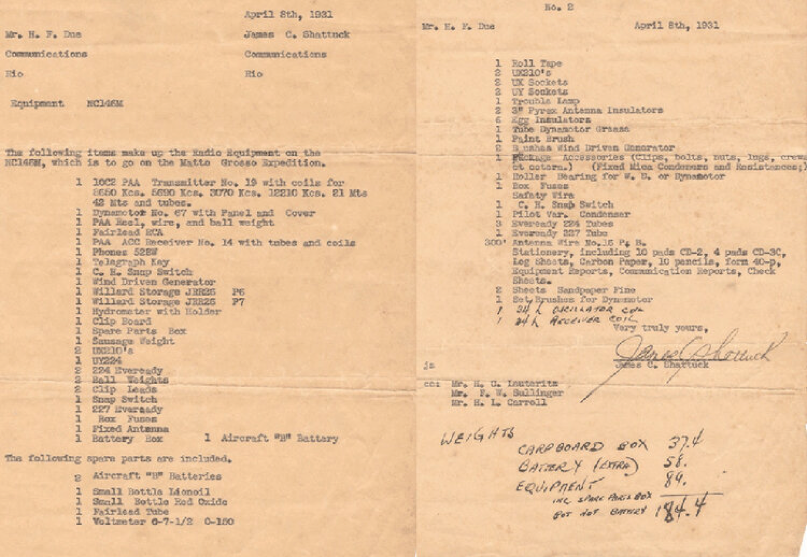 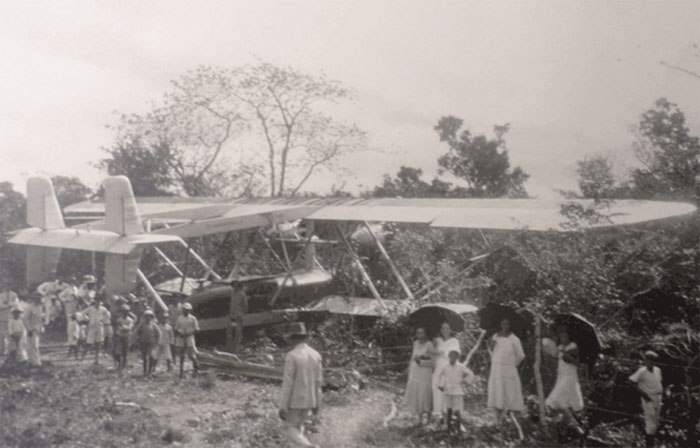 Not able to notify Rio about the accident using the aircraft’s standard antenna, Due unreeled all 300 feet of the spare antenna and had a village boy carry it to the top of a towering tree. With contact established, the team spent two days patching torn wing fabric and the punctured hull, before returning to Rio for three-days of round-the-clock repair work. 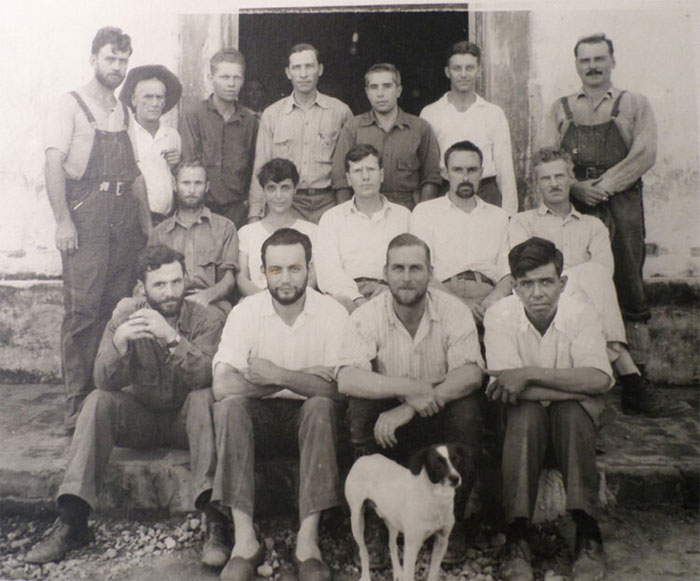 After a short leave, in late 1931, Hans Due moved to PAA’s Caribbean Division and resumed more-normal PAA activity. In addition to staffing flights throughout PAA’s Caribbean routes in the mid-30s, Due did a multi-year tour as PAA Airport Manager at Nuevitas, Cuba. Following WWII, Hans Due and his family lived in Massapequa, Long Island, New York for three years while he flew PAA’s transatlantic routes. In addition to the Consolidated Commodore and Sikorsky S-38s of his early PAA years, Fred served aboard Sikorsky S-42s, Boeing 314s, Douglas DC-3s and DC-4s, and Lockheed Constellations.

Hans Due’s PAA career ended abruptly after more than twenty-years of service when new aircraft designs with electronic navigation systems made radio operators/navigators obsolete. In 1950, Due returned to Miami with his wife, Aimee and four children, where, according to his son, Hans, Jr. he inspected cars for the Miami Police Department, played cards (bridge with Aimee and poker with guys) and communicated with radio enthusiasts around the globe, until his death December 3, 1980. 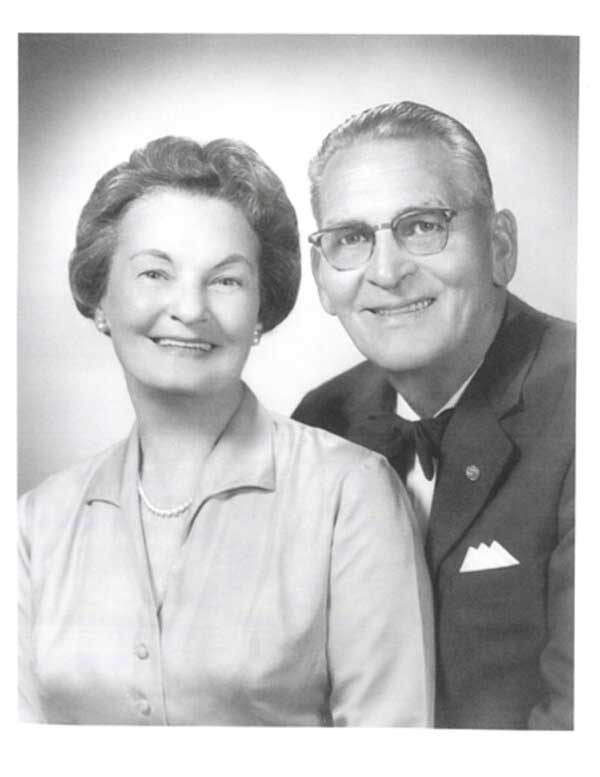 Hans and Aimee Due, circa 1960 (Courtesy Due Family Collection).

Read more about Hans Due in Penn Museum’s magazine, “Expedition” in another article by Eric Hobson entitled “Brazil From Above”. https://www.penn.museum/sites/expedition/brazil-from-above/