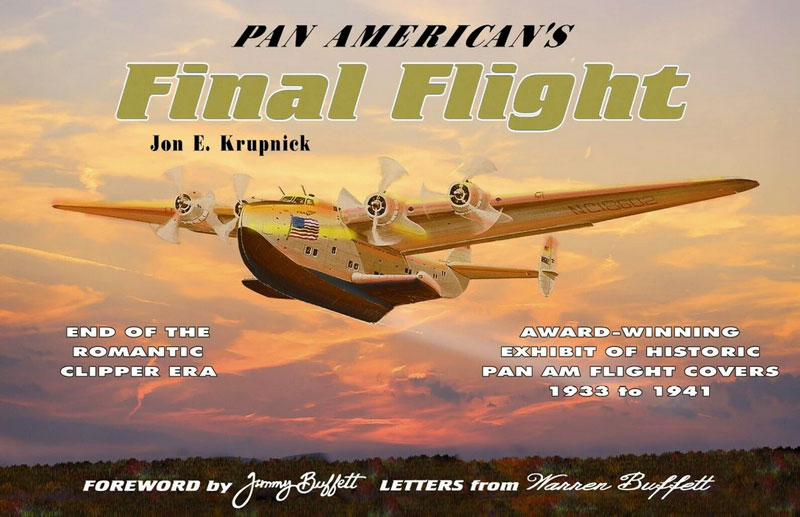 Spurred on by his inveterate exploration of the aerophilately of the magnificent history of Pan American’s conquest of the Pacific, Jon Krupnick has now produced a wondrously illustrated offering of the best of his collection in “Final Flight.” Even if you haven’t explored the world of flight covers before, you will be drawn in by this beautifully produced gem of a book. Here, we've republished two reviews recently written by John H. Hill and Peter Leslie.

Available for purchase at https://panamclippers.com/

Reviewed by John H. Hill, Former Assistant Director, Curator-in-Charge of Aviation, SFO Museum & Coauthor of  "Pan Am At War". John Hill currently serves on the Board of the Pan Am Historical Foundation.

Jon E. Krupnick’s new book, Pan American’s Final Flight, is what museums call an exhibition catalogue—and it is a first-rate one at that. This visually stunning and deeply researched work is a printed version of the author’s award-winning collection of airmail “flight covers,” which he has exhibited at stamp shows over the years. It masterfully caps off his two previous publications, Pan American’s Pacific Pioneers: A Pictorial History of Pan Am’s Pacific First Flights 1935–1946 (1997) and Pan American’s Pacific Pioneers: The Rest of the Story (2000).

Those two profusely illustrated volumes comprised a definitive operating history of the famed Pan American Airways—before “World” was added to its name—and the airline’s singular development of ocean air transport with its commercial routes to and through the Pacific Region beginning in 1935. The earlier works centered on airmail but also included other documents and illustrations of historic three-dimensional artifacts, all from the author’s personal collection as well.

This new book, however, focuses exclusively on the airmail history and thus provides a wonderfully expansive view of the subject. The pictorial presentation and contextual research in Pan American’s Final Flight are so compelling that it transcends stamp collecting circles with great appeal to a broad spectrum of interests and readers. Mr. Krupnick has exalted these exquisite aerophilatelic specimens and the history they radiate to new heights of understanding and appreciation.

Today, it is easy to lose sight of the important role airmail played in the formative years of the airline industry. Mail flew first in the period between the wars. An inaugural scheduled flight was almost always limited to just airmail. Passenger service followed on perhaps the next scheduled flight, if tickets could be sold. Domestic and foreign airmail contracts were essential sources of revenue for the fledgling industry. Exploratory survey flights occasionally carried small loads of mail as well.

Mail service continued with regular passenger service, but the mail carried on the very first scheduled flights, and other first-passenger or combined first-passenger and mail flights, was handled in a special manner. The envelopes, called covers, were adorned with unique features including elaborate art and commemorative rubber stamp imprints called cachets identifying the route and memorializing the date. The postage stamps, often specially issued by the country of origin, added more color and many covers were further enlivened by flight crew signatures. The post office time stamp and cancellation marks added to the all-over look of a “first flight cover.”

With multiple stops needed due to the limited range of the famous “Clipper” flying boats first used by Pan Am for long over-water routes, each segment of each route—outbound and inbound—could have its own variety of such enhancements for each piece of mail. The first trans-Pacific route, for example, had five stops at island bases between San Francisco and Hong Kong producing a multitude of flight covers for all the variations of mail drops along the line. Instantly collectible as prized keepsakes, these flight covers are tangible pieces of history from the pioneering days of air travel.

Documenting the dates and places for commercial aviation’s development point by point across oceans and continents, they speak to us of the days when the airplane emerged as a powerful new means of global communication between once distant lands.

By generously sharing his collection and insights Jon E. Krupnick has brought this fantastic history back to life for all to enjoy in Pan American’s Final Flight. 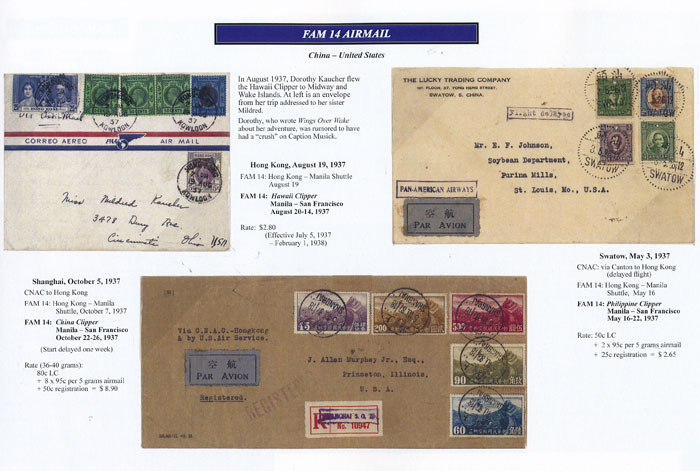 Reviewed by Peter Leslie, first published in the Clipper Newsletter, Summer/Fall 2021. Author of "Aviation's Quiet Pioneer: John Leslie and Pan American's Flying Boats", Peter Leslie currently serves on the Board of the Pan Am Historical Foundation.

I opened the envelope containing Jon Krupnick’ s new book on Pan American’s storied history of transpacific flights in the 1930’s. I thought, “What more can he say?” His first two books told powerfully the story of Pan Am’s pioneering flights across the Pacific starting in 1933. He used photos, letters, newspaper articles and, occasionally, a first flight cover of a pioneering flight.

This time he tells the story through his gold medal award winning collection of first day covers carried on Pan Am’s inaugural flights across the Pacific.

A first day cover is a term philatelists use for an envelope that was mailed on the first day a new stamp is issued, or, in this case a new route or new form of transport is initiated. One example is the first day of the flight between two points. What sets that envelope apart from another? As there was just one headline pioneering flight to that destination there would never be another first day cover for that route or mode of transportation. Mail between those two points would become routine.

Often there is a famous story behind those first flights. The flight had been headline news. Sometimes a poignant story, or for any number of reasons. For example, as I slid Jon Krupnick’s book out the envelope I saw the back cover first. My eye fell on the envelope in the upper right and the words “MISSING IN ACTION” leaped out at me. The envelope was addressed to Miss Helen Snyder in New York.

Another rubber stamp had a pointed finger “Return to Sender.” The letter was from Ensign Belmont Williams, Wake Island. Many of us recall that Wake fell shortly after Pearl Harbor.

“What happened after that?” I wondered. I thought how almost cruel it was to inform a young lady that her boyfriend or fiancé might have been killed in combat or captured by the enemy.

Each cover tells a story, sometimes happy sometimes sad, sometimes of failure, sometimes routine, and other times a triumph of engineering and piloting. Jon Krupnick’s book explains the story behind many of these covers. Perhaps there is no better example of the thoroughness and expertise that Jon Krupnick brings to the tales and exploits of Pan Am crews on those initial flights and Pacific bases than

this one stamp. Jon traces the names of Miss Snyder and Ensign Williams and finds he did survive captivity and returned in 1945. They were married for 41 years.

Although this book focuses on the Gold Medal collection which won the highest award in the contest among collectors, any of us can sit down and turn the pages and feel a strong connection to the story of Pan Am’s pioneering trans-oceanic flights in the 1930s. The photos and images in this book are done so well that the reader can imagine he or she is holding the original envelope.

I am not a stamp collector, but I know the story well because my father was Pan Am’s Division Engineer in the Pacific during the period of the first Pacific crossings. He would have loved this book and I am confident a fan of Pan Am history will have trouble putting it down.

Available for purchase at https://panamclippers.com/ 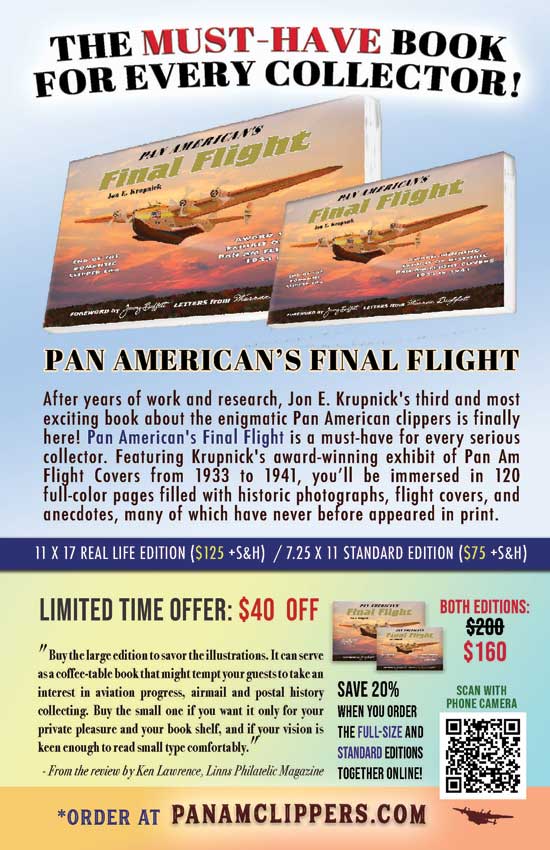