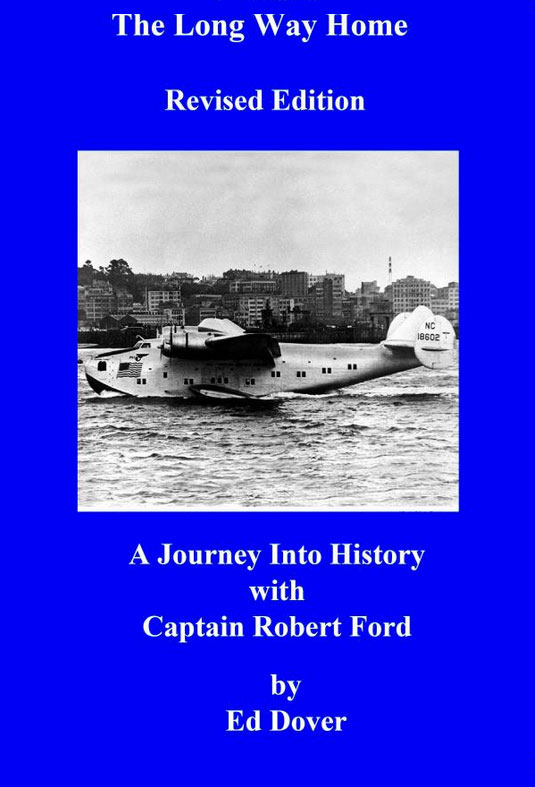 Excerpt from the book

Few people today can speak with the authority that Ed Dover brings to the history of Pan Am’s flying boat days. His book, The Long Way Home, has proved a real favorite among those who want to take a deep dive into the subject. We’re very pleased to have Ed’s permission to share an excerpt from the book — Chapter XIV — on our website:

Excerpt from Chapter XIV of "The Long Way Home Revised Edition - A Journey Into History With Captain Robert Ford”.

"Captain Ford and his crew are about to embark on the longest leg of the journey - across the South Atlantic 3,100 miles from Leopoldville, Belgian Congo to Natal, Brazil.

It was midday before all the fuel was loaded. The crew had come on board earlier and now most of them were eager to get going. The stifling heat and humidity made the flight deck feel like a Turkish bath; and the sooner they could get to altitude with cooler air circulating through the cabin, the better they would like it. But before they could go, Ford had to consider one other factor that would affect the takeoff.

When they had landed the day before, he had noted the strong current running in the Congo. The downstream flow was about six knots. The light breeze was blowing downstream also, at about four knots. He could elect to take off upstream, against the wind, but while that would give him the four-knot airspeed advantage of the wind, it would also create a six-knot drag from the current. This could pose a problem when it came time to haul the big flying boat off the water. If he took off downstream, he would lose the four-knot airspeed advantage, but pick up a six-knot push from the current that could help get the hull out of the water. After considering the alternatives, Ford made his decision.

"Okay, Johnny," he turned to John Mack, "we taxi upstream as far as the next bend in the river. Then we take off down stream. With this heat, I'm thinking we'd get better advantage from the six-knot current than from the four-knot headwind."

"Downstream it is, then," Mack agreed.

The temperature was hovering around the 100-degree mark. Everyone was wringing wet with sweat as they took their places on the flight deck. With all engines started and bow lines cast off, Ford shoved the throttles forward, swung around and headed upstream. When they reached the first bend, he swung around again. Immediately he could feel the current carrying them downstream.

The engines roared. The Number One engine, still without its exhaust stack, added the trip-hammer beat of its unmuffled power to the swelling sound. NC18602 surged forward, aided by the six-knot current. Bob Ford concentrated his gaze far ahead, down river to the start of the Congo Gorges, the series of cataracts, rapids, and waterfalls amidst a jumbled maze of canyons and rocks, where the river began a steeper descent toward the sea. They would have to be airborne well before reaching that drop-off point. If not.... Ford preferred not to think about it.

With his left hand pressing the throttles hard against the full power stops, his right hand grasping the yoke, and his eyes concentrating on the river ahead, he mentally measured the rapidly decreasing distance to the gorge. Below, in the main cabin, 2nd Engineer John Parrish watched as the spray whipped over the sea wing. He was aware that the aircraft was well over normal gross weight, and mentally counted the seconds toward what he knew was the maximum allowable time for a full-power takeoff: ninety seconds. Twenty seconds went by. Thirty seconds. Still no liftoff. The spray continued to fly past his window. The surface of the river was just as close as ever. Hell! he thought, get this mother up on the step! With every passing second he had visions of the big ship running off the edge of the gorge, smashing into the rocks. He wondered how big an explosion 5,100 gallons of 100-octane fuel would make. Subconsciously he cinched his seat belt tighter and stiffened his body against what he thought might be the final moments of his life.

Bob Ford glanced quickly at the airspeed indicator. Seventy knots - the design-rated landing/stall speed. As the airspeed needle crept above that mark he gently brought the wheel back. The Clipper's bow rose above the horizon but it did not break off the water. He let the wheel forward again. With the bow down he could see the edge of the gorge 1,700 yards away. More speed, he needed more speed to break the suction. He kept the nose down, hoping to build up the airspeed. Fifty seconds now. Sixty. Seventy. Then he decided. If we don't break off in another twenty seconds I'll pull back three engines but keep Number One at full power. Its torque will swing us around and we can head upstream. All eyes on the flight deck were fixed on the rapidly approaching gorge. No one uttered a word. Ford adjusted his grip on the throttles. He flexed his left hand. At that moment NC18602 came off the water. But the reprieve was only momentary. They barely had flying speed and were not climbing at all, just hovering a few feet off the surface and still headed toward the gorge.

"Ninety one seconds" Swede Rothe called from the engineer's station. "That's past max time for full power. Can we pull it back now?"

"No way! Keep those throttles to the stops. We're not out of this yet!"

"Okay, but the cylinder head temps are over redline! We could blow at any time!"

Ford did not reply, but thought to himself: Hell! We'll either blow up or hit those rocks. Either way we're dead. Might as well die trying. And he kept his hand hard against the throttles. Gingerly he tested the yoke, attempting to find a balance between pulling back too far and risking a stall and maintaining just enough nose-down attitude to build up the airspeed without settling back onto the river.

At that moment they passed the rim of the gorge. The river dropped away into the rocky defile and the water turned to white foam as it crashed against the boulder-strewn bottom. Without the cushioning effect - the so-called "ground effect" - of being only a few feet above the water surface, NC18602 also began to descend into the gorge. In seconds they were flying within the confines of a narrow canyon, still not too far above the surface. But the extra separation from the water surface did allow Ford to drop the bow a little more and gradually the airspeed began to pick up.

Okay, Ford thought, that gives us about five knots to play with to get some climb out of this baby. Gently he exerted enough back pressure on the yoke to raise the nose and drop the airspeed to eighty knots.

"We're not out of the woods yet, Johnny," Ford cautioned. "Look up ahead, there."

Directly ahead the gorge took a curve to the right. They were still below the edge of the precipice and the rocky ledge loomed before them. "There seems to be room to take a shallow turn and follow the canyon."

"Yeah, as long as we don't bank too far. We're still marginal for a stall."

Ford watched the approaching curve in the gorge and mentally gauged the point at which to begin a gentle turn. As they reached that point he gently applied pressure to the wheel, turning it to the right, while at the same time feeding in a light pressure on the right rudder pedal. The wheel would not move. He increased pressure. The yoke would not budge. He could move it forward and back, but he could not get it to turn. With no aileron movement and the slight amount of right rudder, the ship skidded left.

"Now what the hell is wrong?" he exclaimed. "Hey, Swede, we've got no aileron control. The damn wheel won't budge! What gives?"

Swede Rothe made a quick assessment: "The aileron cables must be jammed. Hang on! I'll check it out." He rose from his seat and went to the starboard hatch leading into the wing. He opened it, peered into the tunnel, and saw the problem immediately. Looking out along the catwalk tunnel he could see that it had a tilt to it, only slight, but noticeable to his trained eye. Then he turned his attention to the aileron cable running through the channels in the wing. At a point where the cable went through a pulley, it was clamped tightly between the groove of the pulley wheel and the pulley housing. Quickly he returned to his station.

"Skipper, the aileron cables are jammed in their pulleys because the wing is flexing. We're going to have to get up into cooler air before those pulleys will free up."

As Ford digested this news from Rothe he was, at the same time, trying to improvise some way to make the big ship follow the twists and turns of the gorge. After some experimentation he found he could use the rudder by itself to skid around the turns. Each time he applied right rudder, the ship would skid left and the right wing would dip down. Conversely, it worked the same when he attempted left rudder. In this way they continued; airspeed just above stall, gaining about fifty feet per minute, following the curves of the gorge.

Slowly the flying boat was able to gain enough height to put them above the surrounding terrain. Ford was eventually able to let up enough on the yoke to build up a little more airspeed. Finally they had a safe altitude and Ford called to Rothe to throttle back to normal cruise climb. The four engines had been held at full power for a full three minutes, far longer than the engineers at Wright had ever designed them for.

"By God, I don't want to try that again any time soon!" Rothe exclaimed to no one in particular.

As the tension eased and NC18602 approached its normal cruising altitude, Ford relaxed a little. But he listened carefully to the engines. Except for the hammering of Number One, they all sounded good. Well, he thought, I guess they're none the worse for wear. But that was too close!

Satisfied that the engines had not suffered any damage from the extended time at full power, Ford called to Rod Brown for a compass-heading to Natal. When the customary small slip of paper with the heading written on it was taped to the brow of the instrument panel, he turned the Clipper westward, heading toward the South Atlantic and what he hoped would be the final episode in this strange odyssey. "

-End of Excerpt by Ed Dover

Buy the Book on Amazon: