Pan Am and Vietnam 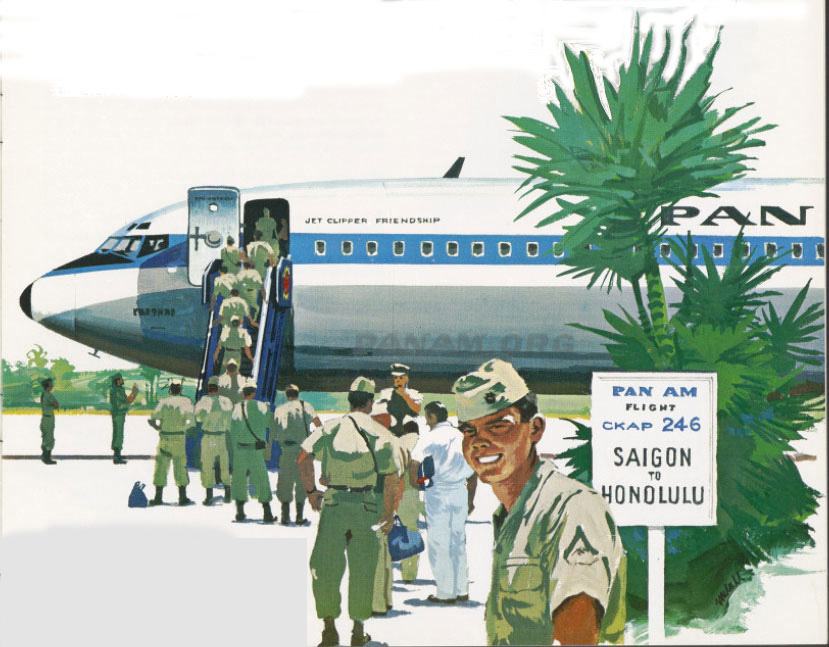 A small sampling of what you might have heard on Armed Forces Radio Vietnam (AFVN), with the voices of DJs Gary Gears, Pat Sajak, and Scott Manning. Audio was provided courtesy of the AFRTS ARCHIVE  an outstanding source and a fascinating slice of America’s history. http://afrtsarchive.blogspot.com/search/label/AFVN 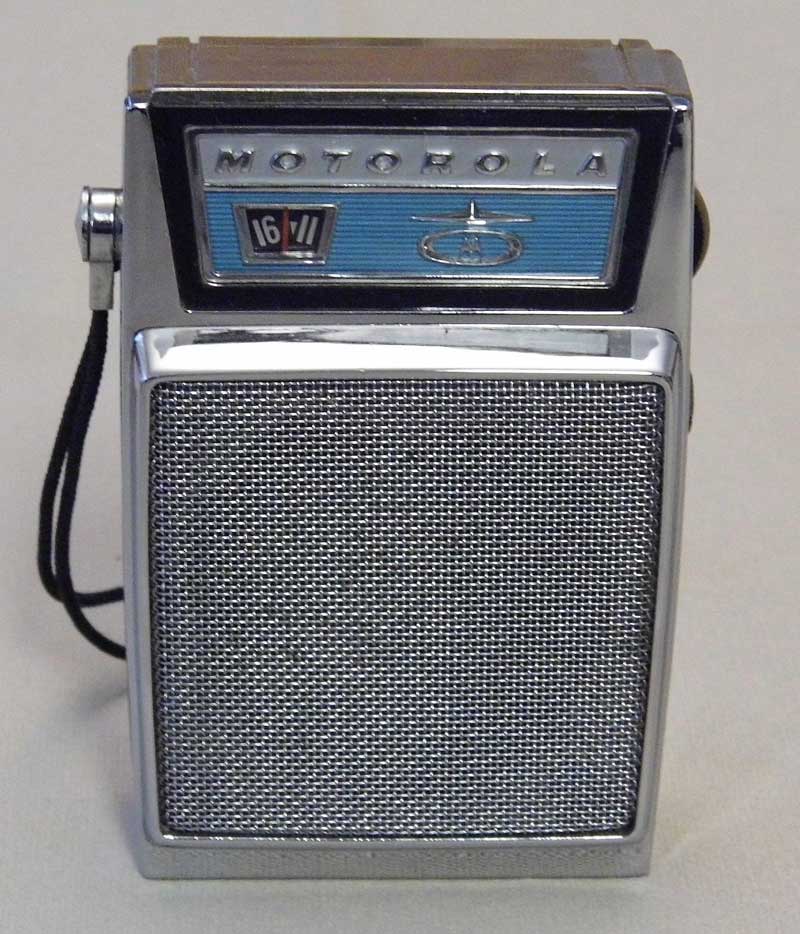 Pan Am’s service to Vietnam had begun in May of 1953. By 1970, there were five regularly scheduled flights per week from the U.S. (which also served intermediary stops across the Pacific, including Honolulu). Saigon was also a stop on Pan Am’s eastbound round-the-world service. 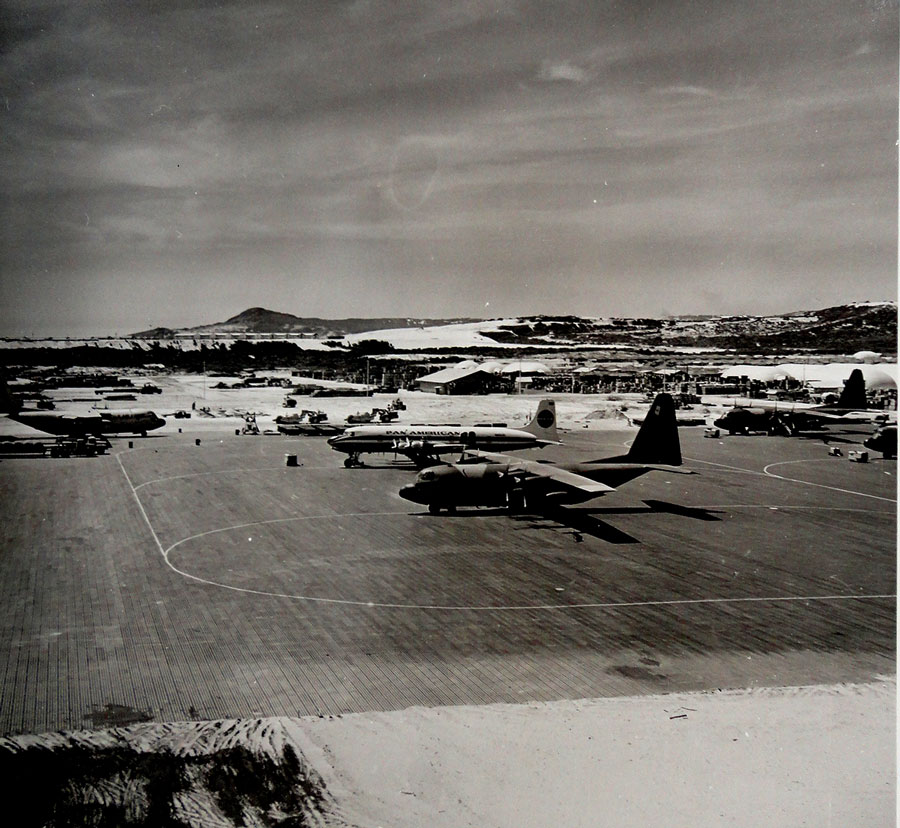 American involvement in the war in Vietnam had begun years earlier, but the first major commitment came in 1965, when President Lyndon Johnson was authorized by Congress following the “Gulf of Tonkin” Resolution to send the first U.S. ground combat troops to fight, which he did. 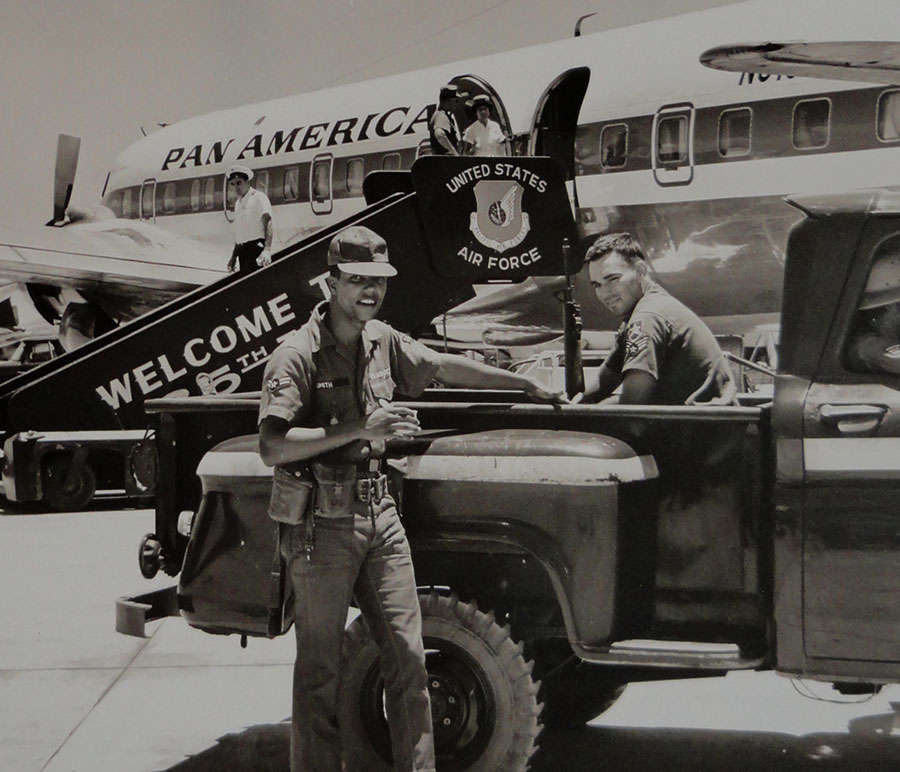 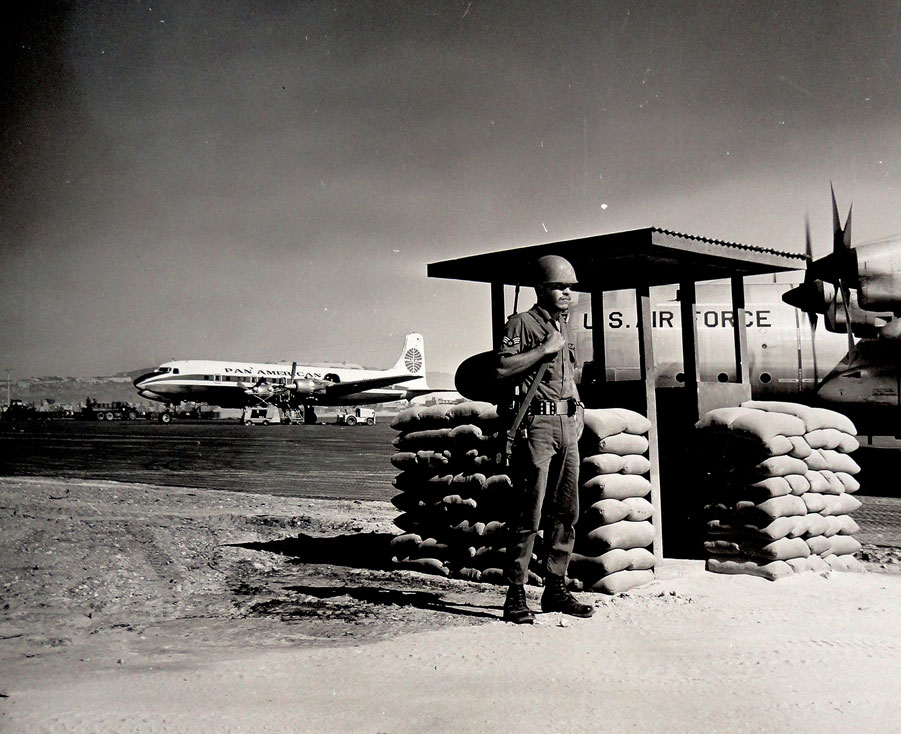 U.S. military operations expanded to a region-wide basis beyond South Vietnam, involving every branch of the armed services.  What had been a “brush fire war” at the start of the decade grew into a full-scale international conflict. 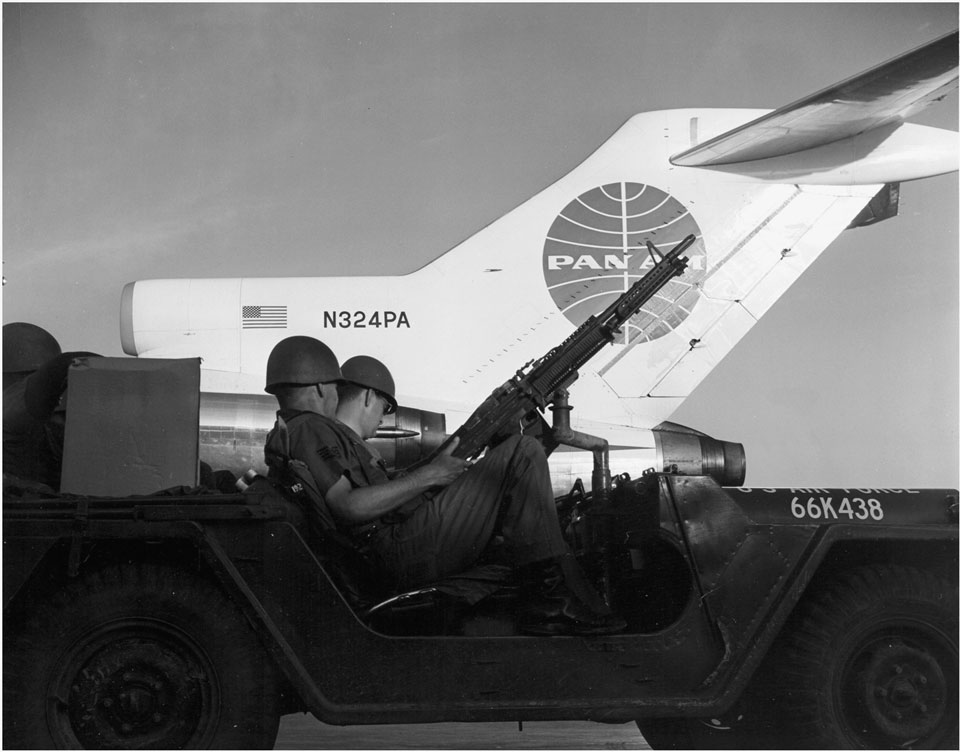 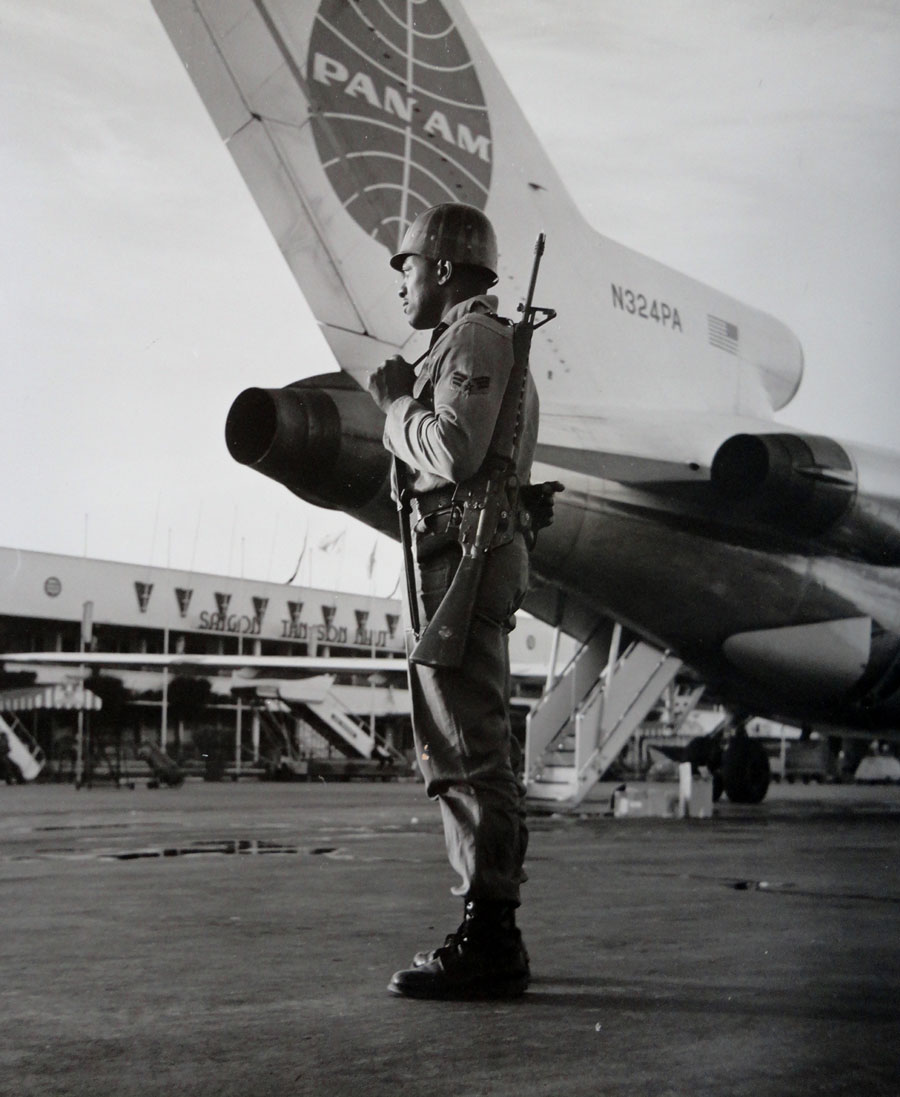 Pan American served as America’s premier international air carrier and if there were Americans and American interests in foreign countries, it was likely that Pan Am would be there too. Vietnam was no different. But things were far from normal as regards Pan Am and Vietnam by the time the Vietnam War started to mushroom. “The Pan Am Clipper’s takeoff angle, like its landing approach, is remarkably steep, ever since a .30 caliber bullet from a suburban sniper’s rifle clipped an oil line on an engine of a landing aircraft.” (“Classroom Clipper Magazine” April – May 1966, Courtesy University of Miami Special Collections) As in past wars, Pan American World Airways was ready to offer services in support of the U.S. government’s policy objectives. Juan Trippe had always been an adherent of the philosophy that ‘America’s domestic quarrels should end at the water’s edge,’ and Pan Am was soon part of the logistics operations supporting U.S. involvement in Vietnam. By 1966, Pan Am could report that it was providing about 40 flights per week to and from Vietnam from the U.S. carrying military personnel and cargo. It was not, by any means, the only U.S. airline to receive government contracts to manage war-related airlift work. Both scheduled and non-scheduled U.S. airlines received government contracts to manage the increasing burden of logistical support across the Pacific. It was a very similar scenario to what had happened during the Korean conflict, fifteen years earlier.

A small sampling of what you might have heard on Armed Forces Radio Vietnam (AFVN), with the voices of DJs Gary Gears, Pat Sajak, and Scott Manning. Audio was provided courtesy of the AFRTS ARCHIVE  an outstanding source and a fascinating slice of America’s history. http://afrtsarchive.blogspot.com/search/label/AFVN

But during the Vietnam War Pan Am did something special too. On February 2nd, 1966, Pan Am’s president Harold Gray asked the U.S. Military Airlift Command (MAC) if they would accept an offer from the airline to provide R&R flights (rest and recuperation/rehabilitation/relaxation – as the acronym has been variously interpreted) flights to troops serving in the war.  Two days later, after a quick thumbs-up from the government, Pan Am Capt. Thomas Flanagan was given the nod to get the operation going. On February 25th, Flanagan led a contingent of volunteers in a flight of two DC-6B’s (requisitioned from Pan Am’s Internal German Service) to Kai Tak Airport at Hong Kong. The mission: Organize and rush the new service into operation.

On March 1st, a scant four days later, the R&R flights began. The initial operational profile was to provide 1,800 monthly passenger round-trips from South Vietnam to Hong Kong, with an additional 1,200 round-trips to Tokyo. The R&R flights grew quickly, along with the burgeoning military commitment to the war. By the end of that first year, a company press release noted that the flights had already carried 100,000 passengers to brief several-day rotations to 8 different resort destinations, which by August included Hawaii. Pan Am was the only airline providing this service.

By the next year, the service had grown to about 18 flights a day. Pan Am’s commitment had ballooned from the original two DC-6B’s to over a dozen other piston-powered aircraft as well as two Boeing 707 jets. There were, the press release reported, 35 six-person (all volunteer) crews based in Hong Kong, along with another 100 personnel based in various R&R network points, including Da Nang, Saigon, and Cam Ranh Bay in Vietnam. 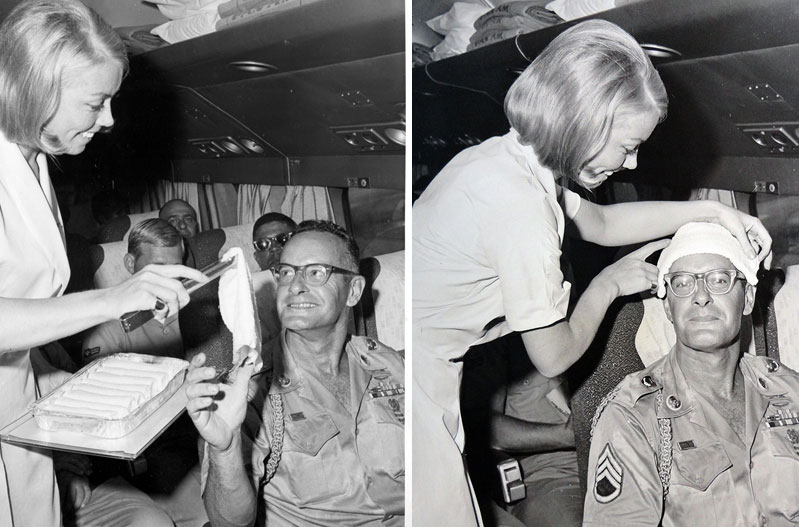 The flights were all-first-class affairs. The usual meal served was steak, home fries, green beans, milk, and ice cream. It was reported that this provisioning added up to a monthly total served of nine tons of filet mignon, 9,000 quarts of milk and five tons of ice cream.

Pan Am wasn’t averse to having the R&R flights seen as a patriotic service. The airline made known that the entire first four months’ cost was billed to Uncle Sam for a total of $1 per month. The real cost (as reported by Pan Am) was actually more like $2,8 million. After the initial period, a new contract was signed, providing the airline remuneration for actual costs incurred, but no profit.

The R&R flights were absolutely appreciated by those they served. Richard Upchurch, an airman who served during the Vietnam War, wrote in "Vietnam Reminiscences" :
“I was on one of those flights, mid 1968, to Yokota/Tokyo, for my 7 day R&R... I always wanted to thank Pan Am and all the Crews and Flight Attendants for a wonderful slice of the States, for a short time anyhow.  I watched many flights take off and land at Da Nang AFB where I was stationed and always thought about the Crews and Flight Attendants, willingness to risk their lives just so we could get out of the War Zone for just a little while and feel good, relax and not scared for that short time we had.  I made it home after my tour, but some, even after those R&R flights, did not make it out alive.”

Meanwhile, as the Vietnam War heated up, and casualties mounted, there was a growing backlash among many Americans about the moral and political basis for the country’s involvement. As tensions mounted, there was plenty of critical focus on any and all institutions seen as supporting America’s continuing war effort. This criticism extended to Pan Am. 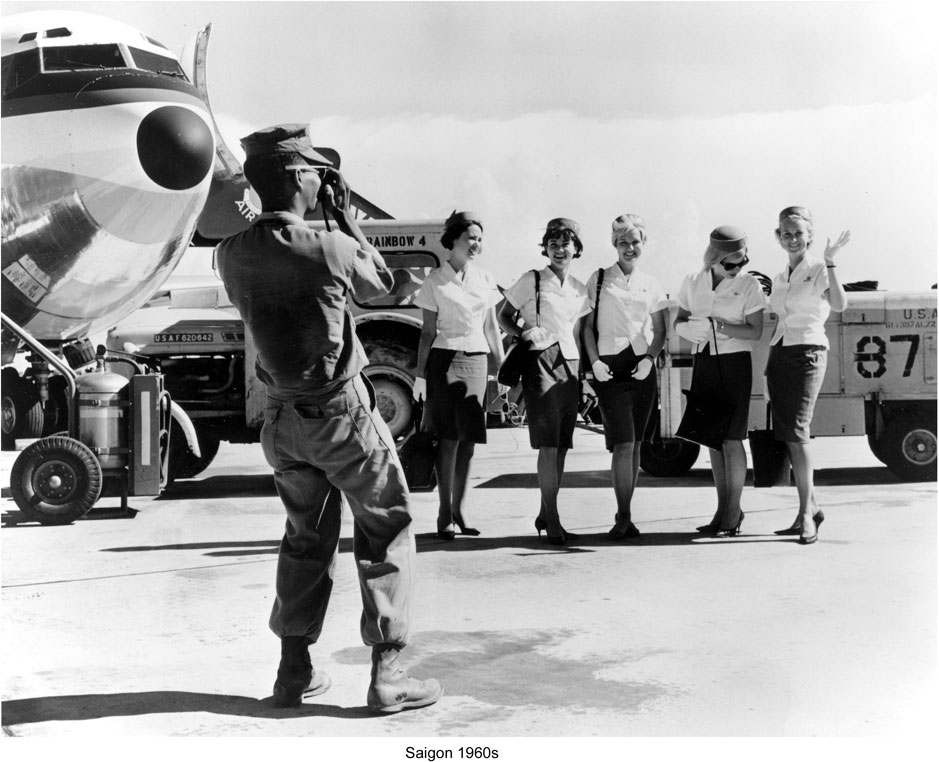 Pan Am did receive a goodly share of the Military Airlift Command’s budget for U.S. government contract work to and from Vietnam. In FY 1968, for example, the airline was awarded contracts for 17% of the almost half-billion dollar total – more than any other of the 21 air transport companies receiving contracts. Flying Tigers, the only other U.S. airline flying to Vietnam under a CAB certificate for regular cargo service, received less than half of what Pan Am’s contracts provided.

But like the servicemen and women themselves who were in harm’s way, Pan Am was operating in the context of decisions being made elsewhere. The airline was quick to point out that it was not handsomely profiting by its government contracts. An officially-distributed letter from the airline in 1970 noted that “...we lost $25.9 million system-wide last year (1969). Our commercial service to Vietnam showed a loss in 1969 and contributed to the year’s adverse financial picture.” The letter pointed out that Pan Am had a very small role in troop movements between the U.S. and Vietnam, and was mainly focused on operating R&R flights, at the minimum rate set up by the CAB for military charters.  The total number of Pan Am’s all-military cargo and mail flights reported at the time were 21 flights from the U.S. to Vietnam, with 17 returning. The bottom line for the airline was this, as presented in a policy declaration: “Our response is not a political act of approval of the policy of our Government in Viet-Nam. But it is an action that Pan Am has taken at the request of the last four duly elected governments of the people of the Unites States.” It was not possible for Pan American World Airways to remove itself from America’s major international undertaking. Like it was doing to every other US institution, the war in Southeast Asia was pulling on the threads that held Americans together.

The real lasting result from Pan Am’s Vietnam operations came in the form of intangible human factors, and not only for the military passengers who found a brief respite from war during their R&R furloughs. 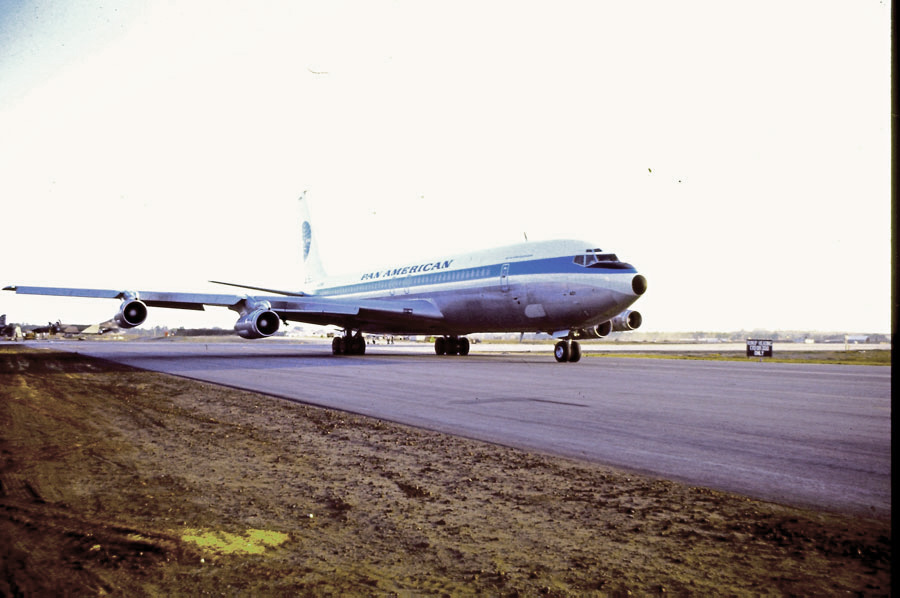 This is from an interview with Stewardess Nancy Hughes, reprinted from her hometown paper, “The Main Line Times” in Bryn Mawr, Pennsylvania.

“If you go into Vietnam as a stewardess with any sort of feeling for or against the war, you’re dead. What you see is 170 human beings on the airplane and you have to accept it as that. You can’t like or dislike it... [On]the R & R flights to Tokyo or Bangkok or Hawaii... they’ll only be away from war for five days. I try to make them relax... They have been away from a lot of the things we take for granted... One fellow told me that the first thing he was going to do when he landed in Hawaii was to rent a car, drive down to Waikiki and start a traffic jam, just so he could hear the sound of car horns. They miss the ring of the telephone, and ice cream and civilian clothes, and traffic jams and bed sheets. When I hand them a pillow on the plane, they hesitate and look at me. They’re not used to it.

But while the trip out on R & R is a happy one, there are fewer smiles on the way back from the sandy beaches of Waikiki, back to the Vietnamese jungles. But the men’s morale is always great. Also, they are always gentlemen. The war means many things to many people, but in the job I have it’s always the men I remember best. I’ll always remember these men.” (“Wingtips,” Vol. 3, Issue 1, February 1969, Courtesy University of Miami, Special Collections)