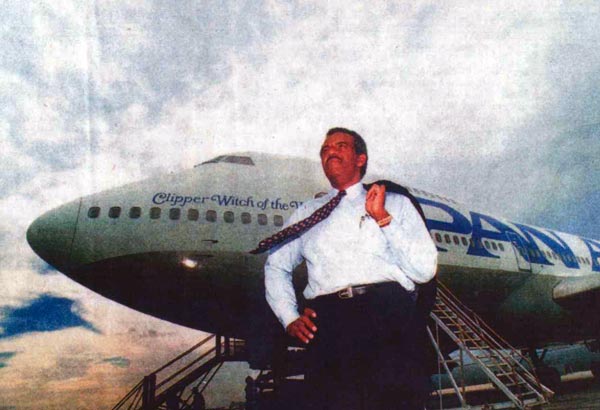 When South Vietnam ceased to be

It's four decades since the collapse of the former country of South Vietnam. Intervening years have wrought mighty changes to the world. Vietnam is one country now, and the U.S. has long since normalized relations with the former enemy. The very name of South Vietnam's former national capital city - Saigon - is a historical  footnote now. Americans can visit the country with no difficulty, and many do.

In this 21st Century context, it's difficult to grasp just what it was like at the end of the Vietnam War in April 1975. As it had been for the duration of that war, Pan Am played a part at its end. We're fortunate to have Al Topping's account, who had arrived to become Pan Am's man in Saigon in December of 1972.

(This very real story was dramatized in movie starring James Earl Jones, Last Flight Out, 1990, and Al is currently working on a book about that time, which he hopes to have published later this year.) 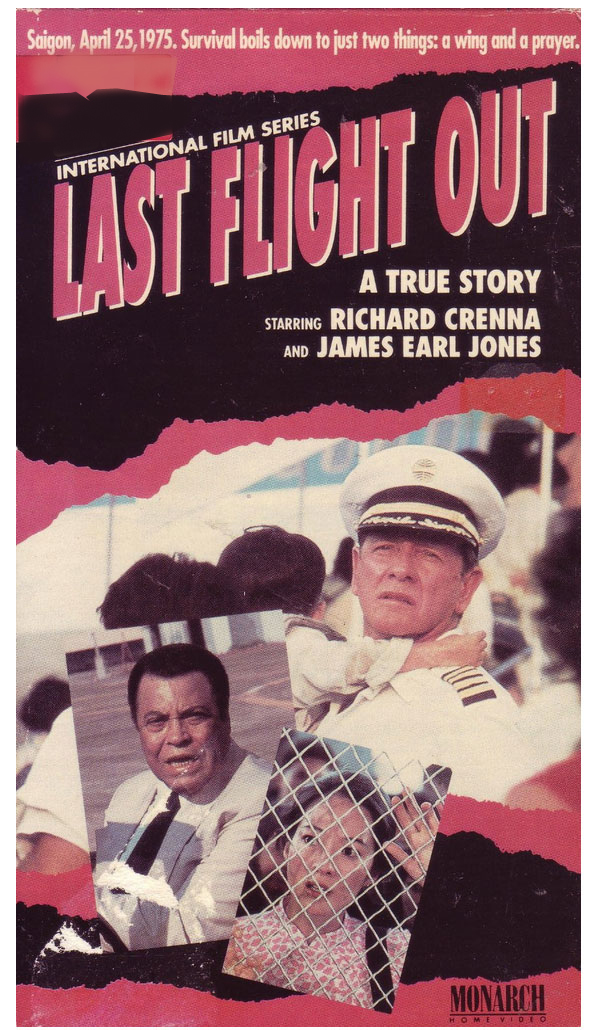 Many of the memories are still clearly branded in my mind of what took place during the final weeks, days and hours before Clipper Unity N653PA lifted off the runway at Tan Son Nhut airport in Saigon. With captain Bob Berg in command and an all-volunteer crew we headed for Clark AFB in the Philippines with 463 souls on board.

The days leading up to our final departure contained many situations of uncertainty and drama. As I watched the gradual collapse of South Vietnam I knew what was going to happen and I knew what we had to do, I just wasn’t sure how we would accomplish that mission.

I had been at Ton Son Nhut Airport that day in March when the last World Airways evacuation flight from DaNang arrived. We thought it was a miracle that the plane had made the flight at all. The Boeing 727 had been rushed by thousands of panicked (and armed) South Vietnamese soldiers desperate to flee the advancing North Vietnamese army. They had pushed their way into the plane's cabin as well as the baggage compartment, and even the wheel wells. The plane had barely made it into the air, and had been shot at and even had a grenade thrown at it as it rolled down the runway during take-off. When it arrived in Saigon, there fuel leaking from bullet holes in the wings, and blood running down the landing gear from the crushed stowaways in the wheel wells. It was impossible to put that image out of my mind as we contemplated our own imminent evacuation in those last days of April.

Our mission was clear. We would get all of our staff out before it was too late. It was at this point that Pan Am made a commitment: We would evacuate our employees and their immediate families to safety in the United States.

Under normal circumstances it could take as much as two to three months to process the documents to permit a Vietnamese citizen to leave the country. There was no time for that.

In early April when we participated in Operation Baby-Lift Pan Am operated two 747’s loaded with over 600 children headed for the US for adoption. This was the result of a very special individual, Robert Macauley the founder and CEO of AmeriCares. When Macauley saw what was taking place in South Vietnam he mortgaged his house and chartered the 747’s.

After several sleepless nights wracking my brain trying to develop a plan to get our people out, I came up with an option that might work. If we can carry hundreds of babies to the US for adoption why can’t I ask the South Vietnamese government to permit me on behalf of Pan Am, give approval for me to adopt our employees and some members of their family. Why not? Time is running out. Chaos is building. Panic is in the air. Let’s pray that we can pull it off. If this plan fails, our only option would be the plan suggested by the American Embassy . That would mean having our people assemble on designated roof tops in the city and then airlifted to US Navy ships off-shore. I was not in favor of this option. Too many things could go wrong.

I had already decided that April 24th would be our final departure. Why? Because May 1st was May Day - a holiday celebrated in some Communist countries such as Cuba and the Soviet Union. So what better time than May 1st for the North Vietnamese  to celebrate the take-over of South Vietnam.

During this critical period I could sense that some of our employees were getting concerned about my plan, or lack of a plan. They were beginning to worry about being left behind and falling into the custody of the advancing Communist troops. In looking at the map one could see that Saigon was going to be the end of a funnel. I tried to assure them to have faith and trust me.

I was stunned when our HR supervisor returned from the Ministry of The Interior with a stack of immigration documents for my signature. It worked! I signed them all and paid the fees. So now I had officially adopted our 61 employees and family members bringing the total number to over 300.

On Wednesday April 23rd I advised our employees that tomorrow would be our last flight out of Vietnam. They would have to be ready in the morning to board special buses at the downtown sales office that would take them to the airport and I would meet them at the entry check-point. That night many of them slept in the back offices downtown on the floor.

This was a moment filled with trauma. All of these employees and family leaving their country for the first, and what could be the final time, with whatever belongings could fit in a carry-on bag and heading to a country where they knew nobody and had no idea where they would live. As we lifted off the runway that day my heart was pounding. Saigon was now surrounded by Communist troops and what a target we were. A huge 747 in broad daylight in full view of troops with weapons that could take us down with just a single rocket. But as we continued our climb out and turned to the east, I could see the coastline falling away as we were now over the South China Sea. I began to breath again. Thank God - we made it.  I will be eternally grateful to the Pan Am pilots and flight attendants, who at great personal risk volunteered to operate those flights under very hostile conditions.

On the flight from Manila to Guam, Al Topping happened to sit next to LA Times report David Lamb, who quickly wrote this report on the evacuation, that was published the following day, April 25, 1975 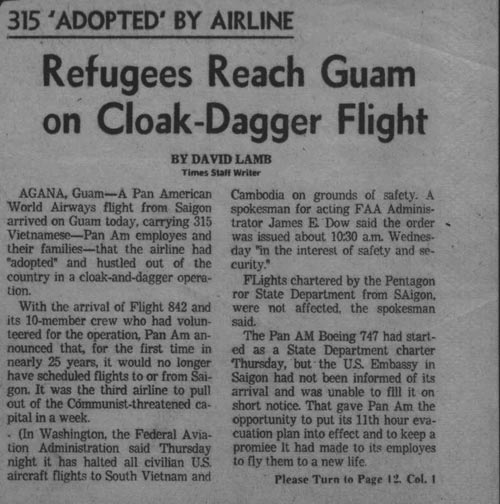 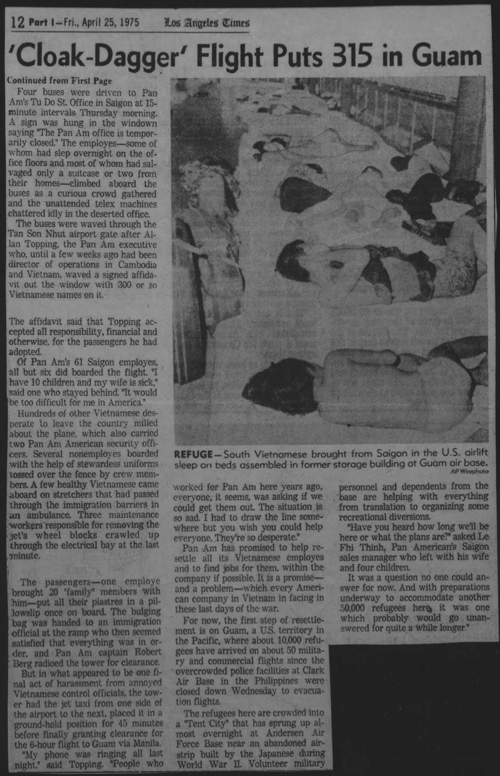 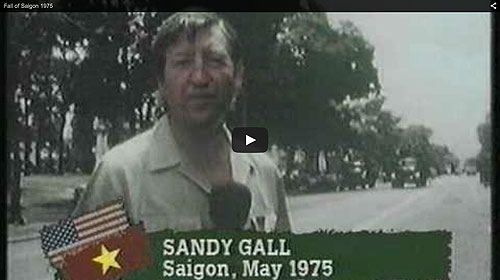 On May 1, 1975 the North Vietnamese tanks rolled into downtown Saigon and it was over. 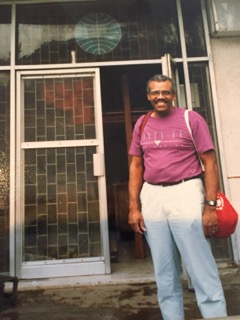 Al Topping in Vietnam, 1990, in front of downtown Saigon Pan Am office.