Never Another Pan Am

There Will Never Be Another Pan Am

Pan Am logos over the years were featured in R.E.G. Davies’ book “Pan Am: An Airline and its Aircraft. ” This book, one of many on airlines and aircraft written by Davies, was dedicated to Pan Am’s historian Althea “Gerry” Lister, whose efforts, he said, had set a standard of excellence.

Written on the occasion of Pan Am’s 75th Birthday, 2002, in the Pan Am Historical Foundation “Clipper Newsletter” by the late R.E.G. Davies, foremost aviation historian and author, who found Pan Am an endless source of inspiration and interest.

"Even today, more than a decade after the demise of this great airline, the name is still respected throughout the world of commercial aviation, sometimes almost as if it was still with us as an operating company. The reason is simple. In its time, and certainly under the generalship of Juan Trippe, it dominated the airline industry.

From the early 1930s, when it encompassed Latin America; through the later 1930s, when it conquered the oceans; during the postwar era, when it set new standards of international service; when it launched the Jet Age in 1958; and when it shook the world with the Jumbo Jet in 1970: Pan American’s leadership among its airline peers was never seriously challenged."

Until its downfall, because of some disastrous managerial decisions, it made its imprint in the annals of airline history with such emphasis that the name is indelible.

My earliest memory (as a Brit from across the Pond) was becoming aware of the China Clipper and its remarkable flight to Manila. I was still at grammar school, interested in geography, and had acquired an atlas, which innovatively showed the world’s air routes. Brought up to believe that Imperial Airways was pre-eminent in the field, it was a shock to realize that it was not the only game in town. Or the world.

After my wartime stint in the British Army, and already a civil servant, I joined the Ministry of Civil Aviation in 1946 and worked in the Long-Term Planning Department, under Sir Peter Masefield.

Pan Am set the criterion for excellence.

In trying to plan the future for postwar British air transport, the criterion of excellence always seemed to be to match whatever Pan American was doing; and better still to go the extra mile. The British came close, and Trippe even hedged his bets by ordering a transatlantic Comet 3. But this aircraft, the world’s first jet airliner, had its problems, as did the fine Bristol Britannia propjet; and Pan Am’s supremacy was never in permanent danger.

In the mid-1950s, I had moved to British European Airways, on Masefield’s staff. I can remember when, early one morning in 1955,he told us of the epochal Pan American order for 45 DouglasDC-8s and Boeing 707s. It was a shattering blow, not only to British aspirations, but to the prospects of every airline on the planet.

I once asked the president of Air France about his analysis of the need for what was then referred to as the big jets. He said
there was no analysis. When he heard of the Pan Am order, he simply told his directors to fly to Seattle and order two Boeings. “We’ll do the analysis later.” Whatever Pan Am did, its competitors had to do the same.

I went to Bristol in 1956 and to de Havilland in 1959 and we did the best we could with the Comet 4 — not too badly — but by this time Pan American ruled the skies. More than once, while in India, or Pakistan, or somewhere in east Asia, the reliable way to go home, when our business was done, and most of the airlines were delayed somewhere or other, was flight PA1 or PA2, always on time, and in those days, invariably with seats available.

By the time I was working for the Bristol Aeroplane Company, to found a pioneering market research department, I had realized the value of historical trends, and had also become fascinated with the adventure and romance of early airline development. 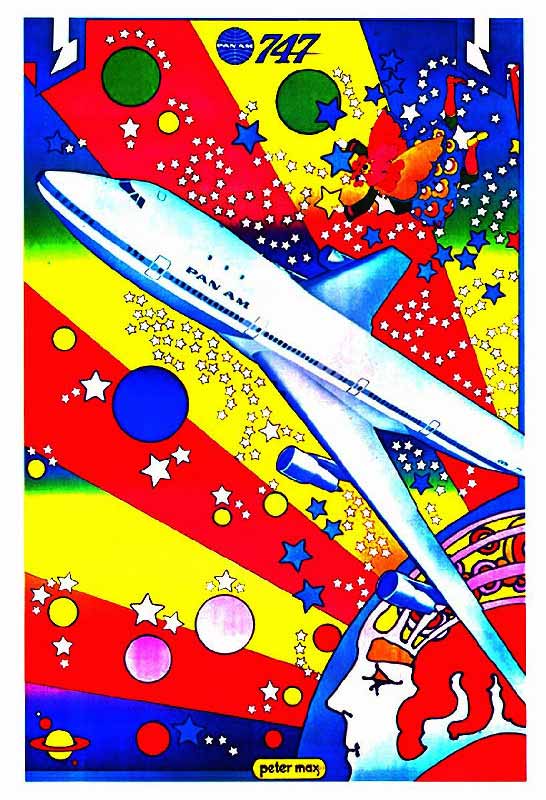 PETER MAX POSTER
This 1970 poster, by famed pop artist Peter Max, heralded Pan Am’s debut of the 747 (originally) in psychedelic colors. According to R.E.G. Davies, there have been four eras of international airliner development: Flying boats, Long-range propellers, the Jet Age, and the Jumbo Jets. Pan Am took a prominent part in all of them, and was solely responsible for three of the four.

Even at B.E.A., I had complained about the rarity of books about airline history, to the extent that my colleagues persuaded me to “stop complaining and write a book yourself.” And so, during the next eight years, I did, and in 1964, “A History of the World’s Airlines” emerged from the Oxford University Press.

During the course of my research, when I sought every possible source, published or otherwise, I was greatly assisted by the airlines themselves. Among those who helped me enormously was the late Althea “Gerry” Lister, Pan American’s official historian, who(after making sure that my intentions were honorable) welcomed me to her extensive archives. She gave me privileged access to rare documents of Pan Am’s history and folklore — but not to the famous “John Leslie files,” which, to her eternal annoyance, even Gerry could not penetrate.

The ultimate result was the inclusion in my book of the considerable wealth of material that established Pan Am’s preeminence in the world of air transport. In the almost 600 pages, it is the only airline to be accorded a chapter of its own. In subsequent books, notably Putnam’s and Paladwr’s “Airlines of the United States since 1914,” “Airlines of Latin America since 1919,” and “Airlines of Asia since 1920,” Pan Am was similarly prominent, partly because of its extensive commercial involvement in overseas airlines that it founded or became associated with.

I moved to the United States in 1968, to head up the Douglas Company’s market research department (and was notably unsuccessful in helping to persuade Pan Am to buy the DC-10 instead of the L-1011) and then went to the Smithsonian, first to take the Lindbergh Chair of Aviation History, then to stay on as the Curator of Air Transport. I continued to write books about airlines, and conceived the idea of a new style of book presentation and format.

At the time, there seemed to be two kinds of book. There was the “library” type, strictly scholarly, full of facts and figures, but with a tendency to long sections of often tedious prose, and therefore not too interesting to read, unless the reader was studying the subject industriously.

The other type was the so-called “coffee table” production, beautifully printed, invariably in splendid color, glorious pictures, but little else, except that it was a joy to look at. My idea was to combine the accurate reference material of the former with the attractiveness of the latter — the best of both worlds. 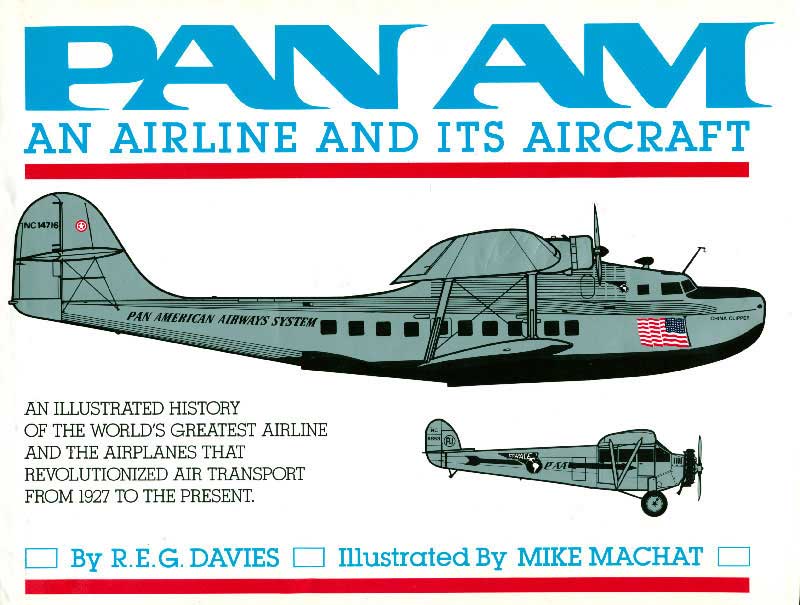 With my artist friend Mike Machat, I selected the subject for the sample that I would show the prospective publisher. I did not have to think very long.

Pan Am’s credentials were far ahead of those of any other airline. In the entire history of the world’s airlines, Pan Am alone has ever qualified as a megacarrier. During its golden years, if Pan American coughed, the rest of the world sneezed and caught cold. No other airline has ever emulated that metaphoric status, and none of today’s airlines ever will.

Eventually, I found a publisher, and thus began a series of pictorial volumes about airlines and air transport, 24 books in all, about the commercial side of aviation.

In 1995, I was approached by an ex-Pan American flight attendant with an idea, and the Paladwr Press Library series was born. Valerie Lester’s “Fasten Your Seat Belts—History and Heroism in the Pan Am Cabin” was published in 1995.

Among the titles that followed in the series were several about Pan American: “Pan Am’s First Lady, The Diary of Betty Stettinius Trippe,” “PanAfrica: Across the Sahara in 1941 with Pan Am,” by Tom Culbert and Andy Dawson ;“The Long Way Home,” (Captain Ford’s epic round-the-world flight, following the Pearl Harbor attack);“Skygods — The Fall of Pan Am,” by Robert Gandt, and “The Company We Kept," by Chief Purser Jay Koren.

Such books are a measure of Pan Am’s greatness.

Finally, in 2001, Paladwr was privileged to publish in its series of reference books, along side those of the U.S., Latin America, and Asia, Gene Banning’s monumental work, “Airlines of Pan American Since 1927." It is a measure of Pan American’s greatness that the scope of its activities required a book of such stature, ranking with those covering whole continents.

Especially during its declining years, Pan American was not perfect. But its contributions to the operational and technical advancement of the air transport industry have been incalculable.

Excluding the embryonic years of commercial aviation, before Pan American was founded, there have been four major eras of international airliner development: the flying boats, the long-range propeller types, the first jet age, and the so-called jumbo jets. Pan American took a prominent part in all of them, and was solely responsible for three of the four.

Were it alive today, and with Juan Trippe’s vision, it would have been first in line of the U.S.airlines to order the big 600-seat airliner that will be the flagship of the next generation. The initiative for the future has passed to Europe, and Europe has taken the lead with the Airbus 380. If only Boeing had had the old Pan Am to twist its arm ...

As an historian, writer, and publisher, I have been privileged to be associated with a great airline. I hope that my own books, and those by other authors that I have published, will serve to preserve the memory of the company that, more than any other, set the standards of excellence to which its contemporaries had to aspire, and from which the present-day airlines should learn."  --R.E.G. Davies

Read more about the life of Ron Davies