The Very First Passenger Flight Over the Atlantic 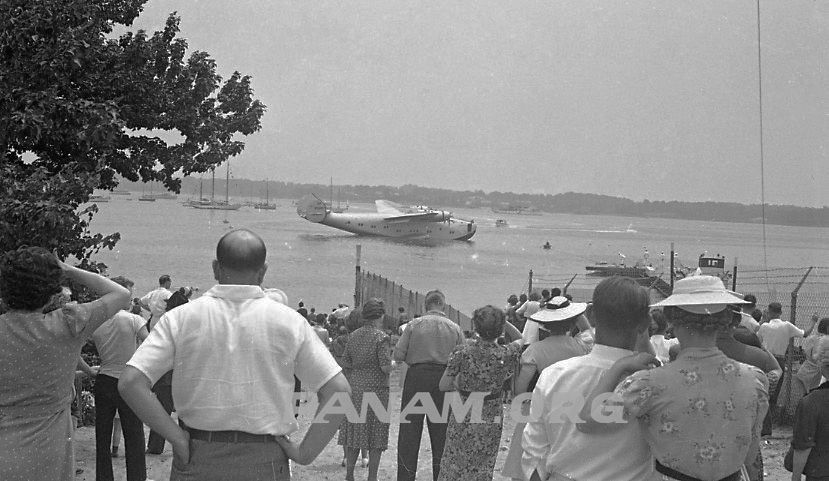 June 28th, 1939 was a big day, not just for Pan American, but for commercial aviation. After years of on-again, off-again negotiations, public prognostication, and the long-promised prospect of a new epoch for global travel, the first flight with paying passengers took off to cross the Atlantic.

The big new Boeing B-314, NC 18605 Dixie Clipper left Port Washington on Long Island, bound for Lisbon and Marseilles by way of Horta, the Azores – via the so-called transatlantic “southern route.” Onboard were 22 paying passengers. Some had paid for the privilege years earlier. 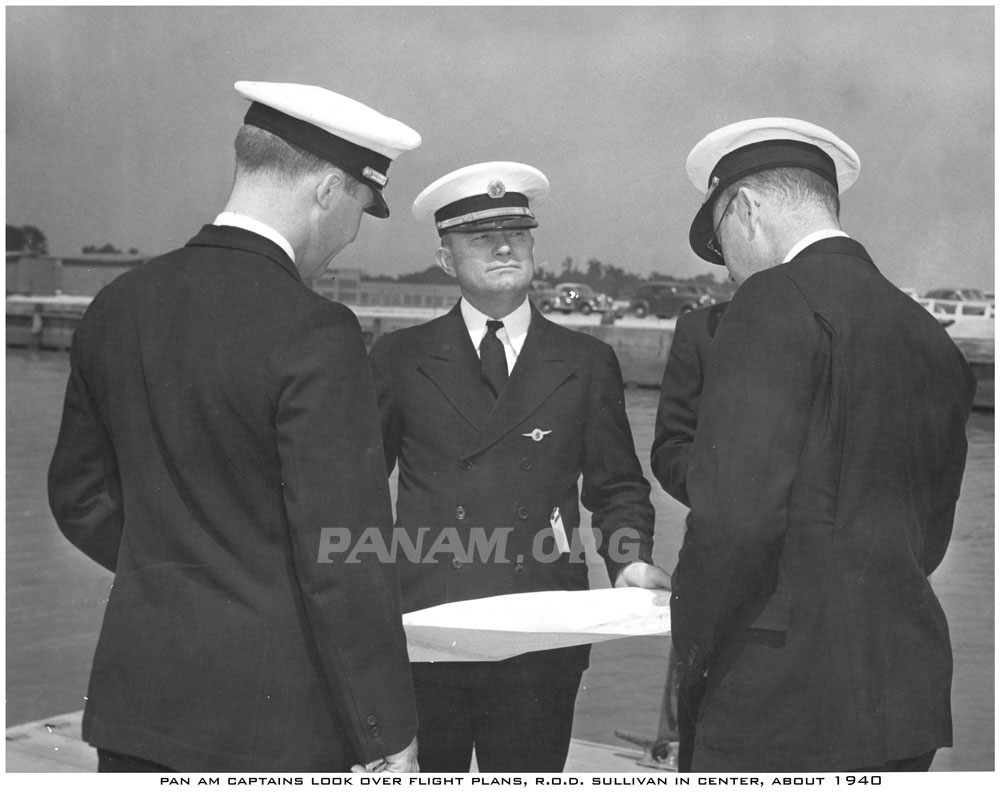 The trip was the culmination of a burst of activity over the previous five weeks, which had seen the dispatch of five airmail-only proving flights. The Civil Aeronautics Authority (CAA – forerunner of today’s FAA) had required these proving flights as part of the process inherent with their “Certificate of Convenience and Necessity” to Pan Am allowing the start of transatlantic service on May 12th 1939.

These first runs were followed by an “inspection” trip for twelve members of the print and broadcast press on June 17th on the Atlantic Clipper.

Pan American was also starting a “northern route” transatlantic air service – again as airmail-only flights at first – to the British Isles, via Newfoundland and Ireland, on June 24th. Plans called for operating twice-weekly services to Europe, with one flight each on both the “northern” and “southern” routes. 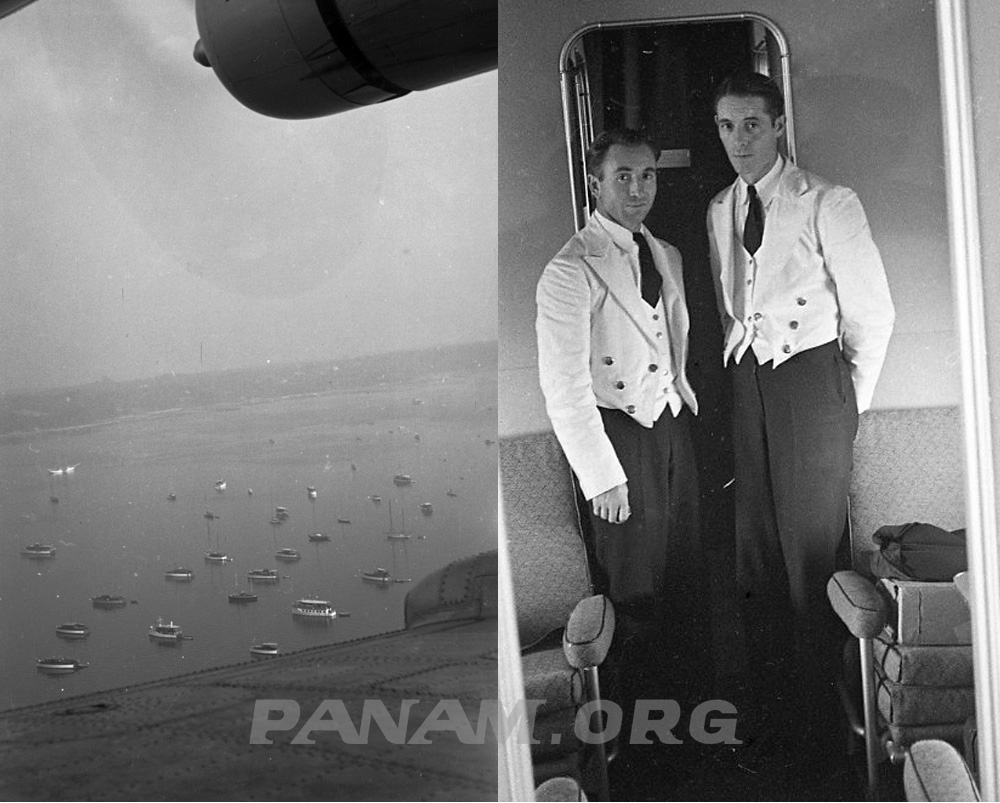 View of Manhasset Bay from the Dixie Clipper & two Pan Am Stewards onboard the first passenger flight to cross the Atlantic, June 1939. Composite of images from Passenger Betty Trippe's personal photos.

It was an exciting time for Pan Am, and for Americans. When the Yankee Clipper flew over the New York World’s Fair with the first load of airmail bound for Europe on May 20th, there was a radio hook-up between plane and ground. With a crowd of thousands listening in, Capt. Arthur LaPorte exchanged words with the dignitaries below, while the big Boeing circled above. When the brief exchange ended, the crowd cheered wildly as the plane flew off towards Europe.

The flight of the Dixie Clipper carrying the first paid passengers on June 28th marked the beginning of what was expected to be the start of a new era. Now anyone – if they had the fare – could fly across the Atlantic. The concept had great power to fire the imaginations of ordinary people, as well as marketeers who could see the value of being identified with this new dimension of modern life. Detail of Edison Company ad using the occasion to promote its Ediphone recorder: “The log of the Dixie Clipper passengers will be Voice-written by Ediphone. Their impressions during this historic flight will be recorded as they are having them, on the new desk Ediphone which Pan American Airways has installed for passengers’ convenience.  In other words, “ a secretarial service as modern as the Dixie Clipper.”The Ediphone’s use aboard the Clipper dramatically demonstrates its place in modern business and professional life.  It is literally quick as though in recording thought. One simply picks up the Ediphone receiver and talks. No button-pushing. No waiting for a second person. No limitations of time or place. Busy, important people are adopting this modern method for streamlining their work.”

We are fortunate to have these pictures taken by Betty Trippe, who flew as a passenger on that flight. She also captured her impressions in her diary. It was an image of luxury aloft that survives to this day when travel by Clipper is recalled:

“At dinner . . . everyone was in high spirits and we enjoyed gay and interesting conversation. The tables were set with white tablecloths. The dinner was delicious and beautifully served. Some contrasted this trip with the days of sailing ships which took two or three months to cross the ocean . . . yet we were crossing in twenty-four hours . . . Captain (R.O.D.) Sullivan came down from the control room to smoke a cigarette and visit with the passengers. He was a grand person and inspired real confidence by his cool cheerful manner. Everything seemed so routine and matter-of-fact that we almost lost sight of the fact this this was first airplane flight to carry passengers to Europe.”  (From Pan Am First Lady by Betty Stettinius Trippe;  1996, Paladwr Press, MacLean VA, available at the Pan Am Aware Store: https://www.panam.org/shop/aware-store) 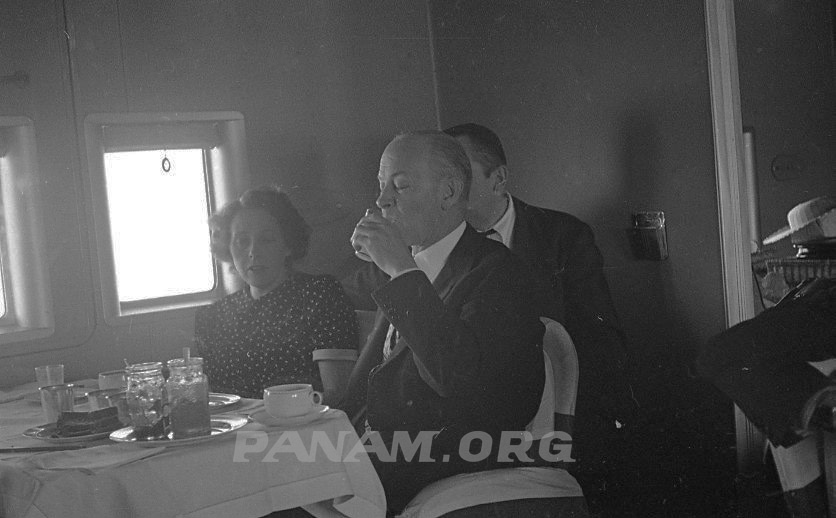 Despite the wonder and seeming normalcy of the new transatlantic passenger service there were clouds looming over the horizon that would soon impact everything about it. One can understand why Betty Trippe was so taken by the novelty and excitement of her flight on the Dixie Clipper. But perhaps in her private thoughts she might have also understood the purpose of at least one of her fellow passengers. He was “Wild Bill” Donovan – soon to head America’s secret intelligence service, the OSS. Donovan was making use of the fastest means available to get to Europe. It would be only 63 days later that Poland was invaded by Nazi Germany, and two days after that, the war in Europe was on, and would last for six more years. By its end, nothing about those brief first days of transatlantic passenger flight would be the same

But while they lasted, they inspired an indelible image of romantic air travel that persists to this day.