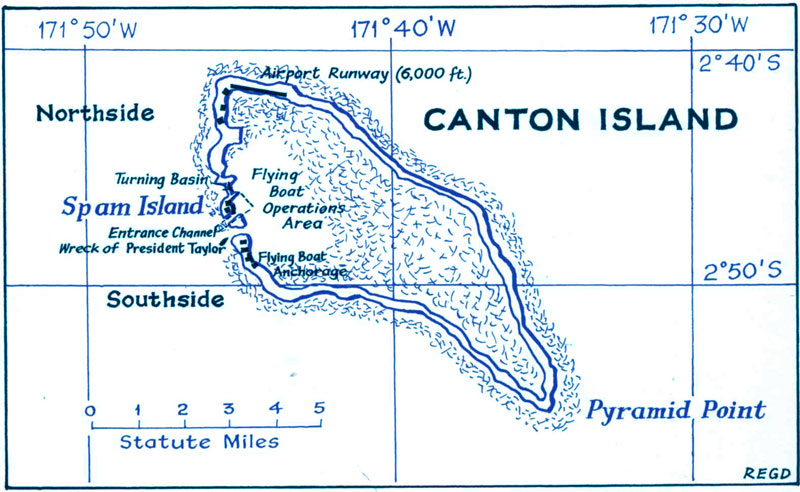 In modern historical times, Canton Island (now known as Kanton, part of the nation of Kiribati) was first noted as a navigational hazard in the days of sail. The eponymous whale ship Canton came to grief on the coral atoll in 1854 (and captain and crew all survived a heroic voyage to the distant Marianas in the ship’s boats). 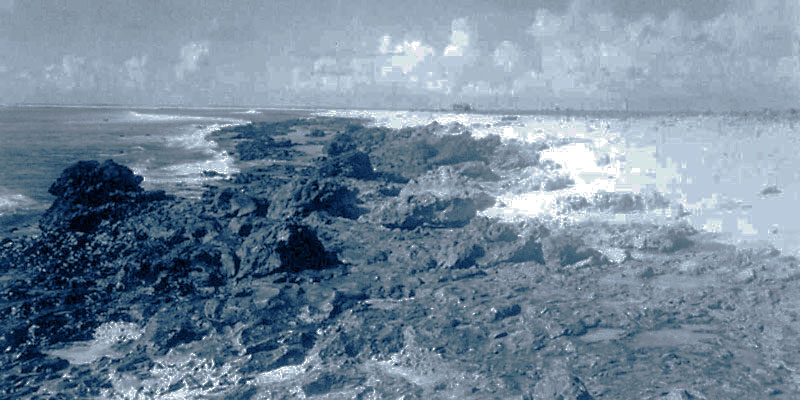 Canton was soon on the map as part of the “guano rush” of the 1850’s. Like many other Pacific islands, the rich fertilizer deposits left by millennia of bird droppings caused it to be subject of the American “Guano Act” of 1856. This provided for territorial acquisition by the United States of otherwise unclaimed bits of land where American interests found and extracted the fertilizer.

But the guano was soon played out, and the uninhabited atoll 1900 miles southwest of Hawaii was again left alone – until the 1930’s. With global conflicts warming up, international air routes through far-flung islands became a new source of interest among nations.

In Canton’s case, that interest came from both the United States, and Great Britain. Both nations saw value in Canton’s potential as a stop on intercontinental air routes, and both had some reasonable basis for a claim. The British had colonized the nearby Gilbert Islands, while the US could lay claim via the “Guano Act.”

In the event, after a minor scramble to establish an actual official presence, an unusual “condominium” arrangement was worked out, and both the US and the UK shared sovereignty, beginning in 1939. And it was fortuitous, in light of world events.

On May 18th, 1939 the S.S. North Haven, once again sailing under a charter by Pan American, arrived at Canton to bring the atoll into the web of air routes being flung around the world by America’s “merchant marine of the air.” The airline was no novice now in island flying boat base building. The job required building structures for personnel and technical operations, establishing a radio station with direction finding capabilities, clearing coral heads from the lagoon, organizing and assigning personnel requirements, and bringing all the supplies and tools necessary to do  the job. Just the dynamiting of the coral heads to provide a low-tide depth of seven feet in the flying boat operating area took over a year.  By July 14th, 1940 the base was ready for the beginning of scheduled service by Pan American clippers enroute to Auckland. 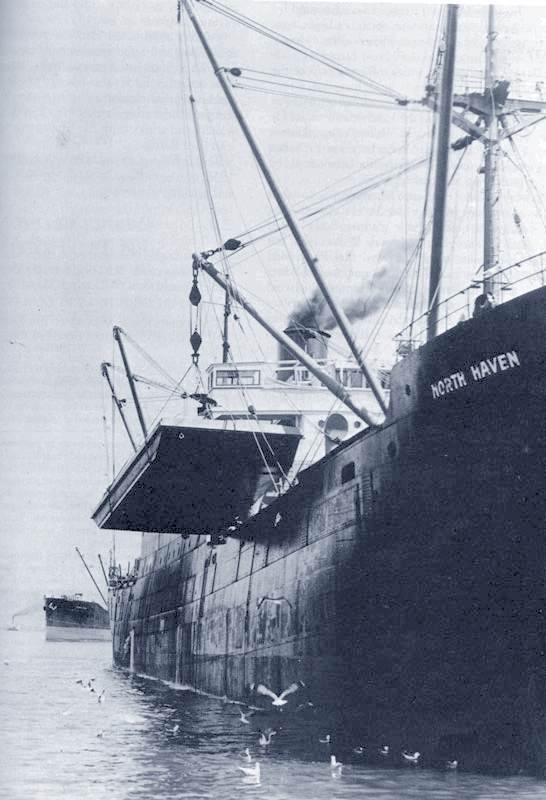 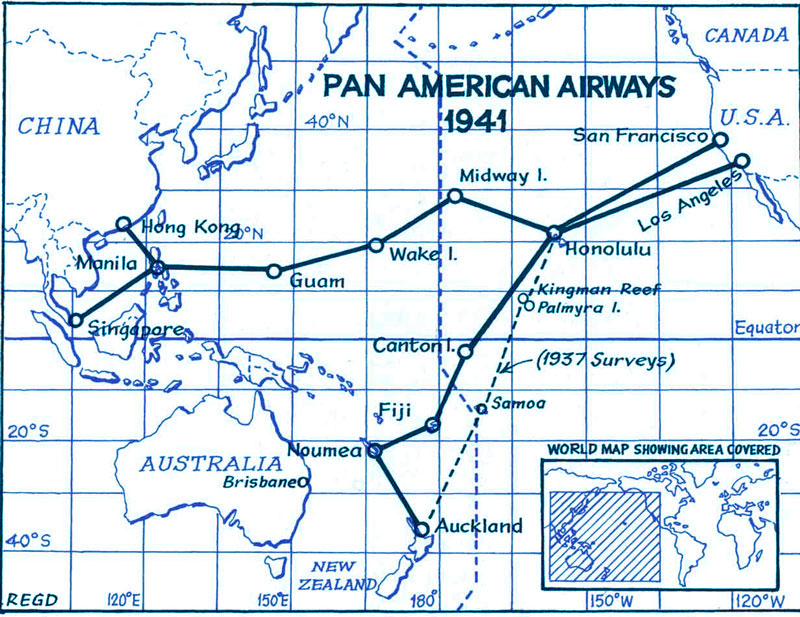 Pan Am Base at Canton Island 1940s

The start of the Pacific War was not far off. Japan attacked Pearl Harbor, Wake Island, the Philippines, and Hong Kong in December 1941, severing Pan Am’s Central Pacific air route to Manila and Hong Kong. Now the way to Australia and New Zealand in the Southwest Pacific became strategically vital, and Canton Island was a critical base.  The US Navy had already been very involved in bringing personnel and supplies to cooperate with Pan Am’s preparations for seaplane operations. In October 1941, the US Army entered the picture as well, beginning with a survey for building an airstrip on Canton’s northern side, near the Pan Am base. It was operational by the following January, and would eventually be an airport with a 6,000 ft. runway.

For all it’s strategic potential, Canton passed through the war with only some harassment in the form of a few misses from very occasional Japanese shells from submarines’ guns, and bombs from single aircraft raids. There were no casualties and only insignificant damage. If the Japanese had been so motivated, they could have taken Canton in the early months of the war with little opposition, and cut off the air route to Auckland. After the successful invasion of Tarawa and Betio in the Gilbert Islands by American forces in late 1943, Canton was no longer seriously threatened by the enemy. In that invasion, code named “Galvanic,” Canton played a critical support role.

Action in the Pacific War soon moved further west and north. While Canton remained pivotal as a technical stop on the way to Australia and New Zealand, its importance was logistical. As long as aircraft range and payload restrictions demanded places to put down for fuel, Canton remained part of the world’s airway system.

Still the Only Way to Go

When the war ended, Pan Am was quick to jettison flying boats. With new landplanes like the DC-4 available in abundance, Canton with its airstrip was still a going concern. Throughout the heyday of propliners, like the Boeing B-377, Canton Island saw a lot of business. Until 1959, with the advent of new long-range Douglas DC-7C’s that could fly from Honolulu to Fiji, the atoll saw Pan Am aircraft coming and going. That year, Australia’s QANTAS took over the base, as they still operated Lockheed Constellations that needed to refuel there. But soon the piston-powered aircraft were replaced entirely by jets, and airliners now passed Canton Island by.

Historic Footage: Pan Am B-377 and more on Canton Island in 1954, by Peter Leslie

Into Space, and Beyond

Canton then became part of the Space Age, as its role in civil aviation disappeared. NASA first used it in 1960 as a base for tracking Mercury Project orbital flights. Following that, the United States Air Force arrived in connection with military space activities, which ended in 1976. When the new Pacific nation of Kiribati was granted independence by Britain in 1979, the island’s official connection with former administrations came to an end. Today there is a small community of Gilbert islanders inhabiting what was once an important link on the world’s international air routes.