Pan Am's Fabled Gateway to The Pacific by Doug Miller 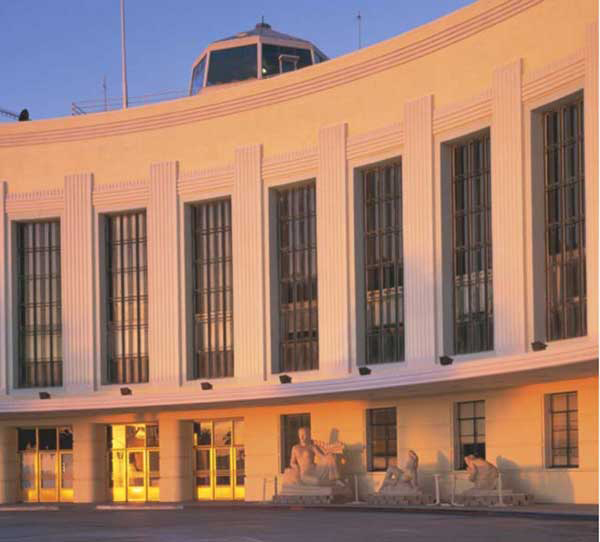 In 1935 Pan American Airways bridged the world’s biggest ocean, reaching out across eight thousand miles of the Pacific linking North America with Asia regularly by air for the first time. The accomplishment was magnificent but the original U.S. terminal for the route was anything but. The China Clipper and her two sister Martin M-130 flying boats came and went from a man-made harbor constructed from the rusting hulks of decommissioned navy destroyers at Alameda Island on the eastern shore of San Francisco Bay. The on-shore facilities were just simple structures adequate to the task of handling a handful of passengers on the once-per-week schedule (after passenger service commenced in October 1936), along with the all-important sacks of airmail, which thanks to government airmail subsidies had higher priority.

There was a lot of civic energy in the air in mid-1930's San Francisco - constructive and otherwise. The Depression was making life tough for a lot of people. The city had experienced a cathartic and violent general strike in 1934. But there were tangible symbols of what a better future might bring too. Two magnificent bridges were under construction: the San Francisco-Oakland Bay Bridge and the even more spectacular Golden Gate Bridge. Civic leaders decided to boost San Francisco's up-and-coming image even further with a world's fair. And to add utility to the concept, (and get Federal dollars committed to the project) the plan called for an intermodal airport on the proposed 400-acre man-made island that would be the site of the fair.

Within sight of Pan Am's Alameda base, just north of Yerba Buena Island (also known as Goat Island) was a shallow area known as Yerba Buena Shoals. This maritime navigation hazard would be transformed into the site of the world's fair, officially known as the Golden Gate International Exposition. Work began in 1937, with a bulwark being driven into the shallow depths to form the island's perimeter. Massive amounts of rock and sand scooped up from the Bay were dumped into the enclosure, to be topped off with thousands of tons of topsoil to complete what would be known as "Treasure Island" in a tip of the hat to California's gold rush past.

Absolutely integral to the plan was Pan American's new flying boat terminal, consisting of two large hangars and a magnificent terminal building. This development was in keeping with the future plans of the airline. It was obvious from the early days of the transpacific service that the Martin M-130 flying boats, as advanced as they were in 1935, would soon need to be augmented with aircraft that could carry more payload and fly farther. In 1936, Pan Am signed a contract with Boeing Aircraft for six new flying boats, the Boeing B-314's. It was these aircraft - with three more added later - that would really showcase the Treasure Island base.

Treasure Island was a joint project of the Federal WPA, PWA, the City of San Francisco, and private funds. The US Army Corps of Engineers oversaw the engineering of the island. The construction, like many Depression-era public projects, was completed in record time. The world's fair, it was hoped, would turn a profit by offering all sorts of attractions to lure both high-minded seekers of culture, as well as those just wanting some diversion. But one attraction that appealed to every sort of visitor was the Pan American Airways operation. When the fair opened, the big Boeing and Martin flying boats were on display in the hangars, as they underwent routine maintenance in between flights. If visitors were lucky, they might even witness an arrival, or even more exciting, the departure of a clipper.

The reinforced concrete Art Moderne style terminal building, topped with a glass control tower, along with the large hangars, made a fitting terminus for the world's first true transoceanic air route. The design was a collaborative effort by two of San Francisco's most prominent architects. George William Kelham had been trained at the famous L'Ecole des Beaux-Arts in Paris, and helped design and build San Francisco's Palace Hotel, worked with William Peyton Day, a San Francisco native who was vice president of the Exposition and its director of public works. Day's prior work also included hotels in San Francisco: The Mark Hopkins and Sir Francis Drake. The three buildings they designed for Pan American's base - the only ones on the new island meant to be permanent - were first to be built on the island. The plan called for the removal of exposition buildings at the close of the fair, making way for the future airport runways. Thus Treasure Island would serve both seaplanes and land planes. The Golden Gate International Exposition opened in February 1939. It was an era when aviation was a sure-fire crowd pleaser, and there were always plenty of onlookers whenever there was a Pan Am clipper to be seen, in the Hall of Transportation hangar or riding at anchor just offshore.

Pan Am's flying boats were boarded with something of ceremonial pageantry. First, with the ringing of a single bell, the crew, led by the captain and first officer would smartly march down the pier to the waiting clipper. When the bell rang twice, the passengers would follow. Soon, with a "Panair" launch leading the way to scout for floating obstructions, the big flying boat would be wending its way out of the "Port of the Trade Winds", as the little harbor was known, to the bay where it would make its takeoff run.

During the run of the fair, Pan Am was working hard to build up its Pacific route network. For a brief period in 1939, with the inauguration of Pan Am's corresponding transatlantic service, it was now possible to fly completely around the world on commercial airways. Even after war broke out in Europe that September, sharply curtailing transatlantic air service, Pan Am kept expanding its Pacific services. By May 1941, the clippers were flying down to Auckland New Zealand, and past Manila to Hong Kong and Singapore. Treasure Island was truly America's aerial gateway to world across the Pacific. Radio Broadcast of Arrival of the California Clipper on Treasure Island, November 14, 1941:

With war looming, Uncle Sam saw the eminent value of a base at Treasure Island, and with the removal of the world's fair, the US Navy soon moved in, using some of the fair's "temporary" structures. Plans for runways were scrapped. Because Pan Am and its fleet of ocean-crossing clippers was integral to America's defense, there was no question but that the airline's base would remain. When war did arrive, on the wings of Japanese warplanes at Pearl Harbor, and across the vast Pacific basin, it severed the peaceful international air routes stretching out from Treasure Island. Pan Am planes, crews, and facilities were drafted into the war effort. For most of the next four years, Pan Am's Treasure Island base served the nation. The elegant clippers were joined by big military seaplanes, also operated by Pan Am crews, to be sent out across the Pacific on wartime missions.

Towards the close of the war, the Pan American operation was relocated to what had become San Francisco International Airport - SFO - south of the city, which would soon be seeing fleets of new landplanes replacing the aging and now obsolete flying boats. (Interesting to note: SFO'S new director was William Peyton Day.)