Despite the advances in air transportation, commercial flying—especially over the oceans—was still a risky business.

I would soon learn just how risky. 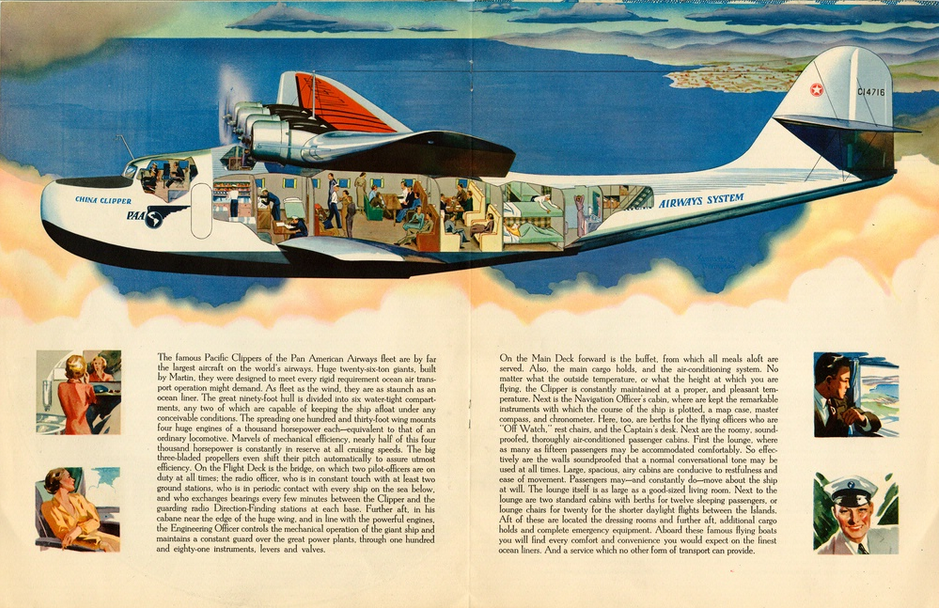 My very first time aloft in an airplane was an orientation flight over San Francisco Bay on board one of the Martin M-130 Clippers. The flight deck of the Martin was rather cramped compared to the Flight deck of the Boeing B-314. I was a Flight Radio Officer, and radio operators sat at a small desk directly behind the co-pilot and the flight engineer sat on what amounted to a small shelf just above and behind that. If the radio operator was in his seat, he would have to get out and step down to the main deck in order to allow the flight engineer access to his respective operating location.

My next assignment was to get outfitted for my uniforms...

There were two styles of uniform; on the Pan Am Clippers I wore the standard Navy blue double-breasted suit with white peaked hats and a small half-winged badge pinned to the breast pocket, denoting my status as a Flight Radio Officer. When I was assigned to fly on the Navy PB2Y3 or PBM aircraft, I wore a light khaki uniform with a soft campaign cap for headgear. As soon as I was outfitted in these uniforms, they took my picture. These were filed in the officer's personnel folders for use by the company as public relations photos when needed. We called them our “obituary photos." You can guess why.

Despite the advances in air transportation, commercial flying—especially over the oceans—was still a risky business. I would soon learn just how risky. 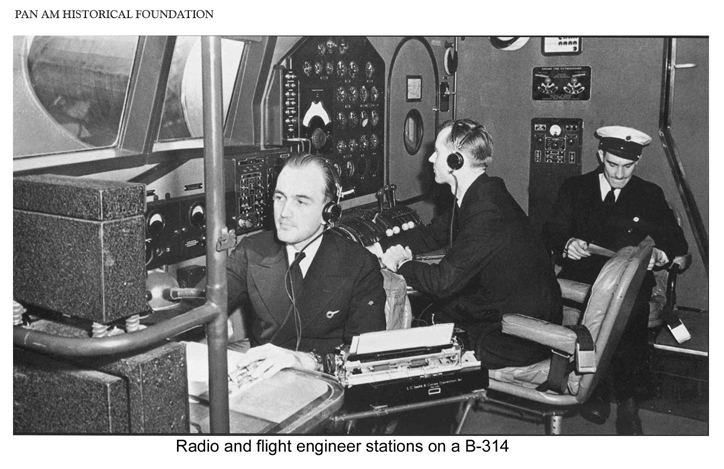 On January 20th, 1943 I received my first assignment as a flight crew member. I came on board one of the Boeing B-314 flying boats as the Second Radio Officer on a regular scheduled flight from San Francisco to Honolulu. We departed Treasure Island at about three in the afternoon. As we headed west, we encountered a strong storm that created very strong headwinds and heavy turbulence. After about three hours the Captain decided that the headwinds were too strong to make it all the way to Honolulu, so we turned around to return to Treasure Island.

By the time we arrived back over the Bay, the storm was going full blast. In low clouds and rain, with poor visibility, we made either two or three attempts at landing in the seaplane channel alongside the Oakland Bay bridge before we got down safely and tied up at the dock. The crew was ordered to stand by while the operations office examined the weather reports to determine if we could try again later, when they thought the winds would die down enough.

By this time it was very late at night. I decided to take a nap on one of the couches in the terminal, assuming someone would awaken me in time to depart again if they had decided to give it another go. Instead I slept through the night and awoke in the morning, January 21st. The storm was still raging.

Our flight had been cancelled, but the terminal was abuzz with news about another Pan Am Clipper, one overdue on a flight in from Honolulu. It was the Martin M-130 Philippine Clipper and it had flown through the same storm, but the winds that were headwinds for us had been tailwinds for the Martin. It had made the crossing from Honolulu in a record nine hours—unheard of in those days. Unfortunately the quick crossing brought it to the California coast much earlier than anticipated. Due to the bad weather, the captain had elected to try landing at the alternate landing site at Clear Lake, near Ukiah, California, a short distance up the coast, where he hoped the weather would be better.

It was not. Upon attempting a let down to Clear Lake in heavy clouds, the Clipper crashed into a mountain and all aboard were killed. This was my introduction to flying over the ocean.