How Pan Am Went To War 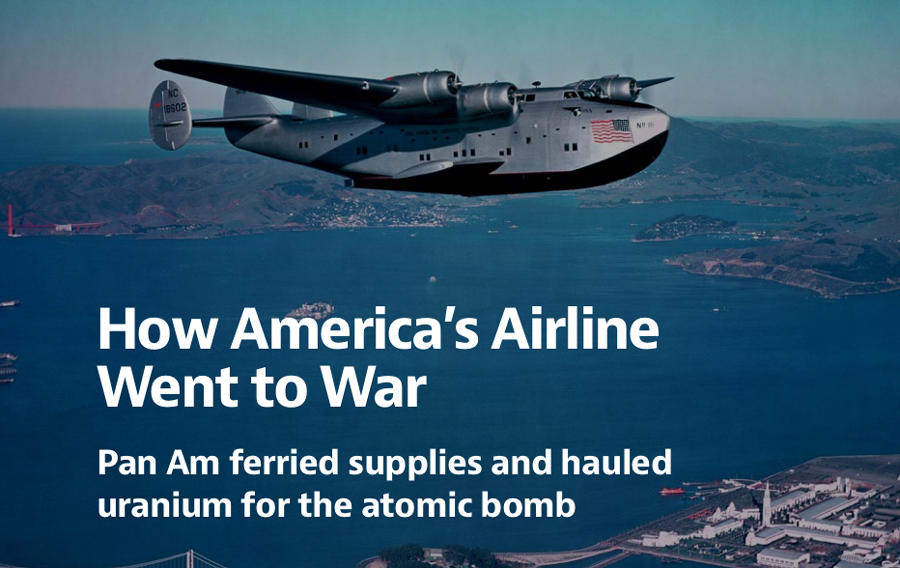 A Boeing 314 Clipper flying over San Francisco in 1942. Library of Congress Photos.

How America's Airline Went To War, by Steve Weintz

Now only a distant memory, Pan American Airways once flew so high that even the moon seemed within its grasp. Its advanced technology, skilled workforce and global reach were the envy of its competitors.

It had such a wide reach around the world, Pan Am turned into a veritable wing of the American war effort during World War II. During the war, the company sent its pilots and planes into the fight.

Pan Am shuttled a president, supplies for Chinese troops and uranium for the atomic bomb.
But behind the popular persona of United States’ flag airline, there was a corporate executive ready to aid the nation’s defense.

For 75 years, the bright blue, silver and white aircraft of Pan Am personified America—like Coca-Cola and Cadillac.

Its aircraft and aircrews epitomized the glamour of international travel. The company’s headquarters inside a modernist Manhattan skyscraper was a symbol of 1960s American vigor.

Pan Am flew the first 707 and 747 commercial jetliners. Futurists speculated the company might one day dominate space travel. Pan Am even appeared in the 1968 film 2001: A Space Odyssey as a fictional commercial spaceflight carrier.

The early days of commercial aviation are closer to Silicon Valley than Detroit or Hollywood. Bold and young entrepreneurs jumped into exciting new businesses during their infancy, building empires that shaped the 20th century.

Juan Trippe personified these founders. In 1927, he founded Pan Am with only a handful of pilots and planes. Business boomed in the late 1920s and early 1930s, despite the depression. The firm ferried passengers from Florida to Caribbean and Latin American destinations.

By the early 1930s, Trippe was ready to offer a route to Europe. But the United Kingdom frustrated his plans by denying Pan Am access to Newfoundland and Ireland—stopover destinations necessary because of the limited range of the era’s aircraft. 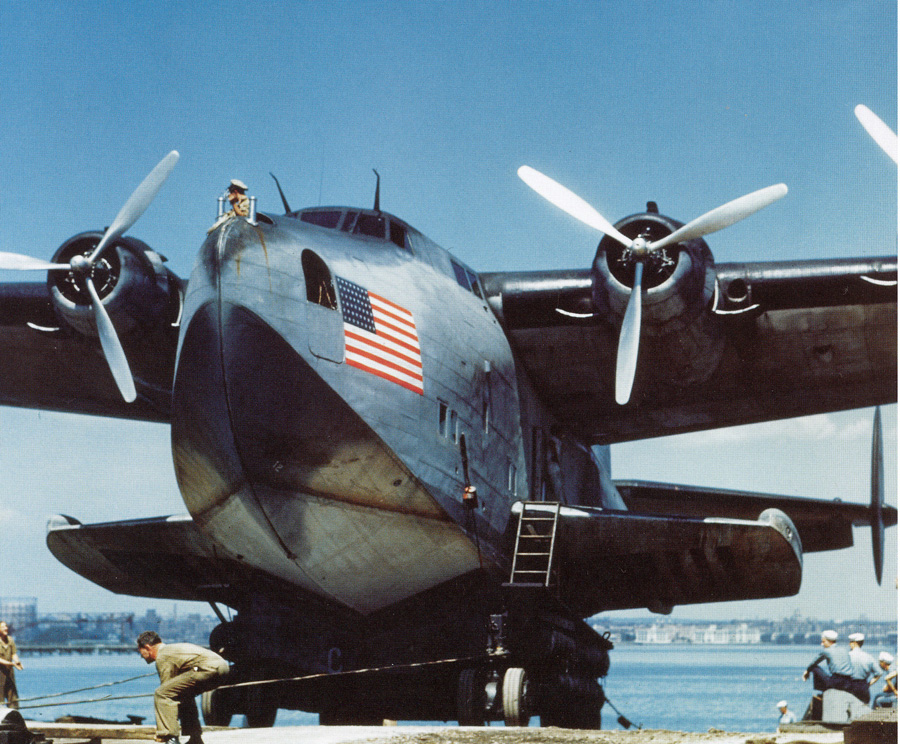 The United States possessed remote Pacific islands—serving as stepping stones to the Philippines. These islands could also service a commercial air route.

But Trippe still needed bigger aircraft. Aircraft manufacturer Glenn Martin built three of them. The Martin M-130 rivaled all other airliners of its era, until the advent of Pan Am’s other famous flying boat, the Boeing 314.

Pan Am called all its planes “Clippers” after the famous American sailing ships, but the giant Martin and Boeing flying boats are the most closely associated with that name.

On Nov. 22, 1935, the first transpacific commercial flight splashed across San Francisco Bay and ducked under the unfinished Bay Bridge on its way to Hawaii. Five days later—after stops at Midway and Wake—the Clipper touched down in Manila Bay, bearing a handful of passengers and a big load of U.S. mail.

The airliner set up the China National Aviation Corporation in partnership with the Kuomintang government. Passengers could fly from San Francisco to Beijing on planes owned or operated by Pan Am.

For six years, the Pan Am Clippers winged across the Pacific bearing businessmen, diplomats, officers and celebrities.

In 1939, the company flew giant, Boeing-made Clippers to Europe after the British agreed to permit the company to operate within its dominion. Following the Nazi invasion of Poland that year, Pan Am quietly undertook airfield construction and aircraft-ferrying operations under a secret War Department contract.

By December 1941, the firm’s air routes spanned half the globe, from the Philippines to Ireland and Argentina. Even with the war in Europe, the Clippers kept flying and ferrying important people across the oceans faster than any steamship. 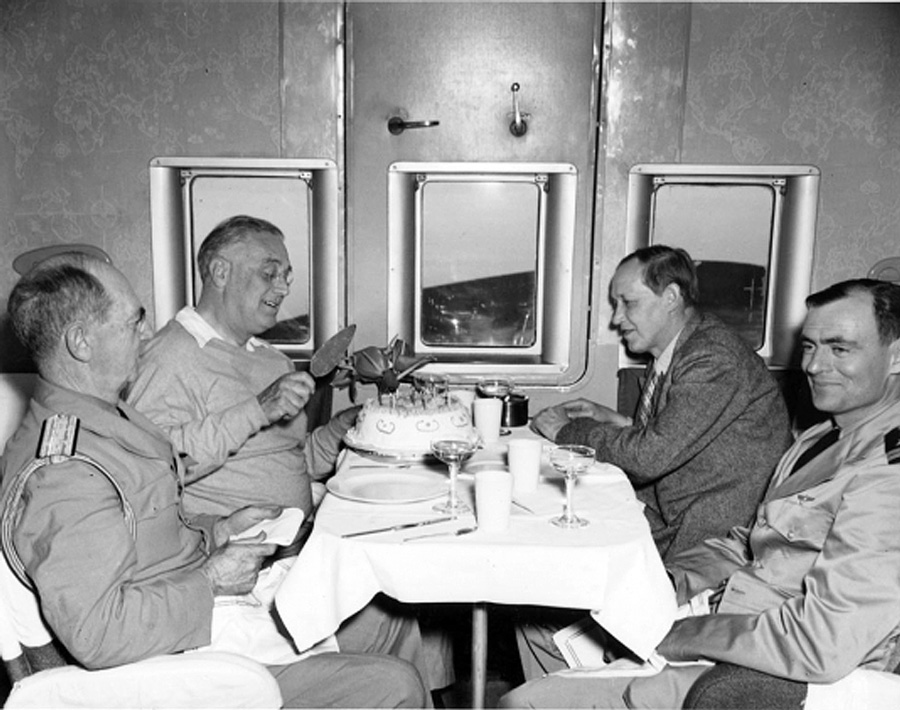 The Japanese attack on Pearl Harbor openly brought Pan Am into the fight.

American airliners and their bases became hunted prey. During the assault on Hawaii, Japanese aircraft bombed the Pan Am base along with battleship row and Hickham Field. One Clipper flew around the world—from Wake to New York—to escape attack.

Pan Am covered its Clippers’ beautiful silver and blue livery with military camouflage. The company’s pilots, engineers and radio operators became serving members of the military.

Four remarkable training and transport efforts adorn Pan Am’s wartime experience. For one, America entered World War II with a shortage of men, machines and expertise. Pan American Airways had all three, and offered them to the government.

The airline possessed the world’s only transoceanic transport system, and the infrastructure to support it. Thousands of pilots and navigators trained in Pan Am’s state-of-the-art facilities in Miami, Florida. Some of Lt. Col. Jimmy Doolittle’s aircrews trained with Pan Am.

Japan’s lightning conquest of Southeast Asia closed off supply routes to Chinese forces—except for a dangerous air corridor over the Himalayas.
In April 1942, Allied air crews began flying “The Hump” between India and southern China. Many of the planes and pilots involved worked for Pan Am. Years of flying over warlord territory—and their evacuation of Hong Kong dignitaries—bolstered their experience.

For three years—until the war’s end—the Hump flights delivered thousands of tons of supplies to Chinese troops, who tied down Japanese military resources needed to fight in the Pacific.

On the other side of the world, Pan Am’s transoceanic expertise flew a president to Africa—and back.

On Jan. 11, 1943, Pres. Franklin Roosevelt boarded the Dixie Clipper with his advisers and flew by way of Trinidad to Belem, Brazil. Then he hopped across the Atlantic to Britain’s West African colony of Gambia. His other staff followed aboard Pan Am’s sister ship, the Atlantic Clipper.
From Gambia, Roosevelt and his team flew to Casablanca for a major summit with British Prime Minister Winston Churchill and Free France leader Charles de Gaulle. That’s where the Allies agreed on their final plan to defeat Germany and Japan.

In the midst of returning from the first overseas trip by a wartime president, Roosevelt celebrated his 65th birthday flying over the Atlantic. In a certain sense, the Dixie Clipper was the first Air Force One.

Pan Am also carried other important—and highly classified—cargo along its African route.

When World War II began, uranium came from only three places—Canada and what are now the Czech Republic and Gabon. The Nazi seizure of Czech uranium mines alarmed Albert Einstein, who noted it a famous letter to Roosevelt, urging him to pursue the atomic bomb.

Belgium was under Nazi rule, and its African colonies remained vulnerable. Gabon—then part of Belgian Congo—provided the richest uranium ore. Some of that ore already sat in America. But a huge, highly secret program needed all the uranium it could get … and quietly.
Pan Am Clippers carried tons of Gabonese uranium ore to the U.S. in deep secrecy, high above any U-boat threats to shipping. Once refined, the uranium made its way to Oak Ridge, Tennessee, where it became bomb fuel.

About 75 percent of the uranium in the Little Boy bomb dropped on Hiroshima originated in Africa, shuttled in secret with Pan Am.
Today, Pan Am endures only as a symbol of the American century, and a victim of airline deregulation brought on by the government it once partnered with. The company faced rising competition from international carriers.

Passengers also stayed away after several crashes and the terrorist bombing of Pan Am Flight 103 over Lockerbie, Scotland. Unable to establish a domestic network to compensate for the loss of its international flight dominance, Delta Airlines absorbed the carrier in 1991.

But as long as the 20th century remains a vivid era in American history, Trippe’s global enterprise will remain bright in memory. It’s well we remember its heroics—as well as its style.

View the original article on Medium.com: War is Boring