...the true start of Pan American Airways, as a scheduled airline, came to pass on October 28th, 1927. That day, the Fokker F-VIIa/3m (soon to be christened in Havana as the “General Machado”) left Key West’s now-functional Meacham Field, and set off for Havana, carrying the US Mail on its very first scheduled delivery.

No one was going though, other than the pilot Hugh Wells, Ed Musick  (flying as co-pilot – he had yet to secure the recently-instituted Bureau of Air Commerce pilot’s license), and mechanic John Johansen, along with the mail...

Pan Am’s birth as an operational entity is legendary: The very young aviation enterprise was saved by a nick-of-time, skin-of-their-teeth event on October 19th, 1927. But it wasn’t exactly the beginning of the airline. The US Post Office had set that date for Pan Am to complete the first contractual obligation for airmail delivery from Key West to Havana. If the deadline wasn’t met, it might mean the cancellation of the mail contract, and the likely forfeiture of a $20,000 bond the company (officially the Aviation Corporation of the Americas) had posted with the Post Office. Meacham Field, the new airfield at Key West was not ready for land-plqne operations, and they were the only aircraft the brand-new airline had at the time. But thanks to the almost miraculous happenstance appearance of pilot Cy Caldwell, who was willing to do a bit of freelance work, the Post Office deadline was met. 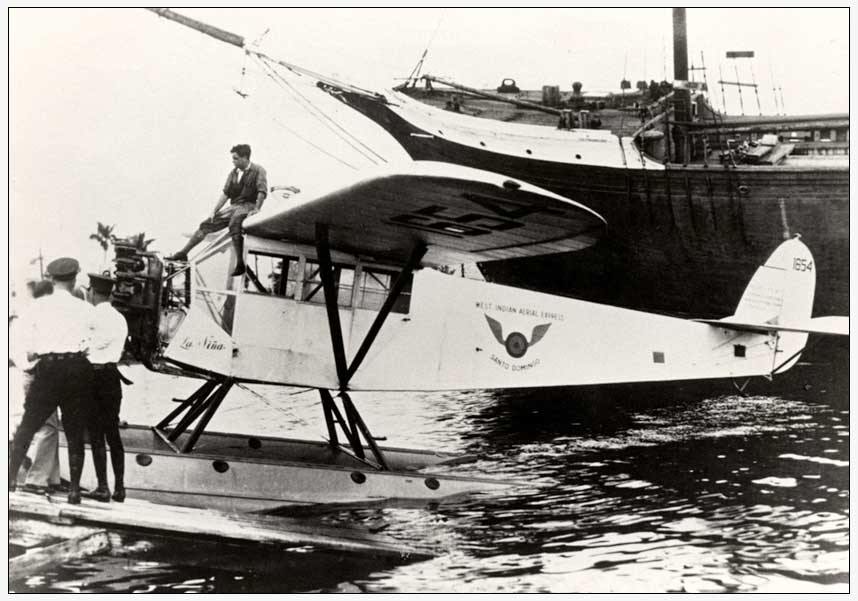 Cy Caldwell atop the Fairchild FC-2 “La Niña,” in Miami, before taking the plane on to Key West  (Courtesy of Monroe County Library Collection)

Of course it wasn’t really Pan American’s start as an airline - it was a charter flight.

Caldwell was flying a Fairchild FC-2 floatplane dubbed “La Niña,” on a delivery flight for its new owner, West Indian Aerial Express (WIAX) to Haiti. Even though the charter was an unexpected windfall for WIAX, it would prove cold comfort to them in the long run. (And as Caldwell wrote years later, if he had known about the $20,000 Pan Am had on the line, the $200 charter fee would have goon way up!) Basil Rowe, the founder of WIAX, would sell out to Pan Am in the next year, because WIAX would fail to secure a US Post Office airmail contract. Pan Am did, and that made all the difference. 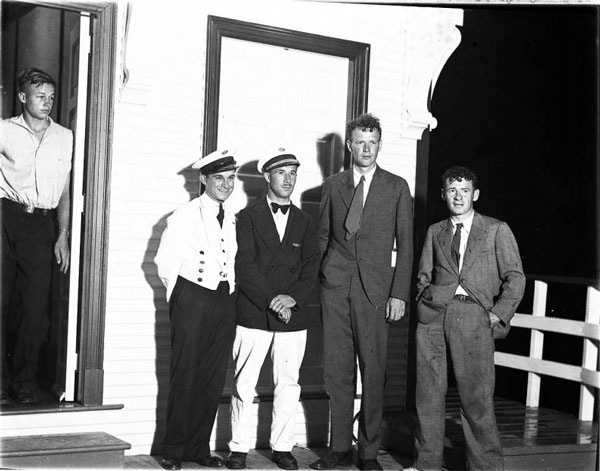 The Key to Success

Pan Am’s early road to success was built on various pillars - the outsized vision and ambition of its founders, technical innovation, political networking, and marketing savvy - but far and away the most critical dimension, in the beginning, were US Foreign Airmail contracts - Pan Am’s principal source of revenue for some time. 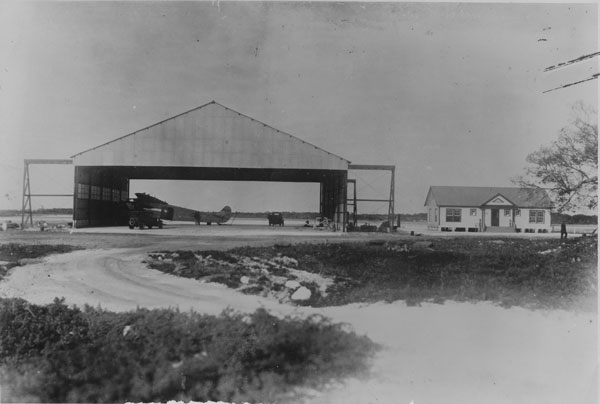 A humble home base: The Fokker “General Machado” in the hangar at Meacham Field, Key West, ca 1928. (Pan Am Historical Foundation Collection)

Meeting the obligatory start of service deadline was merely the planting of a seed, you might say. The guaranteed income that would keep Pan Am’s fleet flying would come from government mail contract payments, and that meant getting the mail on planes and delivered to destinations, and critically, on a regular schedule. The US Post Office expected nothing less and everything else paled in importance for the airline. 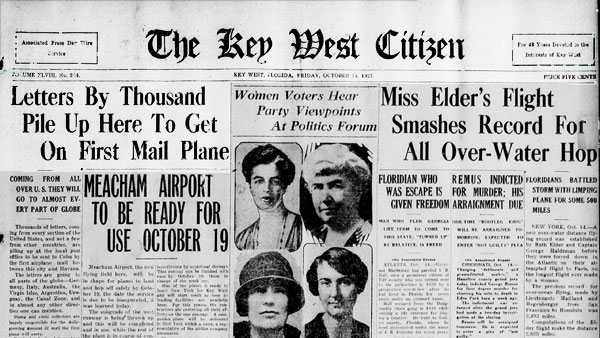 Letters had poured in from around the country in anticipation of the initial foreign airmail flight. (Courtesy Monroe County Public Library)

So the true start of Pan American Airways, as a scheduled airline, came to pass on October 28th, 1927. That day, the Fokker F-VIIa/3m (soon to be christened in Havana as the “General Machado”) left Key West’s now-functional Meacham Field, and set off for Havana, carrying the US Mail on its very first scheduled delivery.

There was no lack of interest among the American public, still in the grips of aviation mania thanks to Charles Lindbergh’s solo transatlantic flight five months earlier. The “Key West Citizen” newspaper reported that Jack Whitbeck, Pan Am’s local operations chief, had turned down hundreds of requests from potential passengers. One man, the report said, had wasted $12.50 (a substantial sum in 1927) on a long-distance call from Georgia begging to be included on the flight.

No one was going though, other than the pilot Hugh Wells, Ed Musick  (flying as co-pilot – he had yet to secure the recently-instituted Bureau of Air Commerce pilot’s license), and mechanic John Johansen, and the mail.

In fact, that first scheduled flight was something of close call itself. The latest mail to Cuba, along with pilot Wells himself, only arrived in Key West earlier that very morning, on the Florida East Coast Railway train from Miami. But it all worked out. The Fokker took off as scheduled (albeit slightly delayed, by a few minutes). 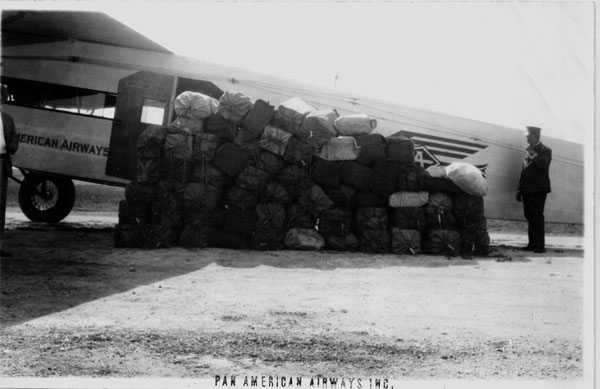 A Heavy load for a Fokker equaled solid revenue for Pan Am. (Photo PAHF/Mason Collection)

The flight took one hour and ten minutes and carried 772 pounds of mail. There were hundreds of spectators to witness the plane’s departure, even at the early hour of 8:00 am. The arrival in Cuba was also delayed, just a bit, as the Cuban authorities had requested the plane do a fly-over of Morro Castle and other Havana landmarks before heading to Camp Columbia, the Cuban Army airfield where it was expected. 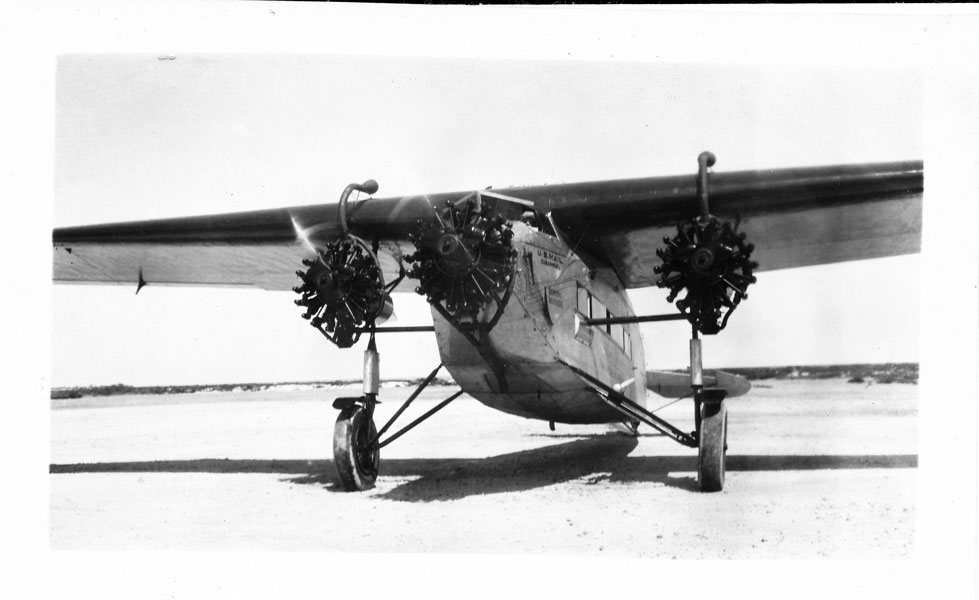 The Machado at Key West: Her three Wright Whirlwind engines turning over, the General Machdo was set to go. (Photo Pan Am Historical Foundation Collection)

The way forward to six decades of commercial airline history was now open. The first flight was just the foundation and much more needed to be managed. We have a fuzzy newspaper photo from an unidentified English language newspaper in Havana, showing Ed Musick with his Pan Am colleagues presumably soon after the first scheduled flight. 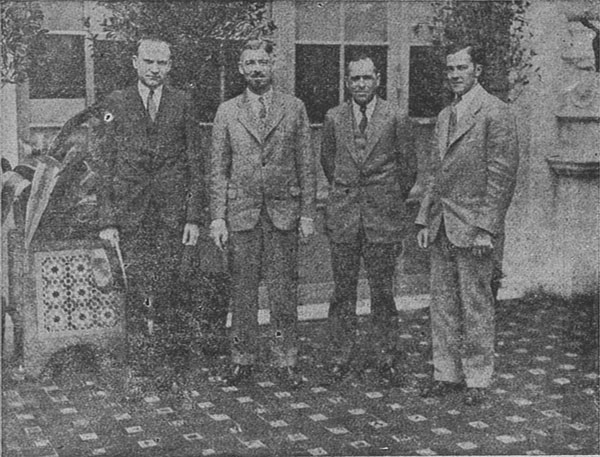 By the following January, Pan Am began flying passengers as well as mail in their small fleet of Fokkers. That year, 1928, was spent on strategizing, planning, and gaining experience for the breakout that was to follow at the start of 1929. In September 1928, the short international route was doubled when Pan Am shifted operations to its much more convenient new airport at Miami (now Miami International).

Even more significantly, in 1928 Congress passed the Foreign Airmail Act, which was at the core of Pan Am’s business strategy for a very long time. Now the Post Office had the legal structure to grant contracts for ever-longer and farther-reaching airmail routes, and as the new law stipulated, the contracts didn’t have to go to the lowest bidder, if another bid was considered a better choice. In practical terms, this would mean that Pan Am would always come out on top, thanks to its clearly superior organization, experience, and infrastructure.

It was a green light for a path to success for Pan American, opening routes far beyond Havana, down the long chain of the Antilles, and through Mexico to Central America and beyond. It was an unbeatable formula for both the government and Pan American - a successful partnership between a private American corporation and the US government that provided a win-win arrangement for both parties for years to come.

When the US airline industry was roiled by a Democratic-led Congressional investigation into the improper granting of government airmail contracts by the prior Republican Administration in 1934, Pan Am ‘s contracts were left essentially untouched, while those of America’s domestic airlines were dealt with some severity.

And regardless of the change of administrations in Washington from Republican to Democrat there would be a high official from the US Post Office present to sing the praises of Pan Am at the launching of major new endeavors by the airline, such as the inauguration of transpacific service in 1935, or the opening of the new Marine Air Terminal at what would soon be named La Guardia Airport in New York City in 1940.

It was as if Pan Am was integral to the success of America on the international stage, and deserved official notice. Of course, this was exactly the case.

In January 9, 1929, Assistant US Postmaster General Irving Glover presented this short speech at the dedication of Pan Am’s new international airport in Miami. He heaped praise on both the city and Pan American, as both were making major contributions to the brave new world of international air communications made possible by the system of foreign airmail that was now beginning in earnest.

(Video used by permission, courtesy of the Moving Image research Collection at the University of South Carolina: MVTN_1-723)

(Video used by permission, courtesy of the Moving Image research Collection at the University of South Carolina: MVTN_1-723)