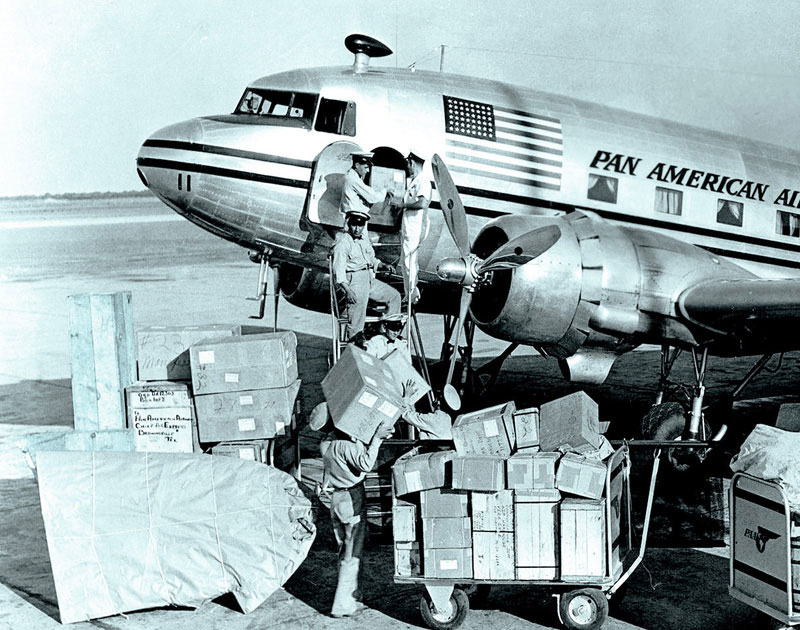 75 years ago, May 22, 1942, Pan Am initiated the use of corrugated cardboard cartons for Cargo, reducing weight of some shipments by as much as 40% -- or an additional flight facilitated for every three flown.

Shown here, Cargo being loaded on Pan Am DC-3 at Miami

Pan American Airways' Air Express network was linked to that of Railway Express Agency (REA) and its 23,000 stations across the US. This facilitated the shipment of goods from places in the US to all of PAA's growing global route network, which, by the following year, included the brand new transpacific route.

Air express service to Europe was delayed until 1941, due to the heavy passenger loads caused by the coming of war in 1939, limiting payloads. Insurance rates for surface shipping skyrocketed during the war, making air express often the cheaper alternative, when space was available (because of the priority given to government mandated shipments).

Along with the agreement with the REA, Pan Am developed the Pan American Airways Document, which eliminated the dozens of documents that were previously needed when shipping items across international borders.

After the war, Cargo operations increased dramatically. By 1948, Pan American Airways was operating all cargo flights using DC-4 and 10 C-46 Curtiss Commando aircraft. That year the company hauled about 18,000 tons of freight fleetwide.

May 22, 1942, Pan Am initiated the use of corrugated cardboard cartons for Cargo, reducing weight of some shipments by as much as 40% -- or an additional flight facilitated for every three flown.

The specialization of freight operations would continue using newly developed aircraft as the years passed.

* From: The Empire of Pan American Airways by Robert Winston Hawes (Boston University, 1943) submitted in partial fulfillment of the requirements for the degree of Master of Business Administration 1943