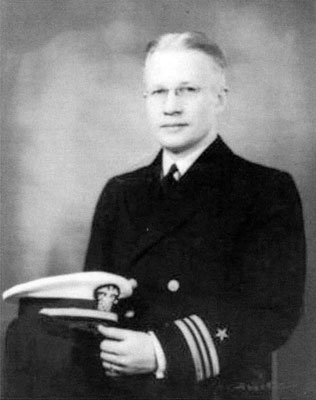 The Commodore and the President. Excerpt from John C. Leslie's Memoir:

In 1943, John C. Leslie was a veteran of 14 years in the Pan American Airways organization. He had been Pacific Division Engineer when the transpacific routes were opened, and in January 1941 he was promoted and transferred to New York to become Manager of the Atlantic Division. As a result he was given command of a wartime special mission like no other – safely get President Roosevelt to Africa and back for the Casablanca conference. The following is an excerpt from his memoir, published here with the permission of the Leslie Family Archive.

In January 1943 I was given what I suppose was my major assignment in the war. It was to organize President Roosevelt’s trip to Casablanca in two of our big Boeing flying boats. As a Naval Reserve officer, I got a call from a friend on active duty who said I’d better come down and discuss “certain matters.” When I got there, I was told what was afoot -- obviously in the utmost secrecy.

When I returned to LaGuardia, I quietly arranged for the two aircraft to be available on the designated day.  I looked at the duty schedule of our captains, to see who would be available when needed. I was determined not make a “special selection” to fly the President of the United States, on the grounds that all of my captains were fully qualified for that purpose, and there was no way of distinguishing one from another. It happened that the captains next in line were Howard Cone and Richard Vinal, both graduate aeronautical engineers from the University of Seattle. In sequence. Cone was to pilot the President’s plane and Vinal the second plane on which most of the rest of us would ride for the entire journey.

I left New York with two big flying boats without anybody else knowing where we had gone. I told my wife that I could not even suggest where I was going, or how long I’d be there, but if she watched the papers she might be able to guess. Before going to Washington, I remember telling Harold Bixby that it smelled to me like something very, very important, at which point he got my meaning and said, "Oh no, that is absolutely impossible" or words to that effect.

We flew the two ships to Miami and tied them up at opposite sides of the Pan Am terminal at Dinner Key. I was instructed to report to the office of the Rear Admiral commanding the local Naval District. Then, reviewing the plans, some of us were told to go out to be on hand when the President’s private rail car, the “Ferdinand Magellan” arrived in the outlying railroad yards, close to midnight. There was nothing for me to do there except to meet my official contact for the trip, the President's Naval Aide, Captain John McCrea.

I returned to the flight office at Dinner Key where the passenger list and the other ship’s papers were being prepared. I recall the cold blue fluorescent light, the atmosphere heavy with cigarette smoke, and Captain Cone coming up to look at the passenger list. He found listed as number one a "Mr. Jones." He began to speculate out loud as to who that could be, such as Jesse Jones of the Reconstruction Finance Corporation. Not until he walked down to his aircraft to see the preparations made for boarding the President did he realize what his assignment was.

Nor did I realize until that time how severely handicapped the President was. There had to be a special ramp from the dock to the aircraft and he had to be carried into the passenger cabin. 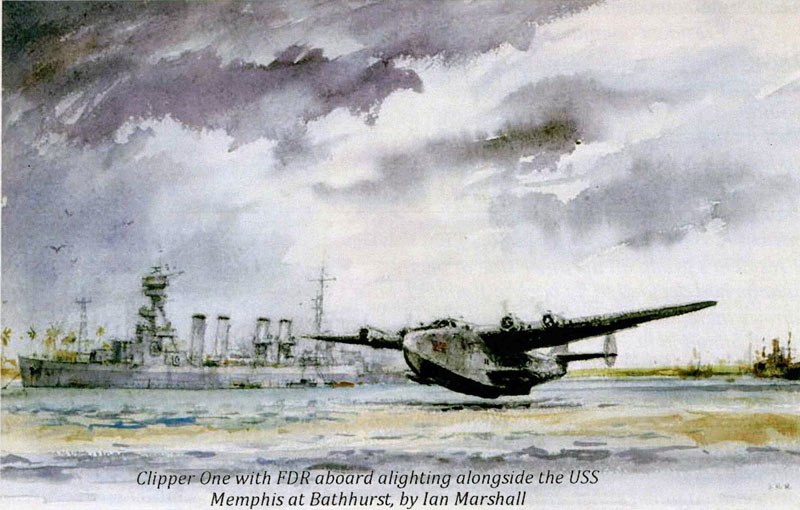 The trip from Miami to our first overnight stop in Port-of-Spain, Trinidad was uneventful. The next day we flew to Belem, Brazil to refuel and then takeoff at night for the trip across the South Atlantic to Bathurst, British Gambia. There the USS "Memphis" was waiting to accommodate the President and all the rest of us. This was the same cruiser, an Admiral's flagship, that carried Charles Lindbergh and the "Spirit of St. Louis" back from Paris to New York in 1927 after his historic flight. By the time we reached her in 1943, she was in West African camouflage, and hence was called the "Pink Lady". She was said to be about five feet lower in the water than originally designed due to the great weight of new radio and radar equipment on her masts.  The President continued his journey from Bathurst to Casablanca in a Douglas C-54 piloted by Otis Bryan of TWA. We sat out the ten days of the conference very comfortably aboard the Memphis.

When the President returned to Bathurst after the conference, it was planned that he should go to Fisherman’s Lake, Liberia to have a brief meeting with the President of Liberia. From there we were to take off from that nicely-protected water area direct to Natal. To my consternation, word reached me from the President’s group on the other side of the lake that he had decided to fly back to Bathurst, have dinner there, then take off from Bathurst to Natal at midnight. I had utterly no way of reaching anybody to advise against this procedure but it made me very anxious indeed to think of using that big Gambia River at night. We could have no patrolled area, no adequate lighting, no protection against either driftwood or native boats.

Had I been in a position to do so, I would have attempted to veto the operation. This being impossible, we had to make the best of it. Captain Vinal and I decided that we would go down the river first and if there were any obstructions we would take the brunt. Then if we got off safely, the President's plane would follow close behind us.

I stationed myself in the top of the wing at the navigator's astrodome for our takeoff, watching anxiously over the tail of our ship for the running  lights which would indicate that the following plane was safely in the air. My relief when I saw them was unlimited.

The rest of the trip home was uneventful, except that due to mechanical troubles, I had to leave one Boeing behind and pick up another in Natal (which confused the military accountants for some years thereafter). Preparing for the final day's flight from Trinidad to Miami, on the President's birthday, we got a nice birthday cake for him and dressed the aircraft with signal pennants which read "Happy Birthday, Chief.” 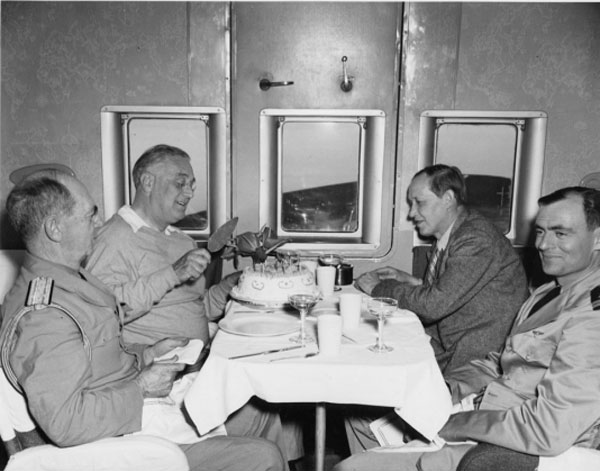 Before reaching Miami, I went topside and dressed in my Navy blues, with stiff white collar, black tie, and grey gloves, fancying, (correctly) this would be the appropriate thing to do at the end of such an historic journey. When I sought out my local superior, the Chief of Staff of the Naval District, to report in, he paid me a compliment which would only have significance to one who appreciated its meaning, He said "Welcome back. Commodore" -- the courtesy title for any officer in command of two or more vessels, however small  -- or however airborne.

I should add, to illustrate the remarkable informality of the voyage, that I personally typed the orders which put Captains Cone and Vinal on active duty (both Naval Reservists, as well as the orders which raised them one grade in rank, and the orders which returned them to inactive duty at the end of the trip -- all with my signature over that delightful Navy phrase "By direction." Nobody ever questioned my actions, nor should they have.

You can read this story and much more in Aviation's Quiet Pioneer: Pan American Flying Boats by Peter Leslie 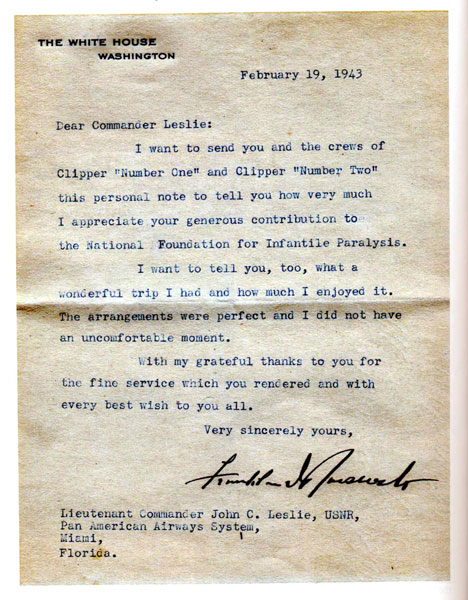