The first to be built was Dinner Key, in Miami's Coral Gables section, in 1934. The second was at Treasure Island, in San Francisco Bay, completed in 1939. The last was the Marine Air Terminal (the "MAT"), at LaGuardia Airport, which opened in 1940. All three are representative of the classic elegance of the Art Deco period, all still stand today, but only the Marine Air Terminal is still functioning in its original intended use as an air transportation terminal, and it maintains much of its original detail, which you can see today. 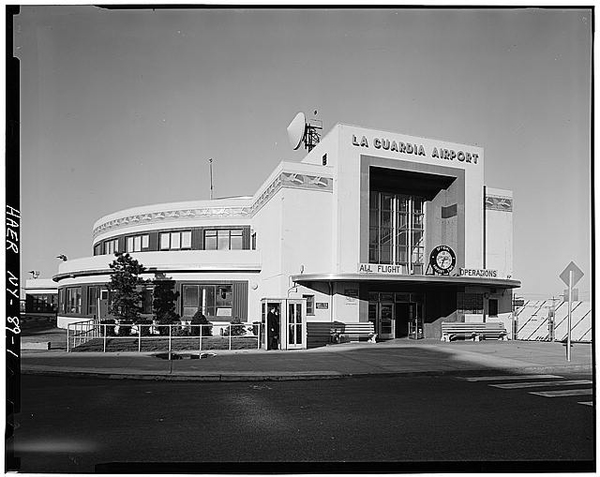 The Marine Air Terminal is a fascinating place for a visit. Inside, there is a grand round lobby, which still displays the heroically-scaled 1940 mural by James Brooks, entitled "Flight", depicting the progress of humanity's journey skyward, and additional new exhibits highlight the building's illustrious past.

The MAT was designed to be the jumping off place for the long over-water flights across the Atlantic during the age of the flying boats. Travelers embarked and disembarked at a dock just behind the building. Ambitious plans for LaGuardia originally called for sharing the facility with foreign-flag carriers, as reported in the New York Times shortly before America entered World War II.

Designed as an international port, LaGuardia Field became one in fact March 31, 1940 when Pan American Airways' Yankee Clipper surged off the murky waters of Rikers Island Channel on the first scheduled flight from the field to Lisbon, Portugal. The seaplane terminal originally planned for occupation by Air France, British Overseas Airways, Deutsche Lufthansa and possibly other foreign airlines, is now completely occupied by Pan American since wartime restrictions ended - at least temporarily- the dreams of foreign airmen for regular transatlantic schedules.

Pan Am started transatlantic service in May of 1939, about 100 days before Hitler's invasion of Poland. First flying from Port Washington on Long Island while the new terminal at LaGuardia was being built, the big clippers flew a northern route via Newfoundland and Foynes, Ireland to Southampton in England; a southern route went via Horta in the Azores to Lisbon, Portugal; Marseilles in France, and thence to Southampton. War's outbreak in Europe suddenly restricted the transatlantic routes to terminals in neutral Ireland and Portugal - but made the air transport connection absolutely critical. With international tensions rising, the MAT was often the focus of national attention, as VIP's shuttled back and forth across the Atlantic. Passengers included international notables, high-ranking civil servants, and business people on critical missions, but as war clouds spread, there were occasional hints that others were using the new air service, such as Colonel "Wild Bill" Donovan who would become the first chief of the OSS - the forerunner to the CIA. On Dec. 7, 1940 headlines in the New York Times reported:

Col Donovan Flies Over Atlantic on Secret Mission Tied to France
Departs Incognito on Clipper with Two Others, One a Frenchman - Reported to be Bound for Africa, Greece, and Spain

And a clipper had arrived at the MAT carrying a much greater secret that August, when British scientist Henry Tizard flew to the US in advance of a mission that would share a trunk full of British scientific breakthroughs that included the resonant cavity magnetron - the key to modern radar, one of the most important weapons developed during WWII. After December 7, 1941, Pan American was immediately enlisted for national defense - for the moment, the airline's fleet of ocean-spanning flying boats, and superbly trained crews were America's only reliable intercontinental air link. Pan Am's President Juan Trippe immediately offered total cooperation for national defense, and the MAT became an integral part of the expanding war effort. The luxurious Boeing-314's were joined by less glamorous military seaplanes such as the Martin PBM "Mariner" and Consolidated PB2Y "Coronado" many of which were manned by Pan Am crews flying in US Navy uniforms - for the airline had been "drafted" by the US Navy. The story of Pan Am's contributions to Allied victory is worthy of much more space than is available here.

With war's end, the Marine Air Terminal's days as a seaplane terminal quickly faded as a new generation of long-range land planes like the DC-4 and Lockheed Constellation superceded flying boats. By 1946, Pan Am's "boats" had flown their last transoceanic missions. A Pan Am Constellation, christened the "Clipper America" inaugurated the airline's round-the-world service from LaGuardia in June of 1947, not long before New York City opened a new international airport at Idlewild on Jamaica Bay (known today as JFK) to accommodate larger aircraft and a booming international travel market. By then, the MAT seemed like a white elephant. In the 1950's the huge 240 ft. mural was painted over - a possible victim of unfavorable scrutiny in a political climate sensitive to public art depicting scenes of heroic social progress.

But the Marine Air Terminal was destined for better things. The MAT's location made it a good site for shuttle flight operations - first by Pan American, and later by Delta Airlines, and in 1980, the mural was painstakingly restored by the New York Port Authority. The historic value of the building was recognized and the National Park Service added it to the National Registry of Historic Places  in 1982. Today the MAT's mission has changed but it is still serves as a unique working reminder of a grand vision of air travel from a different time. Don't miss out on a visit.

Slides: Panels from Pan Am Banner exhibit at the MAT