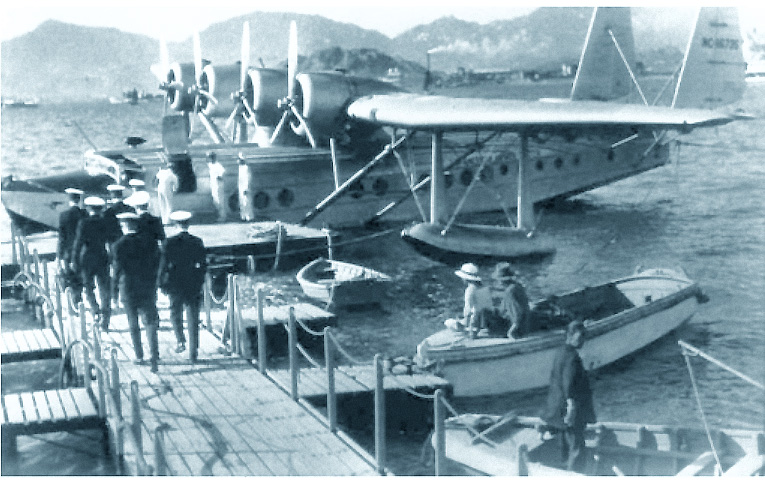 It was a pitch black Monday morning in December when Pan American Capt. Fred S. Ralph got word that the “Hong Kong Clipper,” which he had piloted from Manila the day before, was scheduled for an extra-early return trip takeoff from Hong Kong’s Kai-tek airport.  Capt. Ralph and his six-man crew* hurried to Pan American’s Clipper base at the airport, had about readied the ship for departure when they learned — at 7:10 a.m. — that the flight would be delayed.

Five minutes later, Capt. Ralph heard that Japan had declared war on Great Britiain, instantly directed his men to remove their belongings from the Clpper. They were just finishing this task when the Japanese bombers appeared, pounded the Kai-tek airport with bomb after bomb, crippled several CNAC (Pan Am subsidiary, China National Aviation Corporation) planes standing on the field, dug huge holes in the runway, shattered the roof of the hangar.

So suddenly did the bombers appear that Capt. Ralph’s men scarcely had time to gain the comparative safety of Pan American’s dockhouse.  Last to leave the Clipper, Capt. Ralph leaped from the dock into three feet of water, found cover behind a large concrete post.

Back came the Japanese, this time with machine guns roaring. Swerving like angry hornets, they swooped to within 50 feet of the ground, made 6 dives directly at the Hong Kong Clipper. On the 7th dive, they scored with incendiary bullets. The flying ship burst into flames, burned to the water’s edge.

Up from his water bomb shelter Capt. Ralph, at once began to help organize one of the most remarkable evacuation feats in the history of aviation. That was the last the world heard of the Hong Kong Clipper’s crew for more than a month. Then January, 10, Capt. Ralph, his crew and 2 other Pan American personnel appeared in New York. Though they had flown by Clipper all the way to New York from an Indian Ocean seaport, they had not arrived on the Pacific Clipper whose 31,500-mile Round-the-World flight from San Francisco had ended at Pan American’s New York Marine Terminal only 4 days before. 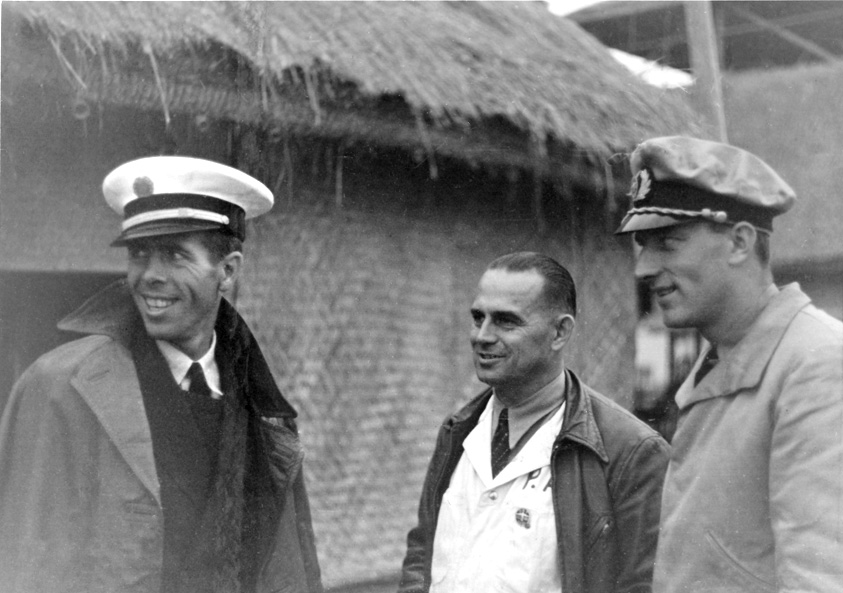 Beloved by many a Pan American pilot, the Sikosky S-42 which the Japanese destroyed at Hong Kong was the only Pan American Clipper casualty of the Pacific war. Seven weeks before, “Myrtle” had opened up a new Pan American weekly shuttle service bewteen Hong Kong and Manila and had been greeted with cheers by Hong Kong residents. Previously she had seen service on Pan American’s tranatlantic run between New York and Bermuda.  Re-equipped with long range fuel tanks and other operating equipment, “Myrtle” had slipped into her new Far East harness with her usual ease, had already completed 11 round trips between Hong Kong and Manila the day before she went down.