The very first Boeing B314 to see the light of day was NC 18601, later christened Pan Am's Honolulu Clipper. Thanks to the tenacity of a dedicated group of marine salvage experts, she may once again see the light. 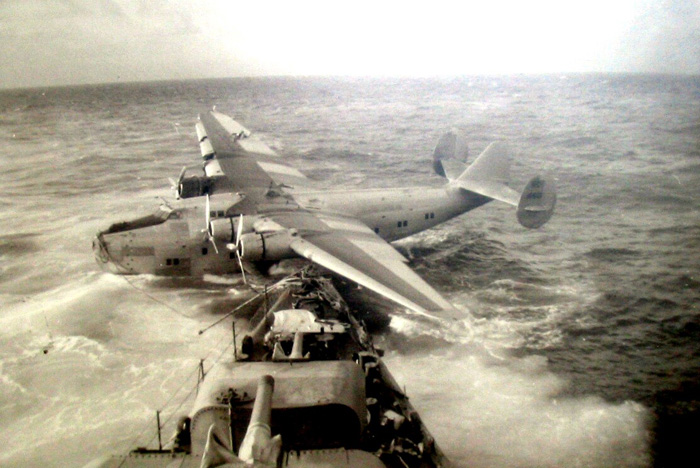 Mark R. Allen, President of Underwater Admiralty Services (UAS) of Kirkland, Washington, says the project to locate and survey the condition of the sunken Pan American Airways’ flying boat is still on track. The non-profit group has been pursuing the dream of recovering the Honolulu Clipper for over ten years, and now awaits a likely decision regarding underwriting of the initial phase from an interested party.

It was almost midnight several hundred miles east of Hawaii on the night of November 3rd, 1945 when Captain “Robbie” Robbins brought the big plane down to a masterful landing on a rough ocean surface.  With two engines out, and losing altitude despite dumping fuel and cargo, he had little choice. All aboard were safe, and the aircraft was in good shape. Another Pan Am B-314, the California Clipper, was also en route to San Francisco not far behind, and took up an orbiting station above her stricken sister ship to help guide rescue vessels to the scene. Help soon arrived and passengers and crew were transferred without incident..

Engine repair attempts failed. The plane was put in tow by the USS Manila Bay, a navy escort carrier, but the tow rope parted. The attempt to save the clipper dragged on with the arrival of the USS San Pablo, a navy seaplane tender. With seas running high, another attempt to tow the big flying boat was made, but this time, the effort to secure a tow line  resulted in damage to the plane when ship and plane collided.

It was now November 8th. Radioed instructions from the Navy Commandant in Hawaii sealed the fate of the Honolulu Clipper. She was now a hazard to navigation and after 30 minutes of target practice with 20mm cannon fire from the San Pablo standing a mile away, she sank to the abyssal plain of the Pacific three miles down. 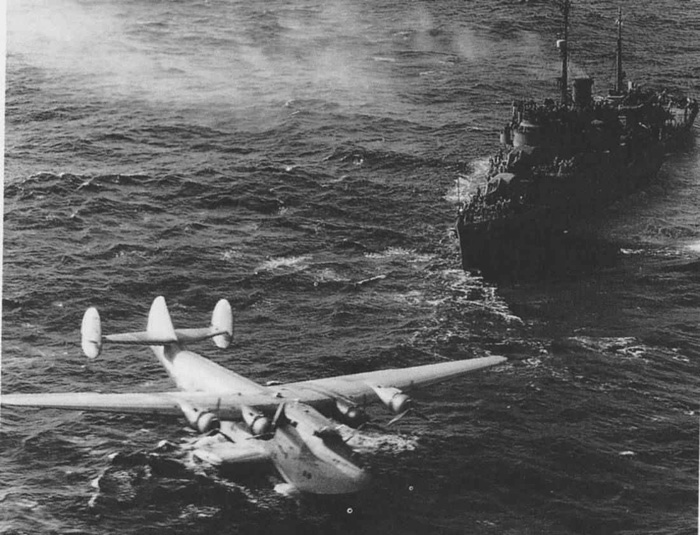 The UAS team are no strangers to the fascinating but very technically challenging job of recovering aircraft from underwater environments. They’ve successfully participated in the retrieval of a submerged B-17 Flying Fortress and an A-20 Havoc. The recovery of the Honolulu Clipper will be considerably more challenging.

In a telephone interview, Mark mentioned two favorable factors that will help the project. The first is that the technology available to those doing deep underwater recovery has been steadily evolving.  For example, it’s now possible to use 3-D imagery to document the aircraft for presentation and further evaluation of recovery options.  Most significantly, deep water remote sensing technology has greatly advanced in recent years with autonomous underwater vehicles (AUV’s), which greatly aid in the survey of the ocean’s bottom surface.

Another factor that favors the hunt for the Honolulu Clipper is the current availability of the specialized vessels used for deep water maritime work, due to the slowdown in the oil and gas industry. The old story of supply and demand has created an opportunity to lease these specialized vessels at a relative discount. Still, the estimated cost to pursue this first phase of the project to locate and survey the long lost clipper is likely in the two to five million dollar range, according to Mark.

Educated estimates suggest that the clipper likely took two to three hours to come to a relatively gentle landing three miles down on the bottom of the Pacific.  Although damaged during her final hours afloat, she is very likely to be mostly intact. Seven decades lying in the cold, dark and oxygen-poor depths may have been relatively kind to the Boeing’s aluminum structure too. One further factor favoring the hunt is that the sea bottom where she went down is relatively flat and free of underwater mountains and chasms that would hinder the search.

Finding and retrieving the iconic Honolulu Clipper won’t be easy, but it is within reach.