All the Way to Guam 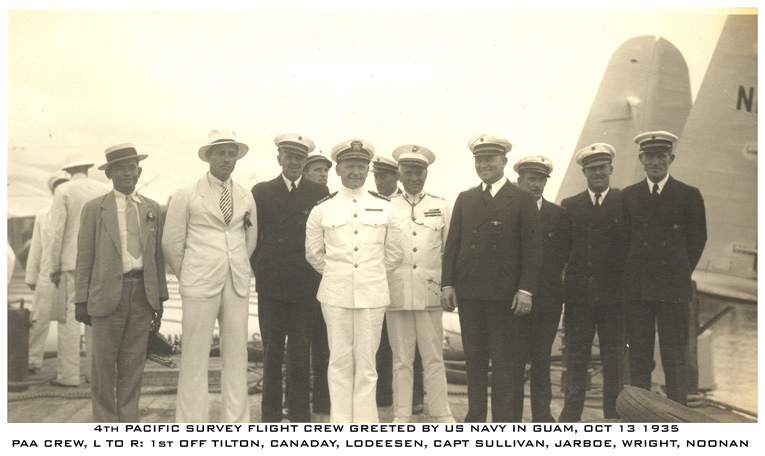 It had been six months since the stripped down S-42 NC823M, formerly the “West Indies Clipper” now renamed the “Pan American Clipper,” had first made the crossing from the California coast to Hawaii. That was the start of the stepping-stone conquest of the vast Pacific. In the following months, the flying boat, captained by Pan Am’s senior pilot Edwin Musick, lengthened the surveyed route by one more island in each subsequent flight. In turn, they reached Midway and Wake Islands. 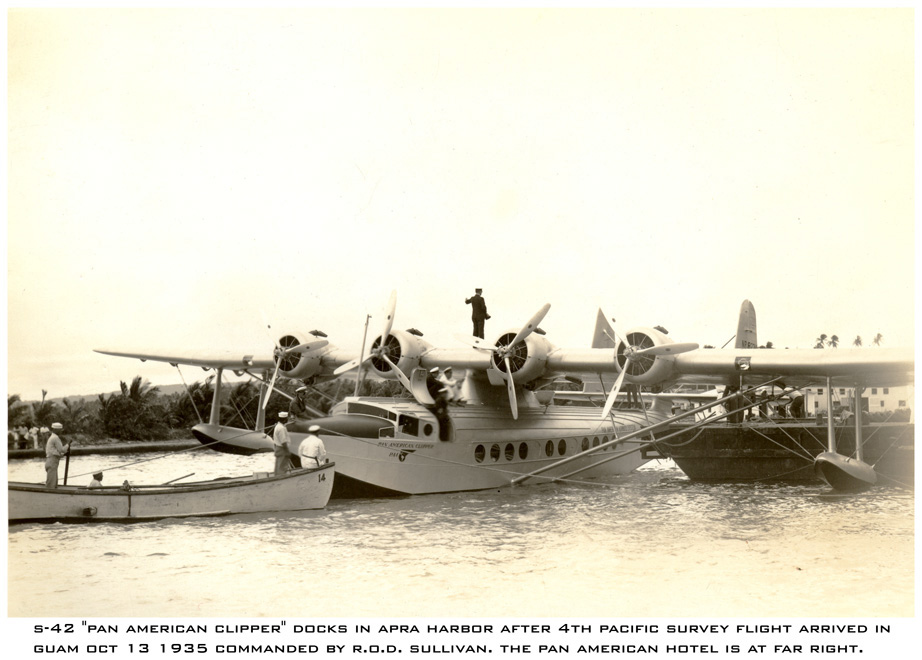 Now in October 1935 it was time to fly to Guam. Musick was back on the U.S. East Coast, managing the delivery and shake-down of the new Martin M-130 China Clipper. It was up to veteran pilot Rod Sullivan, who had commanded the previous trip to Wake to do it again on this penultimate Pacific pioneering flight. Young Marius Lodeesen, who would become one of Pan American’s illustrious flying boat captains himself before long, flew as the flight’s second officer. He managed to keep a diary during the 13,000-mile round-trip flight to Guam and back.

Most of his observations are about the flying, which provides a rare glimpse into a moment otherwise lost in time. There’s too much to include in total, but here’s a bit:

Soon out of Midway we passed through a heavy storm at 9,000 feet. We were really trying to get above all this muck but cannot climb fast enough. The plane rose and fell 2000 feet at a time. And talk about rain; you could not even see the wingtips. The cockpit of course leaked on all sides. The automatic pilot is doing its stuff. We are all rather sullen from lack of sleep and this does not improve our spirits very much. It is when we feel like this that we bolster up our spirits by cussing and crabbing about everything especially flying. It seems to relieve ones feelings and it is really perfectly harmless. Yet, to the outsider it appears that we are really through with flying and hate flying more that anything else. The radio operator  (W.T. Jarboe) grew quite sarcastic. He wanted to know why in heck he ever left the farm. What a soft job that used to be, only get up at five and work twelve hours a day. A pretty soft spot all right!

Vic (Wright), the engineer, agreed that the mere sight or the cockpit made him sick; he would gladly substitute the behind of a mule for a compass and a plow handle for throttle. Harry (Canaday) moaned about the hot bran muffins his wife used to serve for breakfast, in fact, every time thereafter when I mentioned of bran muffins his face would light up in a big smile. Well everything comes to an end and so it was with this storm. At 11,000 feet we were clear. The sun once more came out and all the rest of the way we hardly hit a bump.

They reached Guam on October 13th. Lodeesen evinced the sort of outgoing interest in the lives and cultures of other nations that would characterize Pan American Airways’ people throughout the decades: 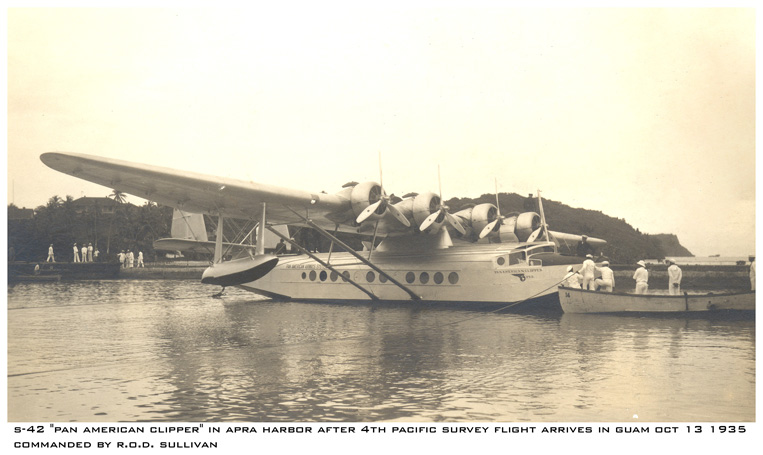 And then Guam! What a reception we had. The entire island had turned out to greet us. Guam is a closed port and outside of half a dozen or so Navy ships and a cable ship or two, no ship ever comes here. The native population is about 16,000 with 1,000 whites. The Governor is a Navy captain who has as his staff a colonel of the marines and about ten officers. Well, when we came in you could see every one of the 16,000 inhabitants dressed in their best bib and tucker lined up. As soon as we had docked we met the Governor, then the usual pictures and then we had to pass through a platoon or so of girl scouts who saluted and then pounced upon us and pinned little bouquets on our lapels.

Vic says that was the hardest part of the entire trip. People came up and shook our hands and smiled like we were the Pope himself. Finally we got away and to bed for some rest.

In the afternoon a formal reception at the Governor’s mansion where we met all the notables, were presented with a beautiful inlaid wood cribbage board. Among the guests I spotted two monks. I asked to be introduced and they proved to be Franciscan missionaries. One of them was a full-fledged Bishop. I invited them to visit the ship the next morning, which they accepted and in turn invited us for tea at the monastery in the afternoon. That evening we divided our attention between a dance given by the Elks and a party at the officer’s club given by the officers. Every one danced together; officers, enlisted men, natives and what not. Extremely interesting. The natives are very nice and well built and most of them handsome, especially the women. They made me think very much of the Dutch East Indies . . .  very polite and very much unspoiled. No tourist ever comes here. 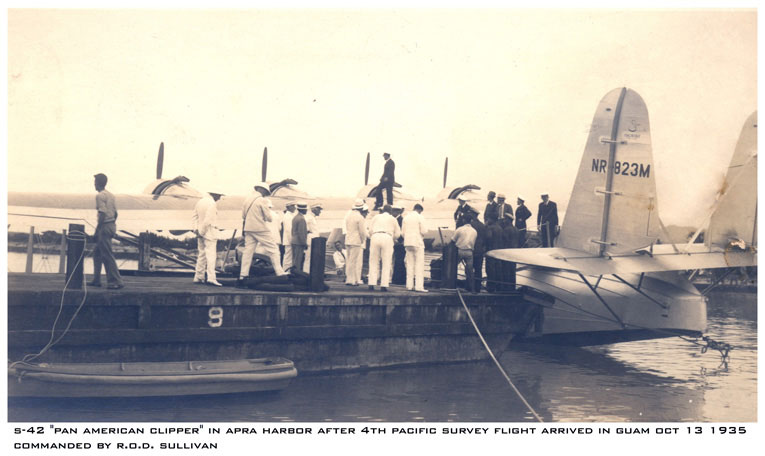 Soon it was time to climb back into their clipper and head east back whence they came. There were some unexpected mechanical delays on Midway, but before long they were in the air again, making for Alameda.

And early in the morning just before daybreak the sky turned just a little lighter. We were flying above a cloud layer, the sky above was perfectly clear. Slowly the sky turned fiery red in the east we were heading. The red spread over the entire Eastern sky gradually merging into blue and grey higher up. You have no idea how a sunrise looks above the clouds. Even weary as we were we all enjoyed this. - And finally land! The mountains of California. Strange how it seemed like we had been away for years, yet actually only 20 days. The best part of any trip is the arrival home. Blessed is man for his desire to go elsewhere when he is home and go home when he is abroad. And nobody who goes out on a long journey ever knows how good it feels to come home.