By Robert Pelley. Many thanks to the Gander Airport Historical Society http://ganderairporthistoricalsociety.org/ 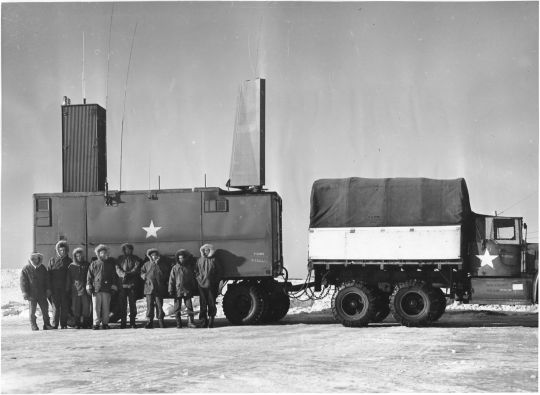 The photo shows the equipment with some of the original crew: Their names were John Jerome, James D Hillis, Ross Thomas, Joseph Green, Walter Haney, James O’Brien, Charles Aldrich and Myron Danforth. For historical reference, the back of the photo giving their home addresses is shown here: 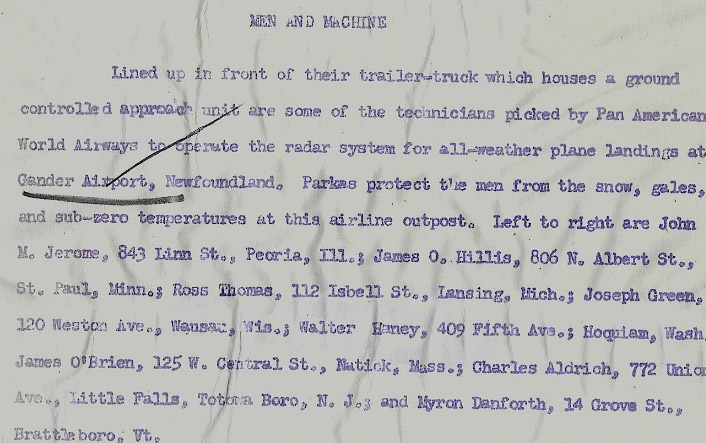 The next photo shows the GCA unit setup on the edge of the runway 09-27 that went past the American side out over Gander Lake. In the background can be seen the old terminal area (hangars 21 and 22). 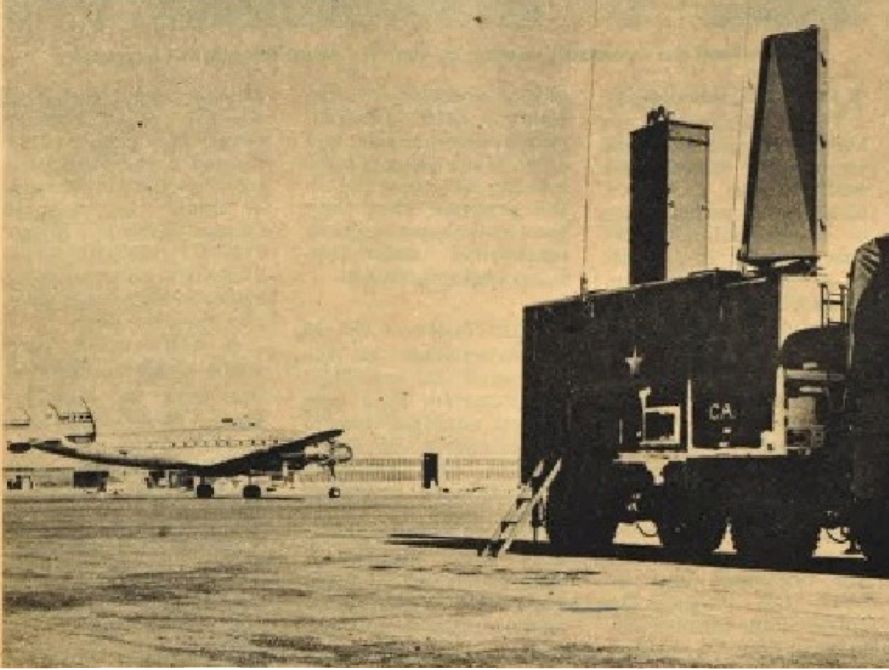 The truck was a 6x6 Diamond truck weighing 18,000 1bs, rated to carry 4 tons US or tow at least 5 1/2 tons. The usual load was two generators, tools, spares and air-conditioning unit to cool down the trailer (and crew!) in a hot vacuum-tube environment.

The trailer was a 5-ton, four dual-wheel unit with four hydraulic jacks to maintain the trailer in a required position for accurate plotting of the position of incoming aircraft.

The next shot shows the outside of the equipment. 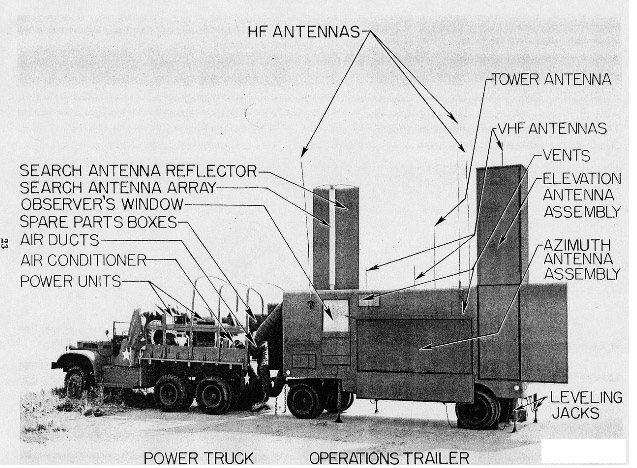 The trailer was placed roughly 100 feet to the right of the windward end of the active runway and could be moved as required. It was set at an angle (84 degrees) to compensate for the distance from the end of the runway and was lined up with radar reflectors.

Inside it was a very crowded unit in terms of communication equipment, radar and people. The photo below shows the set-up: 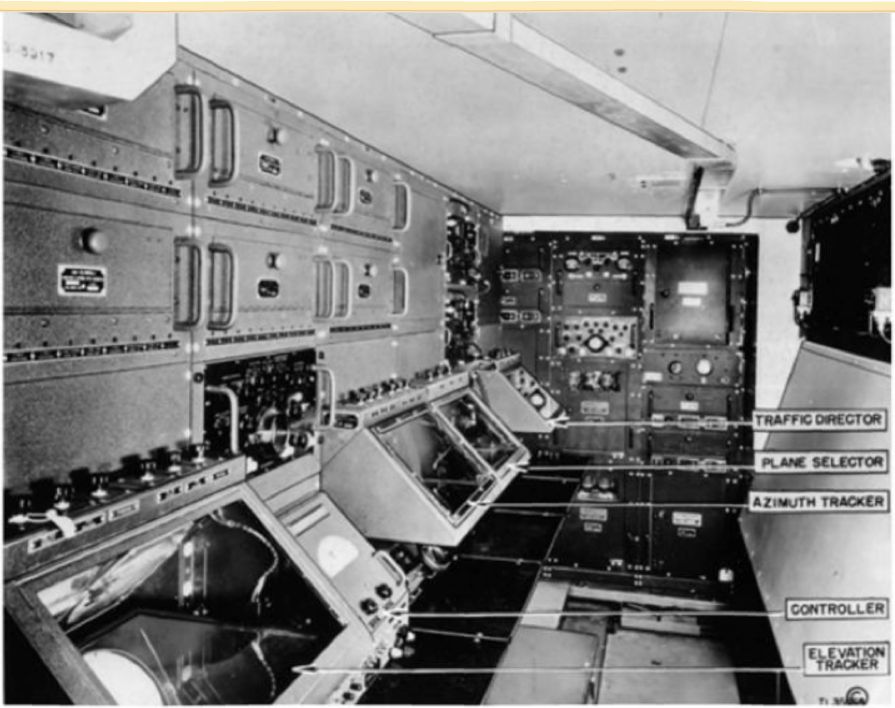 It took a highly trained and motivated crew to keep on doing this day after day. This is one reasons why there were among the highest paid workers in Gander at the time. In early 1947 the base monthly pay for operators was $290, plus $125 as station pay and another $150 as a monthly cost of living allowance. This works out to $130 a weekly. There is no information available on the average weekly wage in Gander at that time; however the weekly wage for men in manufacturing in all of Canada at that time was about $60, which less than half that of the GCA staff.

On 16 March 1952 the base salary, not including cost of living and station pay, was $466 for all crew members with a amount of $525 for the supervisor, very decent pay for the period. 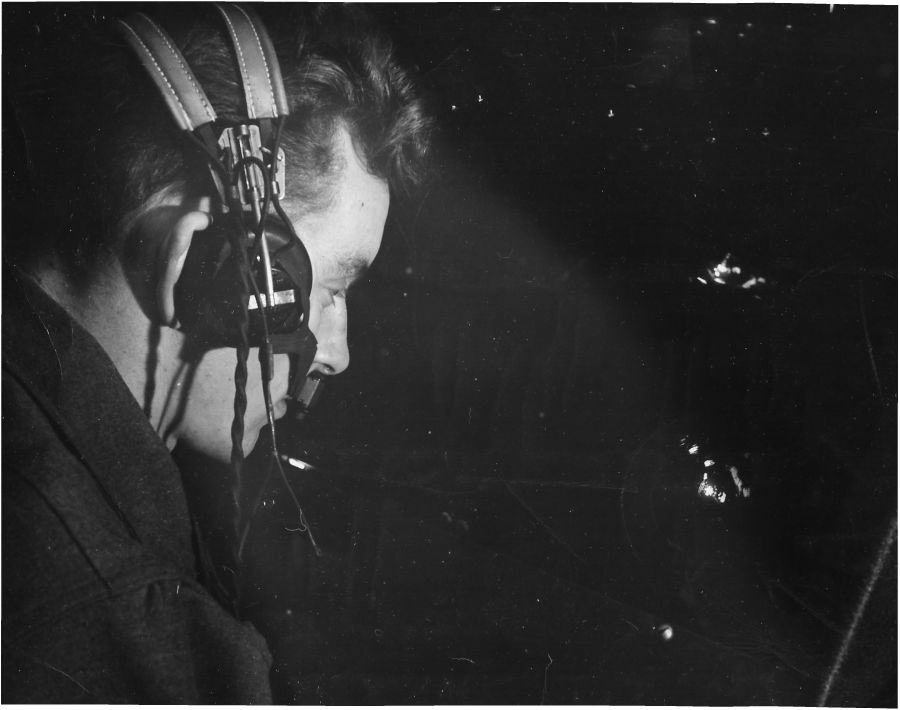 With microphone strapped to his mouth and eyes glued to the scope which "gives a radar picture” of the approaching plane Ross Thomas Lansing, Mich. directs a plane’s landing from the Pan American World Airways’ GCA unit at Gander Airport, Newfoundland. The brightest dot of light in the lower cluster is the moving plane; other lights are outlines of surrounding terrain. The upper spots of light are the actual images which are reflected to the lower location in order to be seen better by operators.

The next picture is from the Atlantic Guardian 1950: 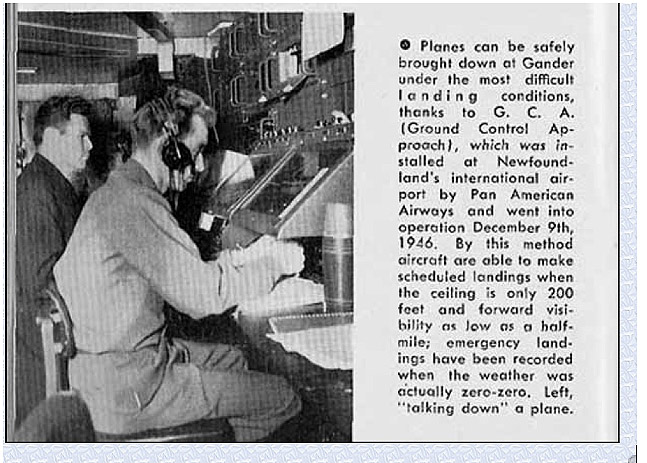 The next shows Chuck Aldrich: 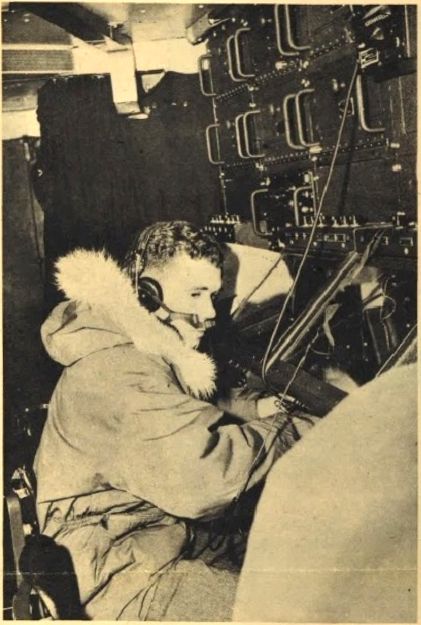 In the GCA trailer, incoming airplanes are generally managed by a team of three, namely two radar scope operators and a controller who does the talking to the pilot.. The airplane is first picked up on a 30- mile radar and may be asked to make a right hand turn or similar maneuver to make sure it is positively identified.

Another radar operator watches the airplane’s rate of descent with two PPI scopes (Planned Position Indicator), one with a 10-mile range, the other a three-mile range. Imagine two black dinner plates with a line cutting off the lower third of each. These are ground lines showing the actual ground level of the runway. Looking at these two “dinner plates” is exactly like looking out a window where you see the horizon and the sky.

This radar operator first notices a tiny blob of light, representing the airplane, on the 10-mile scope. As it moves within three miles of the airport, an equivalent moving blob of light appears on the three-mile disc, greatly enlarged. The operator constantly turns a crank to keep a hairline or “cursor” on the blob of light.

Prior to giving landing instructions to the pilot, a theoretical “glide path” was established that the airplane is supposed to follow to arrive safely at the right height and from the right direction over the end of the runway. The distance left-right and up-down between the glide path indicator and the cursor showing the airplane’s actual position shows up on an “error meter.”

This meter is directly in front of the final controller who can then “talk down” the aircraft.

As proof of their ability, GCA Gander had a 100% success rate. This equipment was also great for other uses as well. Half a dozen trailers went to Glenwood when GCA closed down. Apparently the trucks were worth keeping but the old trailers were not worth the cost of shipping by rail and boat to New York. These trailers however made great storage sheds!

In fact, one of these trailers is still being used - as a storage shed next to cabin on the NW Gander River. 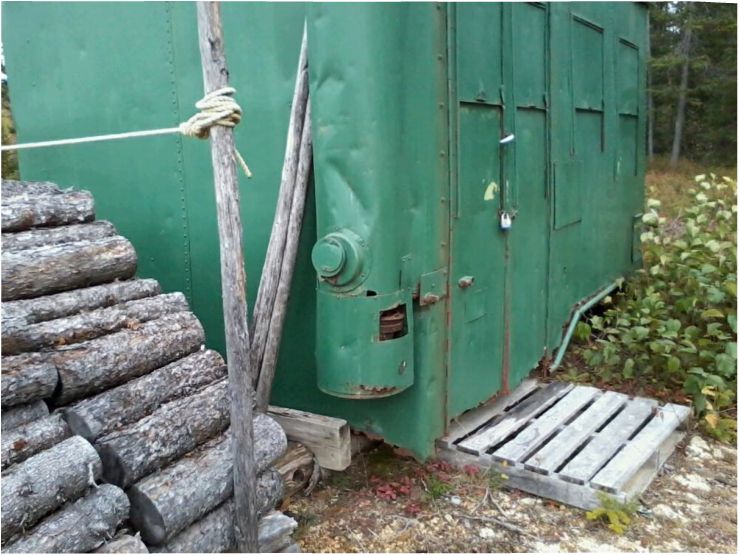 The success rate is still 100%. Since their arrival in the Glenwood - Appleton area over 50 years ago, there have been no known cases of a bear being able to get in!

(Very much thanks to Darrell Hillier (St.John’s), Harold Pelley (Glenwood) and Evan Steele (Appleton) for the information which enabled this version 2 of this GCA article.)

Return to Ground Controlled Approach in Gander: Part 1, A Very Serious Game of Hide and Seek

Mr. Pelley is now working on a longer article on Pan Am’s history in Gander. His website http://bobsganderhistory.com/ provides a superlative source of information on the birth of trans-Atlantic civilian air travel and ferry and anti-sub operations in the North Atlantic during World War II, as well as the fascinating subject of “Old” Gander in general.