Mr. Herbert Piontkowski, Pan American Airways’ Inter-German Service (IGS) 10,000,000th passenger, threaded Berlin press and dignitaries to pose with Captain William H. “Bill” Seeman for pictures before boarding the Frankfurt-bound Boeing 727. Piontkowski, the day’s celebrity, would not have known that his pilot was a celebrity too … albeit with a limited fan base. Unlike Pan Am pilots Ed Musick and Bob Ford, Captain Seeman never graced Time magazine’s cover -- although he held a copy of Time in a German magazine advertisement. Bill Seeman and Mad magazine were a better match. 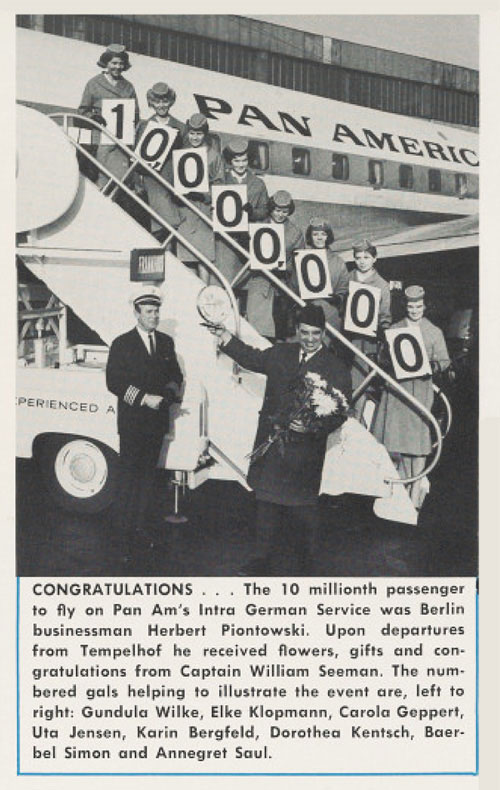 Captain Seeman’s licenses, certificates, vaccines, and visas cleared him to fly globally; still, most colleagues (especially those based in Europe) knew Bill as a “what’s coming next” humorist who lampooned corporate boondoggles and flight-crew dynamics … but with a light touch. His wife, Heide, says that “Bill delighted in the absurd moments of life,” and like his hero, Mad magazine cartoonist Don Martin, Bill applied ink to paper with precision. Eviscerating, while hilarious, his cartoons skewered piloting as a profession and aviation as an industry, particularly male preening, pilot culture, international aviation policy, and Cold War geopolitics.

Born February 19, 1921 to a well-heeled North Carolina family and fascinated by flight, when he could bike to town unsupervised, Bill headed to the airfield fence. “Finally,” said Heide, “a local aviator asked why he was there, and Bill replied, `I want to fly’.” The cash-strapped aviator offered lessons for a penny a pound, a bargain, because, attests Heide, twelve-year-old Bill Seeman was “scrawny.” 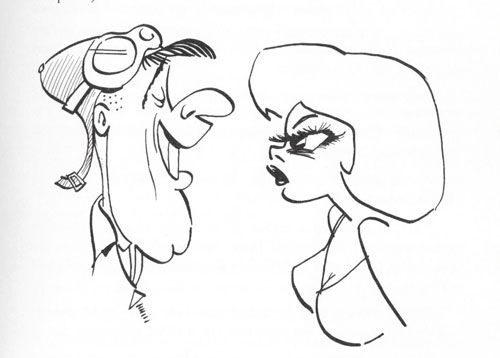 One day, Bill’s instructor executed an unannounced landing, exited the aircraft and said, “Go cruise around for a while.” The unplanned solo, which abetted a hayloft tryst, became a recurrent cartoon motif for Bill with wasp-waisted flight attendants and port-of-call beauties bearing the brunt of randy fly-boy attention.

Bill graduated University of North Carolina (May 1942) with an unusual resume -- engineering student and Editor, Tar and Feathered, UNC’s humor magazine -- a foretaste of Bill’s off-kilter avocations. With the United States military draft underway, Bill did not want others to control his fate, so he leveraged rare credentials (college graduate, engineer, instructor-rated private pilot with advanced certified flight hours) and applied to Pan Am.

The company was hiring, replacing pilots recalled to active-duty, assigned to teach over-water navigation, provide final check flights to waves of newly minted aviators, and to meet war-time commercial (and secret) contracts. Just out of his teens, Bill Seeman differed markedly from the minimum standards for pilots Chief Engineer, Andre Priester, had set in 1927. 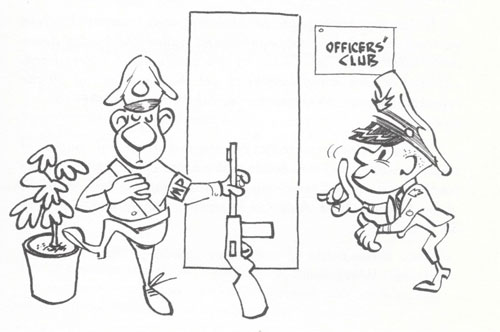 Bill amassed cartoon fodder during World War II flying with senior PAA pilots. Knowing his unique situation, Bill recorded that time on paper. One sketch illustrates a tongue-in-cheek (but too real) aside about World War II military aviation: “Who does not remember the signs posted around officers’ clubs refusing admission to Lieutenant Colonels under the age of twenty-one not accompanied by their parents?”

Bill flew from Hong Kong for three years after the war, followed by a San Francisco multi-year stint, before shifting to Germany in 1957-58.

IGS colleague, Captain John Marshall, confirmed Bill’s comedic sensibility and artistic touch. “Bill was a quiet man who was never in the Berlin community social scene.” Still, he was observant. “Bill rarely voiced an opinion during the incessant `what is the company thinking’ conversations that pervaded crew lounges throughout Europe, including Berlin’s Templehof Airport Officers’ Lounge, and that also helped to pass hours in cockpits.” Yet, “he always listened. And, a day or two later, an unsigned cartoon would appear on the lounge corkboard,” and someone at the bar would announce a rib-tickler to check en route to their next flight. “We prayed for another of Bill’s cartoons.” 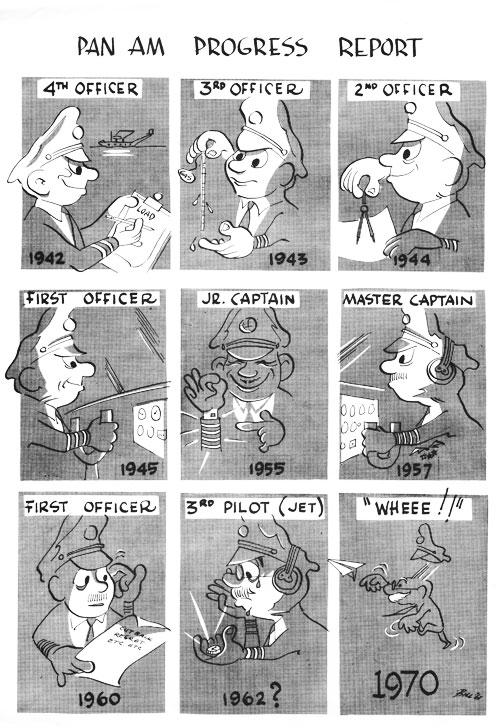 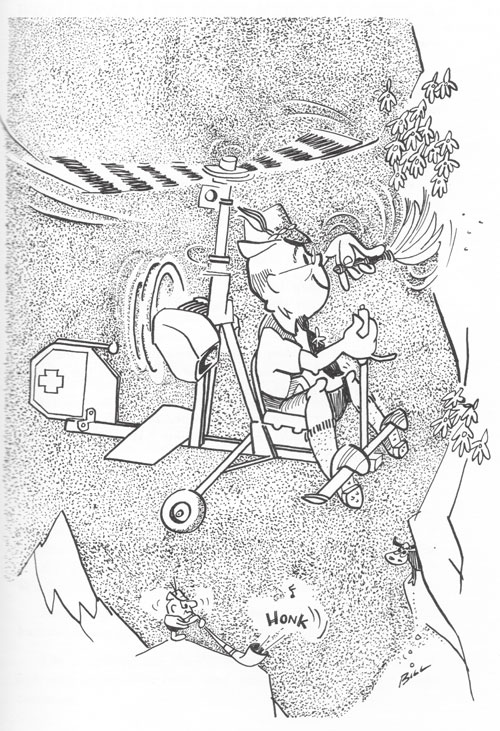 After Bill’s cartoons (unsigned) appeared at Templehof Airport’s Crew Lounge, the anonymous cartoonist’s identity soon was an open secret in Berlin’s close-knit aviation community … although not universally. Heide remembers how one indignant, thin-skinned Pan Am Captain, who believed (correctly) that he was the butt of several cartoons’ barbs, created system-wide hilarity when he pinned a note to one cartoon stating, “Identify Yourself!!!” Bill had his colleagues’ attention.

After begging and cajoling, Flight Engineer, Keith “Woody” Woodmansee convinced Bill to join a tongue-in-cheek cockpit review of aviation history. And, as reported in The Clipper (Aug. 15, 1965, p.4), Woodmansee wrote A Shot History of Aviation (Aero Publishers, Inc., 1964) because, "I needed an outlet...maintenance log sheets did not allow enough scope for my imagination." He claimed that Bill participated via blackmail: "one morning while taxiing out of Templehof I refused to tell him how much gas, oil and coffee we had on board until he agreed to do so." Bill drew 40 images (from sidebar sketches to detailed, narratively complex cartoons) to further Woody’s take on aviation and its foibles and A Shot History of Aviation became a PAA cult classic.  Colleague John Marshall treasures his copy and aviation legend Chuck Yeager had a copy too.

Pan Am pilots delighted when, starting September 1965, Bill contributed to Pan Am Pilots System Public Affairs Committee’s publication, Public Affairs Report. Editor, Jim Nelson, announced that Bill’s “delightful and pointed cartoons … help give meaning to our contention that Pan Am and U.S. airlines in general are suffering from an overdose of governmental regulations and a lack of government support. These cartoons are greatly appreciated and we hope that we shall see a lot more of them.” “Bill drew on anything: napkins, flight plans, receipts. And I soon learned,” said Heide, “that when he came home not to throw away anything.” Bill would pull napkins and other paper scraps -- including flight plans – covered with ideas for another cartoon from his uniform’s many pockets. Each scrap was sacred.

Paper piles mounded, and Bill sifted the one-off ideas, hastily-drawn lines, and other mnemonics when he was home. Although most fragments were trashed, snippets morphed into more developed sketches before Bill inked a final version.[2] While colleagues valued Bill’s talent, his two daughters appreciated dad’s ability but didn’t think it unusual, because, said Heide, “Rembrandt’s family was the same way!” Still, both commissioned Bill to design their wedding announcements and thank-you cards. Likewise, friends anticipated getting a Seeman-family Christmas card which Bill and Heide planned over months of test sketches that refined their take on the year past. That 1976 stateside resettlement was timely because within a year a heart attack forced Bill into early retirement and shifted him from cockpit to fishing boat. Even while salmon fishing, hiking, and bird watching, Bill doodled. A 1988 stroke reduced Bill’s mobility and his hobbies. Still he drew, although his draftsmanship suffered. Thankfully the Christmas project continued, as did Bill’s self-deprecating “signature” – a cartoon portrait of a balding, spectacled Bill drawing on a clipboard in his lap.

[1] Don Martin’s influence on Bill’s cartooning is obvious in the flexed “hinged” feet and knobby knees of his Swiss “crop duster.”

A review of the Woodmansee & Seeman book: