A Life Commemorated - in Detail 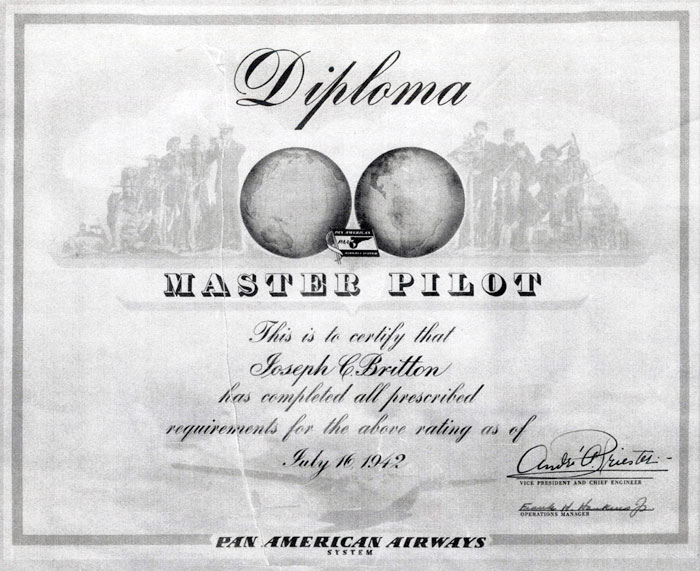 Recently John C. Britton and his sister Jean C. Britton Glenn, the children of Pan American pilot Joe Britton wrote a wonderful biography of their late father, filled with photos and a recap of Joe's work with Pan Am. The details they shared are compelling.

Joe Britton had a remarkable and noteworthy career that spanned almost all of Pan Am’s pioneering over routes far and wide for almost two decades, through peace and war and back again. He passed away at a time when his children were still young, and could have kept flying into the Jet Age if fate hadn’t suddenly intervened.  He left behind his log books, some photos, and a legacy.

That history impelled his son John to embark on a remarkable project as a way of remembering and honoring his father, by recreating in model form as many of the numerous aircraft Joe flew as possible. John meticulously provides every model he creates with a registration number of an aircraft his dad actually flew.

A Tribute in Photos:

View John’s models closeup in this slideshow. John shared that he still has a few other aircraft to add to his model fleet!

Joe C. Britton, our father, was born in the Enid, Oklahoma area, on March 19, 1907. He  grew up in Enid, attending Phillips University. He was fortunate enough to be in the forefront of  the early development of commercial flying, the development of navigation and communication  practices, and the evolution of Pan American aircraft, from the single-engined Fairchilds to the  Boeing Stratocruiser. This was the period of “the Romance of Flying”, when every flight was an  adventure. I feel sure he would have made the change-over to the jets, in time. 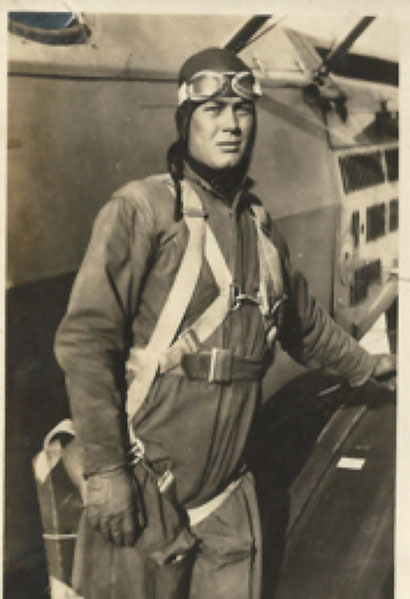 Joe Britton  in the US Army Air Corps

Daddy attended Air Corps Primary Flying School at March Field, Riverside, CA, graduating on June 21, 1930, with subsequent training at Kelly Field, TX, Ft. Sill, OK, and Mather Field, CA. According to his military flight  logs, he was on active duty until October 1931, when he was mustered  out of the service due to the Depression.

His civilian log shows a few flights  in the Enid area in 1931 and 1932. There was another stint of military  training in the summer of 1935. He returned to teaching at that time, per  an interview with him published in the Enid, OK, Morning News,  November 9, 1952.

We do not know what drew our father to Pan American Airways  in lieu of any of the other start-up airlines of the time. He clearly was not  in the first echelons of personnel who got their names in all the books,  but joined shortly thereafter, as the airline expanded rapidly. I am sure his experiences mirrored those of many other aircrew personnel at the time. 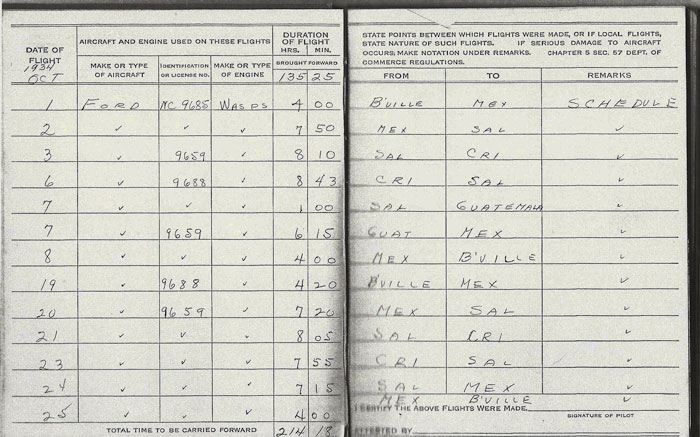 The first PAA log entry was a blind flying training flight in a Fairchild, on August 13, 1934, from Brownsville, TX. He graduated to Ford Tri-Motors on the route Brownsville to Cristobal, Canal Zone, and return. By November, 1934, he was flying Douglas DC-2s on that route and beyond, alternating with the Fords, and much training in Fairchilds.

As a sign of things to come, our father’s flights in a Consolidated Commodore flying boat began in Miami on October 16, 1936, with the first flight in the Sikorsky S-42, to Barranquilla, Colombia, on October 31, 1936.

He transferred to  California and began regular service as Junior Flight Officer with the  Martin M-130s on December 14, 1936. We have his certificates  (Domain of Phoebus Apollo) for crossing the International dateline for  the first time on the Philippine Clipper in December 17/18, 1936. This  service continued through March, 1938, with additional ratings to First  Officer, Navigator, and co-pilot training. 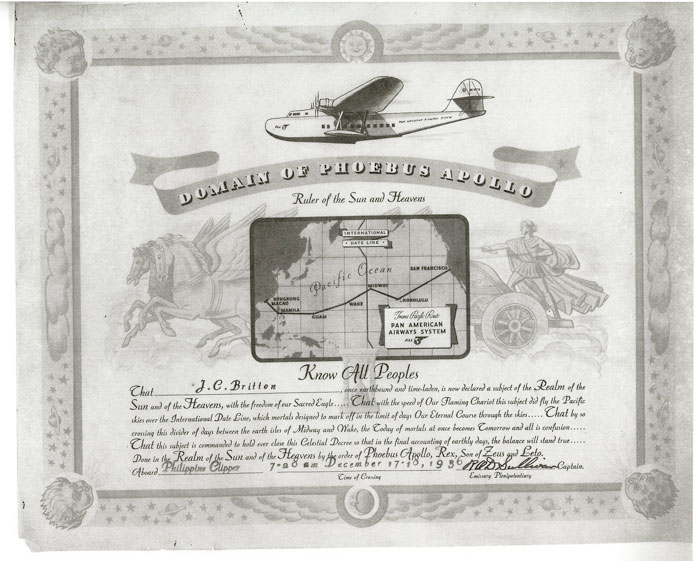 Capt. ROD Sullivan signed Joe’s Phoebus Apollo certificate on December 17th, 1936 – an auspicious date for an aviator, being the 33rd anniversary of the Wright Brothers’ flight at Kitty Hawk!

In May, 1938, he transferred back to Miami for training in the  smaller twin-engine Sikorskys (S-38, S-43), beginning Caribbean service in July of that year. Additional flights were made on the S-42s and Commodores,  and in December 1938, the older Sikorsky S-40s. 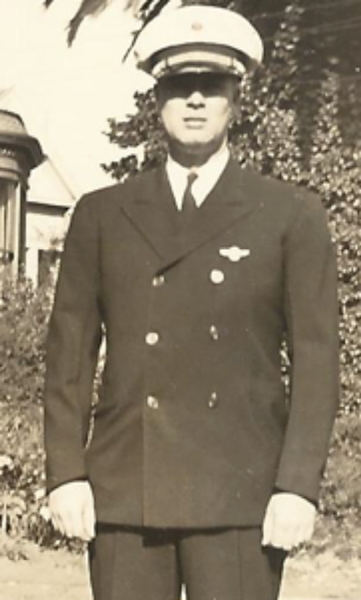 In July, 1939, he was moved back to Brownsville, returning to the Mexico-Central America routes on DC-2s, DC-3s and Fords. At one point on this run, he was “mentioned in dispatches” by Ernie Pyle, as reported in the St Petersburg Fla, Times, Feb 5, 1940.

In the article, Ernie wrote in part:

“When we piled out at the airport, we saw a short, young man In a uniform ccmlng to meet us, and we recognised him. I think maybe that is the greatest fun In all our traveling — running onto people you've met before. This young man was Joe Escalante, a flying steward of Pan American. We had flown with him more than a year ago along the north coast of Colombia We remembered each other well.

While we were checking our tickets, here came another man In uniform - a tall, handsome man, and we knew him too. We had flown two whole days with him on the Clippers, from Rio clear up to Para, at the mouth of the Amazon.

He was co-plloting when we rode with him last, but today he was captain of the ship, Capt. Joe Britton. I don't know what could make a flight over faraway foreign countries happier than to have a captain and a steward that you know.”

We have a copy of Daddy’s Master Pilot Diploma, and his wings, dated July 16, 1942. He also stated in the Enid newspaper interview that he flew Clark Gable from Mexico to Panama. This service continued through the outbreak of World War II until March, 1943. In April, 1943, he transitioned to the Boeing 307 Stratoliner, staying in Latin America, and serving the war effort. 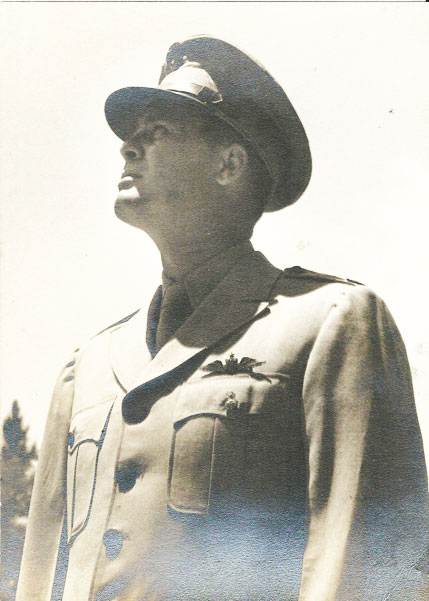 PAA Africa-Orient Division was begun on November 10, 1942. With Pan Am’s war effort gearing up, he returned to Miami in October, 1943, and  married our mother, Clara Koehler Steele in November. He then transitioned to C-54s and C-87s for the transatlantic  routes with the Africa Orient division. His first Ocean  Command was on board a C-87 from Natal, Brazil, to Accra,  Ghana on December 9, 1943.

Per the logs, Daddy flew this area (Miami to points in  Africa, as far as Karachi, India) from November 25, 1943,  through the end of May, 1944, flying supplies over, and  wounded back. A log entry for December 11, 1944, notes  the birth of my sister Jean. The remainder of the war saw  trans-Atlantic and other flights, including a civilian survey  flight from La Guardia in New York to Leopoldville, Belgian Congo, in October, 1945. We have  a Pan American photo noting “In 9 days, flew 114 hours, 22,800 miles”.

Joe, standing, fourth from left, before departing for the survey to Africa

February, 1946, he began the transition to the Lockheed L-049 Constellation, which he flew in alternation with the DC-4s. The first non-stop flight New York to London was noted in the log for May 12-13, 1947. He flew a charter flight from Damascus to Dhahran, Saudi Arabia, in October, 1947.

Transition to the L-749 Constellation began in October, 1947. The transatlantic runs continued through June, 1948, with continuation trips on to the Middle East and India in both Constellation variants.

A transfer to San Francisco in July, 1948, heralded his return to the Pacific routes in September of that year in DC-4s, flying the inaugural flight from Honolulu to Portland, OR, on November 28, 1948, and continuing through February, 1949. My birth log entry came that month. 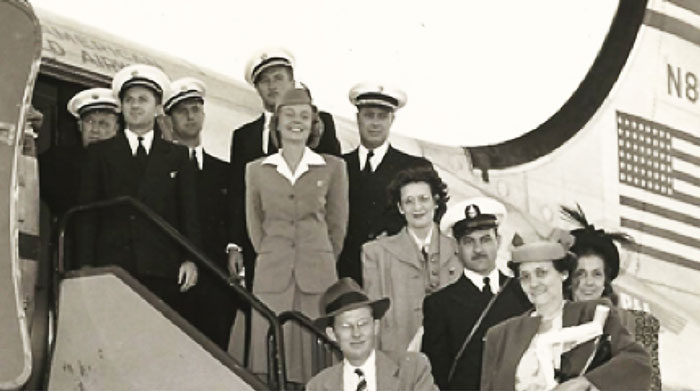 Crew and passengers of the inaugural flight of PAA, Honolulu to Seattle, arrived November 2, 1948. Joe Britton behind stewardess, to her left.

In March and April, 1949, Daddy began training in the new larger Boeing 377, with the first flight from San Francisco on April 29. First solo revenue flight was between San Francisco and Los Angeles on May 19, 1949. The log is littered with notes of mechanical troubles. His flights from the west coast to Honolulu began in June of that year, and in February, 1950, flying the Pacific check trips using the old China Clipper route. All was not dreary work. There  was time for recreation in route,  exploring the debris of war. Here,  personnel examine the wreck of a  Japanese seaplane, also on Wake  Island. 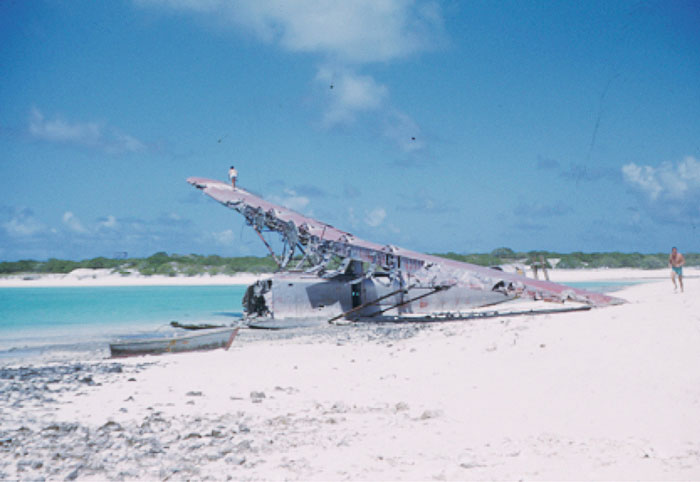 Routine flights continued until  May 4, 1952, and ended with the log  entry “became ill in HNL”, with a carotid  artery thrombosis, a stroke-type event, which effectively ended his flying career. Remaining B-377 flights were all in the San Francisco area, trying to get back into the game, ending in May, 1953. He had amassed a total of 13,946.31 hours. We eventually relocated to Houston, where our father returned to teaching.

He kept up contacts with PAA and personnel. He died of a heart attack on November 1, 1958, while in Herman Hospital in Houston during a recertification physical.

*All images are courtesy of John C. Britton and Jean Britton Glenn, unless otherwise noted.