PAA’s Man for All Seasons 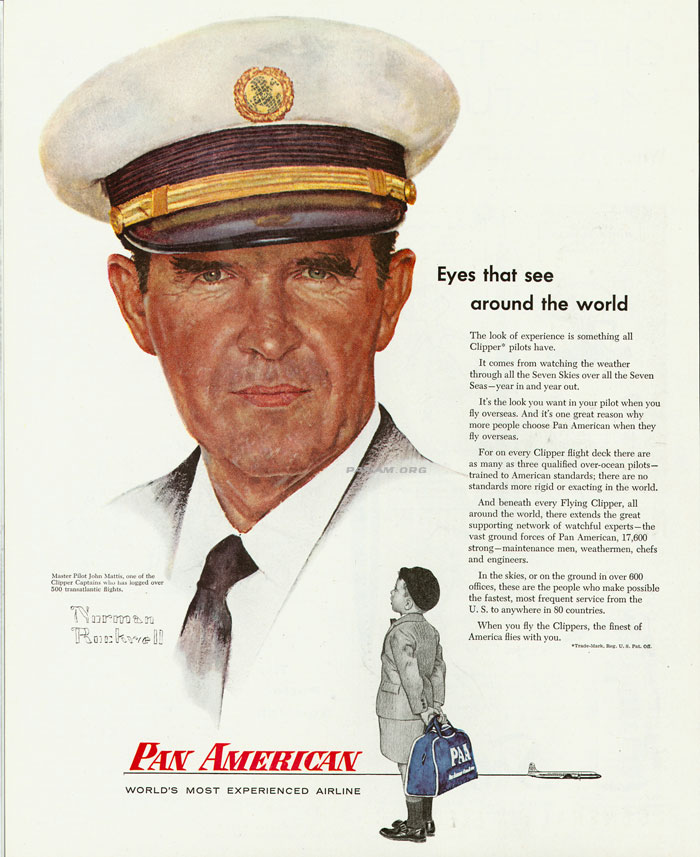 “Eyes That See Around the World” Ad: With Norman Rockwell’s illustration of Jack Mattis, 1956  (PAHF Collection)

If you delve into the lives of people who made a career in Aviation, you often discover an uncommon diversity of interests, experience, and talents.

That’s certainly true of John M. “Jack” Mattis, who flew for Pan American and associated airlines for over thirty years, beginning in 1932. For a time in the mid-1950s, Jack’s face was literally the “face” of Pan Am. His portrait by artist Norman Rockwell was featured in a popular magazine ad in 1956, but Mattis was not just the subject of others’ creative efforts – he had abilities of his own that he developed to an impressive degree. His work as a sculptor was exhibited at the Palace of Fine Arts in Paris, and a bronze frieze he created was long a permanently-exhibited fixture at New York’s John F. Kennedy International Airport.

He was born in Topeka Kansas in 1908, but his family relocated to Southern California when he was young. By 1929 he had graduated from the University of Southern California with an engineering degree. But Jack had aviation on his mind and he chanced on a way to pursue it in Mexico. He was hired to help prepare a series of aeronautical maps for the Mexican government. It was a short commitment, but it proved to be a harbinger of things to come.

Back in the US, Jack applied for and was accepted to the US Naval Reserve Aviation training program. First in Seattle, and then at Pensacola, he learned to fly, finishing as an ensign upon graduation in May 1930. After his obligatory year on active duty with the Navy, he was set loose to find his way in the world. The Great Depression was now on, and the Navy wanted to run a lean operation. You needed some luck to connect with any long-term job in aviation in 1931. 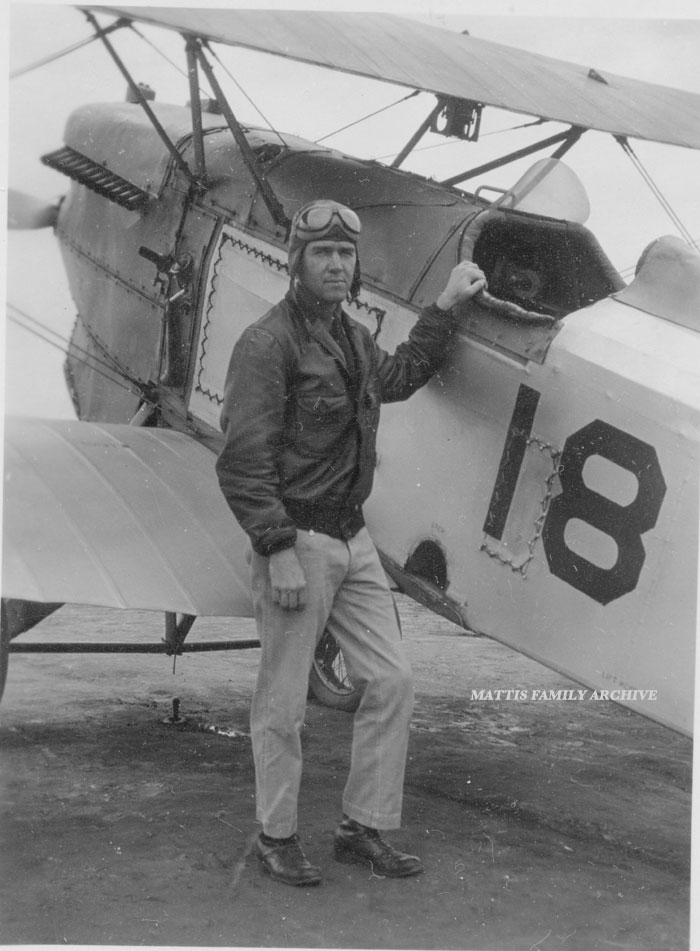 Jack did find a job though – back in Mexico -- flying for a little airline operating routes in Northern Mexico. And his luck stayed with him because, although the company failed when its founder was lost in a crash, the line was bought up by Pan American and renamed the operation Aerovías Centrales, integrating it into another Pan Am subsidiary, Compañía Mexicana de Aviación (C.M.A.) Hired in early 1932, Jack was the only pilot to make the transition to the new airline.

Likely the recommendation he received from his former employer helped seal the deal. The letter read in part: “As Mr. Mattis possesses a better education that the average pilot, and being a thorough gentleman of moderate habits, he would prove a most valuable employee to anyone desiring his services.”

He prospered in his career, now part of a fast-growing and ambitious organization. Based in Pan Am’s Brownsville base, he ended up flying for all three Pan Am operations operating from there. Evolving from the Mexican Division, Pan Am’s Brownsville operations were renamed the Western Division in July 1932, and its routes extended to the North Coast of South America and Trinidad. In 1933, Jack was transferred to Mexico City, flying the challenging route to El Paso. The flight took eleven hours (but by train it took two full days). In early 1934, Jack flew part of the inaugural service to Los Angeles’ new Grand Central Air Terminal in Glendale. A few months later, he became the superintendent for a section of the route, which was getting new Lockheed Electras too. After a stint at another PAA affiliate in Colombia -- Urabá Medellín Central Airways (UMCA)-- he was shifted again to Brazil with Panair do Brasil. As in his previous assignments he did well there, and as before, that did not go unnoticed by higher-ups. 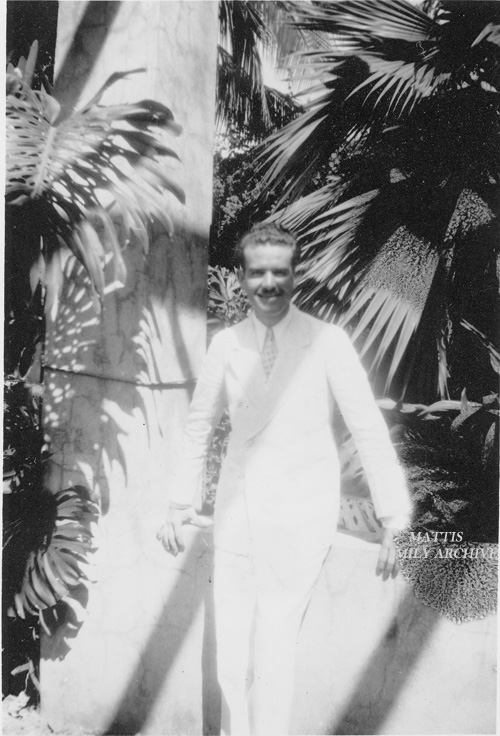 In late 1937, Jack left South America for transfer back to Miami, where a few months later he earned national attention when tasked to fly a Sikorsky S-43 “Baby Clipper” amphibion across the country to the West Coast and on to Alaska, to survey and open a new route connecting the “lower 48” states to Alaska. It was a high-profile mission, but the public attention didn’t faze him. 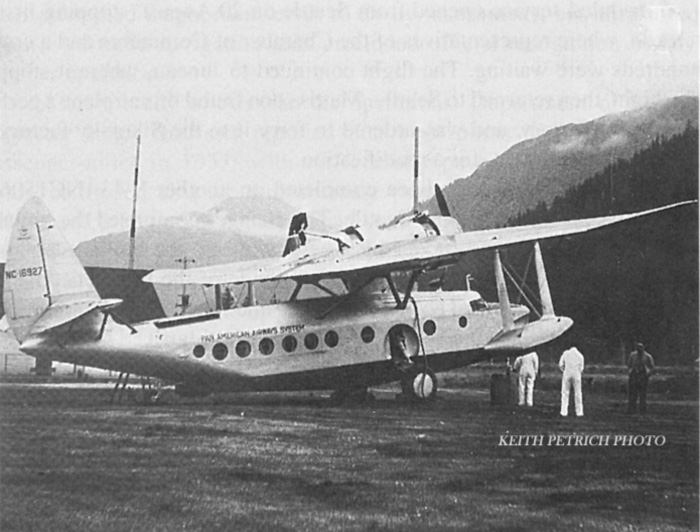 Along with his maturing mastery of flight technology, John Mattis was developing other personal resources that meshed perfectly with the evolving culture and aspirations of Pan American Airways. For one, he was multilingual, being fluent in both Spanish and Portuguese. He felt at home in the unbounded horizons of the Air Age and the varied human geography that came with the territory. Pan Am was America’s “Merchant Marine of the Air” and men like Mattis were part of an elite group akin to the masters of great ocean liners -- inheritors of a tradition that valued skill, experience, and a sophisticated appreciation of the far shores they were apt to visit in their travels. 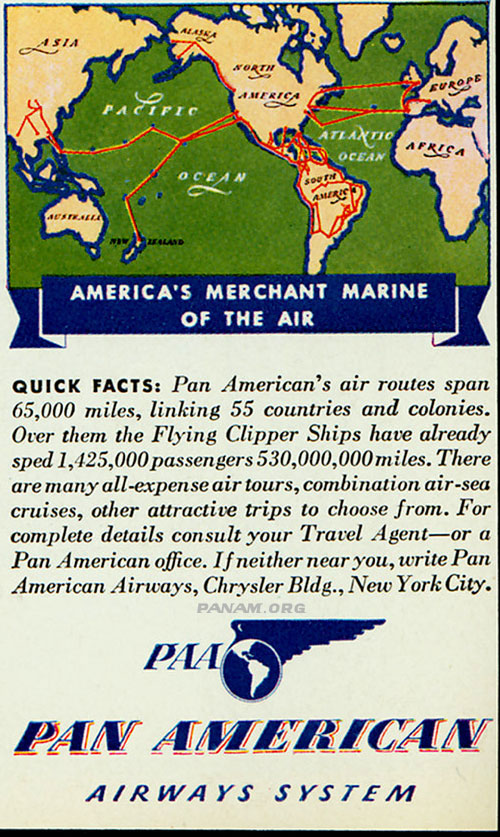 With the coming of the really big flying boats – the Boeing B-314s – Jack was in the ranks of company’s senior pilots, flying out of the Atlantic Division based in New York. His innate inclinations and background were right for the time and place. The onset of war put pressure on everything and everyone in Pan Am. It took some wisdom and perspective to keep priorities straight, and Jack Mattis had that to draw on. His abilities were put to unusual use when in 1943 he was asked to serve as an official liaison to a Portuguese military mission visiting the US. Jack was the sort of human resource that made Pan American such a success.

It’s revealing to read a bit from a wartime memo he wrote entitled “Flight Personnel and the Public:”

[It] cannot but be annoying to the residents of other countries where we operate, and where we should consider ourselves as guests, to haze or criticize those countries in their presence or to complain about the food, climate or accommodations. In this connection, it is interesting to note the good will which is created among these people when they observe that one knows something of the language, history and culture of their countries and that he has a certain respect for their customs and habits.

If he was a natural diplomat, Jack also had another talent that would emerge with time. In 1954, he started work on a sculpture he intended for public display. It was a bas relief frieze for the Catholic chapel at a place he was getting to know well – New York’s Idlewild Airport. Jack lived not far away on the North Shore of Long Island, and he was no stranger to the growing international air terminal.

When in 1956, the bronze frieze was presented to Our Lady of the Skies Chapel, the news made the New York Times, which noted that another of Jack’s sculptures was slated for exhibit later that year in Paris. The article noted that the “self-taught” sculptor “has ample opportunity to study the products of the great European sculptors, represented in museums, churches and public buildings. Between trans-Atlantic flights he spends much of his free time abroad browsing in museums and art centers.”

Perhaps this immersion in Art was what helped connect Jack with one of his passengers, artist Norman Rockwell. In 1955, Rockwell was invited to take a trip around the world on Pan Am, hopefully to capture some of the international sights in his characteristic style, to promote the airline. During some of that travel, Jack and Rockwell had the chance to meet. Jack was motivated to create a profile plaque of the artist, who reciprocated with his own portrait of Mattis. This and other of Rockwell’s portrayals of Pan Am personnel he had met became the basis for a series of popular ads for the airline. 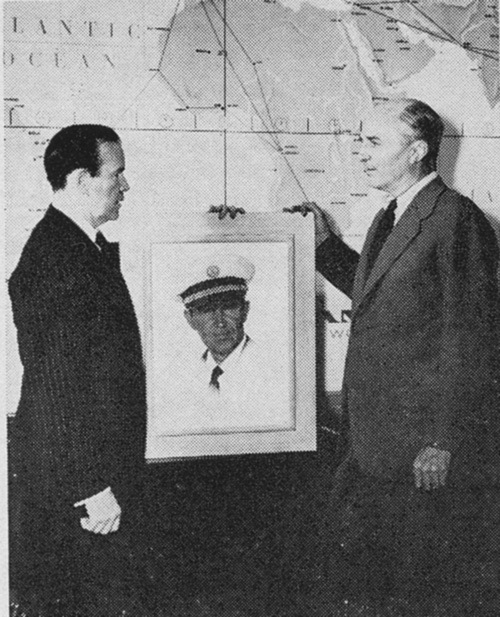 Rockwell’s portrait of Jack was presented to him the following year, and remained in his family for many years. An ad with the portrait appeared in Saturday Evening Post Magazine, titled “Eyes That See Around the World.” Jack Mattis retired from Pan Am in 1966 after 34 years with the company. In the letter he received from his colleague Sam Miller, Pan Am’s Manager of Flight Operations, Jack's contributions were summed up this way: “His whole career as a pilot was one of constant dedication and conscientious service. He has made many contributions to the development, growth and very character of Pan Am’s flight operations during his span of time with the company.”

He passed away in 1988, leaving a legacy of achievement and recognition that remain to this day.

As of this writing, that very portrait of John Mattis by Norman Rockwell is set for auction on November 1, 2019 at Heritage Auctions. Here’s the link:
https://fineart.ha.com/itm/painting/norman-rockwell-american-1894-1978-eyes-that-see-around-the-world-portrait-of-pilot-john-mattis-pan-american-advert/a/5423-68244.s?ic4=GalleryView-Thumbnail-071515