“I may lose battles, but no one will ever see me lose minutes.” 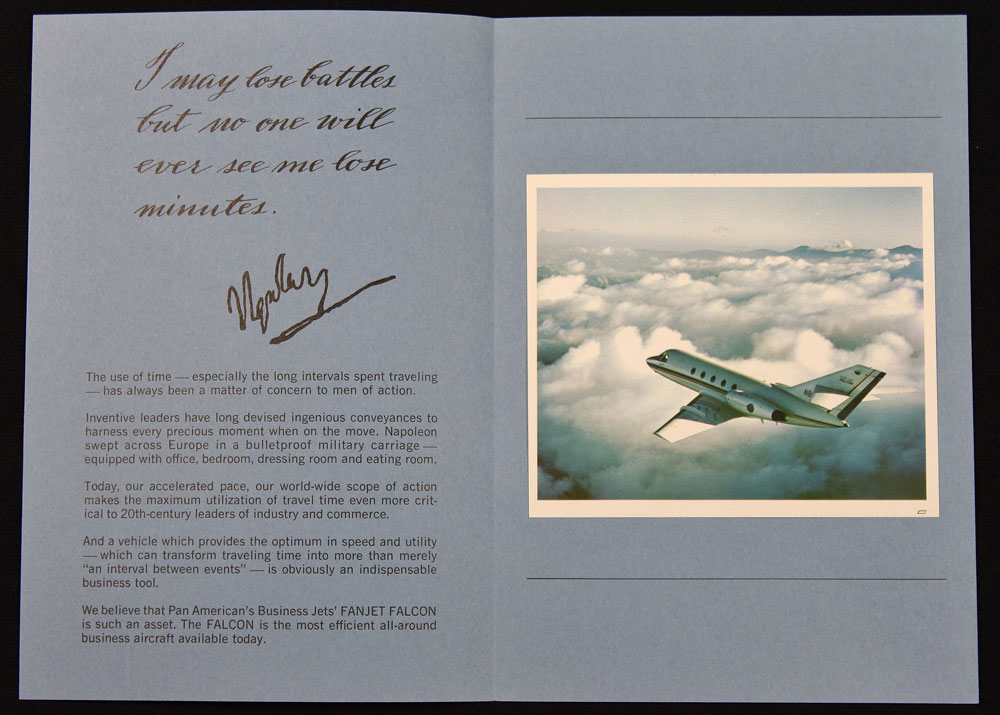 Page from Pan Am Advertising Brochure: Dassault FanJet Falcon, Courtesy Special Collections Division of the Otto Richter Library at the University of Miami

Napoleon would feel right at home in a FanJet Falcon... It was 1966, and the Pan American Business Jets Division was reaching out to potential customers with a novel marketing pitch.

With the help of Col. Paul Downing, an expert in historical carriage development, the company commissioned a set of drawings illustrating the details of Emperor Napoleon Bonaparte’s military carriage (below). It was a remarkable vehicle, one which the Business Jets Division hoped would spur interest in a somewhat more contemporary conveyance, the Dassault Falcon jet which the Pan American World Airways division was selling. 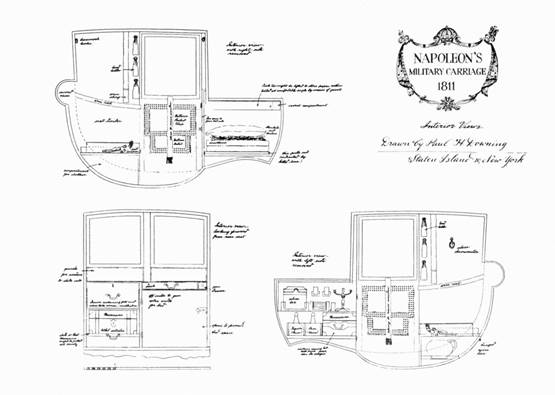 The promotional brochure quoted the French emperor: “I may lose battles, but no one will ever see me lose minutes.” If you needed to make good use of your valuable time, the theme was, a FanJet Falcon aircraft could do for you what Napoleon’s military carriage did for him. He traveled around Europe never needing to stop to sleep, eat, dress, or conduct his business affairs, because his carriage (bulletproof, and pulled by a team of six horses) provided facilities for all of that. The Falcon wasn’t bulletproof, but it certainly made for personal transport that could provide any convenience Napoleon enjoyed.

Along with the elements of the original promotional package (preserved at the Special Collections Division of the Otto Richter Library at the University of Miami), we’re pleased to present the work of artist Andrezj Novak-Zemplinski, who painted the historical scene of Napoleon’s carriage, stopped at the Polish village of Paprotnia in 1812. 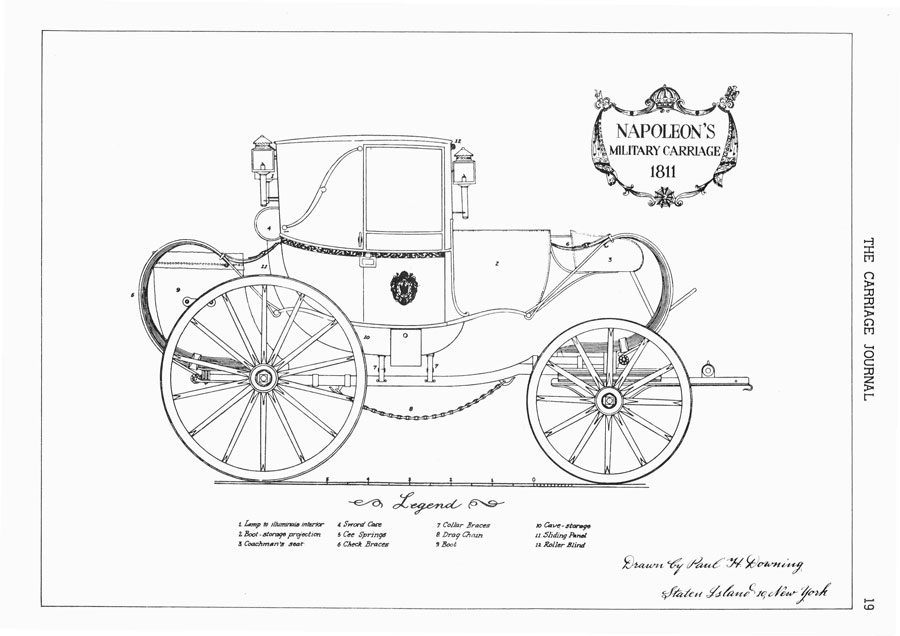 The following description of the carriage’s interior, and Downing's plans are courtesy of the Carriage Association of America, which featured an article by Col. Downing, Napoleon's Military Carriage, about the amazing carriage in the March, 2015 issue of their publication, The Carriage Journal.

The carriage was captured at the Battle of Waterloo in 1815, and was sent to Britain to be put on public display. The vehicle stirred considerable public interest during its exhibition. It ended its days at Madame Tussaud's Wax Museum where it was destroyed in a fire in 1925.

An official British report created after the Battle of Waterloo noted:

"The interior of this remarkable carriage deserves particular attention, for it is adapted to the various purposes of an office, a bed room, a dressing room, a kitchen and an eating room."

"There is a writing desk, opposite the seat in the rear, which may be drawn out so as to write while the carriage is proceeding; an ink stand, pens, etc. were found in it, and here was also found the Emperor's personal atlas."

"There are also many smaller compartments, for maps and telescopes; on the ceiling a net hammock could be attached for carrying small traveling requisites." 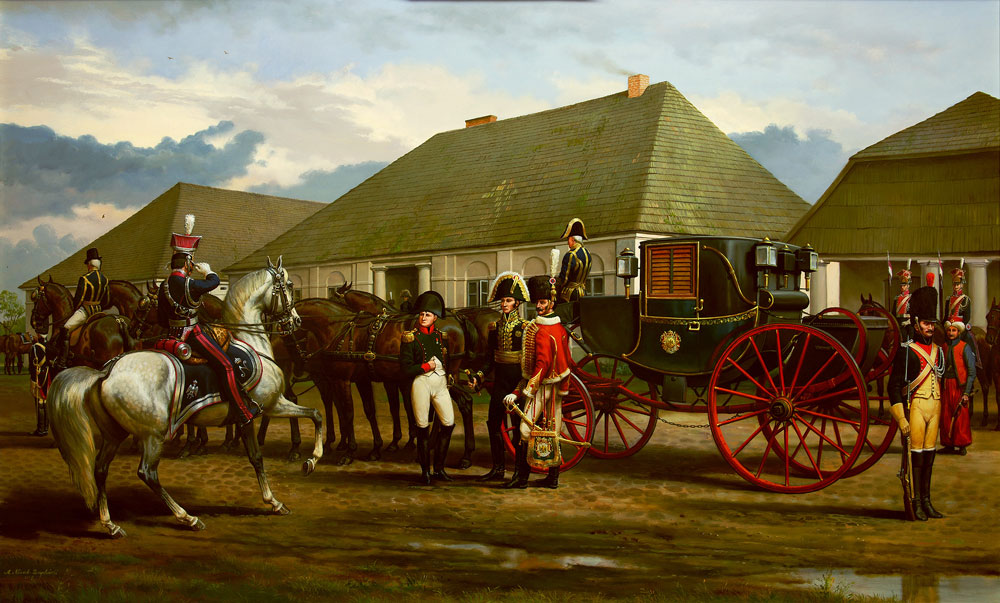 "Beneath the coachman's seat is a small box, about two feet and a half long . .. this contains a bedstead of polished steel, which could be fitted up within one or two minutes; the carriage contained mattresses and other requisites for bedding, of very extensive quality, all of them commodiously arranged. There are also articles for strict personal convenience, made of silver, fitted into the carriage."

Napoleon didn't have use of a Falcon business jet, but he had what might have been the next best thing.

Read the entire article as it appeared in the Carriage Journal at Napolean.org: http://www.napoleon.org/en/reading_room/articles/files/485789.asp#ancre0

"Ask me for whatever you please except time; that is the only thing which is beyond my power." 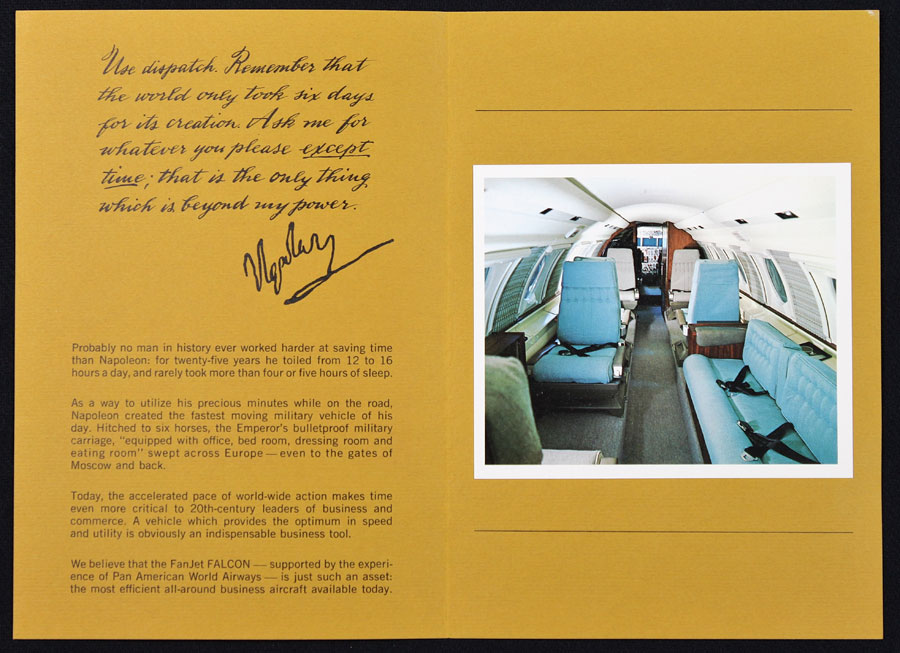