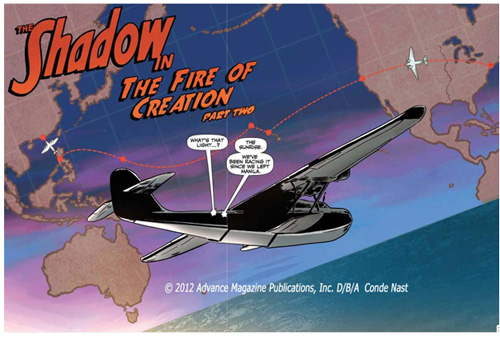 Two icons of 1930's America are flying high again. Lamont Cranston, The Shadow, is back. Born as a character in pulp fiction during the early 20th century, the sleuth with psychic powers became a popular hero on radio in the 1930's when Orson Welles played the part.

Pan American's China Clipper of course was the world's first transoceanic airliner, which bridged the Pacific beginning in 1935. One of three Martin M-130 flying boats built for Pan Am, she represented the epitome of adventure and was a harbinger for the oncoming global air age. Like the Shadow, the China Clipper was the stuff of legend, except she was absolutely real.

Both the Shadow and the China Clipper share the pages of new a comic, The Shadow # 2, (Part of six part series: The Fire of Creation) written by Garth Ennis, illustrated by Aaron Campbell, and inked by Carlos Lopez; published by Dynamite Entertainment.

The Shadow is no angel. He's a man with a mysterious and troubled past, who uses his ability to "cloud men's minds" - along with his two .45's - to do better by the world. In the story, Cranston, accompanied by his companion, the alluring Margo Lane, is riding the China Clipper west across the Pacific, seeking to keep a mysterious but very important unidentified object from falling into the hands of the Axis powers. In the meantime, Major Tateo Kondo, of the Imperial Japanese Army's Military Intelligence Service is hatching his own plans for an unpleasant arrival for them in Shanghai.

If you want to learn how Lamont and Margo are going to get out of this, check out dynamite.net or go to mycomicshop.com for various covers. But beware: the first printing sold out, and there's no telling if the promised second printing won't meet the same fate!