From Routine to Daunting:  A Glance into Pan Am’s Charter Business

From its 1927 start Pan American Airways’ chartered idle aircraft to generate revenue. Pan Am firsts charter jobs were non-scheduled runs to Cuba and Nassau, before expanding throughout the Caribbean, Central and South America for a varied client base. (Pan Am’s 1932 $100/hour domestic charter rate -- ~$2,200 in 2022 $US -- covered aircraft, crew, fuel, and maintenance. Clients were required to take on insurance covering the aircraft’s value.)

On Saturday, December 28, 1932, Reverend A.F. Parkinson Turnbull officiated a double wedding above Port au Prince, Haiti aboard a chartered Sikorsky S-38. Paramount Pictures used Pan Am aircraft as areal filming platforms and backdrops, while wealthy Americans flew to the Bahamas and Nicaragua’s Pacific coast sport to fish and drink, and to Havana to gamble and drink. 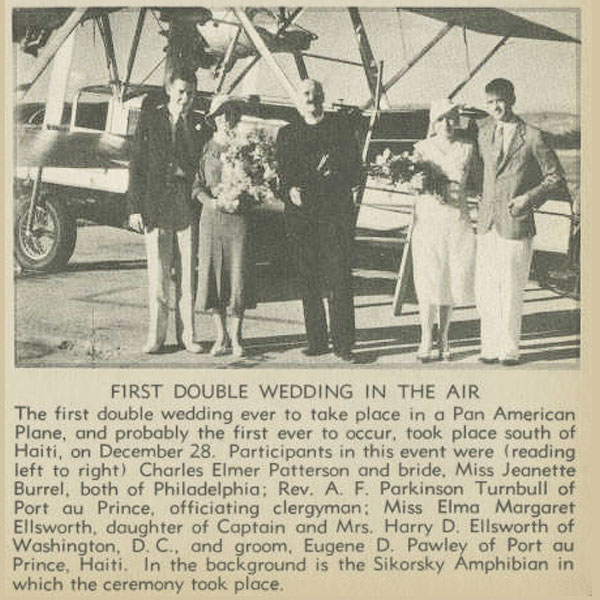 Governments along Pan Am’s routes bought flights to assess damage following hurricanes, earthquakes and volcanic eruptions and to inventory natural resources. Scientific teams linked to the University of Pennsylvania Museum of Archaeology and Anthropology and to the Carnegie Institute chartered Pan Am aircraft to work in the hard-to-access Yucatan region and along Brazil’s western frontier.

For more on these scientific charters see: 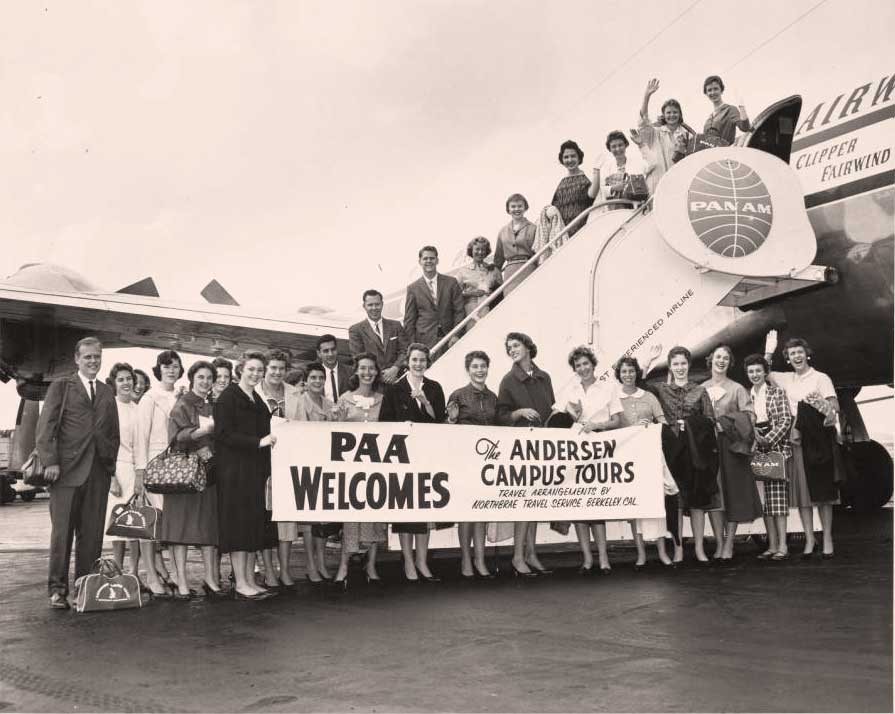 Clipper Fair Wind (DC-6B, N5028K) was the 45th (and last) DC-6B delivered to Pan Am, arriving June 15, 1954.  N5028K flew for Pan Am (also named Clipper Hannover and Clipper Andrew Jackson) for ten years ending with a 1964 six-month lease to Austral Lineas Aereas, an Argentine domestic carrier that Pan Am was negotiating a 22% stake using surplus DC3s.

Sold to Iran Air Jan, 15, 1965 and registered as EP-AEV, the DC-6B became a globe-trotter. After spending nine years in the Middle East, the twenty-year-old DC-6B was one of three Iran Air DC-6Bs sold to Bird Air (based in Bangkok, Thailand) in November 1974 and reregistered as N54CA. Owned by Bird and Sons, Inc., an Oakland, CA construction company, Bird Air flew the three DC-6s and civilian-crewed and de-identified US Air Force C-130s into Cambodia and Laos during the war years for the US Central Intelligence Agency. 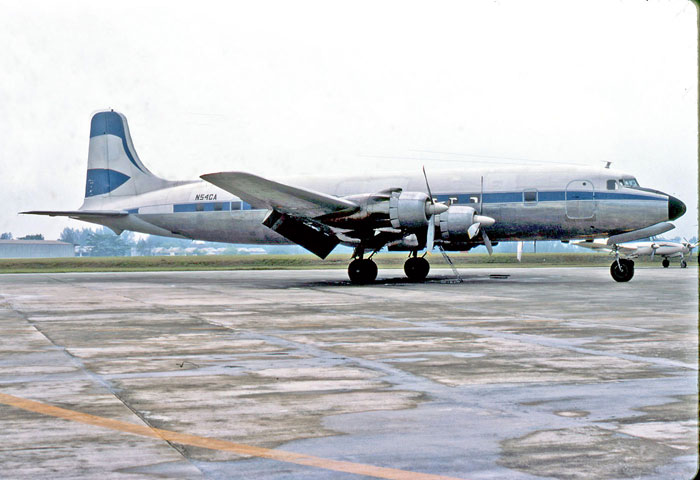 After five years of heavy use in Southeast Asia, including hauling livestock from Singapore to the Middle East, Bird Air parked the worn-out and aromatic twenty-five-year-old airframe at Singapore’s Seletar Airport in 1979 with a for-sale sign. A for-parts purchase fell through, however, when the ferry crew refused to fly the dilapidated DC-6B. 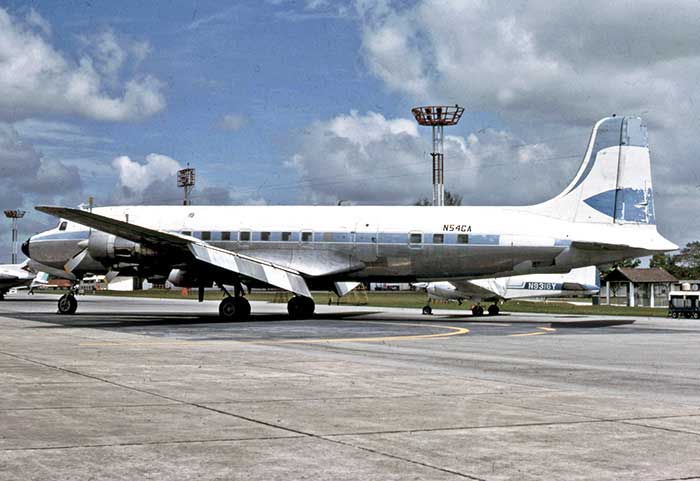 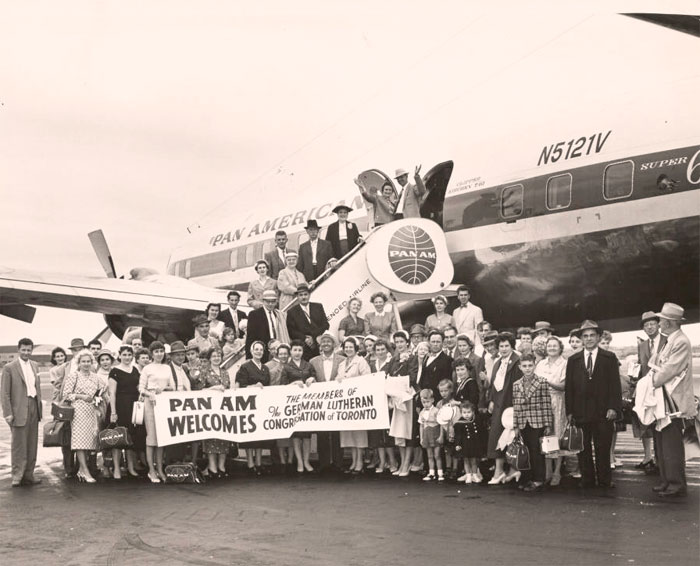 Delivered to Pan Am April 26, 1954, the Douglas DC-6B (N5121V) “Clipper Splendid” flew the August 1959 charter job as Clipper Kirchen Tag. Renamed Clipper Hamburg the airplane flew another eighteen months with Pan AM until it was sold March 2, 1961to Loftleidir Icelandic. (Note to collectors: The Clipper Splendid N5121V is a Pan Am liveried DC-6B diecast model in the Hobby Master Airline Series (HL5001), although it is difficult to find.) 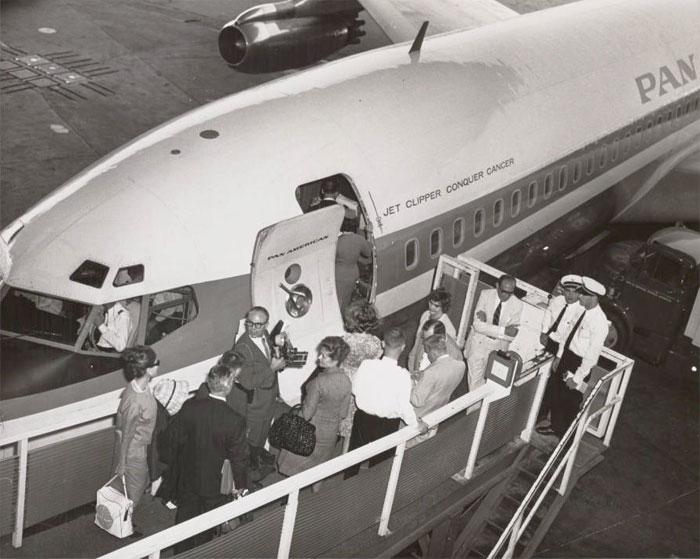 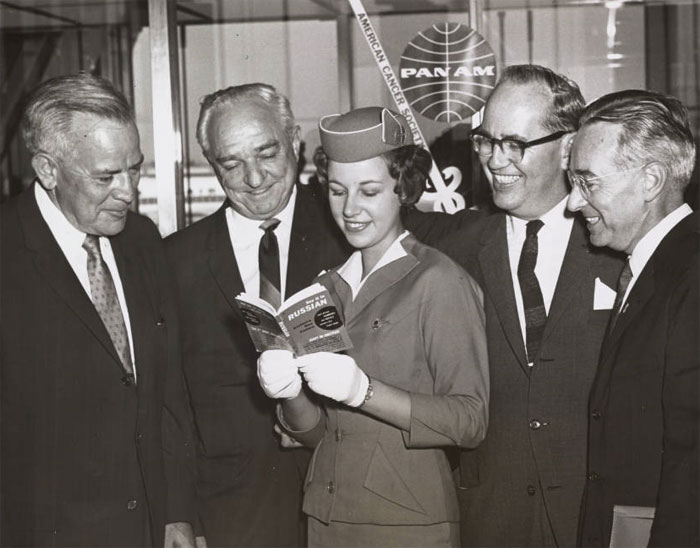 Trippe kept the Moscow agreements nearby should superpower relationships improve, and five years later with President Lyndon Johnson’s nod, in June 1966 Trippe and Pan Am Board of Directors boarded a new Boeing 727 (headed east to Pan Am’s Inter German Service) for a multi-stop Europe and behind-the-Iron-Curtain tour.

Betty Trippe recounts that as the entourage toured a Leningrad sports arena she feigned a twisted ankle to get Juan and General Loginov away from KGB handlers. Supporting a “limping” Betty, Juan and “Eugene” carried out a whispered, and fruitful conversation.

R.E.G. Davies. Aeroflot: an Airline and its Aircraft. Paladwr Press, 1992.

REG Davies. Pan Am: An Airline and its Aircraft. Orion Books, 1987.