The first feature (October 1932) crowned Don as a “Horizontal Salesman.” Following the article’s opening -- “A real Pan American man may be down sometimes but he is never out of service.” -- readers learned that “Doc” worked at the Miami hospital…meaning he didn’t let a hospitalization keep him from promoting Pan Am. “Flat on his back in a hospital in Miami,” wrote the reporter, “genial and buxom official Don Singer, guide at Dinner Key, sold two nurses trips to Havana.” 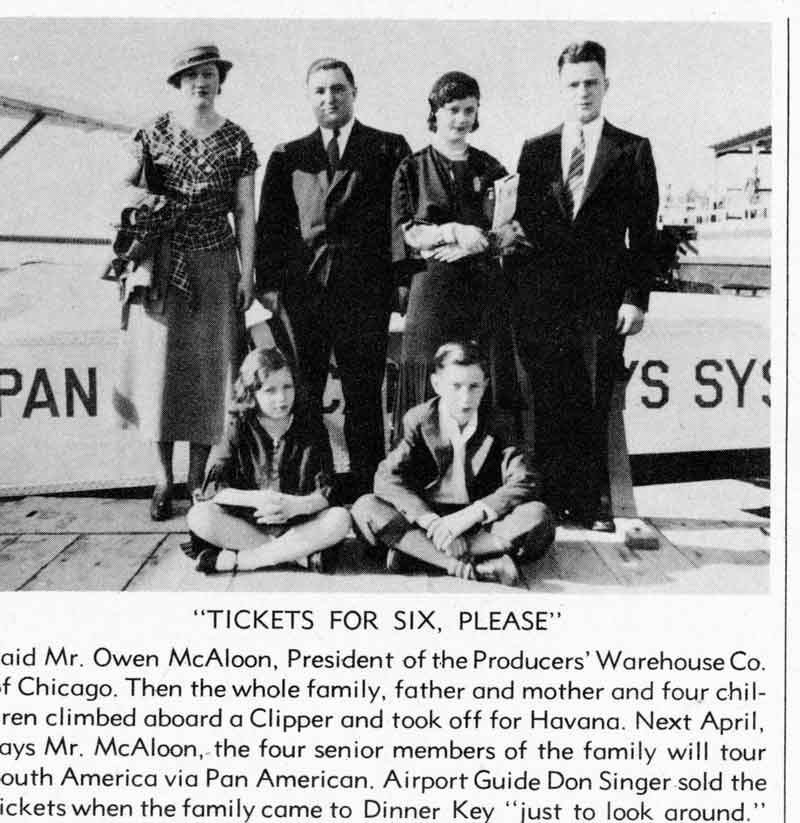 A 1933 article recounted the McAloon family’s Singer encounter. At the end of a Dinner Key tour, the McAloon family from Chicago, who had come to the airport that day to “just to look around,” were found in front of the ticket counter where “Mr. Owen McAloom, President of the Producers’ Warehouse Co. of Chicago,” flanked by Don Singer, announced “tickets for six please.” The entire family had decided to spend a day in Havana, Cuba. The story added that Owen McAloom, his wife, and two oldest children would be back in April to tour South America via Pan Am.

Two moments from 1934 expanded Singer’s notoriety. Colleagues at Dinner Key were shocked in the late winter when a line of busses turned off South Bayshore Drive onto Pan American Drive and disgorged 750 tourists. Awaiting the horde was a smiling and unruffled Doc Singer and his staff; Don had convinced a steamship company that offered its customers a post-cruise “automobile tour of Miami” to modify its no-stops agenda to include a forty-five-minute Dinner Key visit. In the fall Pan American Air Ways shared Singer’s interactions with another particularly tough audience: “64 New Yorkers who were brought to the airport one day by Tauck Tours on a short sight-seeing trip through Florida. They had “no time for any side trips.” When the tour bus left so did fourteen Miami-Havana round-trip tickets.

The writer who reported this sales coup commented, “If you need any expert counsel on the proper procedure in the painless extraction of the actual cash-money business from a miscellaneous and only mildly interested public, just consult Dr. Don Singer.” This admirer failed to mention that both visits worked against the tour-sponsors’ interests, introducing their customers to Pan Am’s air-travel options.

Pan Am’s new Sikorsky S-40 and Sikorsky S-42 “Clippers” extended Pan Am’s early passenger profile of adventurers, diplomats, business persons, and Pan Am employees to include tourists with money and time for long-distance travel to exotic places. Among these new customers were experienced travelers who had toured Europe and the Far East with a travel guide who managed schedules, currency exchange, housing, meals, sight-seeing/cultural entertainment, language/cultural translation, and other needs, leaving their clients free to enjoy themselves.

To meet this niche, but lucrative, market, Pan Am announced a fixed-price, all-inclusive “cruise” to South America led by a seasoned Pan Am employee. Don Singer inaugurated this concierge service in mid-1936. Pan American Air Ways reported that, “Among those first to take advantage of Pan American's new series of all expense cruises from Miami through the West Indies and down the South American east coast to Rio were Mr. and Mrs. Burt J. Denman of Chicago. Mr. Denman is vice-president of the United Power Company of that city.” Don Singer’s South American tour duties kept him away from Annabelle for most of the second half of 1936. Starting July, “Doc” made a monthly circuit on the Miami to Rio route, spending fifty days (minimum) aboard Pan Am aircraft, and at least sixty-five days in beds not his own. The Sikorsky S-42 was the most comfortable aircraft available, and the route’s hotels were the best available at each overnight stop: still, the travel was grueling. Unlike his clients, Singer was on perpetual “call” reacting to clients’ requests, while refining and documenting the services available at each port so that other guides could take over this role.

The December 1936 run was particularly important. Although Don had cared for many high-profile clients across his Pan Am career and had led extremely wealthy individuals to Brazil and back, this trip added Pan American Airways President, Juan Trippe and his wife, Betty, to his care for the five-day return to Miami. 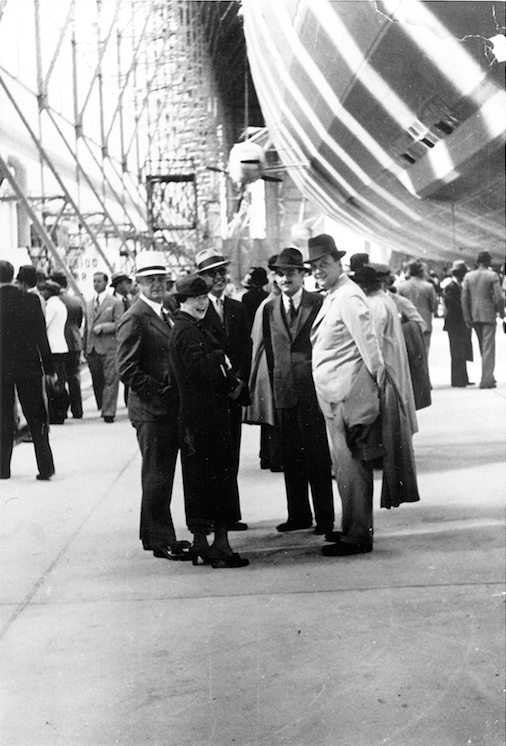 Juan Trippe (r) after arrival in Rio aboard the Hindenburg 1936, Photo by Betty Trippe who accompanied him on that flight (PAHF Collection)

The Trippes were on the homeward leg of a fifty-three day, round-the-world trip when Singer and Pan Am staff met the couple in Rio as they stepped off the German dirigible, Hindenburg. And, at each stop between Rio and Miami, Don balanced press reporter and photographer desires for access to the Trippe’s with other passengers’ needs for an efficient disembarkment, dinner, bath, and bed. At Miami “Doc” faced the same scene; however, on this day he could pick up his bag, walk across the Dinner Key facility, get in his car and drive home to 157 W 14th St.

Doc Singer derived joy beyond on-the-job interactions with tourists, passengers, and Pan Am colleagues. For twenty-five years, if there was a company party in Miami, a colleague’s success to celebrate or misfortune to temper, he stood at the vanguard.

When a Miami-based employee had to leave Miami and Pan Am in 1933 due to health problems, Don turned the 36th Street terminal into a dance hall for a fund-raising event. “The entire personnel stationed in Miami,” responded to Don’s benefit-event invitation and “turned out almost to a man to step to the music of one of the city's best orchestras, and to see the snappy floor show.” With a cash cushion and aware of the Pan Am “family’s” support, the colleague headed to convalesce in Arizona. 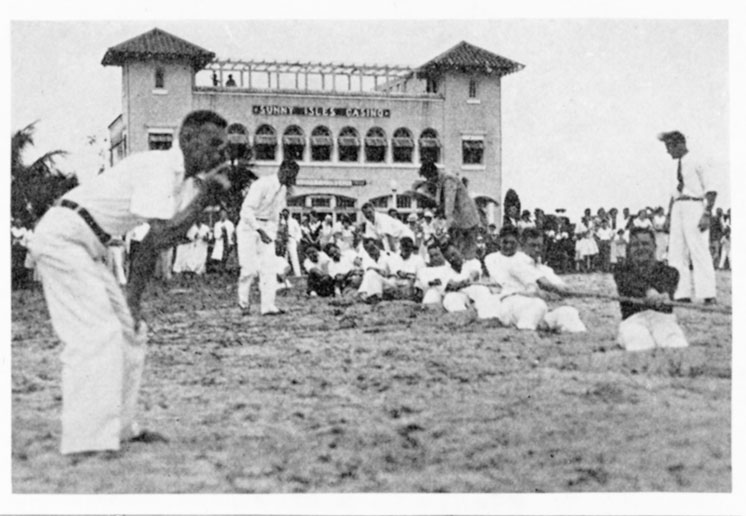 Pan Am’s second annual official employees’ party occurred at the Sunny Isles Park and Casino, Saturday, November 10, 1934, and 900+ Miami-division employees (and employees from its far-flung network of Caribbean bases with an excuse to be in Miami) competed in tug-of-war, foot races, egg races, beer races, baseball games, and socialized, snacked and danced throughout a day topped off by dinner prepared by Chef Buehler of the Pan American Restaurant on the second floor of Dinner Key terminal.

Don “Old Maestro” Singer stood all day amidst the mayhem dolling out lemonade and ice cream to the kids, pulling ice-cold beer for adults, addressing everyone by name, and directing anyone in need to restrooms, changing rooms, dance partners, etc. 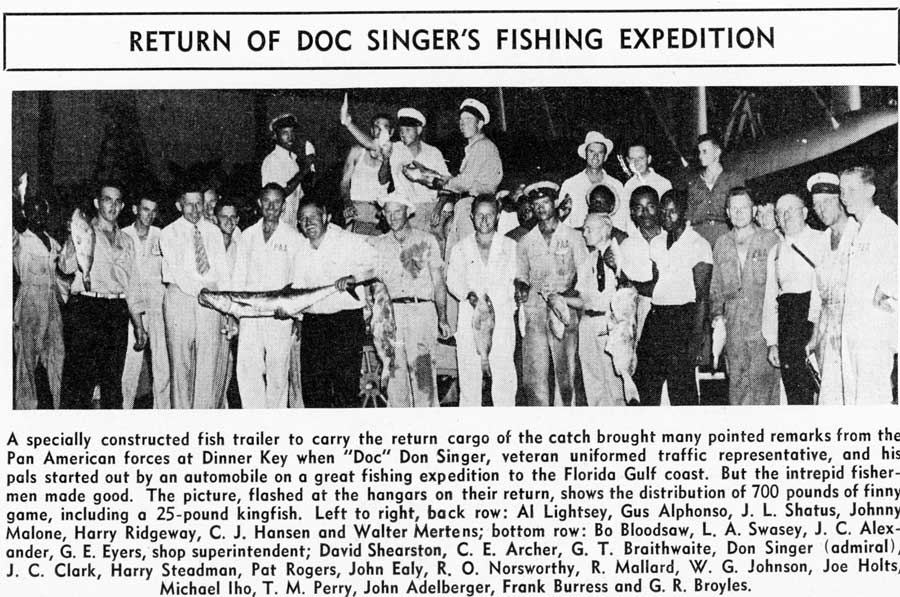 When the pace around the airport needed a jolt, Don acted. In late summer 1937 “Admiral” Singer announced a road-trip/fishing weekend. Twenty-eight men from Pan Am’s maintenance shops and service areas headed west to the Gulf coast in a convoy following Singer whose auto towed “a trailer specially constructed” in the company’s machine shop that “brought many pointed remarks from Pan American forces at Dinner Key.” Those naysayers backpedaled when Singer’s trailer rolled back onto the airport grounds groaning under seven-hundred pounds of “finny game”. 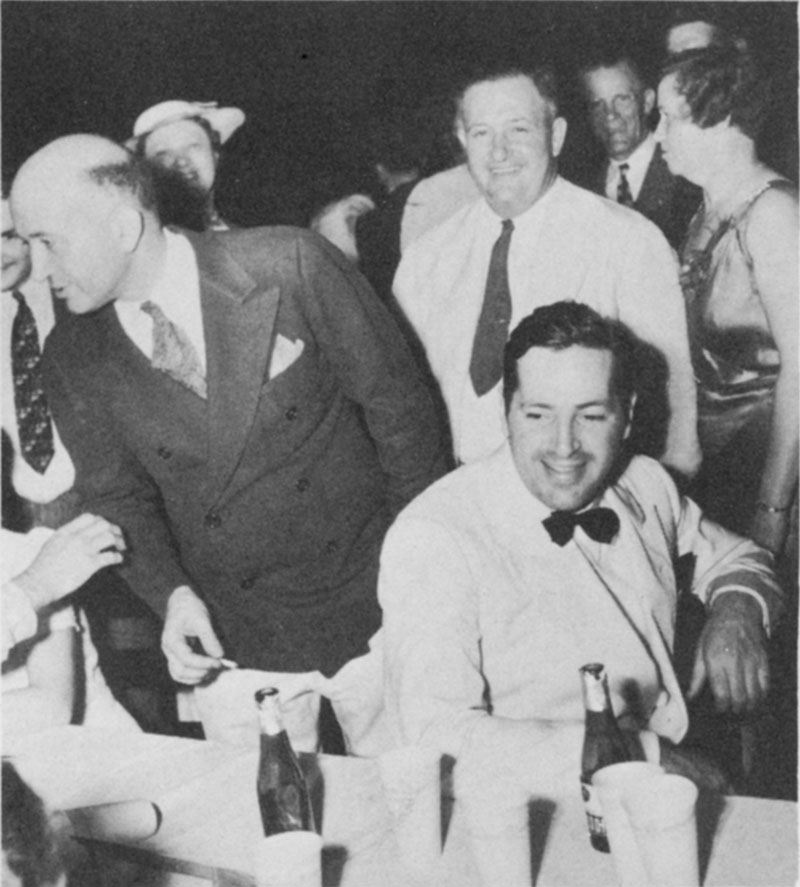 Completion of a much-needed new hanger at the Dinner Key base was a first-quarter-1938 highpoint. The site’s third hanger was the largest and most expensive, costing over $70,000, and allowed Pan Am to claim bragging rights as “one of the world’s largest steel hangers.” To celebrate, Don and two other “party ringleaders,” Division Manager Snyder, and Division Engineer Humphrey “Hump” Toomey, followed the ribbon-cutting ceremony with a late-into-the-evening party on the still polished hangar floor. A big-band, positioned on a riser bordered by two polished, three-blade propellers, entertained the revelers as “Doc” mingled.

After serving twelve years as Pan Am’s most-met Miami face, Don Singer transitioned from “outside sales” at the Dinner Key curb to “inside sales” at the company’s new regional sales office -- 300 East Flagler Street in the heart of Miami’s business district. Despite wear and tear of walking miles each day, climbing in and out of aircraft, hauling luggage, keeping visitors from straying into harm’s way, Don remained at the forefront of the company’s sales efforts and its social life. With Don positioned behind the scenes system-wide tales of his exploits were less frequent. Yet, amidst World War II a nostalgic “Do You Remember” piece in The Pan American Clipper (August 1943) looked back a decade and recalled, “’Silent’ Don Singer and his personally conducted tours of sight-seers at 36th Street and Dinner Key. He really sold them.” And in 1947, working with his first Assistant Tour Guide, Paul Muller (who too had shifted inside to manage the airport’s lost-and-found office), “Doc” served as auctioneer/emcee for the annual charity sale of abandoned items which included, “an oil painting appraised at $25 to a grass skirt appraised at 15< £, and included a total of nine cameras, a small mountain of books.” 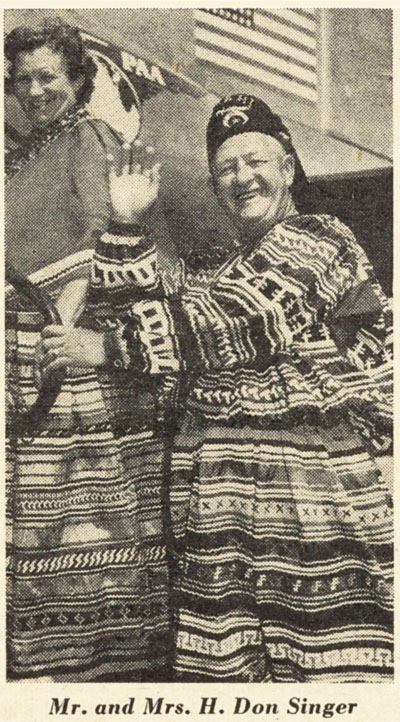 The last company-wide Singer report appeared in The Clipper (June 1950) with Don and Annabelle pictured boarding a west-bound Pan Am aircraft headed for the National Shriner’s Convention in Los Angeles, June 20-23. As always, “Doc” stole the show: arriving in a Seminole Indian costume to represent Miami’s Mahi Temple of the Shrine. In an obvious bit of overstatement, The Clipper reporter noted “except for a Shrine fez, Mr. and Mrs. H. Don Singer had the appearance of two genuine Seminoles when they deplaned at Los Angeles and various stops along the route.”

Haze Donald “Doc” Singer died June 12, 1955 in Miami, Florida, after which he likely led others “ticketed for departure” to their next adventure saying, “Right this way folks.”