Ferris W. Sullinger walked down the ramp from Pan American Airway’s (PAA) Consolidated Commodore NC668M to the landing barge moored at Harbour Head, Kingston, Jamaica, Friday, April 10, 1931. As he told the Daily Gleaner newspaper beat reporter who greeted the flight’s seven passengers, while this was his first Jamaica trip, he wasn’t a tourist. Ferris Sullinger, Assistant Communications Engineer, came to Jamaica to install a direction finder apparatus at PAA’s Radio Station on Elletson Road, a mile or more west of the company’s waterfront landing area. 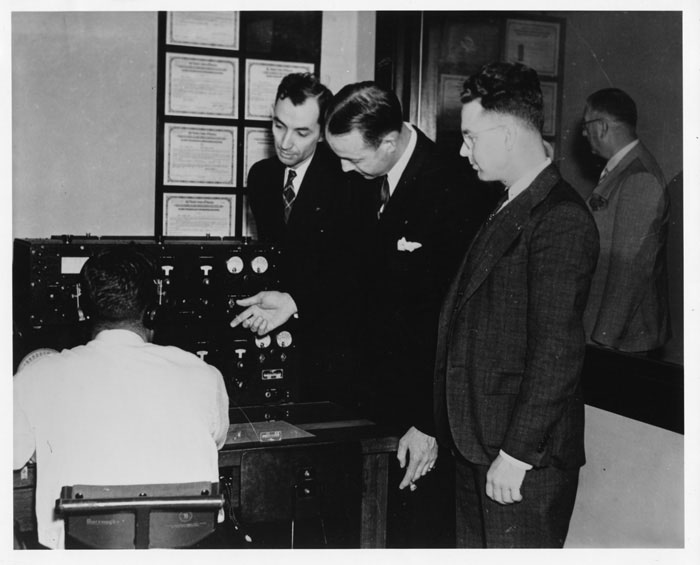 Having said good-bye to Captain Wallace “Red” Culbertson and crew, Sullinger oversaw his radio freight transfer to the company’s Elletson Road office. Only then did he check in for a three-night stay at the palatial Myrtle Bank Hotel – a residency that stretched unexpectedly into three weeks, and, for which, he had most definitely under packed.

Although radio direction finder (DF) technology predated World War I, PAA’s communications staff, refined DF for commercial aviation, first installing DF units on its most-challenging Mexico and Caribbean routes. The Jamaica-based routes (Kingston to Barranquilla, Columbia run and the Kingston to Cristobal, Panama run) were the world’s longest over-water routes, to date:  each spanned six or seven hundred miles. The aircraft that first flew these routes (Sikorsky S-38s and Consolidated Commodores) did so near to their operational limits. 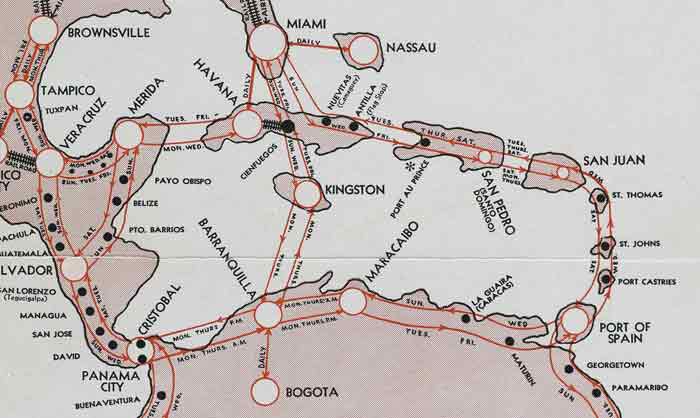 PAA’s DF units operated differently than the telegraph radio systems installed in every aircraft. As the Daily Gleaner reporter who followed this story explained to the newspaper’s readers on page twenty-two of its Tuesday, April 14 edition, “The Radio Compass is purely a receiving instrument. It picks up the waves from the instruments on the flying boats and calculates their position relative to this island. The information thus gained is sent out to the pilots to assist them in heading their machines straight for their destination.”

The DF installation was uneventful and Sullinger began to train local staff to use the equipment and to integrate the information gleaned into PAA’s prescribed interactions with in- and out-bound flights. This activity, too, went well, at first. Then a gremlin appeared. 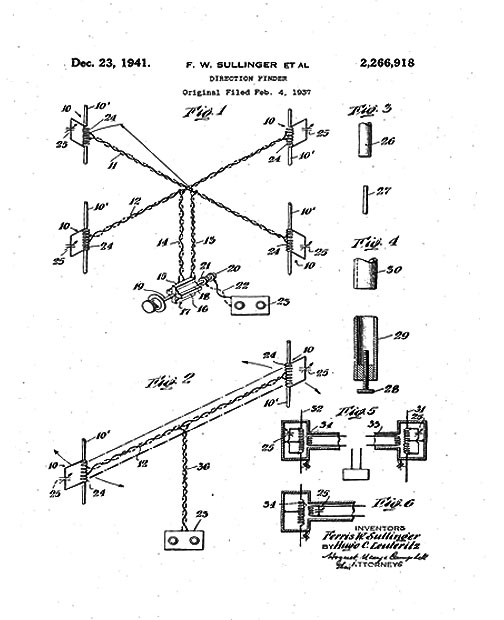 Two weeks later (April 28), Daily Gleaner readers learned that “a problem … is confronting the Pan-American Airways radio people here. A frying noise is heard intermittently at the station in Elletson Road and Mr. Sullinger … has been having quite a hunt to trace the source of the interference. … Mr. Sullinger was out on a hunt in a car rigged with antenna on top and receiving equipment inside with directional facilities, to find the cause.” The interference gremlin eluded Sullinger and his team. It appeared and disappeared without pattern and Sullinger was stumped. Whatever caused the “frying sound” was nothing he had encountered before.

Worse, while Kingston’s DF unit signaled unimpeded most of the time, the fact that transmissions sent to PAA aircraft could be affected by an unknown interference source meant that Sullinger could not approve the unit for operation. PAA’s “Safety First” policy demanded perfection; Kingston’s DF unit did not meet that standard. Nor would it until mid-May 1931. 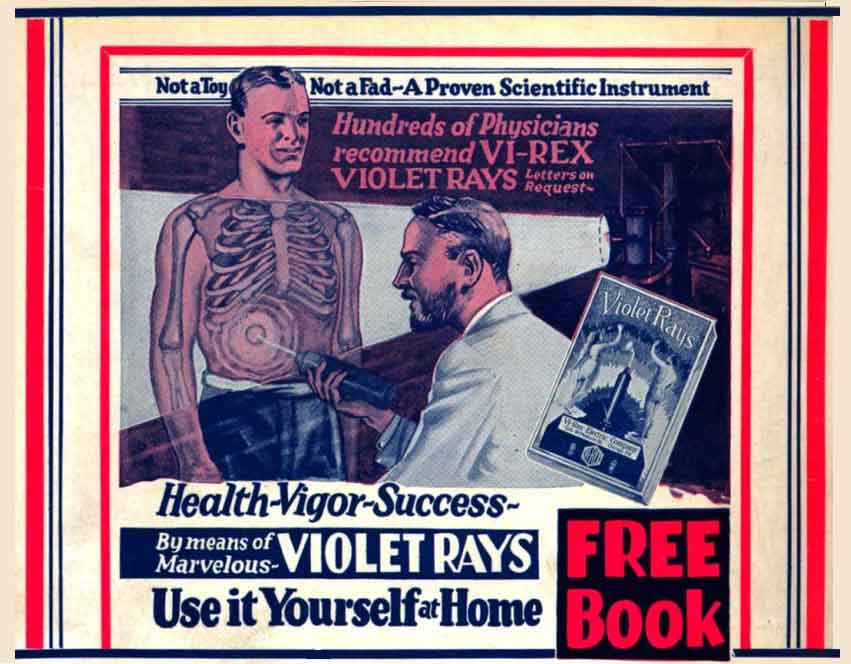 Invented by Nikola Tesla, violet ray devices were medical electrotherapy appliances used during the early 20th century consisting of an ungrounded, control box housing an interrupter and magneto coil. An attached Bakelite wand contained the high-voltage coil and attachments port. Glass, evacuated tubes of varying shapes, inserted into the handle, applied the current to the body, external and internal. Violet ray therapy provides no proven therapeutic value and is banned in most countries.

Assistant Communications Engineer, Ferris Sullinger returned to Miami without locating the “frying sound” that halted Kingston’s DF roll-out. But, during his three-week stint in Kingston, Sullinger met Jamaica’s Public Service Company staff who also searched for the gremlin’s home. When forced to leave with the job unfinished, they promised Sullinger that they would search until they found whatever was wrecking havoc in the local ether. And, they did.

Again, the Daily Gleaner carried the story. Explaining that following Sullinger’s departure, “The Public Service Company, however, carried on the work,” their reporter noted that, “their Mr. Hardie discovered that the disturbance came from a violet ray machine in a city doctor’s office. Steps were taken to control the disturbance, and a filter is being installed in the power circuit of the machine. By this means it is hoped to put an end to the noise.” 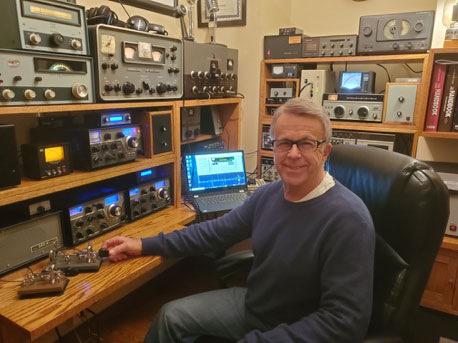 According to Ron Howes (KD4MV), a five-decade ham-radio operator and radio collector, Sullinger’s violet-ray-machine-problem stemmed from the fact that, “high voltage was produced by rapidly interrupting direct current and then stepping up the resulting pulses with a high voltage coil. This is exactly how the old spark coils in the cars of this era worked.”

At the start of the 20th century, radio communication using spark-gap transmitters was common. Spark coils were keyed by a telegraph key, and a distant receiver picked up the spark gap’s frying noise and the operator would decode the Morse code. This crude radiotelegraph, replaced in the 1920's by clear single-frequency transmitters, was more effective than spark signals which produced a ragged signal across a broad range of frequencies.

So, unintentionally, the Violet Ray machine was a spark-gap radio transmitter.  While it had no antenna, its signal probably radiated by the power lines running into the doctor’s office.

Ron admitted that he wouldn’t have been certain where to begin had he been Sullinger faced with the unanticipated “frying sound,” but, he added,

In my ham radio endeavors over the years I have been plagued by various kinds of "frying" noises sometimes drowning out the signals I was trying to receive. Most of the time the noise resulted from electrical arcs (or sparks) along power lines. I could usually find the offending power pole by driving around listening to a clear frequency on the car AM radio. The noise would peak at the site of the problem. The power company would usually act quickly on my report to fix the problem. They don't like arcs very much either!

All that considered, Ron Howes knows that anyone flying PAA through Jamaica in the early 1930s benefitted from Sullinger’s refusal to put the system on line before a fix was found.

Thankfully, the DF system went into full-time service, and, in August 1932 was augmented by another Sullinger-installed RD system positioned at the PAA/SCADTA base at Barranquilla, Columbia. With that addition PAA’s entire western Caribbean over-water routes were flown using RD technology to add yet another layer of safety to what was by then, the world’s safest airline.

The Pan Am Historical Foundation.