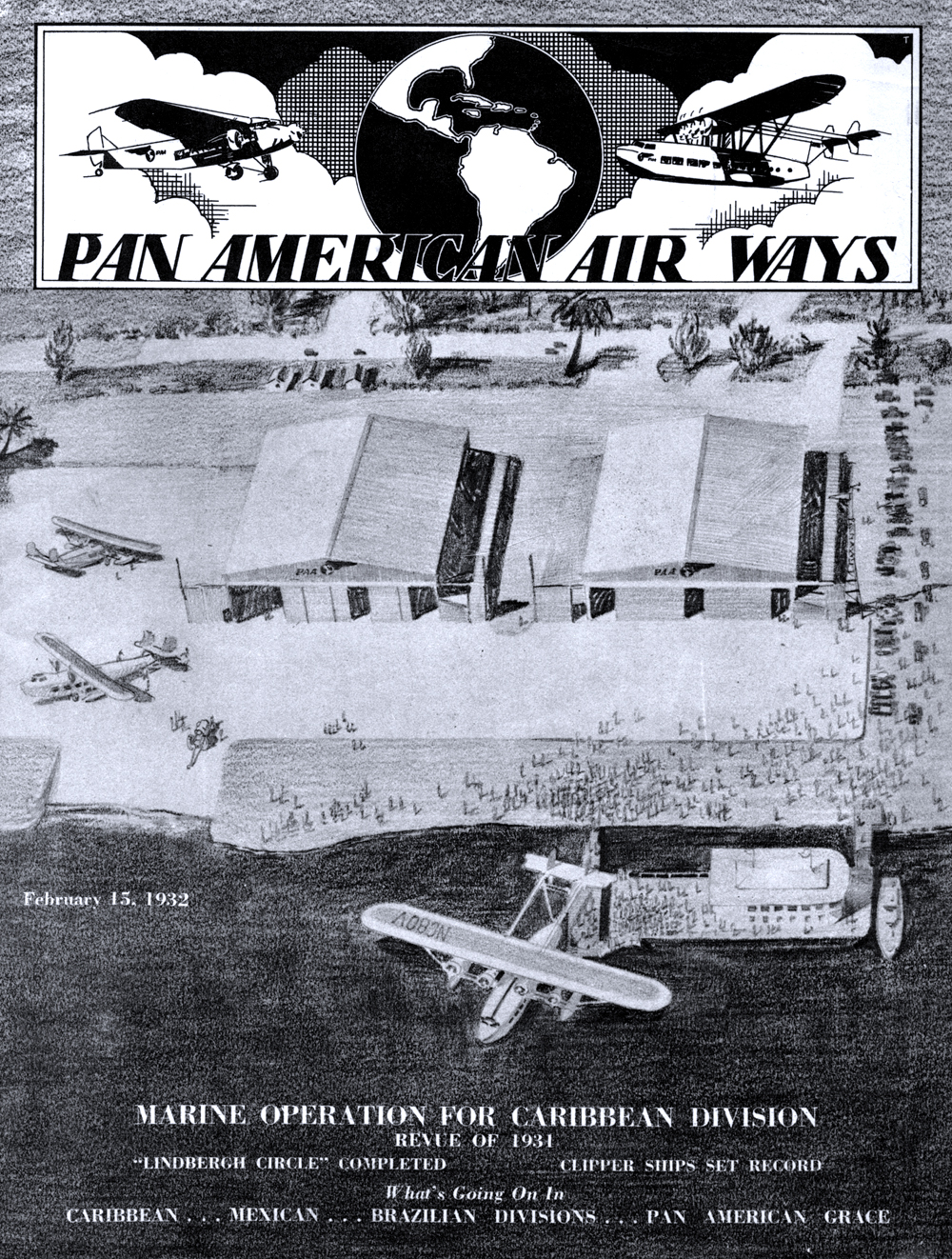 February 15, 1932 Pan American Air Ways Magazine. "The cover design is a pencil sketch of Dinner Key Base, now the international airport for the Pan American Airways System. The drawing was made by Kenneth W. Thompson shortly after the 'American Clipper' landed."

"...with the introduction of the "Clippers" and the establishment of marine operations out of Miami, it has been possible to cut travel time between the two cities to a minimum. Today the boats take off at Dinner Key base in Coconut Grove and land in Havana Harbor two hours later, which about equals the time it takes to drive from Miami to Palm Beach by motor. 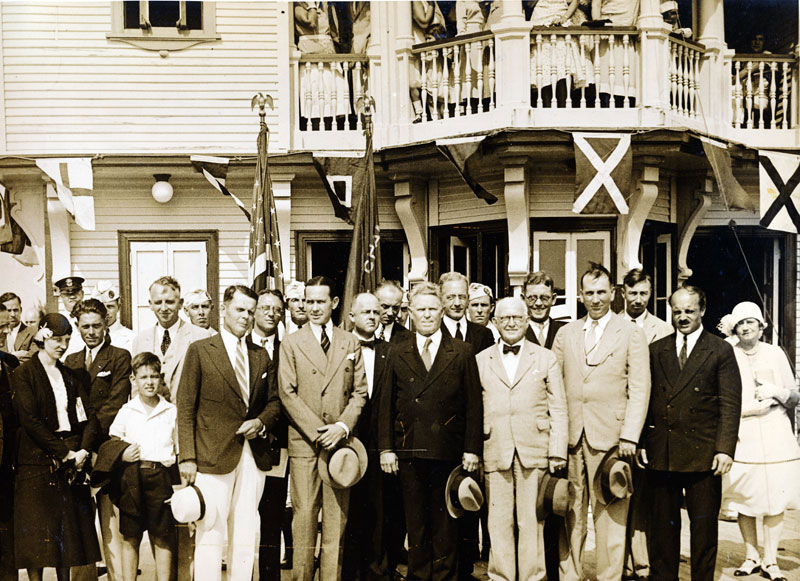 "The remarkable performance of the American Clipper on her maiden flight to South America and the results of operating tests on the Caribbean Clipper met every qualification of the Company's Technical Committee and its Technical Advisor, Colonel Charles A. Lindbergh... On its inaugural flight to South America, the American Clipper set a record for carrying the largest number of persons ever transported in one airliner over an airline in the world, and joined the two continents in a dawn to dusk flight on her return voyage." 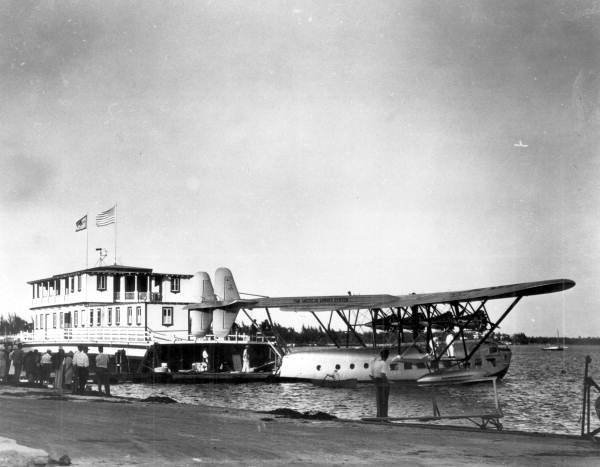 "1931 Marks Big Gain For Pan American -- In conjunction with the progressive extensions and schedules, came the development of new equipment in the form of the largest and most modern airliners ever constructed in the United States, the American Clipper and the Caribbean Clipper.  Development of these craft signalized the first effort toward the development o giant marine planes in this country, the first units in a fleet of mammoth flying boats for service over the international air routes of the United States.

These two super-airliners were ferried down to Miami in the Fall of 1931 and are now in operation over the 251 mile air route between Miami and Havana.  Success of the first two "Clipper" planes has prompted officials of the company to order a third, bringing the total aircraft fleet owned by the Pan American Airways System to 103. "

It made sense to service the flying boats with a floating facility, as it provided a practical way to board the "boats" without regard to tidal action. NYRBA - The New York, Rio, and Buenos Aires Line - had commissioned the construction of a large two-story houseboat to serve as terminal in Havana, and it was towed from there to Miami. It might have been practical, but the houseboat lacked the grandeur that a grand vision demanded. During its short life as an operational airline, NYRBA never got past the practical stage at Dinner Key. The grand vision for Dinner Key would come with the site's next airline tenant.

Pan American Airways was already serving some of the routes served by NYRBA. Starting in late 1927 with a solitary route between Key West and Havana, the airline was flying Fokker Tri-motor aircraft. In January 1929, the terminus was moved north to Miami, using a new land airport a few miles north of Dinner Key. By the following year, Pan Am's routes had expanded rapidly, and connected points around the Caribbean, and had reached the northern littoral of South America. In a partnership with the powerful W.R. Grace Company, Pan Am created Panagra, which flew the length of South America's west coast. But the plans of Pan Am's visionary leader Juan Trippe demanded even greater scope - and one of the key items on the agenda was absorbing NYRBA's route structure down the populous east coast of South America.
The ensuing dramatic struggle between the two airlines was fought out in the halls of official Washington, as well as unpleasant confrontations at remote Amazon refueling stops. But the cataclysmic stock market crash in October 1929 and ensuing economic collapse was the most telling blow to NYRBA, which quickly lost the support of its investors and was absorbed by Pan Am in the summer of 1930.

Along with a group of first-rate airline personnel and a fleet of state-of-the-art aircraft, Pan Am acquired use of Dinner Key from NYRBA. Starting in February 1931, Pan Am began the improvement of the operational facilities: dredging a longer and wider channel for aircraft operations, enlarging the footprint of the base with new land dredged from Biscayne Bay, and construction of new hangars. The site at Dinner Key had superb potential to handle Pan Am's growing fleet of seaplanes.

By February 1, 1932, Pan Am had inaugurated flying boat service to Nassau from Dinner Key. The Caribbean Division and Brazilian Division operated flying boats instead of landplanes, and the 36th St. Airport was being developed into “the main overhaul and repair base of the entire international network” of Pan Am. 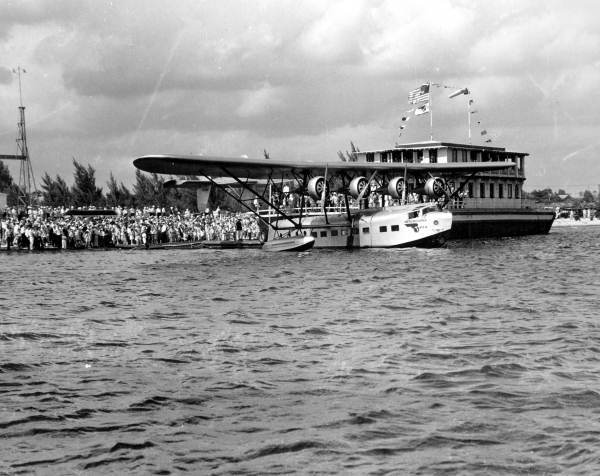